Oh--what a crazy week we had last week!!!!!  We experienced THREE winter storms --and since the temperatures were below freezing ALL WEEK,  all of the different weather we got stayed with us all week... It was totally crazy.  (Be sure and read my UPDATE at the bottom of this post.. It's truly crazy!)

This second storm was my favorite --as you can tell by my picture above... I LOVE Snow---and even though this was not a big snow,  it was a pretty one... Hope you enjoy today's pictures.  Be sure to click on them for enlargements.


Hope you enjoyed today's pictures.  I have one more set from this day--which I will share at a later date.  This 2nd storm of the week was definitely the prettiest we had all week.  Oh --how I love snow,  even in small amounts....

Here's an UPDATE for you:  I should be talking about 11 days of Weather to Remember (instead of just ONE week)... Since I started these posts,  we have had TWO more storm systems go through our area.  Besides the three storms I am reporting on (2/16,  2/18, and 2/21)---we have had two more systems go through (2/23-24 and 2/25-26)....  And the craziest thing about these FIVE STORMS for us is that our temperatures never got much above freezing the entire time.. SO---we still have snow and ice from ALL of them here... Yes---it will be 11 days for us to remember.

My next post will be Part 4 (sunny skies after the snow storm of 2/18)....   As I've said several times,  the best thing to come out of all of these storms was all of the pretty pictures we got. We'll have these memories from this crazy week for a long long time.

I had been complaining about us not having much of a winter here in our area of Tennessee this year----UNTIL this past week...  HA---Mother Nature showed me who is BOSS!!!!!  AND--it's not ME!  All I wanted was a little snow this winter..

The ONE good thing to come out of a week like we had is that we got LOTS of gorgeous photos... I'll share more of them today and in more upcoming posts.

Hope you enjoy some of the pictures I took the day AFTER our ice storm (2/17/15).  Be sure to click on the pictures for enlargements.

The morning after the Ice Storm,  our community sent out emails telling people NOT to go out due to the horribly slick roads.  The community was busy cleaning up branches and downed trees first before they could 'tackle' the roads--trying to clean them off some.  BUT--the ice really was the worst thing we could have had...   Needless to say,  George and I did NOT go anywhere that day!  We did enjoy taking pictures --so I hope you enjoyed them  today.....

Remember also that along with this ice/sleet/freezing rain/snow,  we had extremely frigid temperatures ALL WEEK.  We were below zero  (F) a couple of days --and one day the HIGH temperature was only about 10 degrees... From Monday,  Feb. 16, until Saturday, Feb. 21----we were below freezing the ENTIRE time.  SO---any ICE or SNOW we got all week just stayed with us the entire week... NOTHING melted --even when the sun came out... Crazy!!!!!

On Monday,  Feb. 16, 2015,  we thought we were going to get a very nice snow storm.. However,  that didn't happen... Even though our temperatures were below freezing all day long,  a warm wind aloft came from the south ---and what did we get instead of snow????  We had an ICE STORM.... Yipes!!!!!  The weather people called it everything from ice pellets to freezing rain to sleet.... Whatever it was,  we had almost an inch of ice all over our yard!  Everything glistened and turned white....It was WEIRD...  (Not sure I have ever seen this much ice at one time --at least not here.)

George,  who doesn't like snow,  said that he'd much rather have a foot of snow than an inch of ice..... We were concerned that we would lose our electricity ---but luckily,  that didn't happen.   We did lose our satellite dish (DirecTV) due to the ice for awhile ---so George had to get the hairdryer out and blow the ice off of the dish....(That worked!!!!)

We put our bird feeders out at 7 a.m. before the storm began... I was SO glad I had some food for those sweet little chilled birds... It's so sad to see them (any of the outdoor critters) during weather like this... The poor little birds were at the feeders most all day long... Poor Babies!


Since we have a lot of trees around our yard,  we were concerned that some limbs would break... Luckily,  other than a few small limbs---we didn't have any damage.

But--our wonderful Rhododendron near our deck is struggling and 'bending over'.... Hope the limbs don't totally break... I love that big bush. Many trees and bushes in our area have either broken or are damaged... SAD!


SO--what did I do all day on Monday??? WELL---I took pictures and shared them with many friends on Facebook... I did other computer work --such as blogging.  Neither George nor I went outside other than on the deck to put up and then take down the bird feeders. George also worked on the satellite dish from the deck.  I did not go outside ---and decided not to go out at all... All I needed to do was to re-injure that bum knee (which is gradually healing). Yipes!   SO----I was a good girl and took all of my pictures from inside!!!!

That night, we also sat by a warm fire and ate a big bowl of home-made CHILI for dinner....  How's that for my first post from this crazy week,  dealing with this weather????   Guess it could have been MUCH worse though--so we are thankful.

The good news for us is that we truly were lucky---compared to many others in Tennessee (and other areas).  Tennessee was under a state of emergency with lots of trees down,  power lines down and power out for many,  etc....  SO,  even though we were lucky, to tell you the truth,  this was NOT FUN.

ALL of these pictures were taken on Sunday and Monday (Feb. 15 and 16, 2015)...The top two were taken on Sunday --before the storm, when I was outside.    WELL--this is only PART ONE of our "Weather Week to Remember".... I will share more pictures and posts upcoming...  We have had a week of Ice, Sleet,  Freezing Rain,  Snow (yes,  we finally got some snow on Wednesday),  a tiny bit of sunshine,  AND frigid temperatures all week....

AND--the forecasters are predicting another ICE STORM possibility on Friday/Saturday for US... That will be Storm Number Three just this week.  I hope they are WRONG about the ICE....

Hope you are all okay wherever you are.  As bad as this has been for Tennessee,  there are areas around our country/world that are having MUCH WORSE weather than we are having.  Prayers and thoughts for ALL.

Hope ALL of you had a great VALENTINE's WEEKEND...  My theme this month is to share the LOVE --so whatever you did and wherever you went,  I hope there was A LOT of LOVE shared!!!!

George and I shared our LOVE by taking a short trip to the SMOKIES for a couple of days... As you can imagine,  we took PLENTY of pictures to show you... SO--today I'll share with you just one small piece of our trip...

Our weather for these two days was cold and snowy ---but where we were,  there wasn't much snow (even though I LOVED seeing even a small amount)...  HOWEVER,  on the tops of the mountains,  they had LOTS of snow that day (2/12).  In fact, there was so much snow,  the main road across the mountain (Highway 441) was closed...  SO--we took our pictures from below.

Hope you enjoy the pictures... Please click on them for enlargements.. 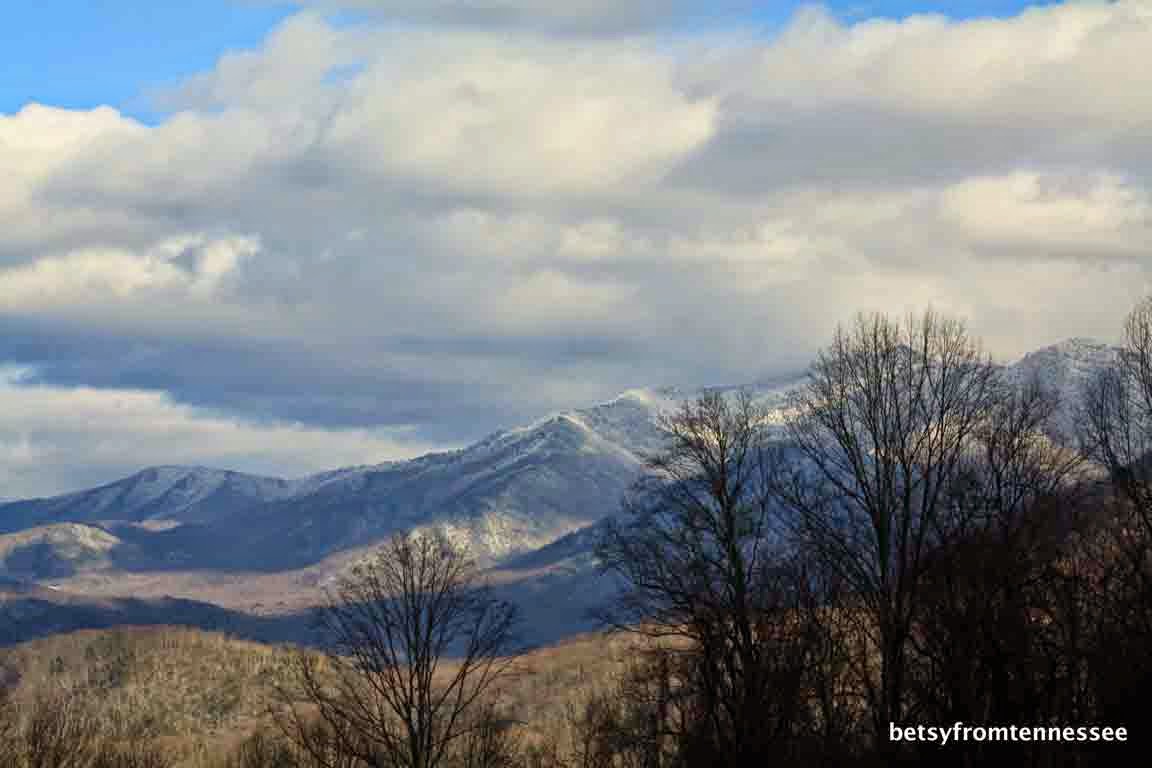 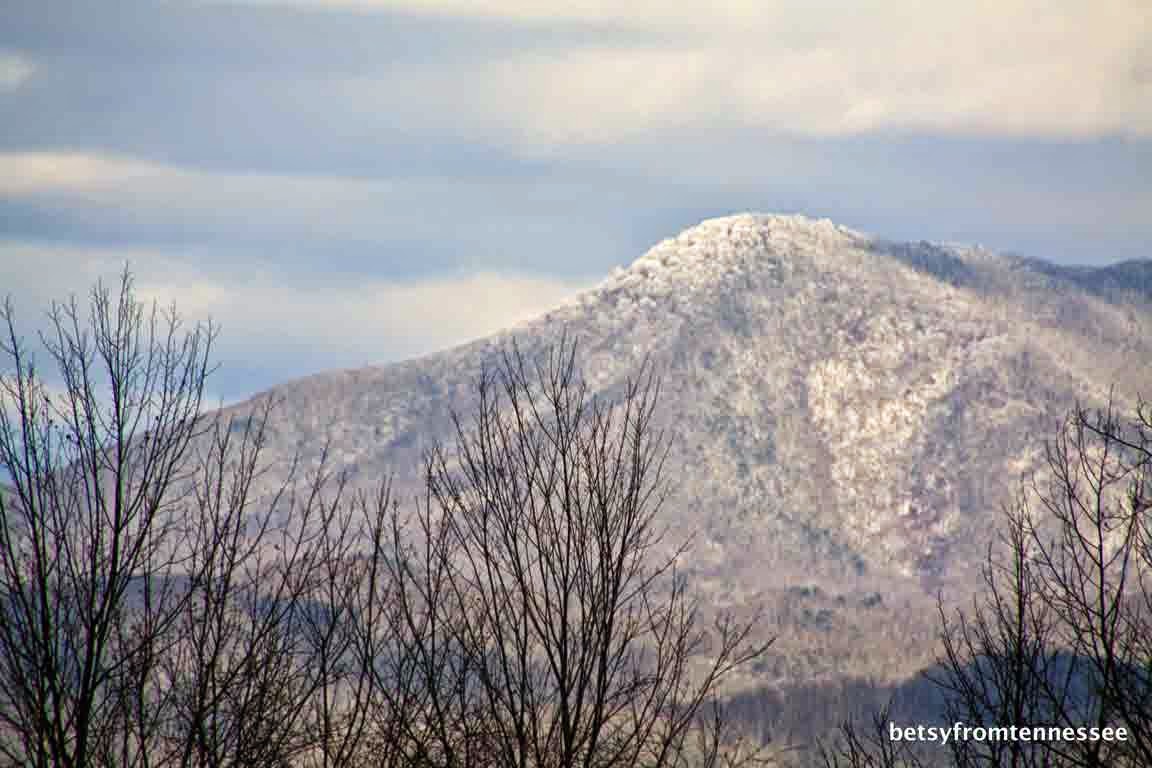 Do you have a favorite from this group?????  I had a hard time just choosing this particular set since the entire area was so beautiful to try to capture... This was another one of those,  "in the right place at the right time"  moments. I guess my fav is the top one and the 4th from the bottom (for a close-up)....  YOU?

Have a great week.  We are in the midst of some nasty weather here in Tennessee... We thought we were going to get some snow (would have been exciting for me)---but with that possibility also comes something very dangerous (ICE,  SLEET,  FREEZING RAIN).... GADS---nobody needs that... My husband doesn't like snow--but says he would rather have A LOT of SNOW rather than an ICE STORM.  AND--there are many other friends having terrible weather also.  Prayers for our area and for all others who are experiencing this nasty stuff and who have to be out in it.