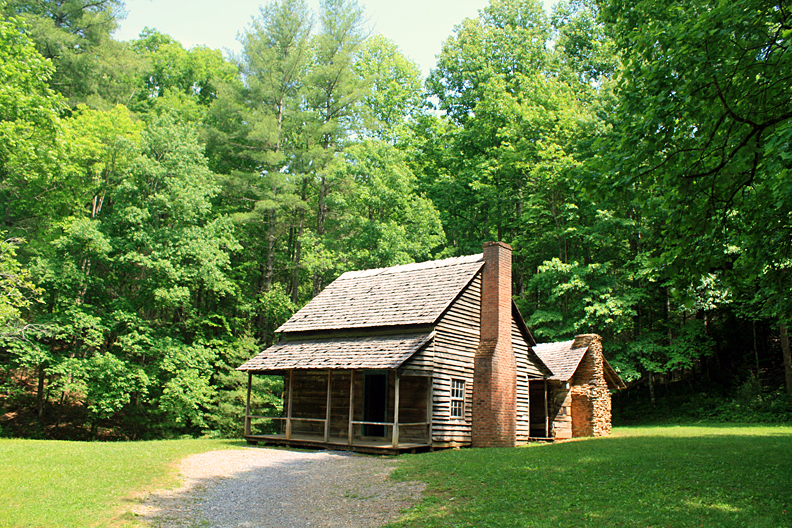 Now---take off your cowboy boots and let's leave the 'west' for today.... I'm taking you back to my area and one of my favorite places,  Cades Cove--in the Smoky Mountains.

On May 23, 2011,  George and I took a day-trip to the Smokies.  We went through Cades Cove and then rode across Parson's Branch Road.   You probably remember my June blogs talking about our 'crazy' trip on that rough road.   IF you missed any of those posts,  you can go to my sidebar,  scroll down to labels and click on CADES COVE 2011.

Today,  I will show you another cabin we visited that day near the Cades Cove Loop Road --entitled the Henry Whitehead Cabin...  Above is a picture of the cabin,  found in the Chestnut Flats area of Cades Cove.  Below are more. 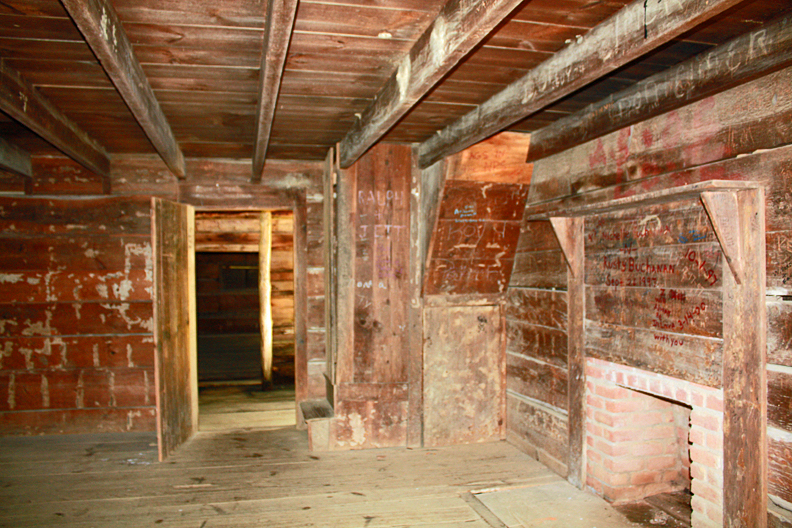 When we post pictures of old homes and cabins,  many of you ask to see the inside.  SO---here is what the inside of the Henry Whitehead Cabin looks like now. Don't you just hate to see it when people scribble graffiti in places like this... GADS!!!! 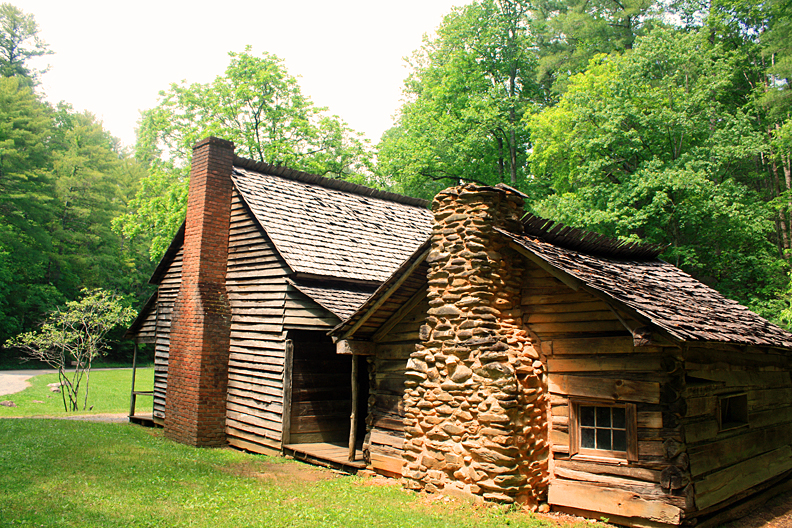 Here is a picture of the side of the house.  Can you tell that this used to be TWO different cabins??????  Seems as if Matilda (Aunt Tildy) Shields married Henry Whitehead after her first husband ran off... (Shame on him!)...  Henry built the front portion, which was Aunt Tildy's DREAM HOME,  in 1895.

Note the brick chimney in the 'newer' cabin.  That brick chimney was unheard of in  this area at the time.  This structure might be called the ultimate log cabin,  or sometimes called a 'transition house' due to its near-perfect construction from logs sawed straight and flat at a nearby mill.  Soon the mill-sawed lumber would replace log cabins with frame construction.  By the way though,  this is the only cabin built like this still standing today in the Smokies.

SO---what about the little cabin in back, you ask???????   Well---when Aunt Tildy's first husband left her (shame on him)---her brothers quickly built this cabin for Tildy to live in. .  I love seeing the old stone-rubble chimney.   Miss Tildy lived in that little cabin until Henry courted and married her----and then built her Smoky Mountain Dream Home!!! 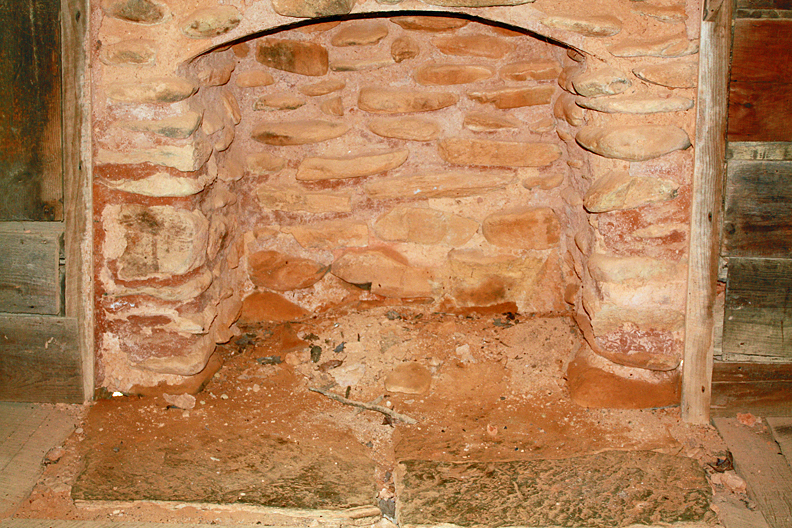 Here is a picture of the old fireplace --from the inside... Neat, huh? 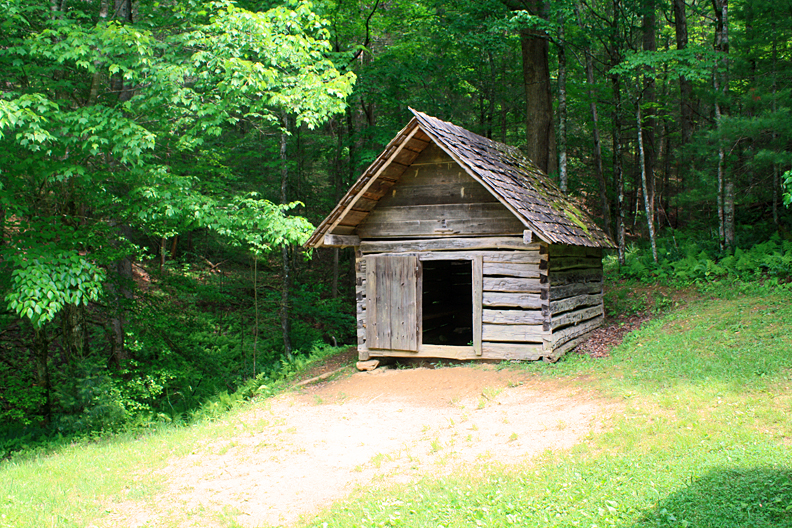 This little building out back of the cabin was their corn crib.  Wonder if there were any snakes inside there????? We didn't check it out --for some reason!!! ha 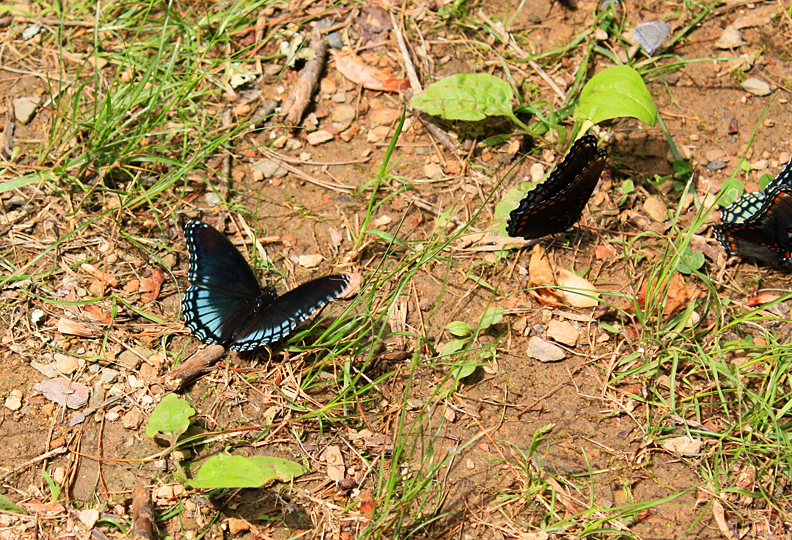 While walking around the yard at the Whitehead Cabin,  I noticed a group of butterflies on the ground ---so knowing me,  I just HAD to take a picture... Some of you butterfly people will need to tell me what these are..  All I know is that they are 'purdy'... 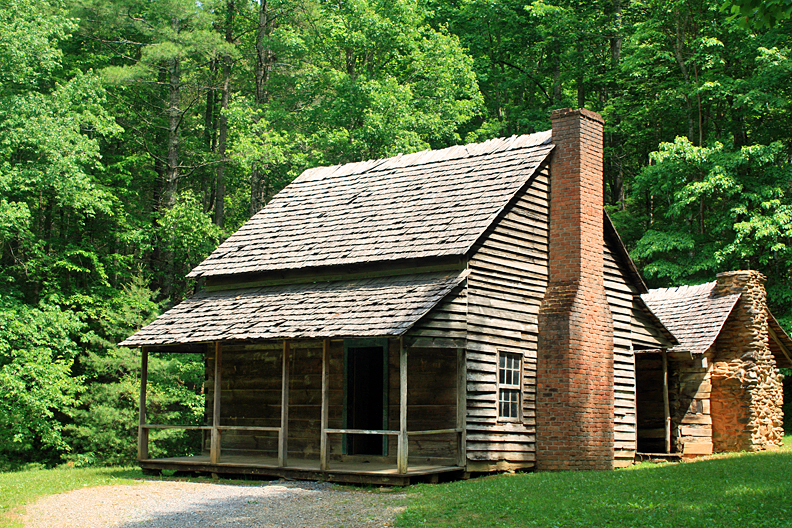 Finally,  here is one more picture of the Henry Whitehead Cabin for you... WE enjoyed visiting Aunt Tildy's first home --and then her 'dream' home....  Sounds like she did well the 2nd time around when it comes to husbands.

By the way,  some trivia for you (which I'm sure you want to know):  Aunt Tildy's son from her FIRST marriage became one of the prominent producers of moonshine in Cades Cove during the Prohibition.... (Just knew you wanted to know that!!!!)

Have a great day, and mark your calendars now:  Don't miss my blog on Friday this week... It's a favorite of mine....
Hugs,