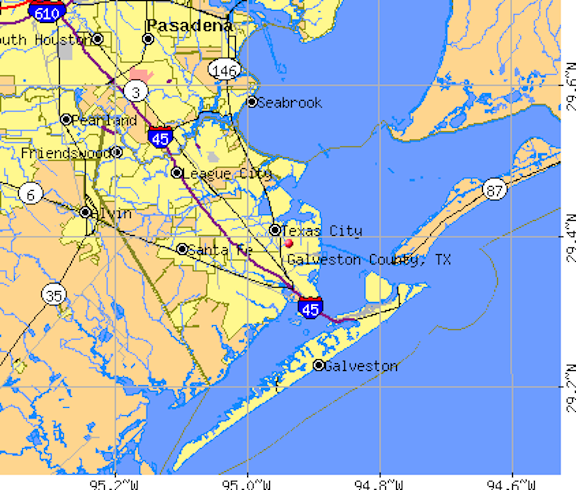 If you missed Part I of our visit to Galveston, Texas,  click HERE.   Today,  I'll share some more of our visit that glorious day.   I was surprised at some of the comments from Part I  saying that so many people have never heard of Galveston and didn't have any idea that it was on an island... It is truly a neat place ---and other than the worry of hurricanes,  it is a fantastic place to live and to visit.

Most of this post is about and for BIRDERS... Galveston is one of the top places for birding in the United States.  Many birders come to Galveston looking for the Reddish Egret,  which is only found in a few places.... There  are many online sites talking about birding in Galveston.  I marked three for you:  HERE and HERE  and HERE.

I love my backyard birds but truly don't know much about shore birds. I do know that my eldest son --who lives in the Galveston area--- has become a real birder and knows alot about the birds in his area.  We were only there for a few hours,  but I got to see several 'new to me' birds....  Since my pictures are not too good in spots (too far away plus having to crop them),  I am enclosing some other pictures from the internet also --so that you can see how gorgeous these birds really are. 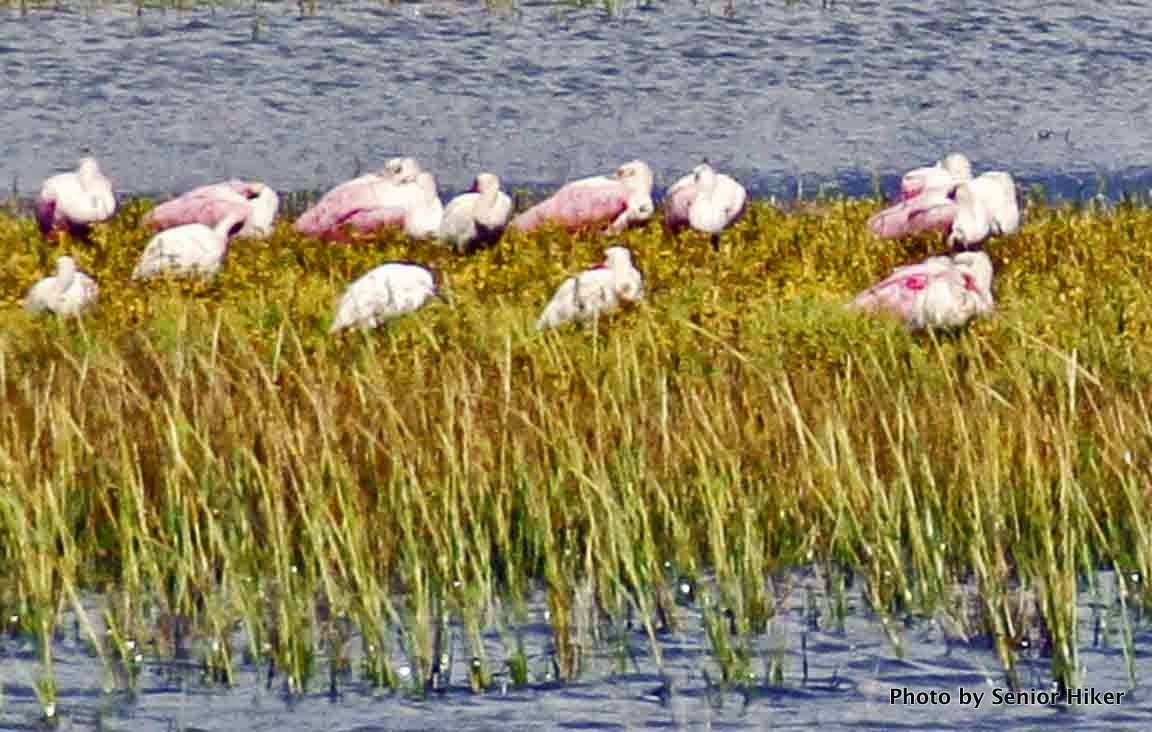 First were the ROSEATE SPOONBILLS.   Wow --what gorgeous birds.  Wish I could have seen them closer and not sleeping!!!  Bert (son) raved and raved about these beauties --which were not far from where he lives.... 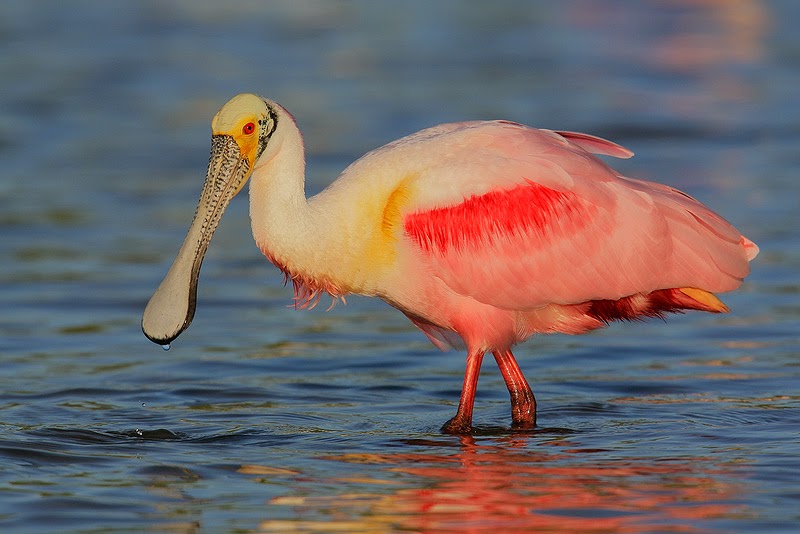 This  is what I wish I had seen instead of them taking their morning naps!!!!! ha  (Photo from the internet) 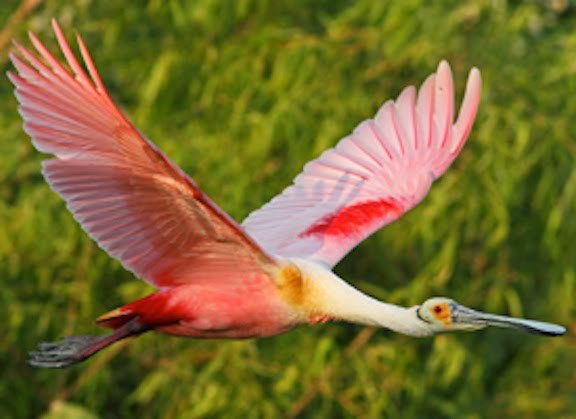 OR-- wouldn't it have been fantastic to see THIS????? Wow--one of the most beautiful birds I think I have ever seen.  (Photo from the internet) 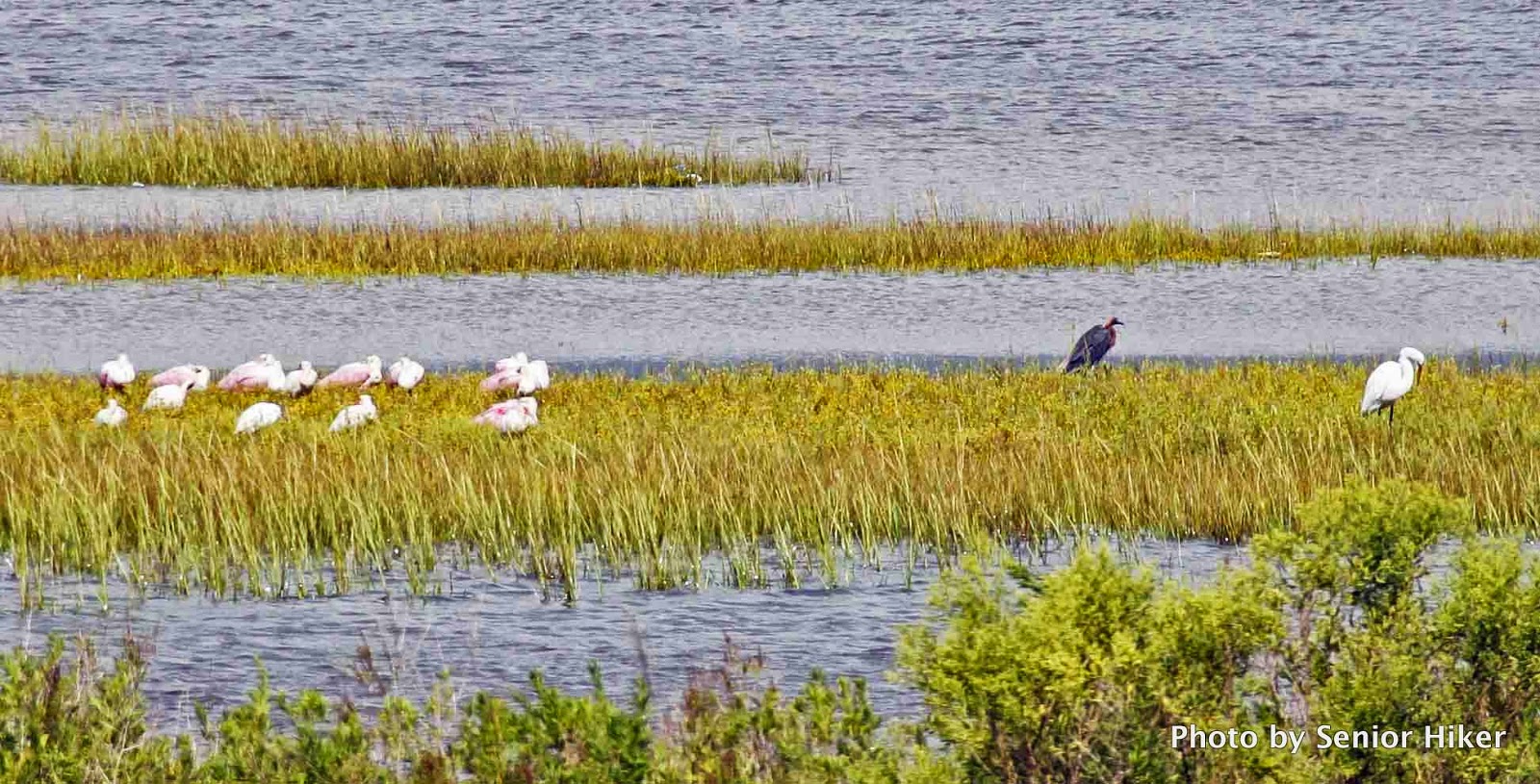 This is another picture (not cropped) of the Spoonbills --but it also shows a couple more birds,  a Great Egret (white one) and a Tri-colored Heron (darker one)....  What a great place for birds to enjoy!!!! 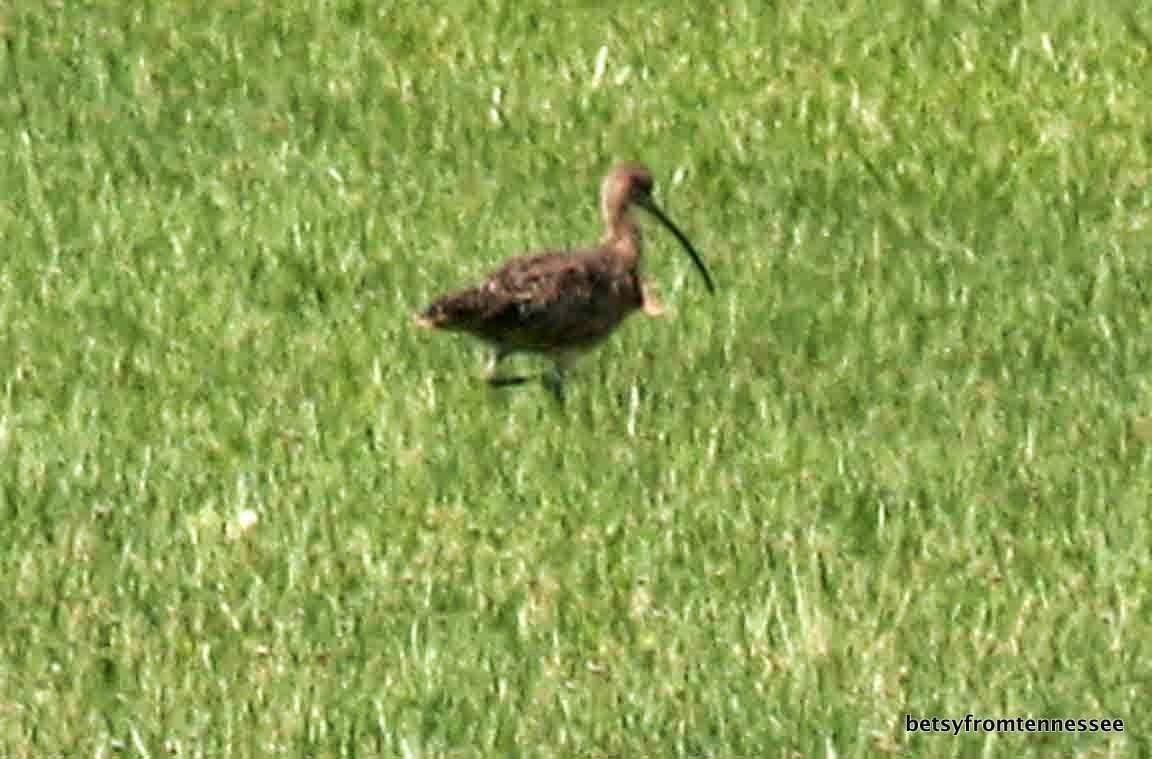 When we were riding around Bert's resort,  he saw a LONG-BILLED CURLEW...  I jumped out of the cart and tried to get a picture.  But--he kept running away from me.  This is the best I could do!!!!  Look at that bill!!!!!! 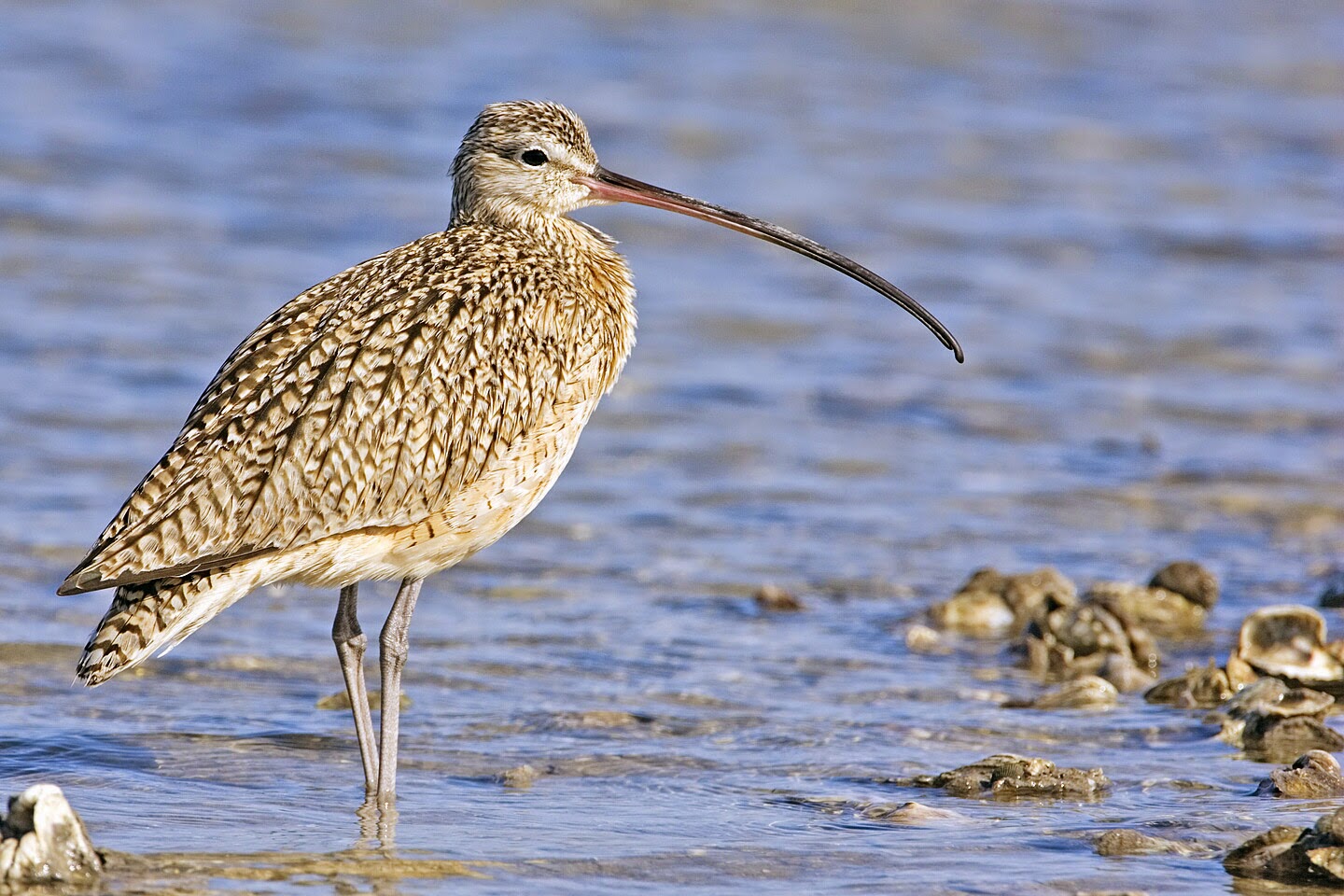 Here's another photo (from the internet) of the Long-billed Curlew.  Beautiful birds, aren't they?

As we kept riding around the area on the golf cart,  I also saw an immature BLUE HERON.  I have seen Blue Herons before --but it was fun seeing one in Texas. 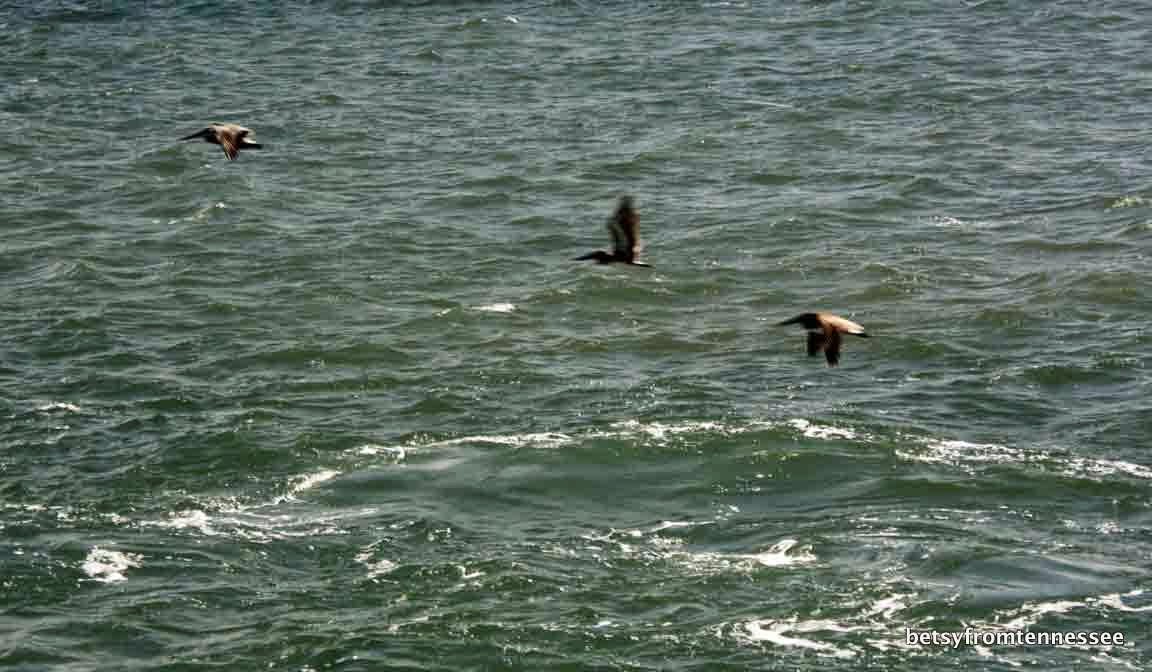 Later,  while we were riding the ferry across Galveston Bay toward the Bolivar Peninsular,  I enjoyed watching lots of birds following the ferry.  There were several different birds around including PELICANS. 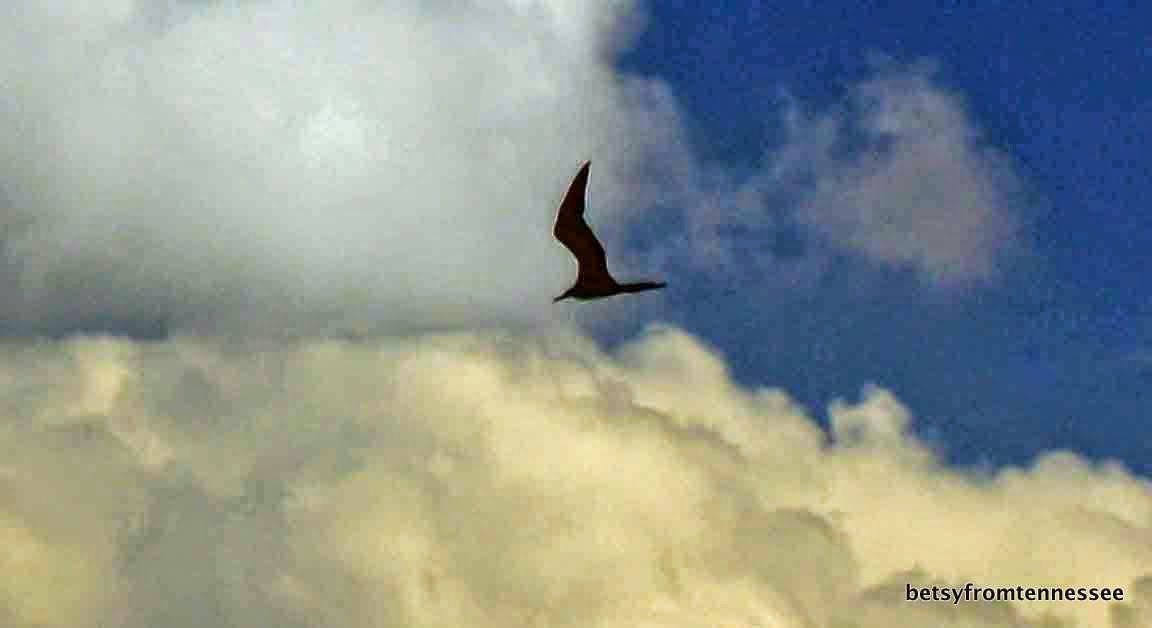 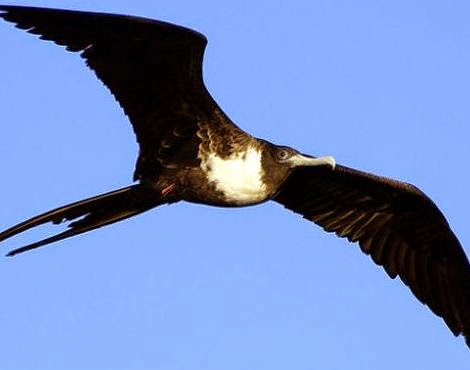 Here  is a picture of a female Magnificent Frigate Bird  (from the internet). 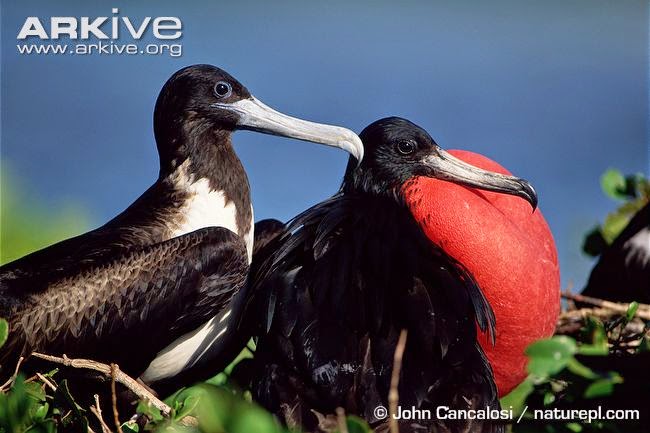 AND,  here's another one from the internet showing the female and a male Frigate Bird (which has a red neck) ----'blowing' himself up to get the female's attention!!!!!  Wonder if he will POP?????? ha ha

IF you want more information about any of these special birds,  there are quite a few sites on the internet.  One I chose for you today is All About Birds.  Click HERE for any info you are looking for when checking out birds. 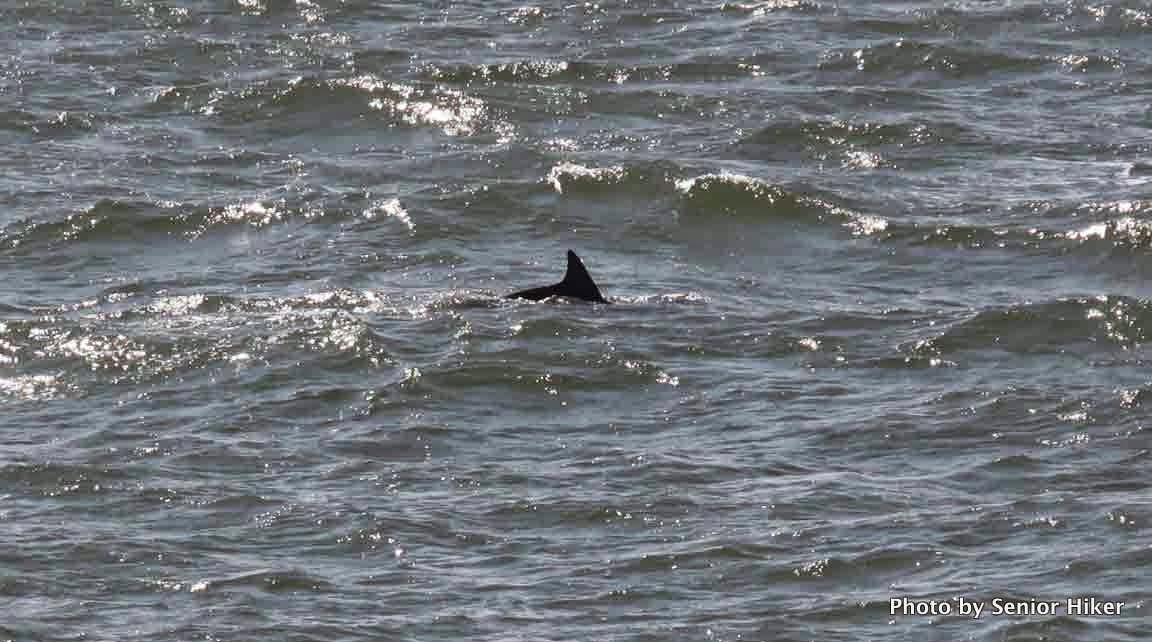 Back to the ferry,  another area of excitement for me during that day was seeing the DOLPHINS.  They jumped in and out of the water ---but neither George nor I could catch a picture of them totally ABOVE the water.... ha 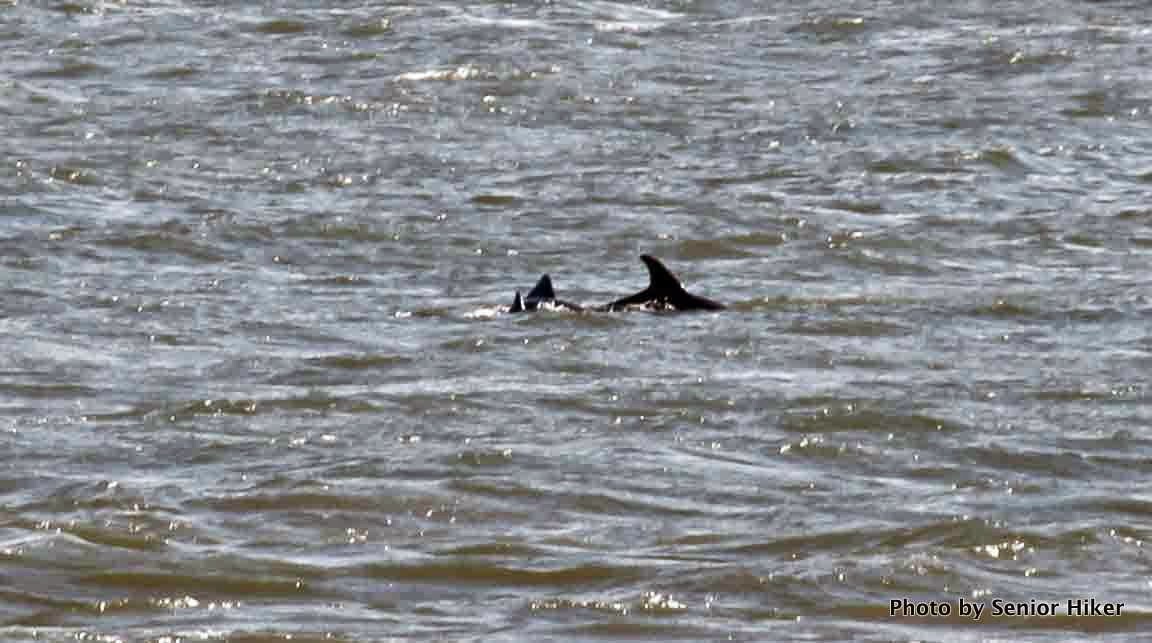 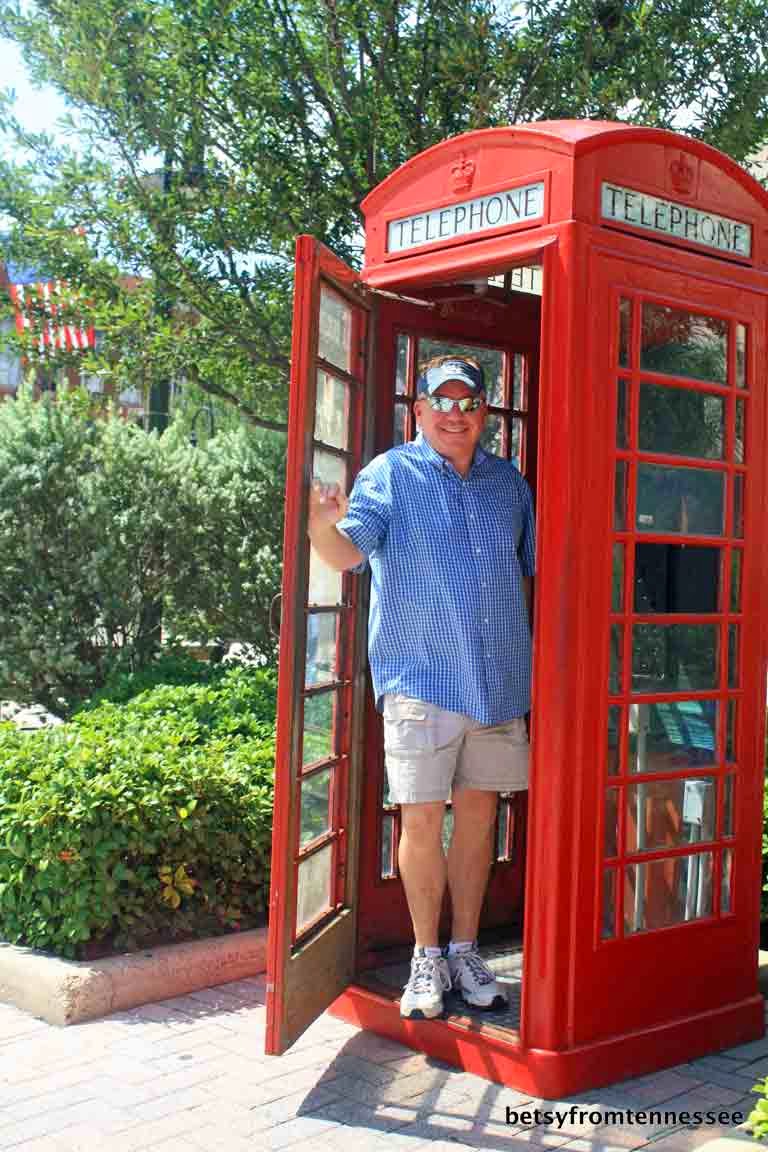 OKAY---for all of you who are not interested in Birds or Dolphins,   I have four more cute pictures taken when we were wandering around the STRAND in Galveston that afternoon.    First, I took a picture of son Mark in an old telephone booth... 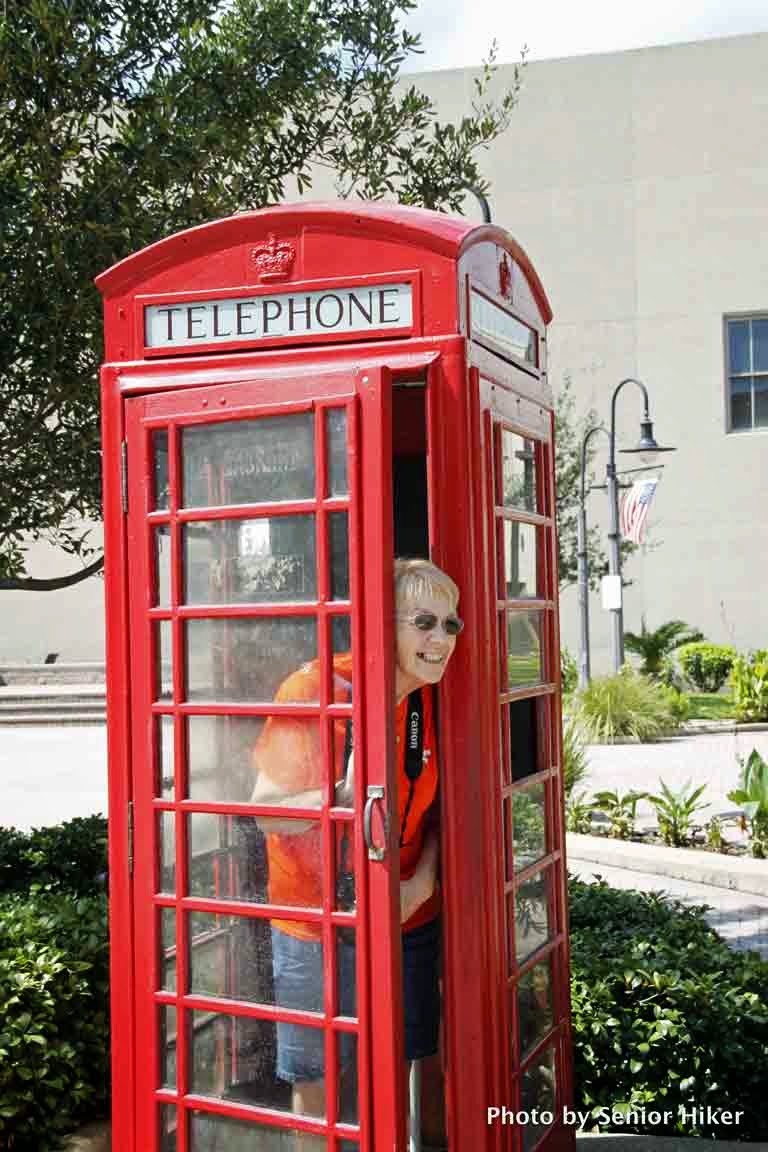 Then,  George just had to take one of me in that telephone booth... By the way,  that door was heavy... Maybe George wanted me to STAY in that booth for awhile... ha ha

More Info:  Do you see the crown  above the word TELEPHONE?????  That means that this was a British Telephone Booth.... Bet my British Blog Friends will know something about this booth....


Finally here are two cute shots of George and me ---while visiting a HALLOWEEN Shop on the Strand.... 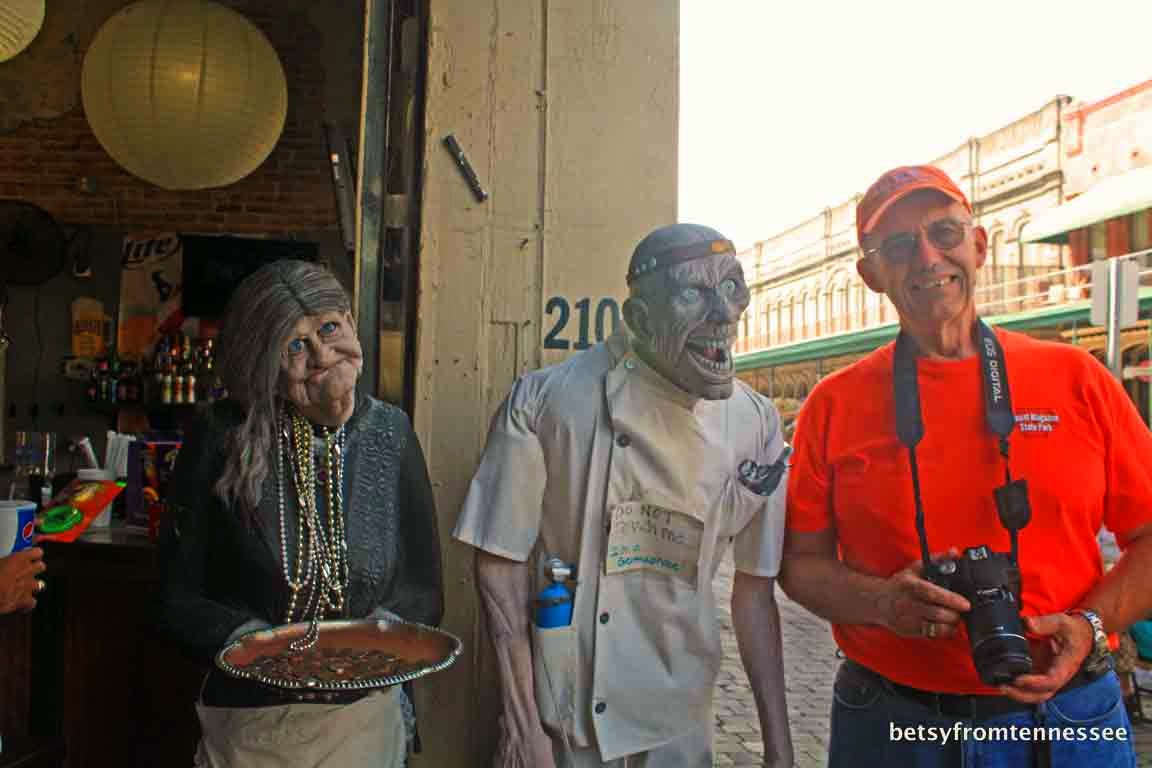 George seems to be having a conversation with a couple of Cutie Pies!!!!  Ya think???? 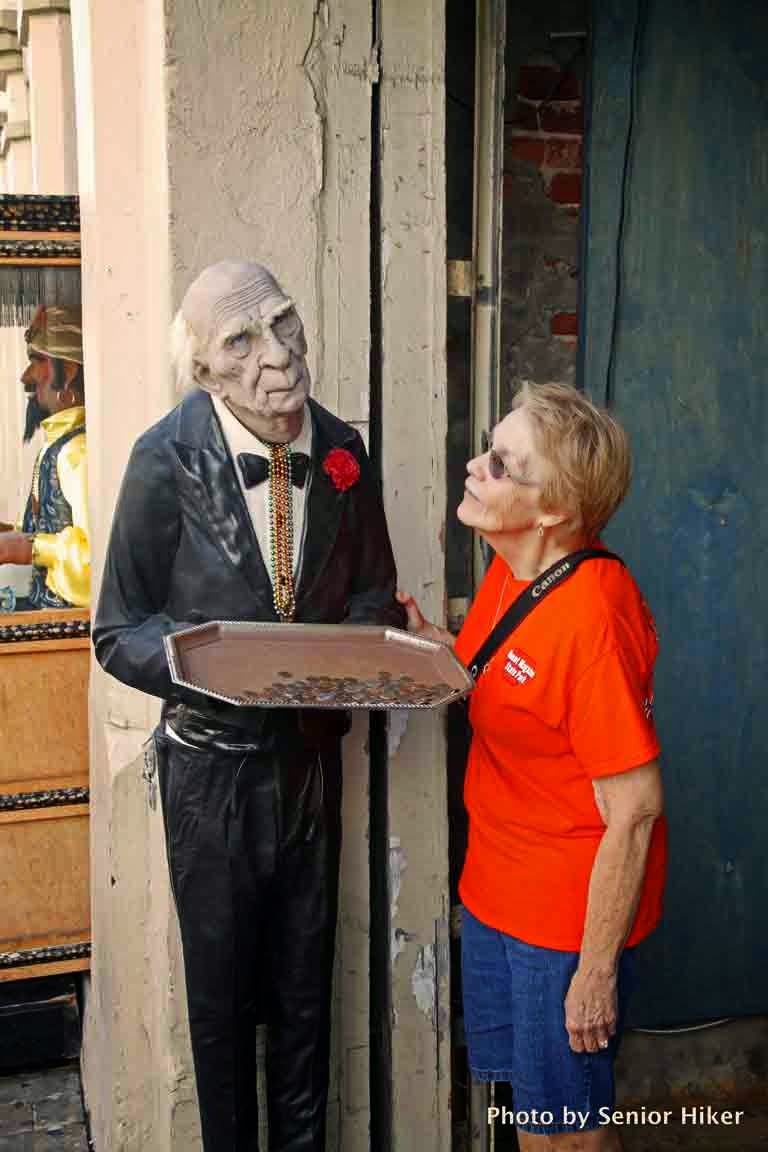 I was trying to have a conversation with this guy --but he wouldn't talk to me... (A little boy walked by at this time, and gave me a strange look....  I looked at him and said:  "This man won't talk to me."  The boy's eyes got big,  and he ran back over to his mother probably telling Mama about this strange old lady!!!!!! ha ha) 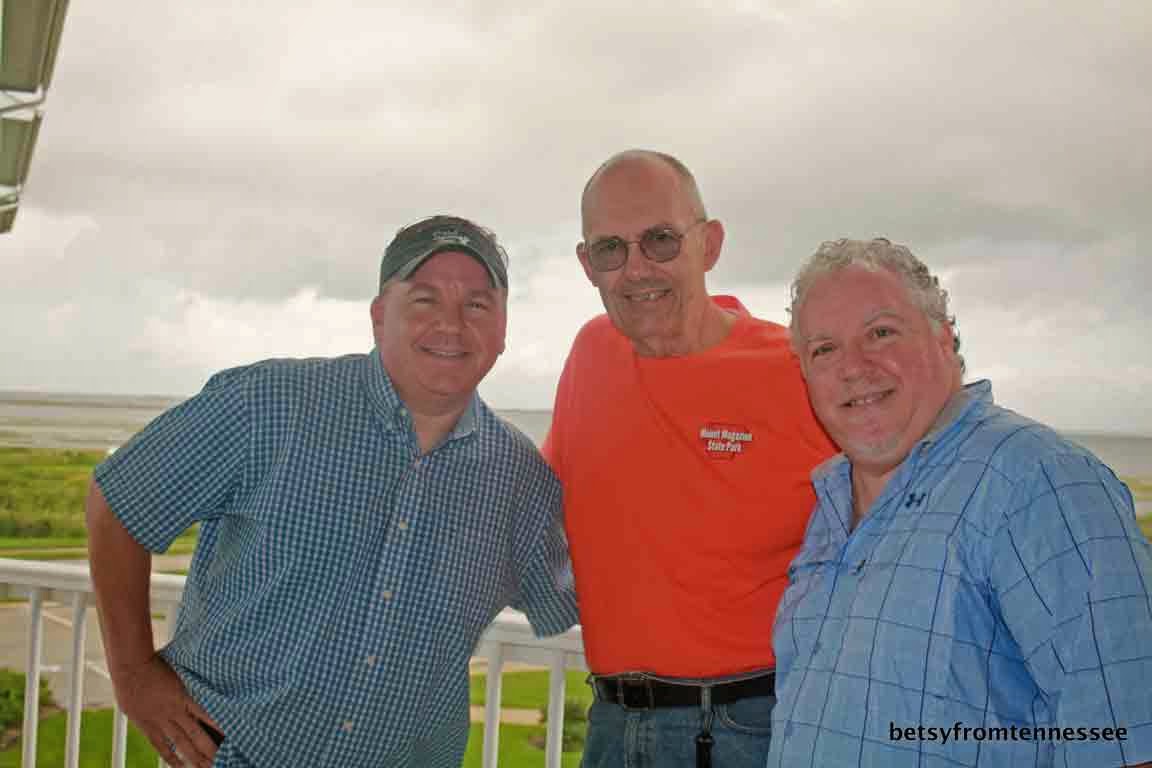 I'll  finish my posts from Galveston, Texas by sharing one last picture of my THREE GUYS:  Son Mark,  Sweetheart George,  and Son Bert.   (photo taken from the balcony at Bert's condo)

Hope you have a wonderful day.  We are in for some cold weather on Saturday --with a low of  26 degrees F  and a high of 42 degrees.  We also 'might' have some snow showers....  Wooooo--welcome to winter...  (Think I wanted to enjoy Fall a little more--although I do LOVE snow!!! ha)