I met NEAL about 5 years ago through blogging.  We became friends almost immediately.  Part of the reason was our love for the area of the country where we were both born and raised.  Neal was born and raised in Cumberland Gap, Tennessee and I was born and raise several miles east of there in Big Stone Gap, Virginia.

When the four of us (Neal, his beautiful wife, Patti, George and I)  met this year,  we stayed at Pine Mountain State Park in Pineville,  Kentucky ---which is close to Cumberland Gap.   SO--while in that area,  Neal took us around the area of his homeplace.

Also--while there,  we drove to Kingdom Come State Park one day,  and since it was so close to my hometown,  we visited that area also...  I loved hearing the stories about his childhood which Neal shared.  AND--I loved telling my own stories about my childhood.  As you can imagine,  we had a GREAT week together.

Today I'll share with you some photos from both of our childhood home areas beginning with mine,  which we visited on Tuesday,  10/23/13.  Be sure to click on the photos to enlarge them.

Above is my childhood home --right after it was built about 1941.  I lived there until after high school  days (after 1960)...  I loved that little home ---and the one thing I loved about it was watching all of the spruce, hemlock, boxwoods and big trees/shrubs grow and grow--through the years... The yard was very woodsy---which I loved.

After my Dad died in 1969,  Mom kept the house for a few more years... Sometime in the '70's,  she sold it (much to my disappointment--although I understood). She stayed in Big Stone Gap for several more years in a small home she had purchased... Later, she moved to Florida to be closer to my brothers.  I then had and still have no more close relatives (other than some cousins) living there.  But---it will always be HOME to me!

The people who first bought the home from my mother (it was sold again later to another couple)  made two big changes:  They put bright yellow siding on the house AND they cut down most of the beautiful old trees and shrubs....I was sad to hear that!

Here is what 'my' home looks like NOW.  They have added on (porches, rooms, etc.) ---so the house really is hard to even recognize these days.   I was telling George that I have 'mixed feelings' about seeing my home now...   I'm sad that it looks so different --but I'm also happy that someone loves it and is taking good care of it!


George took this photo of me standing near the front of my childhood home.  The front door is the SAME ---so I was glad to see it!!!!  If you look back at the first photo,  you can see the door.  Ah--the memories!!


This is taken from the backyard.  Again,  it is VERY different---but that little garage (right side of the photo) is still there!! That garage was only large enough for one car --and not a big one!!!!! ha


Besides seeing the family home,  we also visited the graves of my family members... I am the LAST person left in that immediate family.   My parents, both brothers and one sister-in-law are buried in that cemetery..


George took this picture of me --as I sadly looked at the individual grave markers of my family members who are buried there.  From left to right: brother, Raymond;  sister-in-law, Evelyn;  Dad, Simon;  Mother, Edith; and brother, Jimmy.

The family still owns the property where his home was ---which is hidden up a dirt road back in a holler.... I kept telling Neal when we were at that property that he needs to build a little cabin there.  I would visit him there --and would love that privacy, as that area is surrounded by mountains all around!  FABULOUS!!!

Above is a picture of all that is left of Neal's childhood home.  I have seen photos of this chimney on Neal's blog ---and was thrilled to get to see the area in person. 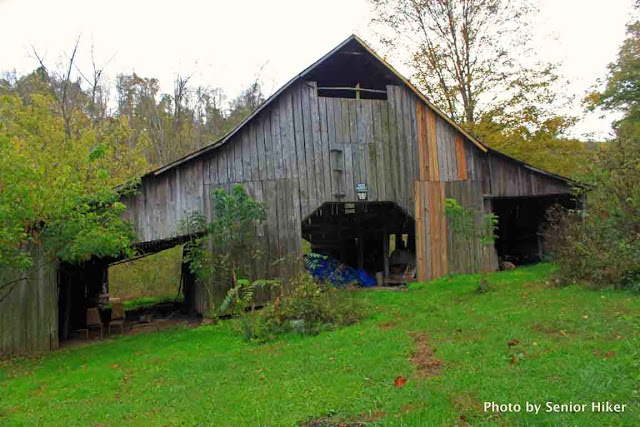 This barn belongs to a neighbor (whom we met while there).  He recently bought the property, and is in the process of fixing up the old barn.  Neal's sister,  ROSE,  is also a special blog friend of mine.  She loves to write stories of their childhood---and some of Rose's favorite things to photograph are old barns.  She has featured this old barn several times ---so I'm sure she will be glad to see that the new owner is  renovating the barn --and wants to keep it in good shape.  (Click on Rose's name above to see her blog.)


I loved listening to Neal tell his stories about his home and his childhood.  His Dad was disabled and the family struggled financially.  BUT--Neal remembers all of the good times they had --not the struggles!!!!!


Besides checking out the property where Neal's childhood home was,  we also checked out the cemetery where his parents (and some other family members) were buried.


Here is another barn  (which Neal and Rose-his sister, have made 'famous' on their blogs).   The power lines were in the way when I took the photo--but I used my 'zapper' to get rid of them!!!! Isn't that a neat barn???  I'm sure that Rose will enjoy seeing this photo!!


Here is one last photo showing Neal at his homeplace.  Wish you all could hear some of his stories telling about his life growing up in Cumberland Gap, TN.  They are SO interesting!!!!!  I truly enjoyed visiting the area where our good friend grew up....

Hope you enjoyed seeing photos showing both of our childhood homes.  As you can imagine,  we all had a wonderful week together.

Be sure to check out my Photo Blog for a great picture of Autumn on the Cumberland Plateau.. Click HERE.