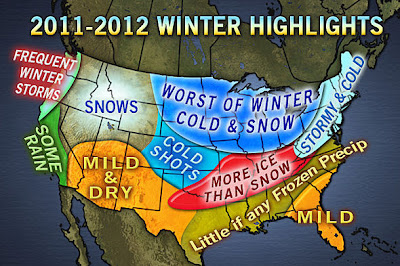 Every year, in our local paper,  one of the 'old-timers' in our area (Melinda Lane Hedgecoth) predicts what our winter will be here on the Cumberland Plateau in Tennessee.  Melinda is actually the daughter of the woman who used to make these predictions.. Melinda's mother is no longer alive,  so Melinda has carried on the tradition.  Melinda (and other Crab Orchard Old-Timers around this area) use NATURE when making their predictions.  AND --to be honest,  these folks (like those in the Old Farmers' Almanac) are usually more accurate than the professional weather people.

Here are some of the predictions for us this winter:
--We won't have as harsh a winter this year as we did last,  due to the fact that there are very few wooly worms in our area this fall.
--Only FOUR early morning fogs were seen in our area in August,  with only one of them being very heavy;  That means that we'll  only have four snows this winter --with only one of them heavy.
--Our lack of a large mast crop this Fall is another indicator of a milder winter.
--HOWEVER,  the cornhusks were thick this year --which indicates a harsh winter.....
--The evidence of a lot of spider webs indicates that whatever winter weather we get will be mainly in the form of ICE (Yuk) and will be very cold but with minimal snow.

Harsh weather usually falls around the changing of the moon phase and any snow that falls on a full moon usually melts off fast.  But---if it falls on a new moon,  it usually will hang on for a few days,  spawning the additional predictor of  "if a snow hangs on for several days,  it's usually waiting around on another one"----meaning there'll soon be another snow.

Melinda said that her Mama always said that her Dad told her that winter was never officially over until after Easter (April 8, 2012).   SO----she told us to button up our overcoats and stay warm for what could be a cold, perhaps icy,  yet milder winter than last year.

What is the weather going to be in your area?  Looks like the north is in for a very harsh winter...

Have a wonderful day.
Hugs,
Betsy
Posted by Betsy Banks Adams at 4:00 AM 67 comments: