Chapel on the Rock, Colorado 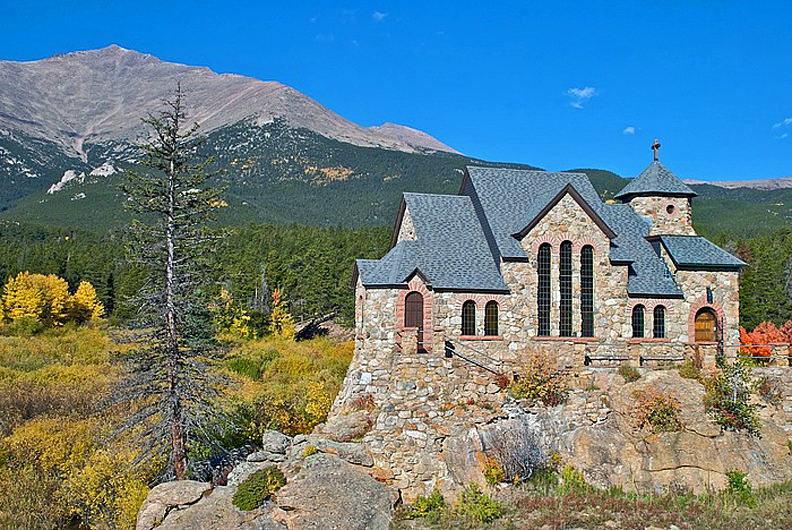 While we were on YET another scenic road during our western trip in June (Scenic Highway 7, Colorado),  we passed by one of the neatest little churches ---and of course,  I shreaked--and made George turn around to get some pictures!!!  Isn't he nice??????? (He'd say 'hen-pecked'--ha)


We were south of Estes Park --on our way toward Boulder, and came to a little town  (hole in the road) named Allenspark, CO.   On the side of the road sat a gorgeous little rock church.  AND--there was a wedding going on that afternoon!!!!!   Holy Cow---I was ready to attend... WELL---since I was wearing shorts and a t-shirt,  I'm not sure they would have let us in.  BUT--we could at least drive around and get some pictures.  That's what any good photographer would do!!!!! Right????

We didn't even know the name of this church ---but thanks to the wonderful internet,  I was able to find out all kinds of great info.  Seems as if there is a Catholic Camp nearby (Camp St. Malo).  The founder of that camp,  Monsignor Joseph Bosetti had the idea of bulding a chapel on the site.  In 1916 he and two friends observed a falling meteor during the night and in his search for the remnants the next morning,  he came across a large rock.  The beauty of the land inspired the priest and he remembered Jesus' words to Peter: "Upon this rock,  I will build my Church". (Matthew 16:18).

Bosetti prayed for 20 yrs. for funds to build the chapel.  During that time,  he found himself in a battle with the Colorado Highway Department which had plans to dynamite the enormous piece of granite to both widen and straighten the curve in the road.  Eventually Msgr. Bosetti won the battle and years later,  when the chapel became a reality, it was reported that a group of engineers who laid out the road came to the dedication and thanked him for his perseverance.

The chapel was designed by Denver architect Jacques Benedict.  The Malo family donated the funds for the building of the chapel and paid for its maintenance for decades.  The chapel was dedicated by Archbishop Urban Vehr in 1936.  It's name is St. Catherine of Siena---but is known as the Chapel on the Rock.  The picture above---taken from the internet --shows how they built this chapel on that huge rock... Amazing, huh?????


In 1993,  Pope John Paul II visited the chapel during his trip to Denver for the World Youth Day and bestowed his personal blessing on the chapel.  Over the years,  thousands of visitors have stopped as it is framed against majestic Mt. Meeker.  In 1999,  Boulder County designated the chapel as a historic site.  The Chapel on the Rock is truly a Colorado landmark.  I am SO glad we found it and took pictures that day.

Hope you enjoy my pictures.  All are mine except the first one (I wanted to show you the ROCK).  Hope you enjoy seeing this adorable little chapel... Wouldn't it be SUPER to have a wedding there? 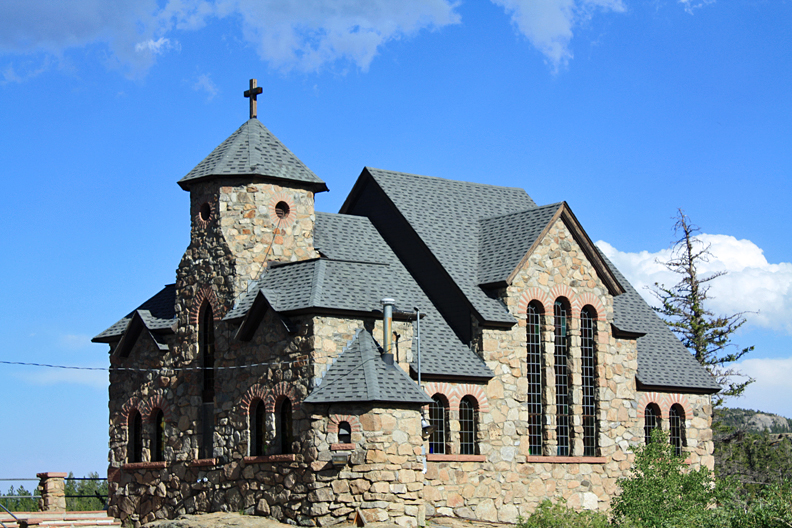 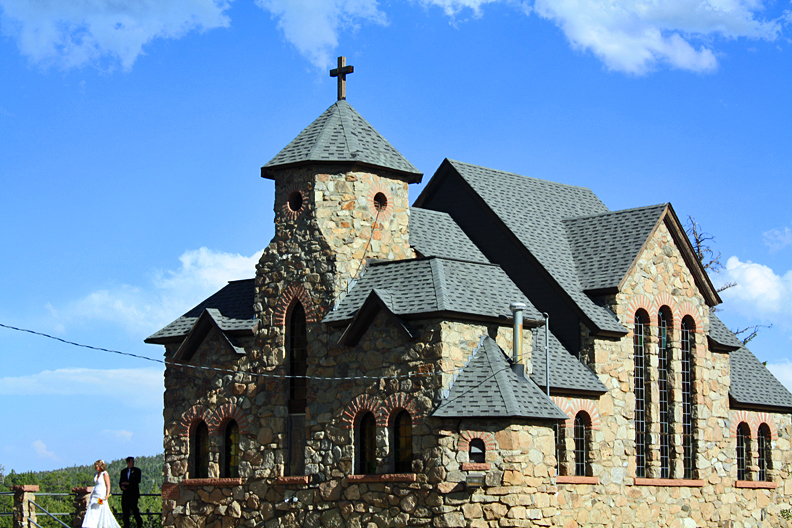 The bride and groom are coming out to greet us.  Wasn't that nice of them? 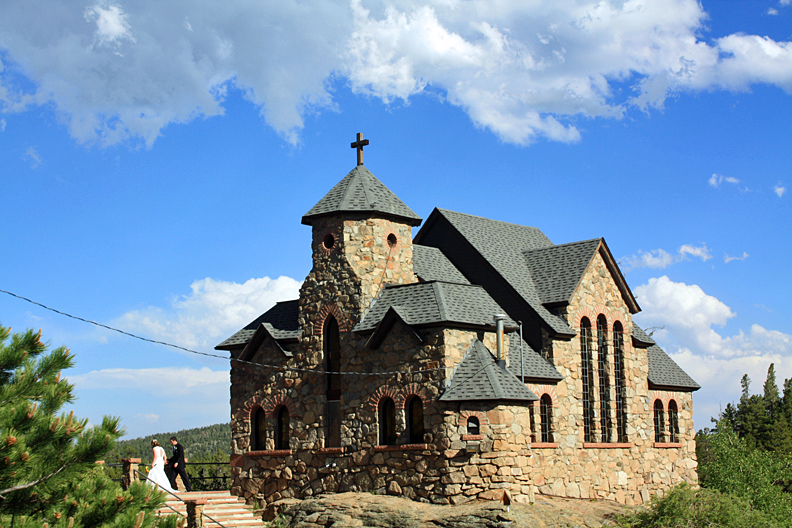 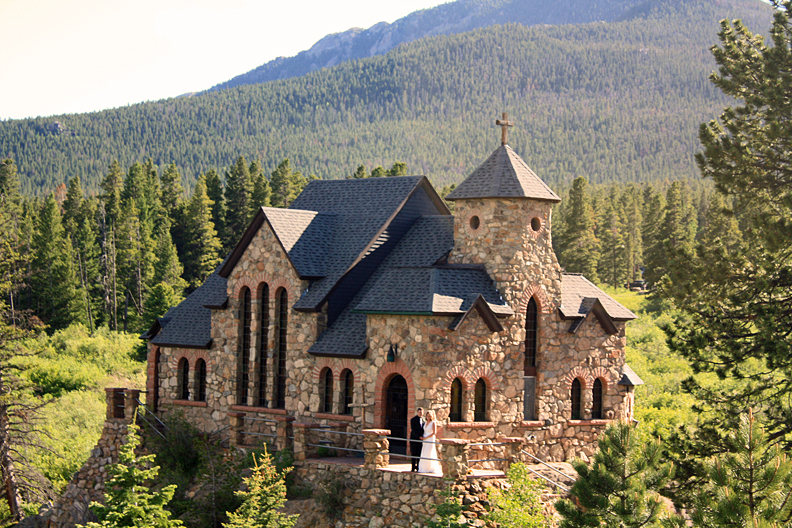 These last two are my favorite pictures because you can see Mt. Meeker in the background.  However,  the sun was RIGHT in my face ---so I managed to get some sun spots... Oh Well---I was just thrilled to see this church and note that the bride and groom were standing there JUST for us!!! 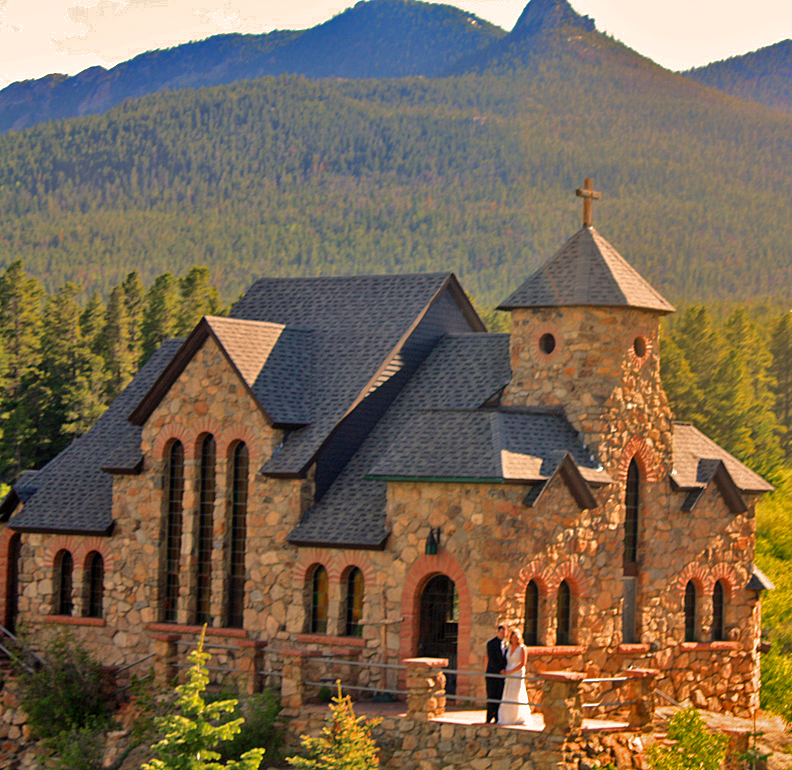 What a beauty!  I have one more picture (which of course was my favorite).  It showed the snow on the mountains to the right in this picture---BUT the sun glare on the picture really distorted it.  SO --hopefully,  you will enjoy all of these and just imagine the snow on the tops of the mountains.... Isn't that bride and groom standing there just awesome?  (I got lucky to get these!!!!)

Hope you took time to read about how this chapel got its name (even though I'm sure the post is 'wordy')... I just think it is SO interesting.  We certainly do find some NEAT places during our travels. As I've said many times,  get off of the interstates --and enjoy the 'real' world!!