Scenic Highway 12 in UTAH- Part I

As most of you know,  George and I prefer to drive on the 'back-roads' in this country when we can.  On our recent trip out west,  we did take the interstate much of the way---mainly because of time constraints...  BUT--we were able to get on some back-roads on occasion, especially in Utah.

Today,  I will share with you a teeny tiny part of Scenic Highway 12 (which runs between  Highway 89 near Panguitch and Torrey, Utah).  You can see the map above showing where we were.  I will feature Red Canyon and Bryce Canyon in other blogs --but will begin today's post a short distance beyond the entrance to Bryce Canyon at Water Canyon (near the Mossy Cave trail).

The date was June 22,  and we reluctantly were leaving the Kanab, Utah area --after four wonderful days, and heading toward Green River.  Our first stop that morning was,  what else,  to see a WATERFALL (actually TWO of them).  What a neat place and hike!!!!  We've never been close to a waterfall before with hoodoos around it!!!!  How special is that!   Here are some pictures from our 1st stop that morning. 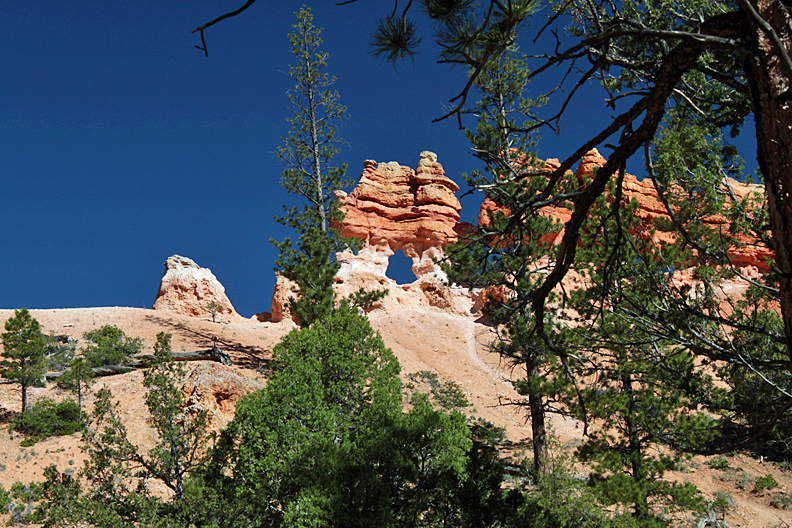 Water came through this area at one time when the pioneers in the 1800's dug an irrigation ditch to this area to provide water for the nearby communities. All of the water changed the geology of the canyon by washing away many of the hoodoos.  Note the ones left in the picture above.  The water formed an arch!! 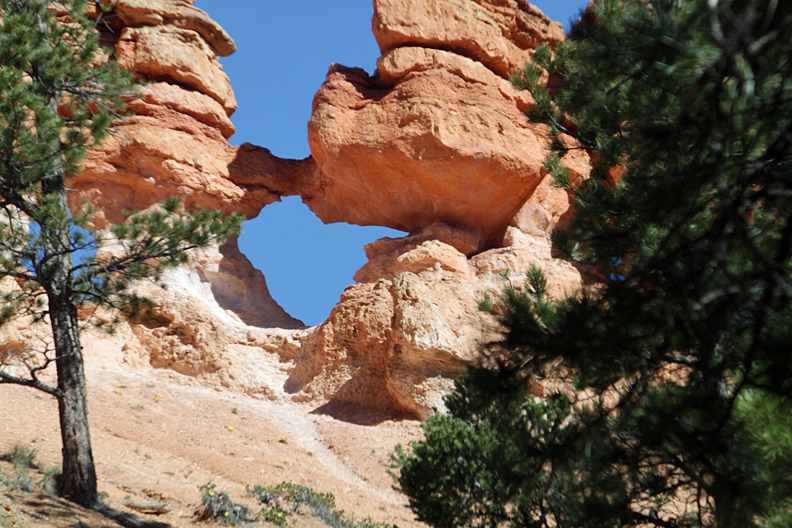 What an interesting trail.  There was an actual cave/grotto which is more like a shallow alcove filled with moss.  We were just amazed to be able to see some waterfalls in an area like this. 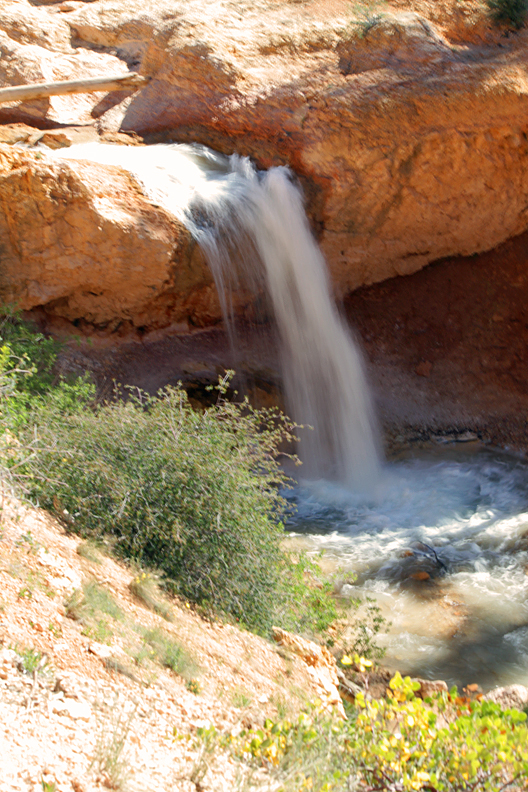 Here is one of the two waterfalls.   George took a great picture of it.  Its name is  TROPIC DITCH FALLS... There wasn't too much water and the waterfalls weren't too large---but you know us... We love waterfalls of all sizes!!!!! ha 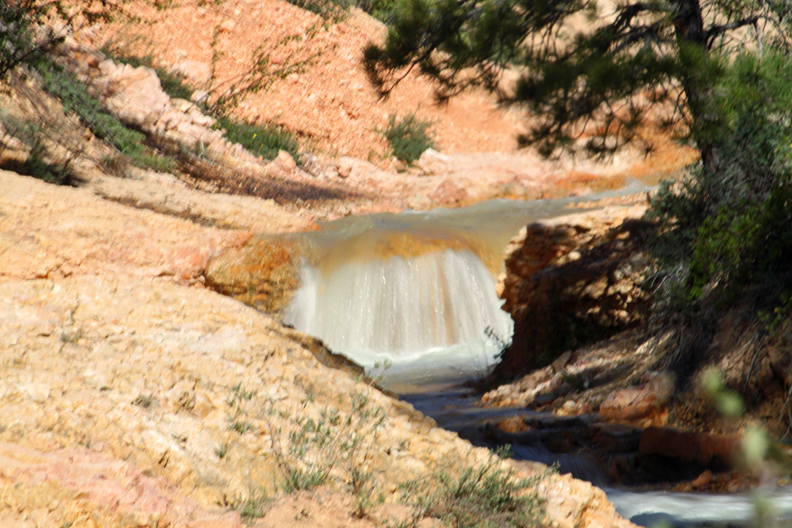 And here is the other waterfall,  named UPPER TROPIC DITCH FALLS.  Neat, huh? 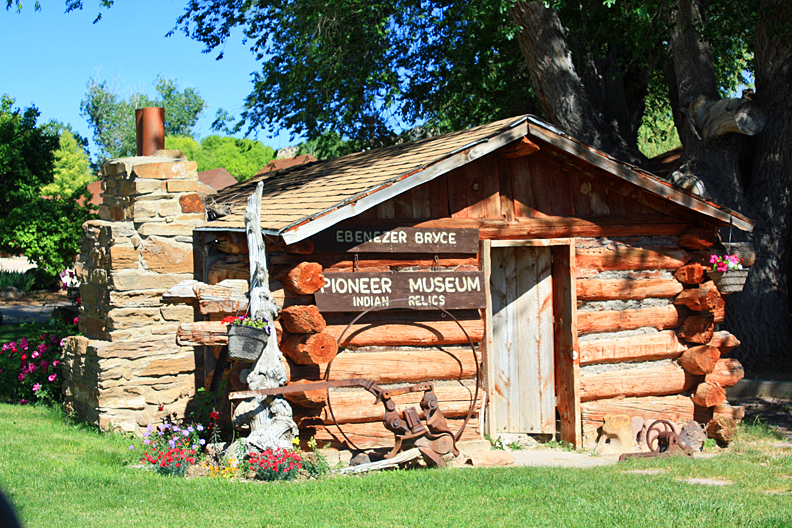 Our 2nd stop that morning was in the town of Tropic (on map above).  We visited the Ebenezer Bryce cabin (which is now a museum). Ebenezer Bryce (1830-1913) was a Mormon pioneer, best known as the person whom Bryce Canyon is named after.  He left Scotland for Utah at the age of 17.  They moved to southern Utah in 1862, and settled in Pine Valley in 1875.  It was there where he built the oldest Mormon Chapel still in use today.  Soon after, the family moved to the Paria Valley.  Bryce Canyon became a National Monument in 1923 and a National Park in 1928. Ebenezer Bryce eventually moved his large family to Arizona. As we left Tropic,  and headed through Cannonville and Henrieville---we saw some gorgeous scenery around us.   Isn't this an awesome picture????  Those rocks look like Indian teepees to me.... What say you? 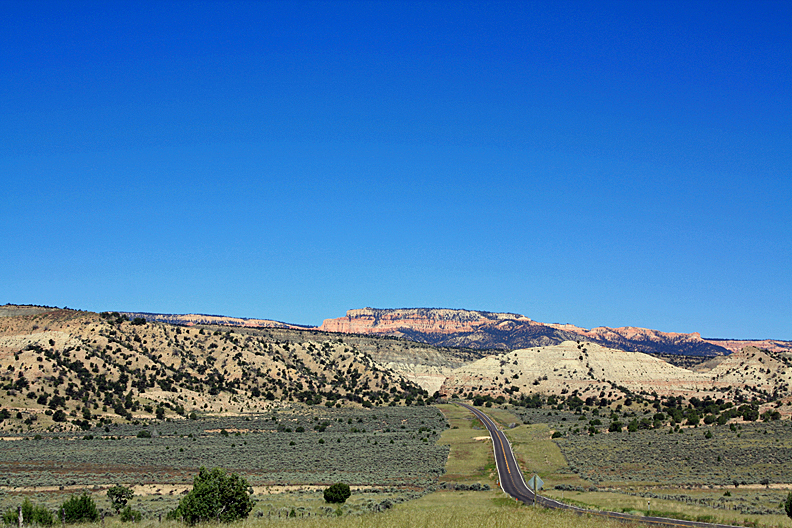 Finally,  here is one more picture of this gorgeous two-lane scenic highway we took... IF you ever get to spend some time in Utah--just take some drives along some of the back-roads.  You'll love 'em!!!!!

MUCH more to come from Scenic Highway 12 in the future!!!!!!   Hope you enjoyed the beginning of that drive with us.