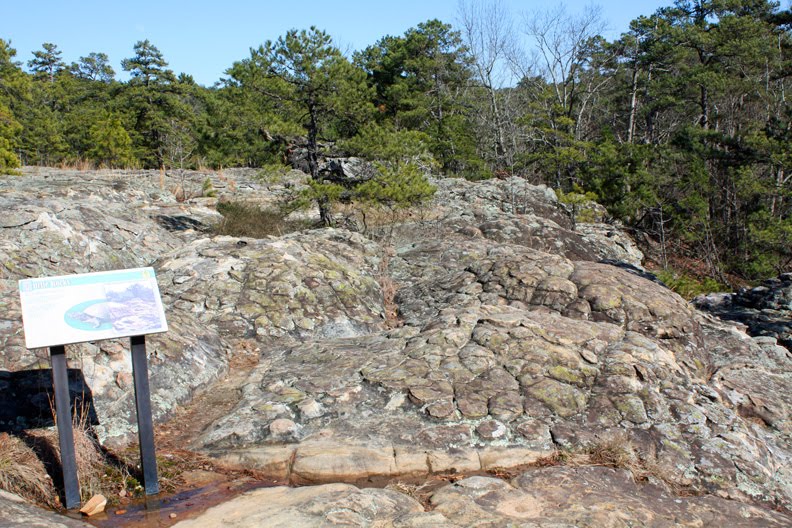 Recently I showed you Mushroom Rock in Alabama (click HERE) so I thought it appropriate now to feature the TURTLE ROCKS in Petit Jean State Park in Arkansas. There is some interesting information about Petit Jean Mountain found on the Arkansas Geology website--if you have time and interest to read more (click HERE for that info). Here is a little of what it says:
Some of the most unique features seen around Petit Jean State Park are those called "Turtle Rocks". Mounded polygonal structures resembling a turtle shell were carved in thick sandstones of the Hartshorne Sandstone. The exact processes that create 'turtle rocks' are poorly understood. One explanation involves spheroidal weathering. This process occurs when water percolating through cracks and between individual grains in the rock loosens and separates layers of the rock. The weather acts more rapidly on the corners and edges of the rock producing a rounded shape.
Another theory concerns the amount of calcite present in the matrix of the rock holding the grains together along with the size of the grains that allow for this type of weathering. Either way, the weathering of the rocks is strongly influenced by the polygonal joint pattern seen in all 'turtle rocks'. Here are some pictures that we took while in that area. 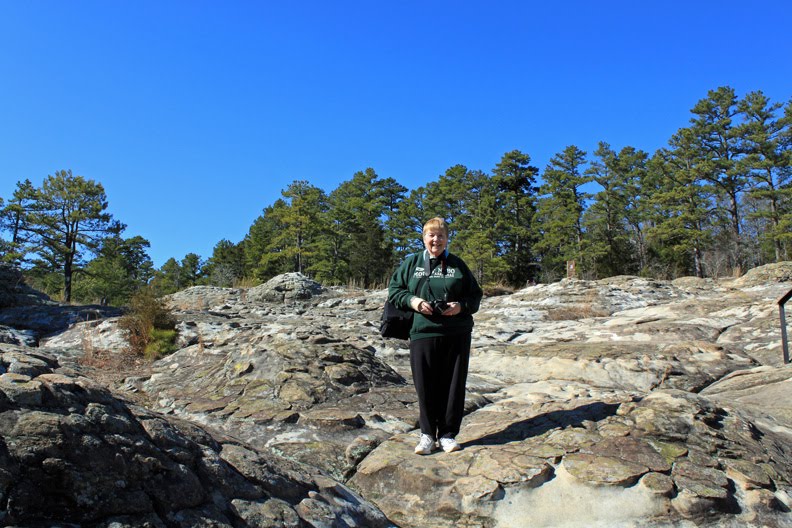 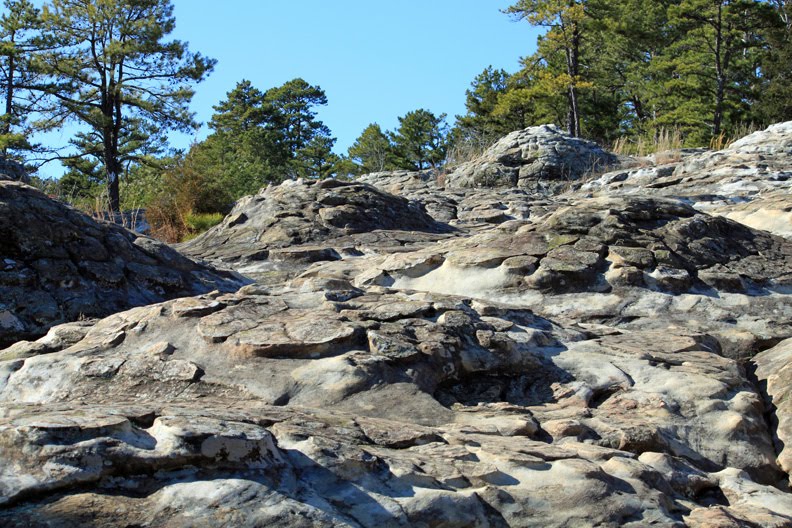 Here's another picture of all of the turtle shells... Interesting, aren't they?? 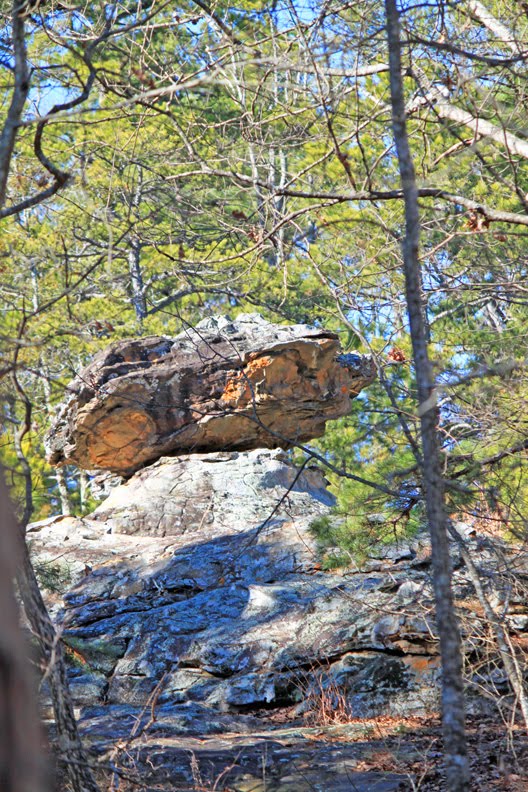 That is the KING of the Turtles--sitting up there on top of those rocks. Can you see that big turtle??????? WOW!!!! 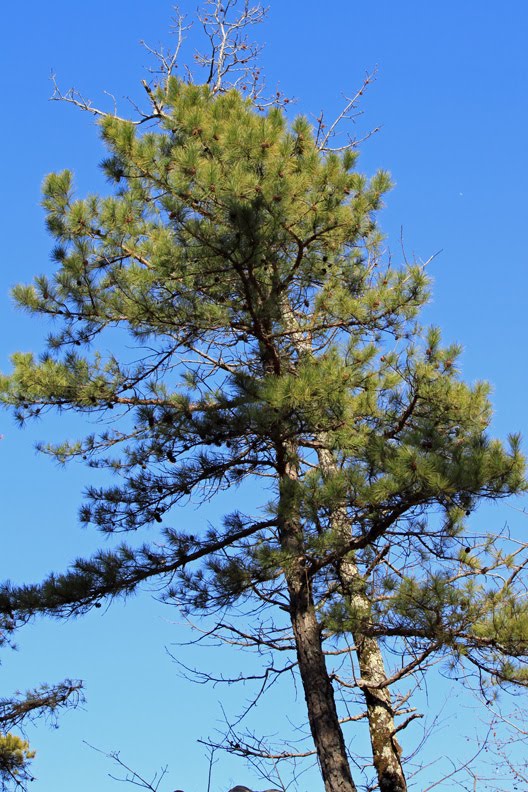 I was almost as interested in the gorgeous blue sky on this beautiful day in Arkansas (Feb. 24, 2010) as I was seeing Turtle Rocks. We had had so much dreary weather in TN before this trip---so seeing the blue skies made both George and me feel SO good. I also love the green pine tree next to that blue sky. 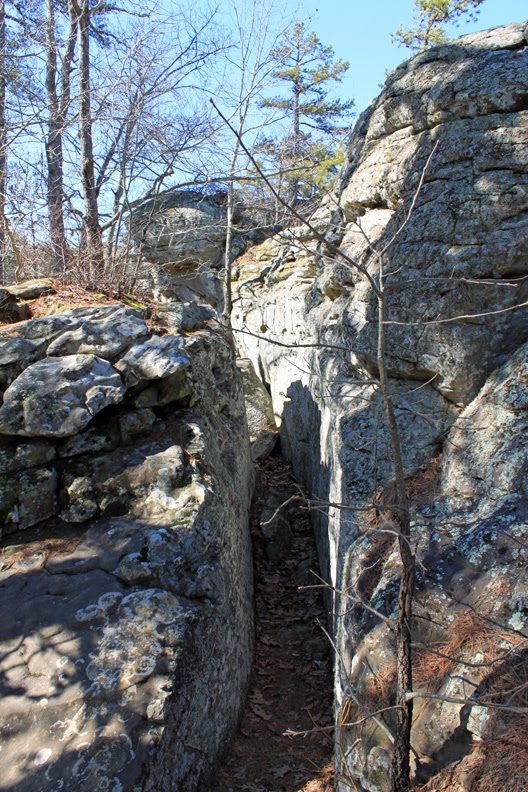 After climbing around on Turtle Rocks, we headed toward "Rock House Cave". That will be another blog post!!! There were so many interesting rock formations and narrow passageways along the path. Isn't this one interesting? 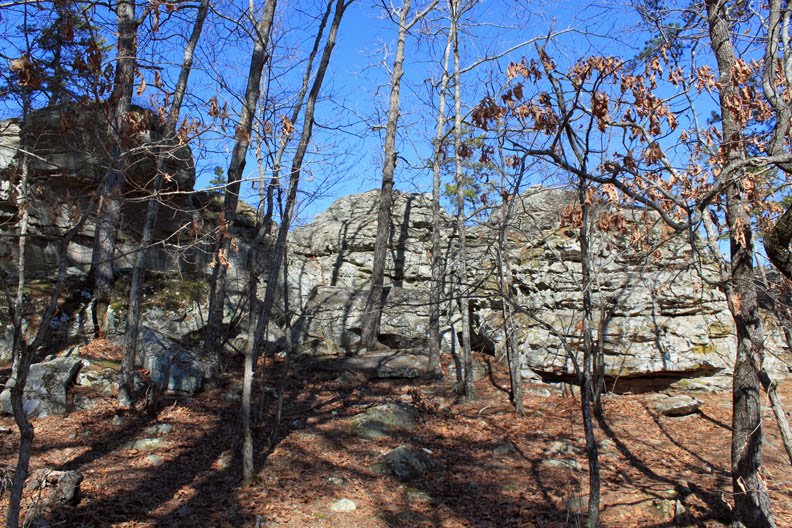 Here's another view of all of the huge rocks along our path to Rock House Cave. We are now below the Turtle Rocks, since we climbed down. Turtle Rocks actually are along the top of those big rocks you see in the picture. 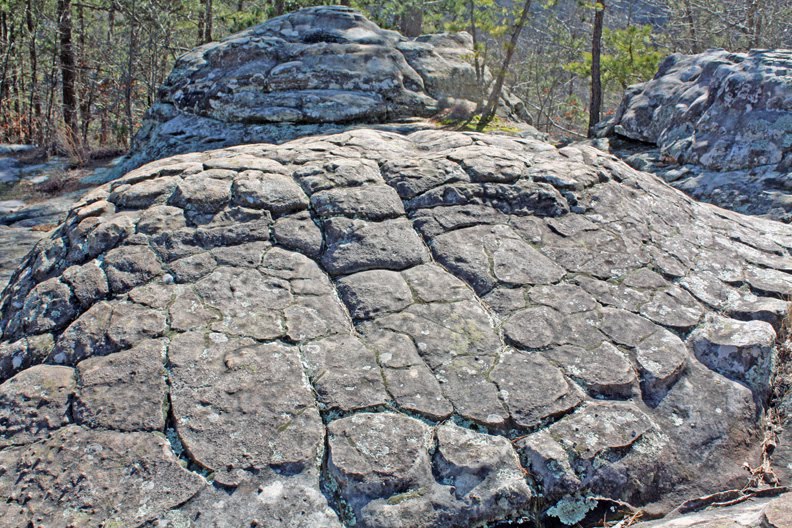 Besides the picture of the KING of the Turtles, this picture is also a fav... Isn't it totally awesome that these rocks really do look like huge turtle shells?????
Hope you enjoyed seeing both Mushroom Rock and Turtle Rocks... Being out in nature is just so awesome. All we have to do is to take time to get out and enjoy the beautiful world around us!!!!!
Speaking of our beautiful world, ours here in Tennessee is wet and cold today... We had RAIN yesterday ---and it has now turned cold and snowy. The Crocuses are FREEZING out there today!!! Where's Spring????????? Gosh-Darn!!!!!
Have a great Monday--wherever you are!!!!
Hugs,