When George and I were on our Virginia/Maryland/West Virginia trip in September,  we visited Harpers Ferry,  West Virginia on 9/26/13.   I had always heard of Harpers Ferry but didn't know much about it.  What I did find out was that there is MUCH HISTORY there.

The National Park Service identified SIX themes which run through the town's history: Industry, Natural Heritage,  Transportation,  John Brown, Civil War, and African American history.  I had heard about John Brown and the Civil War at Harpers Ferry--but didn't realize that it was the place where the first successful American Railroad arrived.  And I didn't know that it had one of the first integrated schools in the United States.

What I did know was the story about John Brown's attack on slavery,  and I knew that at Harpers Ferry,  there was the largest surrender of Federal troops during the Civil War.  If you want to read more about Harper's Ferry,  click HERE.

Today I'll share with you some of our photos from our visit to Harpers Ferry.  Be sure to click on the photos in order to see them larger. 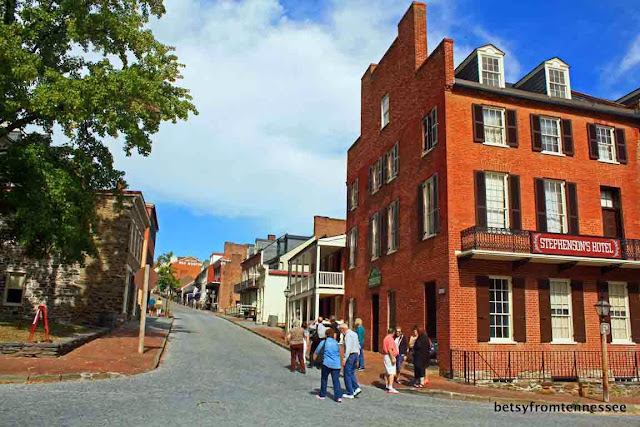 Here is a photo taken from the other end of the street --looking back down,  where we had just walked. 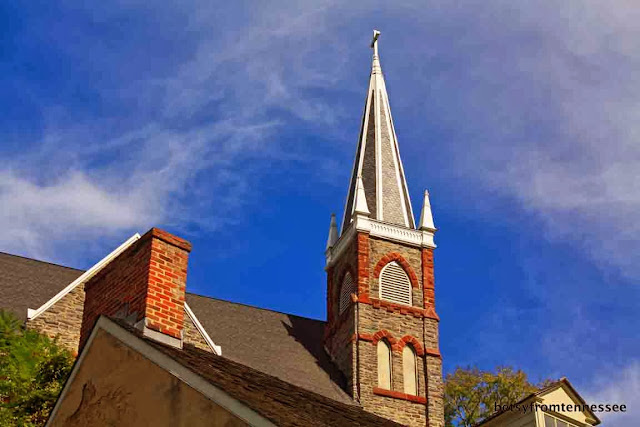 I was fascinated by this church sitting on top of a big hill---ABOVE town... I have 3 pictures of the church in today's post---from 3 different angles!  Here is the first photo--taken from Shenandoah Street,  looking up at the church and steeple.  Beautiful location UP there,  don't you think???? 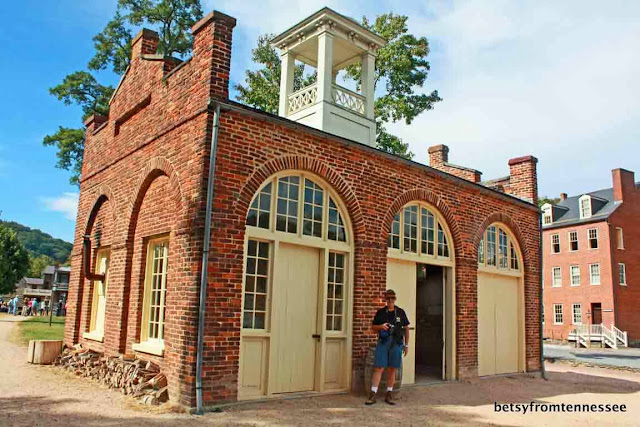 George is standing in front of the armory fire engine house (now known as John Brown's fort).  John Brown believed he could free the slaves and chose Harpers Ferry as his starting point.  He wanted to seize the 100,000 weapons at the arsenal,  so a group of men including 3 of his sons and 5 free African Americans tried to do so.  Thirty-six hours after the raid began,  most of Brown's men were killed and he was captured. He was found guilty of treason and hanged on Dec. 2, 1859.  BUT--John Brown certainly brought  attention to the country pertaining to the issues involving slavery.

What do you remember MOST about John Brown?????  I remember the old song which we sung (called John Brown's Body) to the tune of the Battle Hymn of the Republic... Remember that song???  You'll need to google it on You Tube to hear it. 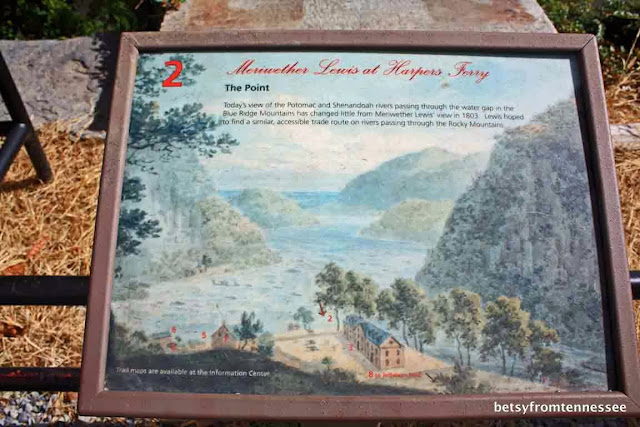 This is the "Point" where two famous rivers merged.   The Shenandoah River was on the right --and the Potomac River was on the left...  We paralleled the Shenandoah River while walking on Shenandoah Street. -- This street joined up with  Potomac Street (turning left)--which paralleled the Potomac River.   There's an interesting fact about Meriwether Lewis on the sign.  You can find more info about Meriwether Lewis by checking out the link I provided above. 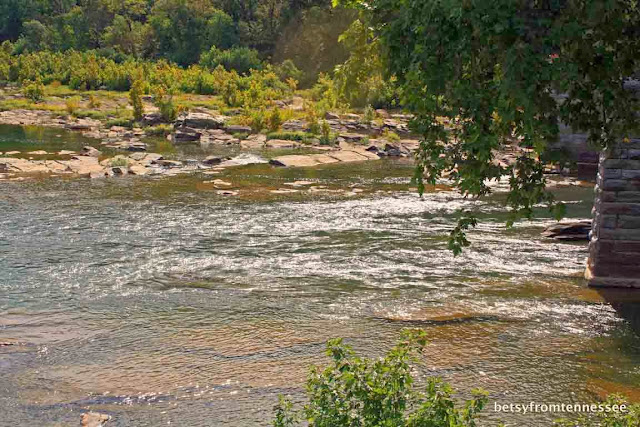 Here is my picture showing where the Shenandoah River comes in from the right and joins with the Potomac River on the left.. The river then gets very wide. 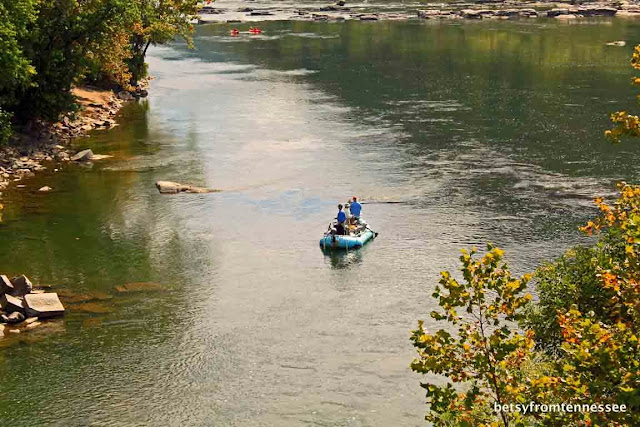 This photo show how wide the river becomes after the two rivers merge..  As you can tell,  fishermen are enjoying the morning...  Also,  there are some kayakers in the water.  See them????? 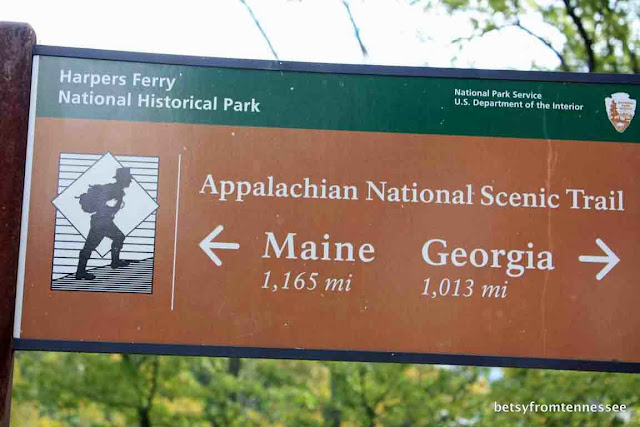 I was surprised to see that the Appalachian Trail goes through here....  Did you know that?  Want to walk to Maine ---or Georgia?????  (Think I'll pass on that offer!) 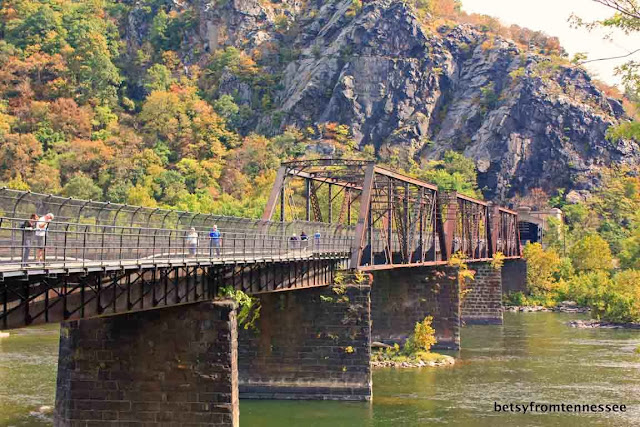 Here is the footbridge which we took across the Potomac River. 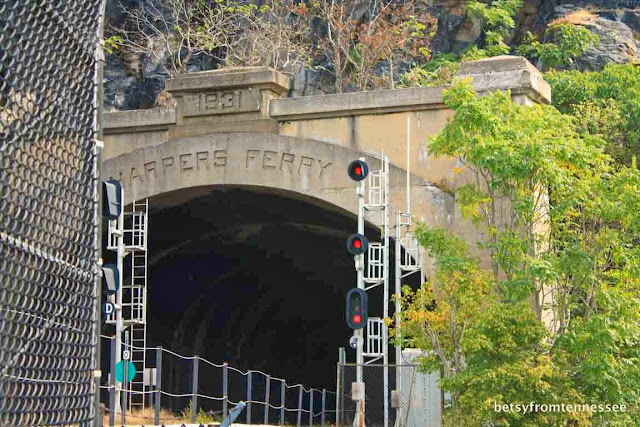 We took the footbridge to get to the other side --and to get an up close and personal look at the railroad tunnel (built in 1931). 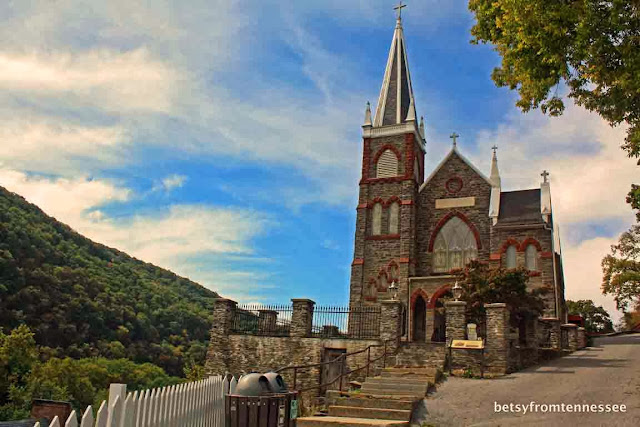 After seeing all of that,  we walked UP-UP-UP a series of steps and hills ---and came to the church,  St. Peter's Roman Catholic Church.   This is Photo Number TWO that I took of this church.  I was amazed especially after seeing the location of this gorgeous church. 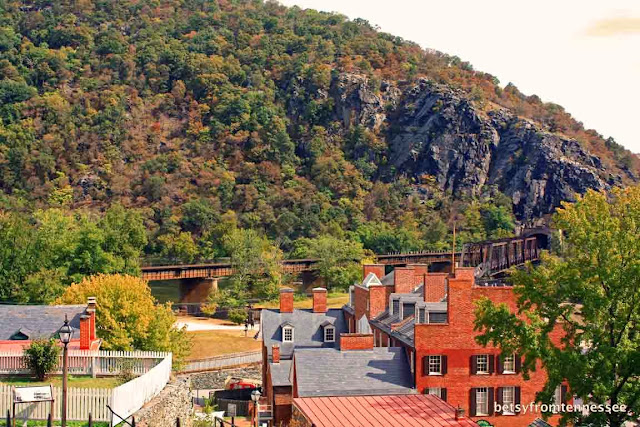 This is a good view from the church looking back toward the town.  You can see the footbridge and railroad tunnel from here.  Those are the Blue Ridge Mountains straight ahead. 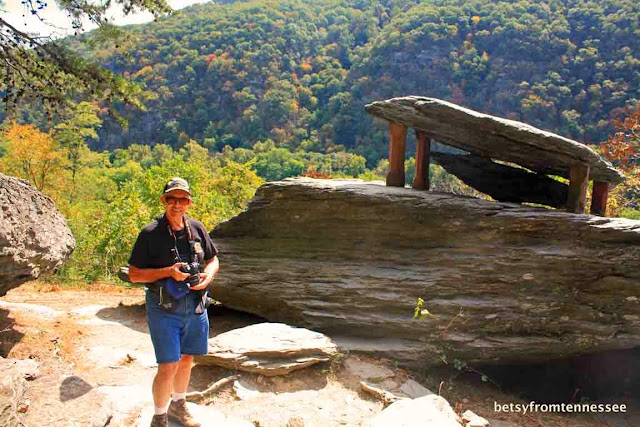 We continued walking UP UP UP---and came to Jefferson Rock.  This huge rock on the top of the hill over Harpers Ferry  is named after Thomas Jefferson.  Jefferson visited here on October 25, 1783 ---and found the view from here impressive.  He reported that the "scene is worth a voyage across the Atlantic".    We loved the view from here also. 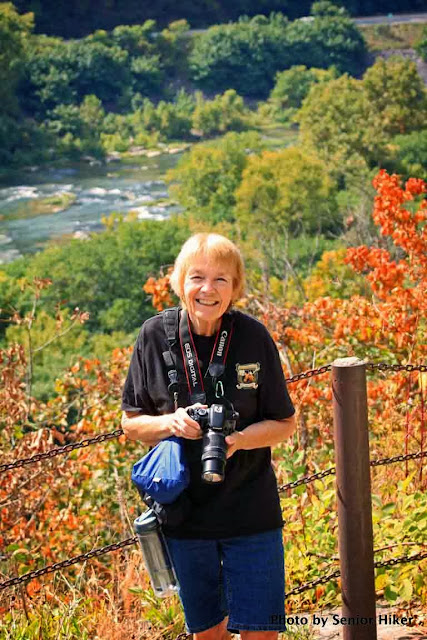 George took this photo of me near Jefferson Rock.  That is the Shenandoah River in the background. 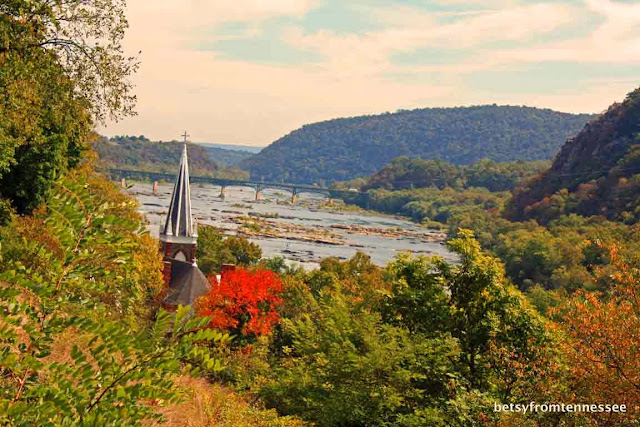 Finally,  here is my third photo showing the church steeple.   Now---we are at Jefferson Rock looking DOWN on the church.  You can also see the WIDE Potomac River in the distance.

Hope you enjoyed seeing my photos from Harpers Ferry.  There's alot more history here including some happenings during the Civil War---and MORE.    If you haven't made a trip there,  add this place to your list of places to visit!!!!  You will enjoy it!

Have a great day.  Be sure to check out my Photo Blog today.  Click HERE.