In order to see any or all of these 16 posts so far,  you can click HERE.   The posts will come up with the last one I posted in April coming up first.   It was a fantastic trip --and Yellowstone is one of our favorite places that we have EVER visited.  AND--this part of Yellowstone---the Canyon area, is a favorite!!!

Going back to September 20, 2012 (which was when all of these photos were taken),  we first visited the NORTH RIM (Lookout Point,  Red Rock Point,  Grand View and Inspiration Point).   I have already blogged about all of these...

SO--after some lunch that day,  we headed to the SOUTH RIM in order to see Upper Falls,  Crystal Falls,  to hike down Uncle Tom's Trail to get a close-up view of Lower Falls,  and then to Artist Point.   Today's post will be about that visit to the South Rim.

The photo above is of Upper Falls --which can be seen from the South Rim.  Be sure to click on the photos for enlargements. 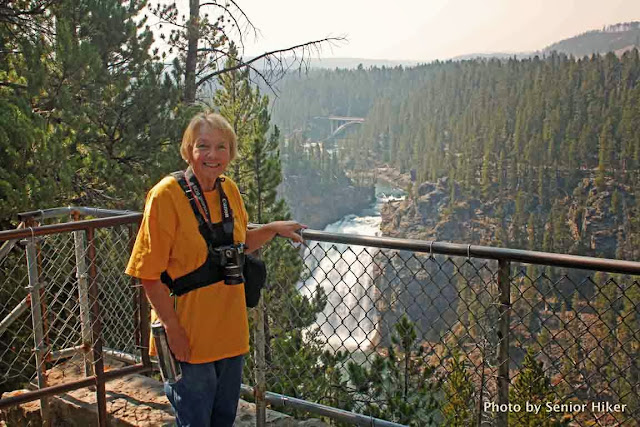 George took this photo of me standing at  the Upper Falls overlook.


After seeing Upper Falls,  we hiked along the South Rim Trail --so that we could see another waterfall which many people don't even know is there.   This waterfall is not nearly as large as both Upper Falls and Lower Falls,  but it is pretty.   Your eyes aren't playing tricks on you... The waterfall is blurry since my camera focused on the beautiful greenery.  But--I still like the photo. 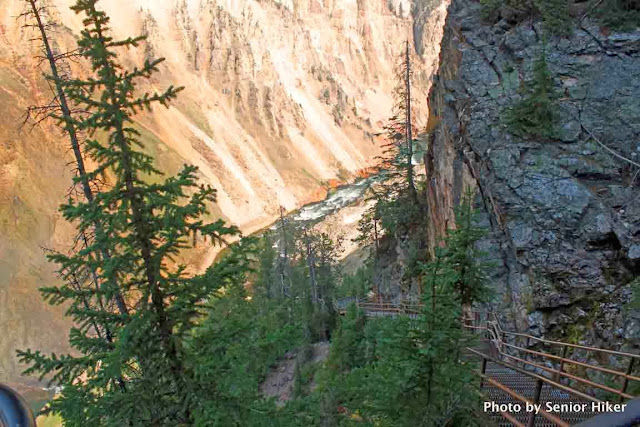 You can tell how steep it was going down into that canyon.  See the Yellowstone River at the bottom??????


We MADE it ---and seeing this gorgeous waterfall from here made that hike worthwhile....  (Wait a minute:  We haven't gone back up yet!!!!!! ha)

They say that between 5000 and 60,000 gallons of water rush over Lower Falls every SECOND, depending upon whether it is the dry or wet season.....  Wooooooo!!!! 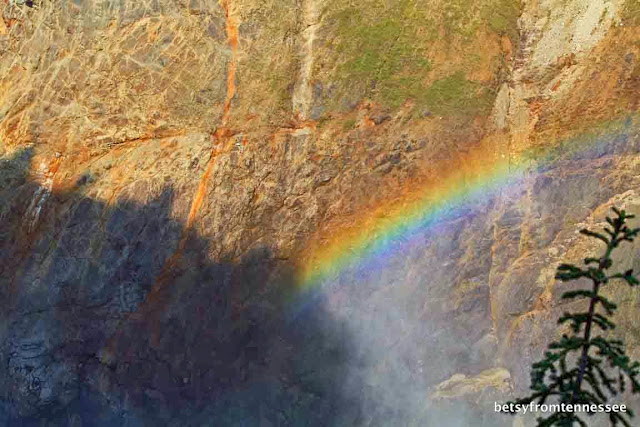 While looking at Lower Falls,  we saw a RAINBOW ---where the sun was still shining on the mist... Neat,  isn't it?


A nice man took our photo together while we were down there at the overlook.  Of course,  we reciprocated and took their picture also. 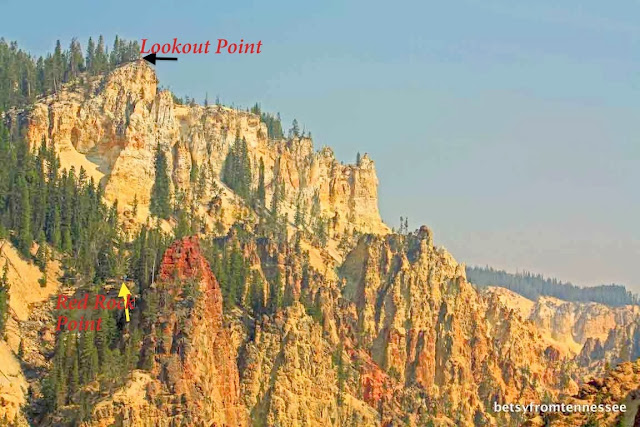 This was taken from Uncle Tom's Trail (South Rim) at Lower Falls --looking across the canyon to two places where we had been that morning on the North Rim (Lookout Point and Red Rock Point).    I knew that our hike down the mountain from Lookout to Red Rock Point  was a hard hike---but when I saw it from this angle,  I realized what a steep hike we had taken.  It wasn't quite as long and hard as Uncle Tom's Trail --but it was steep.  (If you look carefully, you can see people standing at both overlooks.) Sorry about the HAZY photo.... It was getting late in the afternoon.


I just have to include these next two photos --which will give you an idea of what Lower Falls looked like from those two lookout points on the North Rim. (Note photo above.) Both of these photos were in previous posts when I was talking about these areas on the North Rim.

We were WAY up there at Lookout Point ---and couldn't believe the difference  while seeing a waterfall from 3 different locations.


This photo was taken at Red Rock Point ----which was our favorite view of the Lower Falls of the Yellowstone.   Amazing how different things look from different areas!!!!   The Lower Falls look quite different from these two overlooks than it did when we were down there next to the falls..

If you want to see our other photos from Lookout and Red Rock Point,  click HERE. 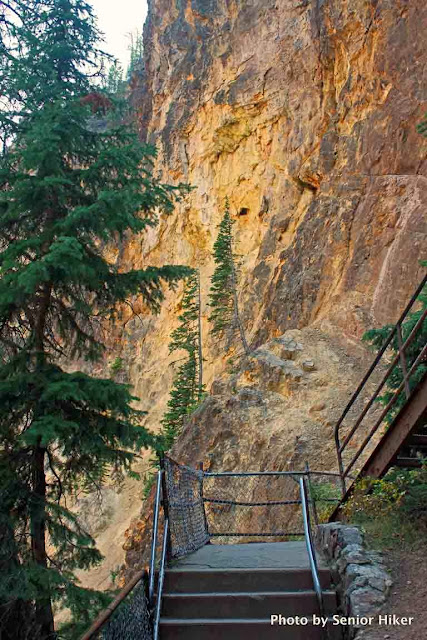 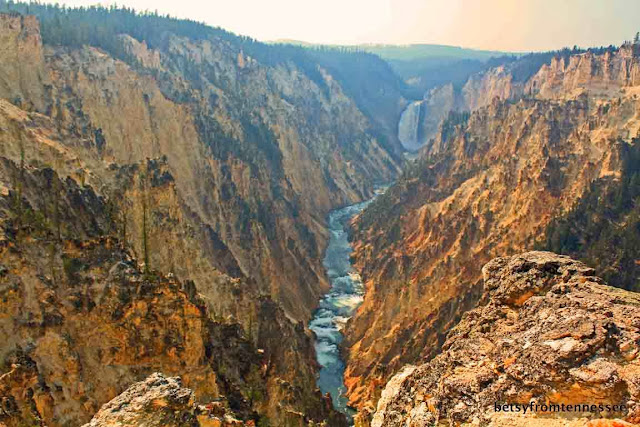 After getting back to the top,  we headed to Artist Point (also on the South Rim).  Again,  I apologize for the hazy photos.  Late afternoon is not the best time to visit Artist Point.  BUT---you can see Yellowstone River as it POURS down the canyon.   AND--you can see Lower Falls in the distance (which is about a mile away).   Upper Falls is beyond Lower Falls --out of sight. 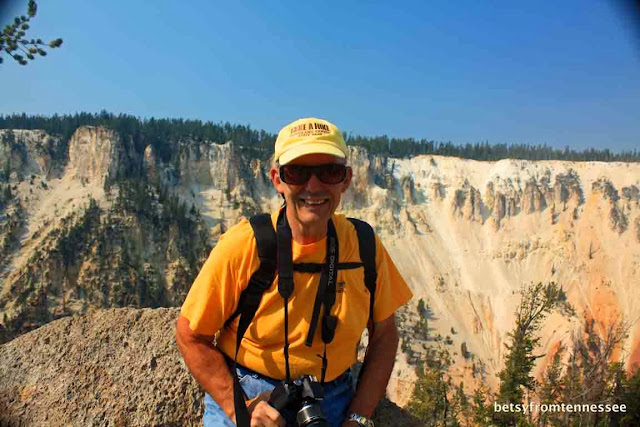 Here is a photo of George at the overlook at Artist Point. 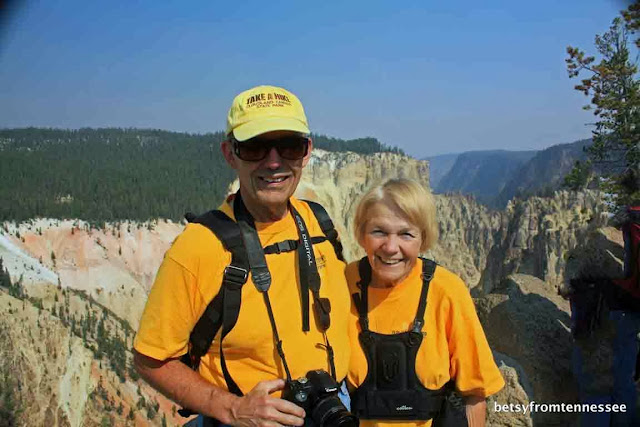 Another nice person took our photo together at Artist Point..  This overlook is one of the most popular in the park --so we would  love to go back at another time of day,  maybe the morning... The sun was WICKED --as you can tell by my squinting! ha 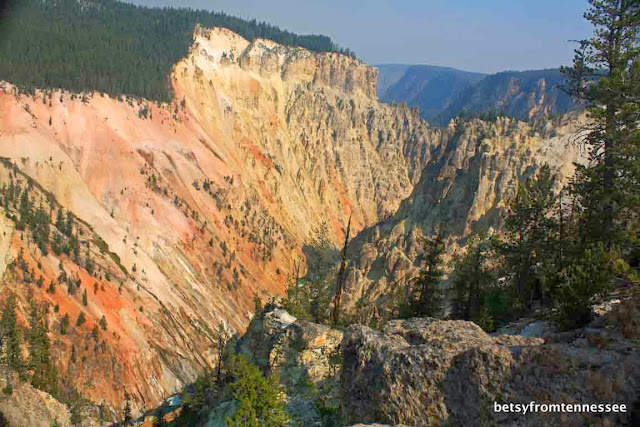 I'll close with a beautiful view of the canyon --taken from Artist Point.  You can see a tiny bit of the river in a few spots.  BUT--I wanted you to see the colors all around us.  What a marvelous place!!!!!

As you can see,  we took in everything we could on both the North Rim and the South Rim of the Canyon at Yellowstone.   If you ever go to Yellowstone and can hike,  we recommend Uncle Tom's Trail and also the Red Rock Point Trail... IF you cannot do much hiking,  we recommend  Lookout Point (Parking is nearby),  Inspiration Point,  and Artist Point... There are great views of the canyon from all of those areas.

Well--that completes my 3 posts from the Canyon area.  BUT--there's still alot more of Yellowstone to see... I'll try to continue sharing our wonderful trip in September of 2012 with you during the next several months (YEARS)... ha

Hope you have a fabulous weekend.