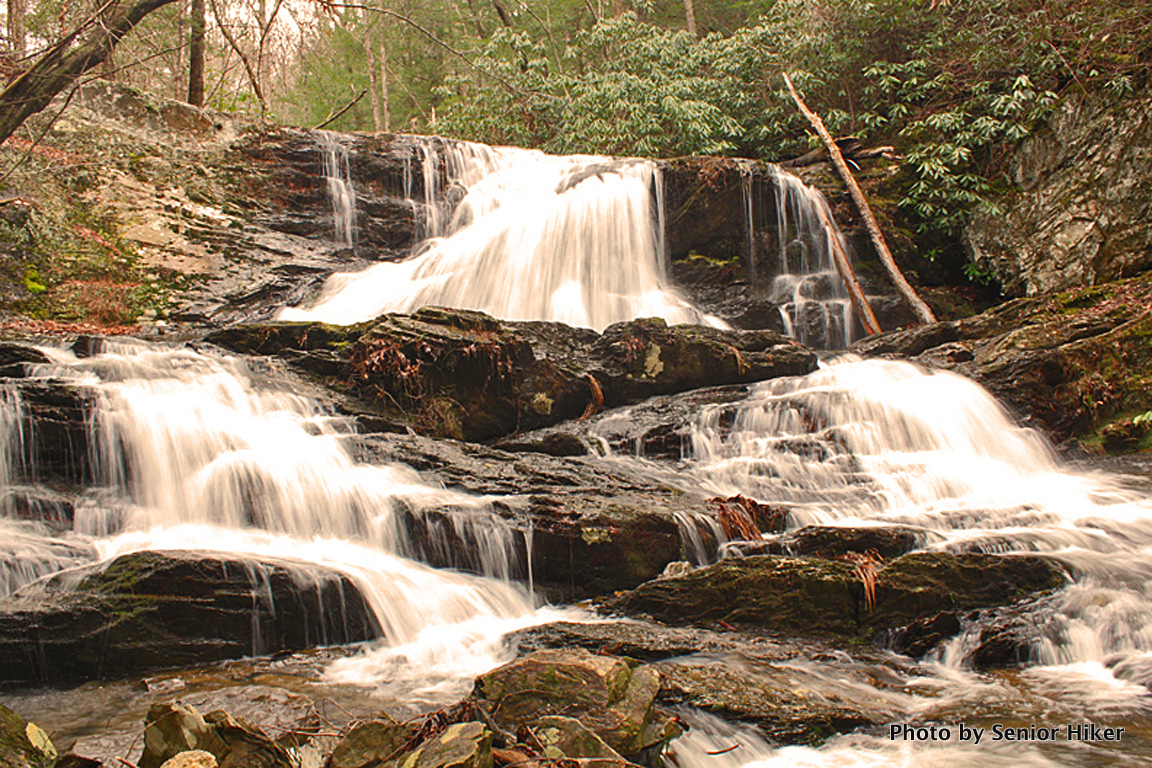 Each year in late December and early January,   I take time to go through all of my blog posts of that year ---picking out some favorite moments/photos... For the next several Fridays,  I will post some of my "Best of..."  pictures/moments.


Today I'll share some of our 2011 Waterfall pictures and experiences with you...  We love waterfalls---whether they are little ones or HUGE ones... We have seen at least 500 different waterfalls since 2001...    Above is one found up a dirt road in the mountains of North Georgia..  Its name is  JIGGERS CREEK FALLS and we loved this waterfall and its mountainous setting.  The picture was taken on 3/8/11.  Be sure and enlarge the photos for larger pictures. 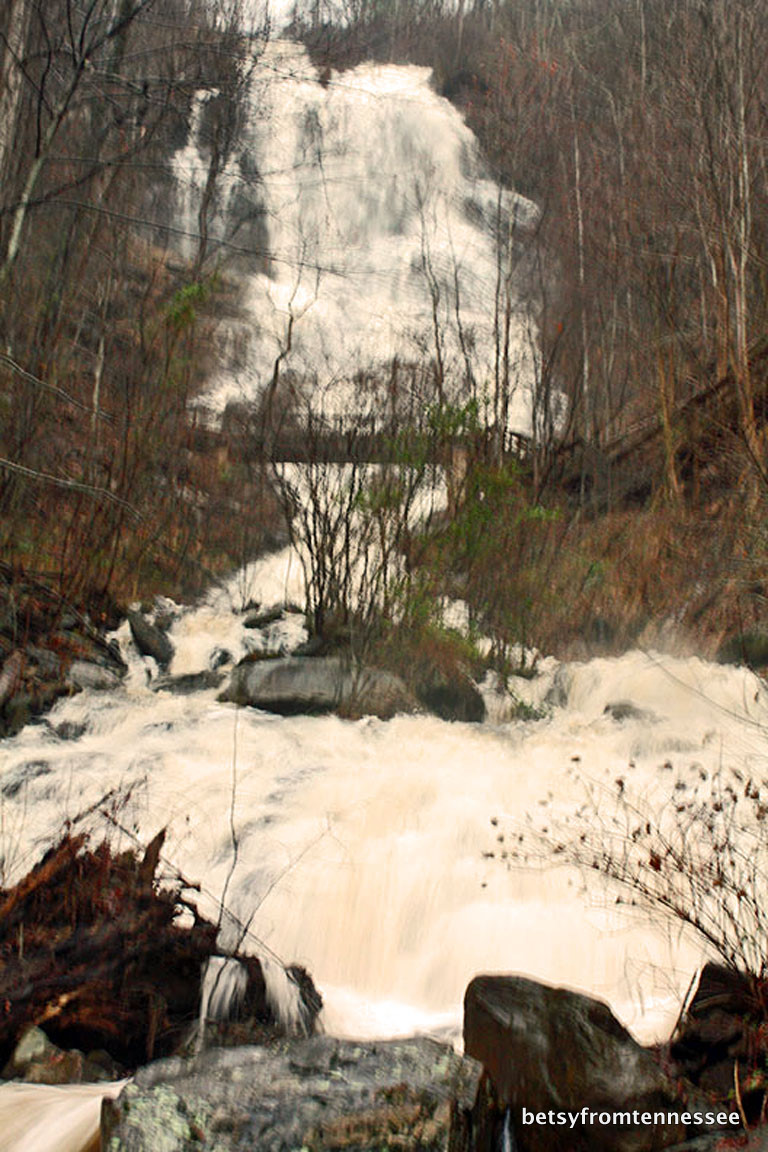 We visited Amicalola Falls State Park in Dawsonville, Georgia to celebrate George's birthday.  Many of you will remember me talking about that experience... It rained 'cats and dogs' ---but we still got out and enjoyed seeing the HUGE waterfalls in the area.   AMICALOLA FALLS is a large waterfall (729 feet) on any given day---but when we saw it  (pictured above),  there was so much water coming off of that waterfall that it was hard trying to get a really good picture... We were the only ones there that morning (who else is crazy enough to get out and walk in the rain??????ha)---so we felt as if that enormous waterfall was there just for US...  I was standing on the first bridge across the waterfall --and George hiked up to the 2nd bridge above...  This picture was taken on George's birthday,  3/9/11. 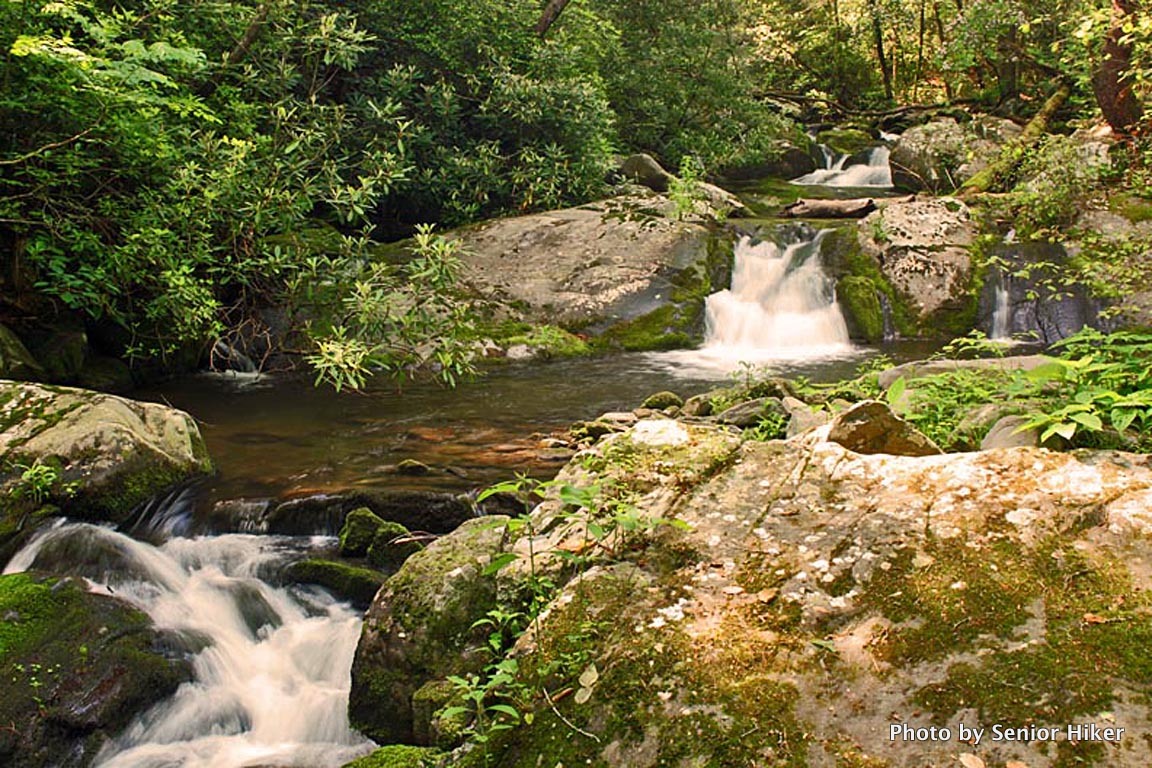 On May 23rd,   we drove to the Smokies and went through Cades Cove in order to drive on the Parson's Branch Road--way back in the mountains.   We had never been there before --but other than the road being in bad shape that day,  we loved driving that dirt road back into the Smokies.  We saw several little cascades and waterfalls that day ---and the one pictured above is one of our favorites,  called TRIPLE FALLS on Parson's Branch.  Quite different from Amicalola Falls,  isn't it????? ha 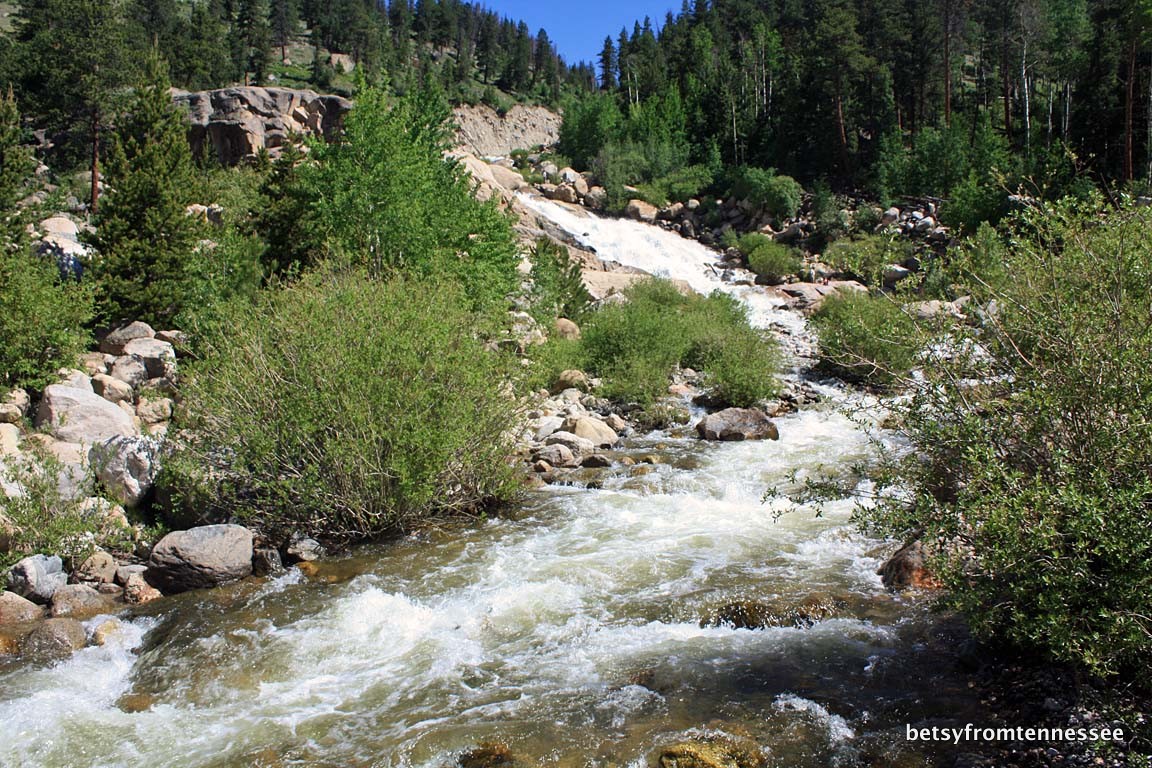 We didn't see many waterfalls on our trip out west in June ---but when we got to the Rocky Mountain National Park in Colorado on our way home,  we found several!!!!!  The one above is named HORSESHOE FALLS and is not far from the north entrance (near Estes Park).  We also got a picture of this waterfall from up on the mountain --while looking back.  If you missed that picture,  click HERE.  The picture above was taken on 6/25/11. 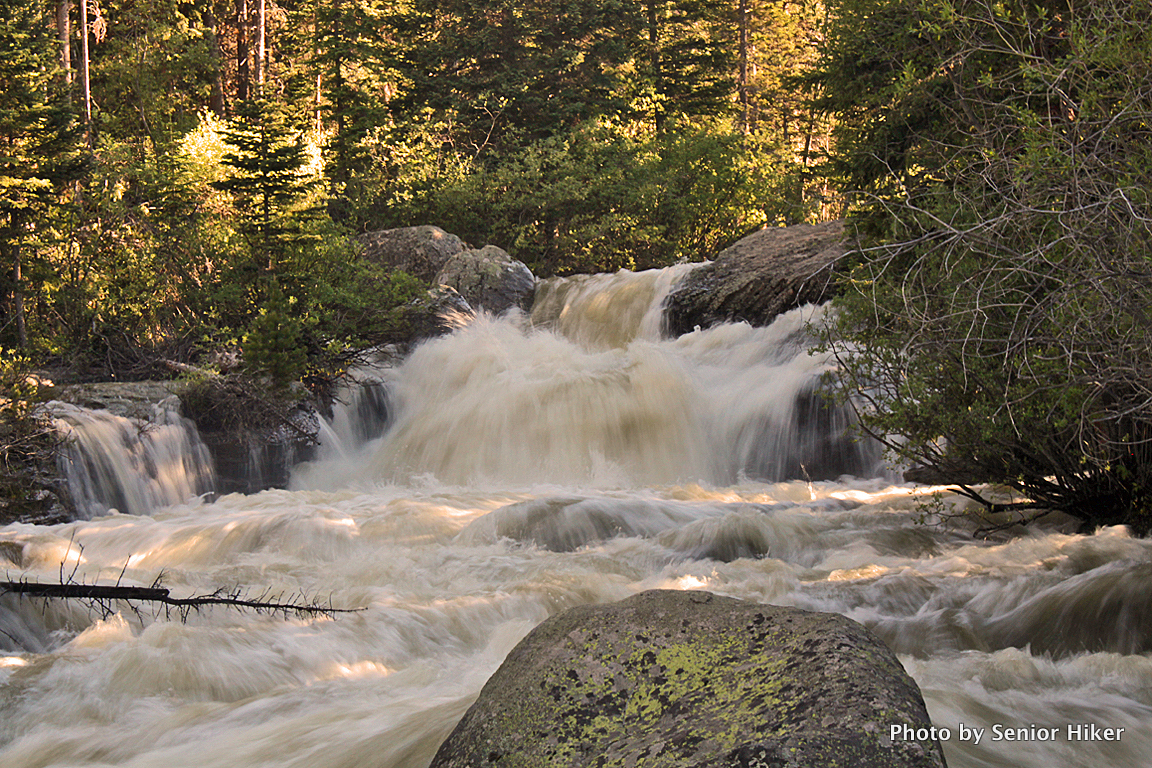 We went on a hike in the Wild Basin area of the Rocky Mountain National Park searching for  a waterfall... It was a  gorgeous hike ---and we were not disappointed when we found COPELAND FALLS...  Actually there were 2 waterfalls that we saw in that area,  but this is the upper one.  Isn't it gorgeous?  This picture was taken on 6/25/11. 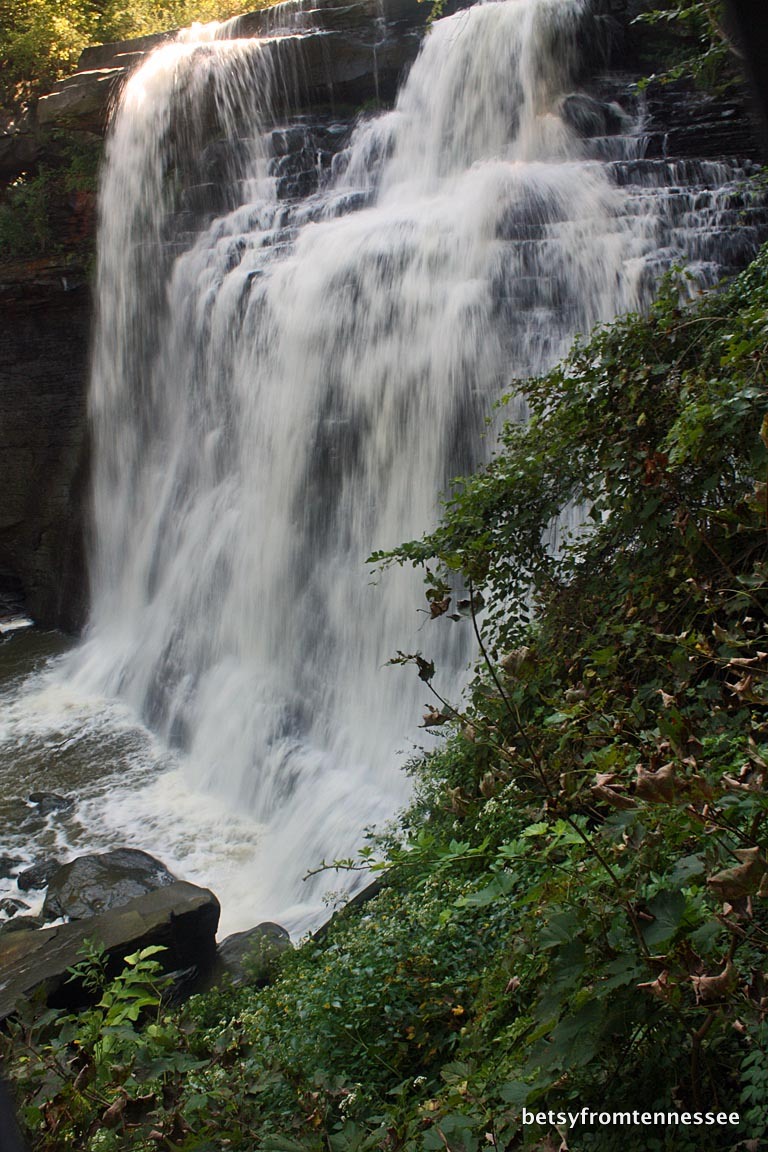 On September 12, 2011,   we visited the Cuyahoga National Park in Ohio (south of Cleveland) to see BRANDYWINE FALLS.  We were so impressed with this area and waterfall.  Visit it sometime if you get a chance. 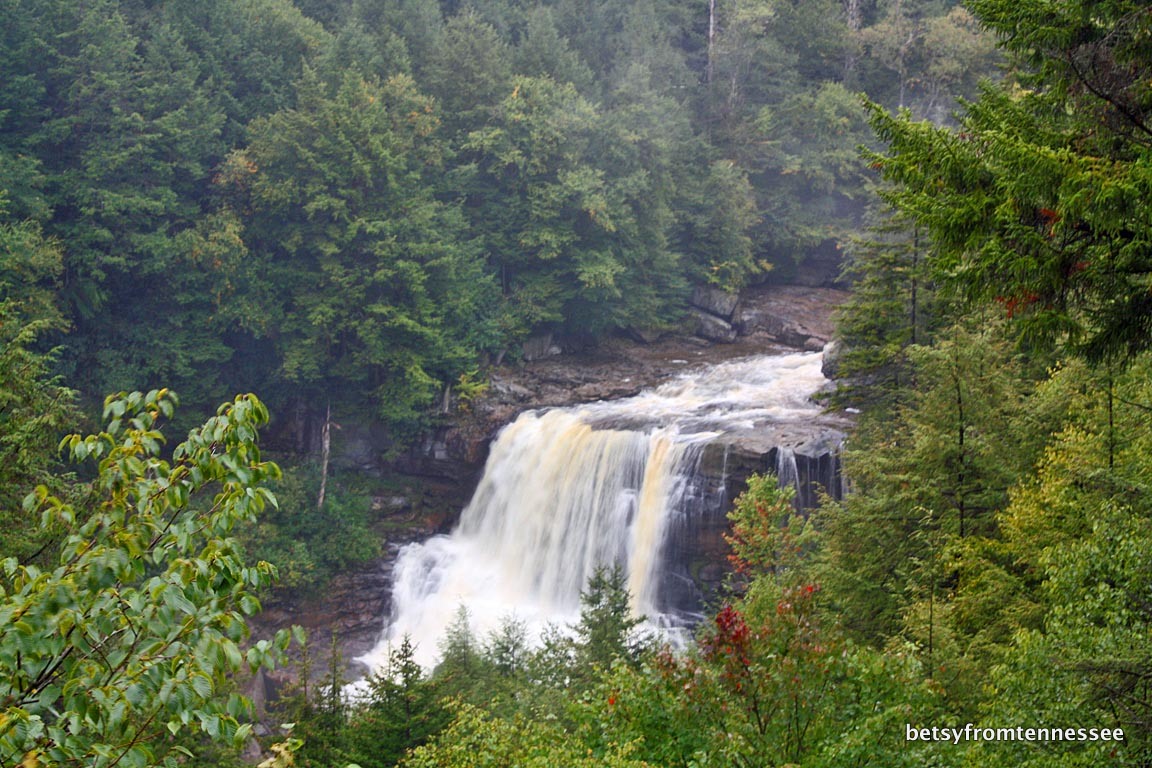 And finally  (and it is always hard to choose only 7 as our favorites of 2011) --here is another great waterfall,  BLACKWATER FALLS,  which is in the Potomac Highlands area near Davis, West Virginia.  As is usual for us,  it had rained and was raining when we were there---which meant more water coming over the waterfalls.   What a great place...  We were there on 9/15/11.   We loved this area so much and didn't have time to see it all.. SO---we hope to go back there in March of 2012.  I chose this picture from a distance so that you could see more of the area around the falls.

Have a wonderful weekend and I'll see you on Monday.
Hugs,
Betsy
Posted by Betsy Banks Adams at 4:00 AM 63 comments: