A Waterfall Birthday for Sure!!!

How does this sound for a great Birthday Trip:  3 full days of hiking and finding waterfalls (we found at least 25 --plus many more cascades and unnamed ones);  a great birthday dinner in the Blackwater Falls Lodge Restaurant;  AND  red velvet cake?????

That is what happened on my sweetheart's 70th birthday!!!!!   George wanted to prove to himself and others that he is really 30 (instead of 70) ----SO he managed a couple of steep bushwhacking hikes straight down (and back up) a mountain just to get some fabulous waterfall photos...  I think he really is 30..... ha

We truly had a great trip --other than that fact that we cut it one day short and drove home on Saturday rather than Sunday.  The reason for this:  The Birthday Boy got sick.  Actually both of us started with sore throats even before we went on this trip --but George's developed into some kind of an old cold or sinus infection.  He was pretty miserable on Saturday --but feels much better today... Guess we are both too old for two trips in a row.  Next year,  we'll plan a little better!!!!

If you have kept up with us on Facebook,  we posted some pictures there...  BUT--I'm sure we both will be talking about this trip (AND the Arkansas trip  AND the North Georgia mountain trip) for many, many blogs to come!!!!  Today I will share with you eight pictures.. The first four were some of the highlights of the week.  The last four are of the Birthday Boy.

Above  was a picture of us taken on March 7th at a waterfall named CATHEDRAL FALLS.   We had visited this waterfall last Fall when we were in West VA --but there was NO water coming over the falls.  This time,  as you can see,  there was plenty of water!!!  Cathedral Falls is located not far from Gauley Bridge, West VA.  Be sure to click on all of the pictures to make them larger.


Besides Blackwater Falls,  this set (of 3 falls) is my favorite in West Virginia.  These are called the Falls of Hills Creek.  They are located near the Highland Scenic Byway and the Cranberry Wilderness Area,  in the Monongahela National Forest,  not far from Marlinton, West VA (off of Highway 219).   The elevation here is about 3500 feet --and we saw some snow while here on that day (Thurs., March 8).   But it was a beautiful day --and a great hike.


The Highland Scenic Byway is usually closed during the winter due to snow.  BUT---this year,  like so many other places,  there has been very little snow at all.  We did see some around,  but not much. SO---we were able to drive on the byway and take lots and lots of pictures...  We were here on March 8.   The elevation ranges from 3500 to 4500 feet... This scenic area reminded me of the Blue Ridge Parkway.   Don't you just love those West VA mountains?


March 9th is George's birthday.  We stayed at the Blackwater Falls State Park lodge and visited about 12 different waterfalls in and around the Blackwater area on the 9th...  We were lucky with the weather all week ---BUT on this day,  someone opened up the freezer door and sent us some very very very cold weather.  Even though the sun was shining brightly,  the wind would just cut you in half.  The temperature that day was about 35 degrees --but the wind chill made it feel more like 25.... Brrrrrrrrrrrrrr......

The picture of us above was taken at Blackwater Falls on George's birthday.  Since they had the boardwalk and stairs gated in winter,  no one could get close enough to the falls.  SO---we had to take our pictures at the top.  You can see a tiny bit of Blackwater Falls in the picture.  (We did get some good pictures of the falls from the overlook across the gorge.) 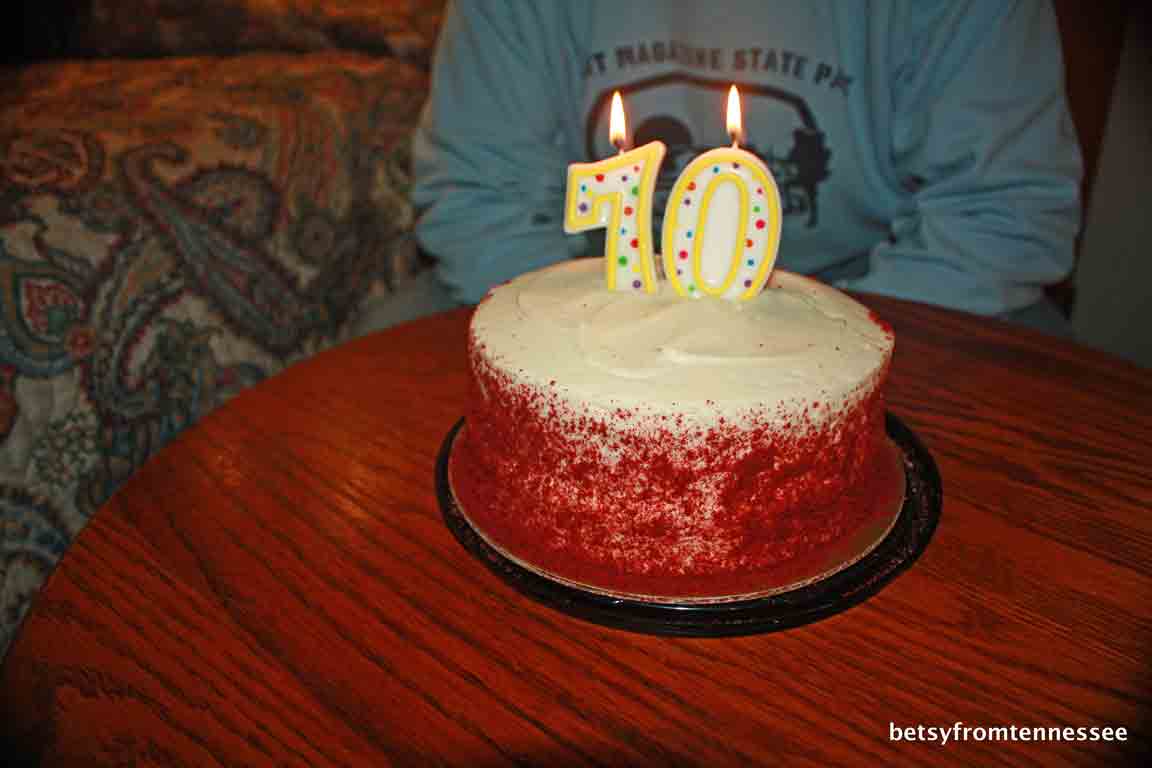 Here is a picture of the little Red Velvet Cake I 'made' (straight from Walmart) for George....  (It was good though!!) 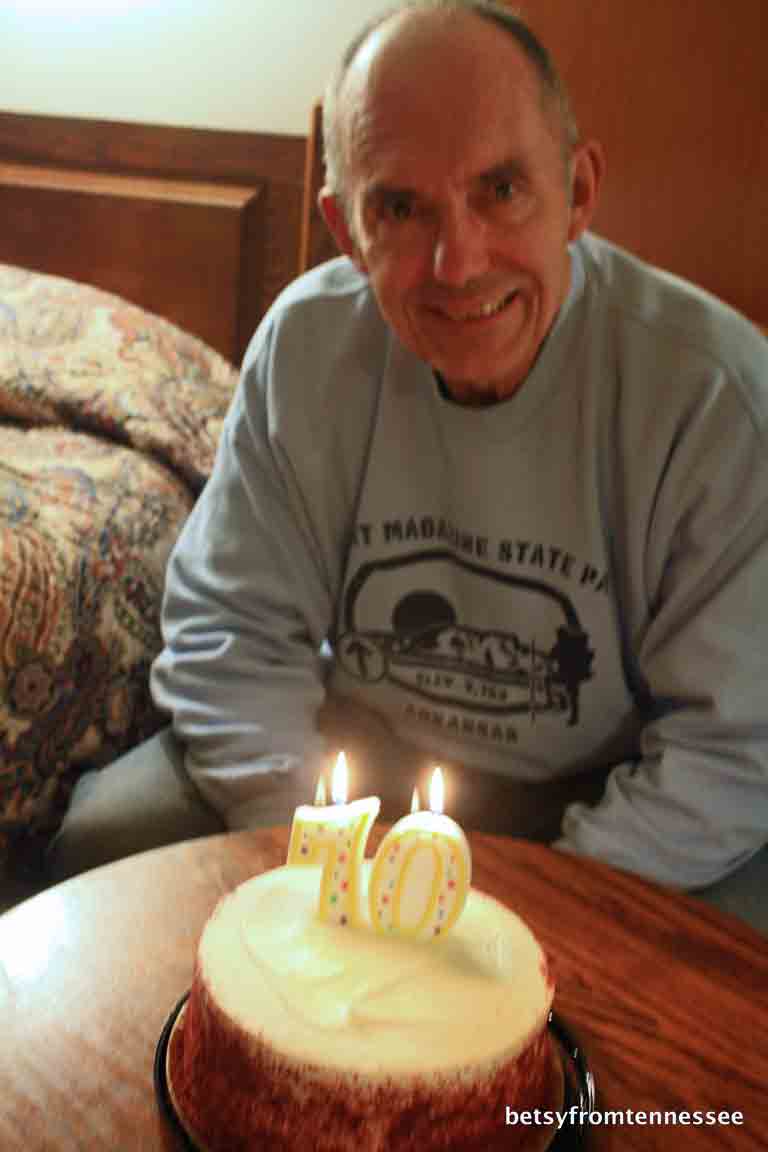 Here's a picture of George and his birthday cake. 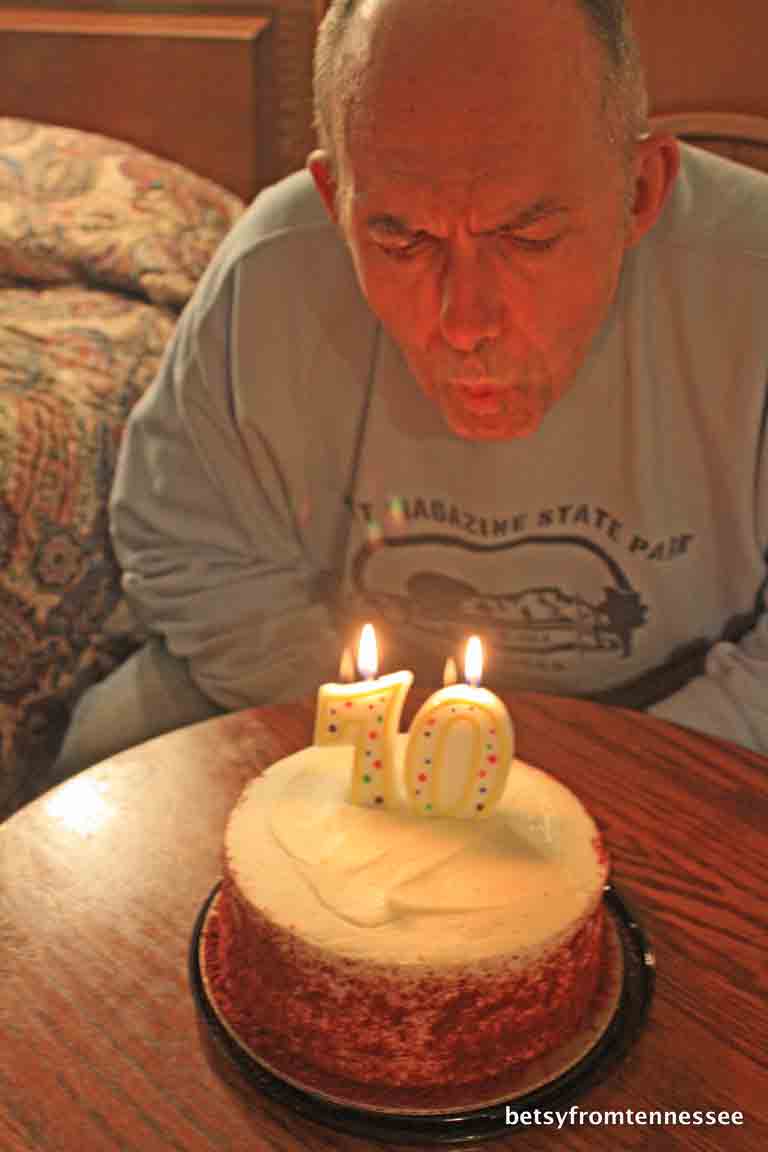 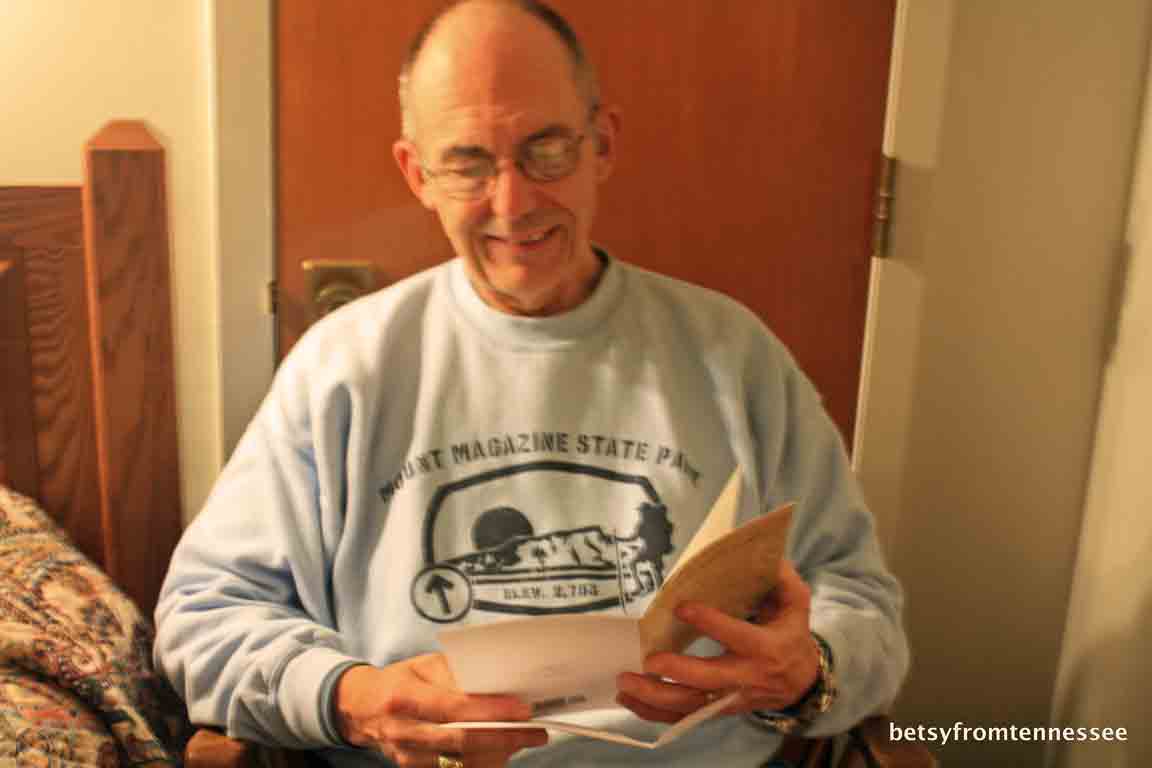 George always enjoys reading his birthday cards...  This was the end to a very beautiful day... Hope  my "Gorgeous Groom" enjoyed his special day as much as I did!!!!!

Hope you had a great week... Hopefully soon,  I'll be back to checking out your blogs and trying to catch up with you and your life...  Thanks for being patient with me.