Catching Up ---Christmas and Beyond

Sorry I have been missing in action lately---but wanted to share some pictures from our month with you today.  Despite my knee problems and knee surgery (Jan. 8),  we did have a great Christmas and so far,  January has been good also.

The picture above was taken on December 29, 2014 at the Cracker Barrel Restaurant in Nashville,  Tennessee.  Ruth Heibert  (Ruth's Photo Blog) and friend Gwen came to Nashville to attend a special Gospel Music Convention.  SO---since we are only 2.5 hours from there,  George and I  drove over to Nashville,  picked them up at their hotel and took those two Canadian ladies to the Cracker Barrel for a good ole' southern dinner..... They both enjoyed Chicken and Dumplings for the first time ---and CORNBREAD.    (Can you imagine ANYONE going through life without cornbread????? ha ha ha)

I have met LOTS of bloggers (and I love all of you) --but Ruth and I have been very special friends for many years ---back when we both started blogging... To say that finally getting to meet her was special is an understatement.  She is EXTREMELY special to both George and me.  We love her so much---and are already thinking about when we will meet again. Thanks, Ruth,  for coming to Tennessee!!!!!!  Come back SOON.


The next day,  December 30,  George and I drove to Chattanooga to meet up with two of my three sons and their families...   Seeing these adorable grandchildren just made Christmas for this Grammy!!!!!  Aren't they beautiful --including Bay Lee's tiny little doggie!!  Landon and Avery are Jeff's children and Bay Lee and Brooke are Mark's children.  We were SO glad to see them and spend the day with them.

That same week (on January 2)---George and I drove back to Nashville to celebrate Christmas,  New Year's AND Kelly's Birthday (Jan.1) with them.  It was a cold and dreary day ---but we had a great time,  having a delicious lunch/dinner at the Dan McGuinness Irish Pub in West Nashville.  George and I both enjoyed Shepherd's Pie --which we hadn't had in a long time... It was a great day!


After all of the other trips we had after Christmas,  Christmas Day was spent at home with just the two of us enjoying one another.  I went 'away' from tradition this year (yipes) and we had a delicious Honey Ham (instead of turkey),  some scalloped potatoes,  green beans,  sliced tomatoes, baby carrots, pickles and cranberry relish.  For dessert,  we enjoyed some Dutch Apple Pie with vanilla ice cream on top... YUM...  (Since we still had turkey left-over from Thanksgiving,  we decided that ham would be a nice change.  And it was ---although I struggle with changing traditions... ha)

I gave George this nice lens ----but somehow,  his bride has already taken it away from him... He 'wants' me to use it so that I won't have to change lens so often... If I like it,  I may just have to buy another one for his birthday for HIM.... ha ha


George gave me lots of really nice things for Christmas ---and this was definitely one of my favorites.  Since I collect WILLOW Angels/Figurines,  I was thrilled to get this one (which I had never seen before).   Reminded me of a widow of a United States Military man killed in action.. Makes me cry!!!!  OH how I appreciate our Armed Forces and what they do for us...  Isn't HERO a gorgeous figurine?

Besides many day trips and short trips in 2014,  George and I took 8 longer trips.  Six of them are on the ornament on the left:  Strasburg,  VA and the Shenandoahs;  West Virginia (Cass Railroad) for our anniversary;  Maggie Valley NC and the Blue Ridge Pkwy with friends;  Mt. Nebo, Arkansas with friends;  Blowing Rock, NC  for my birthday;  and Hocking Hills,  Ohio for George's birthday.   The ornament in the middle was from our trip to  Texas to visit 2 sons/families in Sept.   AND the one on the right is from our beach trip in May to Ocean Isle,  NC.  That cute ornament made me laugh since Santa is dressed up with his beach attire.  We had planned to go back to Ocean Isle the first of December --but my 'bum knee' cancelled that trip temporarily.


I just had to include this funny picture of sons Jeff and Mark on December 30 in Chattanooga...  That was such a fantastic day together as a crazy family ---which we are... My sons were in RARE form telling stories about their childhoods and lives... I've never laughed so hard in my life.  Of course,  I told a few stories myself that day!!!!!!

After looking at this photo,  you will know where those two funny guys in the picture above this one get their craziness.... Do you think their Nutty Mama had anything to do with it????????? (Don't answer that!  ha ha)

Speaking of a Nutty Mama,  I was barely standing and not doing much walking on Christmas morning... But---how could anyone keep a crippled girl from dancing on Christmas?   (I do think that George was there to catch me if I fell!!!!! ha)

What brings families together more than anything else?  FUNERALS.....  My sons' wonderful Grandmother died and her funeral was that day in Knoxville,  TN.  Laura Wilhite (age 99) was loved by all,  including me (since she was my ex-mother-in-law) and my sons and grandchildren.

Even though I was still re-cooping after surgery,  I cleaned up and we went to the funeral... I did great that day --but really felt the pain the following day... BUT--it was worth it and I am very glad I went.  Just having my sons with me for a few hours was worth everything.


Finally,  I want to wish each of you a Happy 2015.... I INTEND to have a great one.  I apologize for being away from blogging for so long. To look at all of these pictures,  you'd think I was doing GREAT... Truth be told ---it has not been easy for me.  I will do an entire blog about my knee/surgery/recovery, etc.  sometime  AFTER I am totally well and back to myself again... But--just know that I am okay and am gradually getting better and better.  Thanks be to God.

I will try to be back to blogging again sometime the first week or two in  February.  In the meantime,  be sure to check out my January quotes on my sidebar.  There are some good ones...

Thanks for all of the comments/emails/Facebook comments/messages/texts,  etc... George has even had people asking about me on his blog.  That is SO sweet that so many people care.  God Bless You ALL.  I have so many wonderful friends.

A New Year Brings Surgery for Me 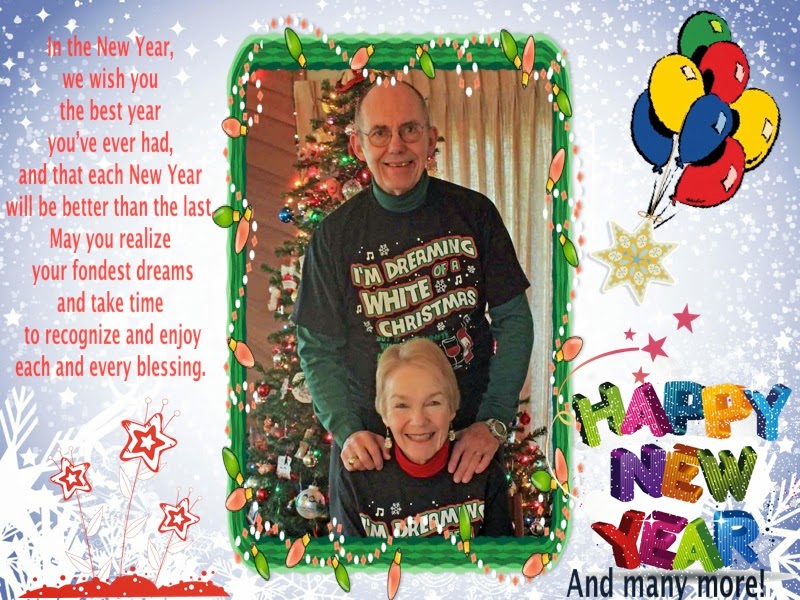 Happy New Year from George and me to YOU and YOURS.  I hope that 2015 will be a fantastic year for all of us...  I don't make New Year's Resolutions -but if I did,  mine for 2015 would be to have a better year health-wise... I try SO hard to eat right,  watch my weight, get lots of exercise, and stay healthy.  YET in 2014 --I had Gallbladder Surgery,  and on November 21st,  I twisted my left knee,  which ultimately is leading to another Meniscus-Tear Surgery on JANUARY 8, 2015...

I already had meniscus-tear surgery on that same knee in 2010,  so I know what I'm getting into....  AND---I'm 'okay' with this surgery.  It's out-patient and the recovery time is not too bad...  As you know,  I've had LOTS of pain with the knee this past month and a half---so I'm ready for ANYTHING to give me some relief.   AND---since I'm an active person,  I am ready to get out there and do some HIKING again!!!!!

Thanks for all of your prayers for me during this time of my knee problem... God Bless ALL of You.