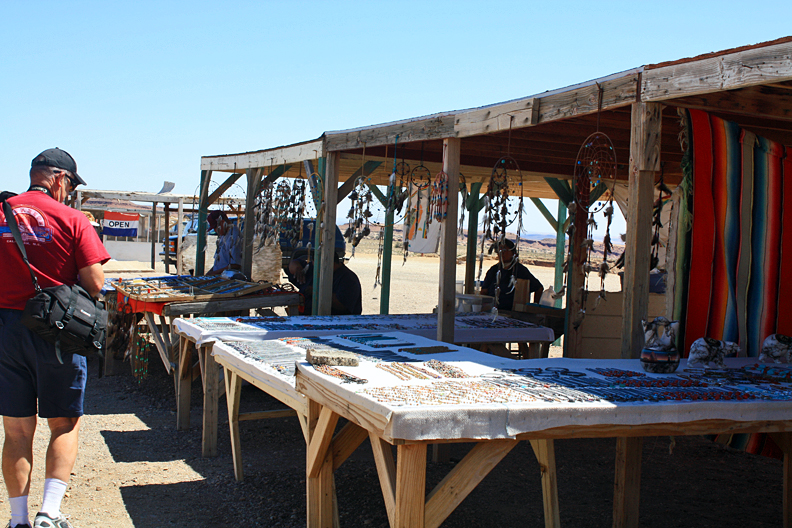 When we left Holbrook, Arizona on June 14th,   we decided to take another back road to the Grand Canyon.  So--we drove to Flagstaff and then headed north on Highway 89 and then west on Highway 64 to the eastern entrance of the canyon.

Anyhow--like we always do,  we found a neat place to stop that morning.  That whole drive is gorgeous and the land in that area belongs to the Navajo and Hopi Indians.  We stopped to see the Little Colorado River Gorge --which is operated by the Navajo Indians.

The Little Colorado River originates at Mt. Baldy in Arizona's White Mountains (near Springerville) and travels northward through Joseph City,  Winslow and Wupatki National Monument before reaching the Colorado River in the Grand Canyon.

There are HUGE differences in the two canyons.  As opposed to the Grand Canyon,  this gorge is remarkably narrow.  It is so narrow in fact that visitors that approach the edge are astonished at the deep abyss that is below them.  The Little Colorado travels through this narrow canyon ---but while we were there,  the river was as dry as a bone!!!!

The geology of this Gorge sets it apart from the Grand Canyon also.  Whereas the Canyon is a massive sand art painting with layer upon layer of rich, deep hues cutting horizontally across its jagged edges,  this Gorge is mostly gray and back limestone layers at the top, with smooth, colorless sandstone at its deeper levels.

The Navajos have lived in unity with the Gorge for the past 1000 years. Their Parks and Recreation Department operated the Little Colorado River Tribal Park  alongside the Gorge, and maintains the overlooks which are equipped with picnic tables for travelers.

As you can see from the picture above,  George is admiring some of the tables  which were set up  for the native artisans to sell their wares. We didn't buy anything --but you can find unique pieces of silver and turquoise jewelry, original pottery and hand woven blankets there.  The people were friendly and loved talking to us tourists. 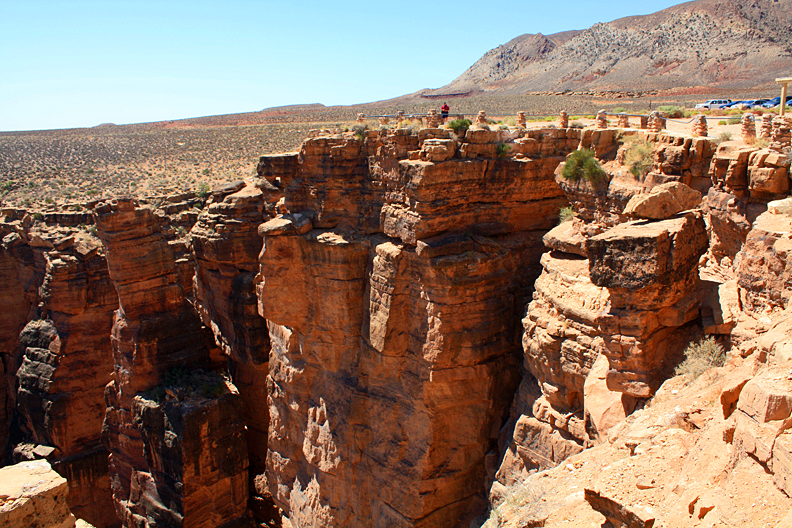 Here  we had our first view of the Little Colorado Gorge.  I went one direction to take pictures and George went another... We were impressed at how well-maintained the area was.  Can you see George in this picture???  He's standing almost at the left end--with a burgundy-colored shirt on... 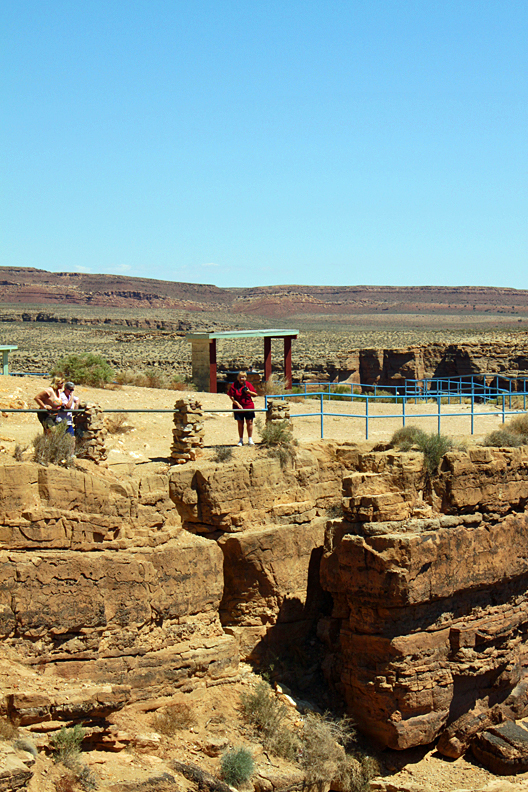 Of course, since I took a picture of George,  he also had to take a picture of me---although he zoomed in a little with his camera.  See me there?  The covered area behind me contained a picnic table..   However,  nobody was having lunch there that morning.. Could it be because there was a SNAKE under the table????  (I'll show that picture at another time.) 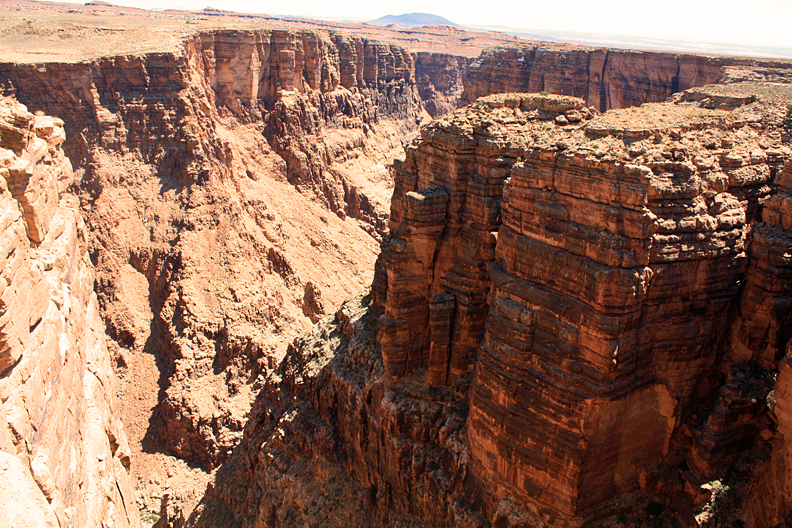 This picture shows a little of the depth of this narrow canyon...  YES---this one was much different from the Grand Canyon nearby!!!!  But--it truly was breath-taking. 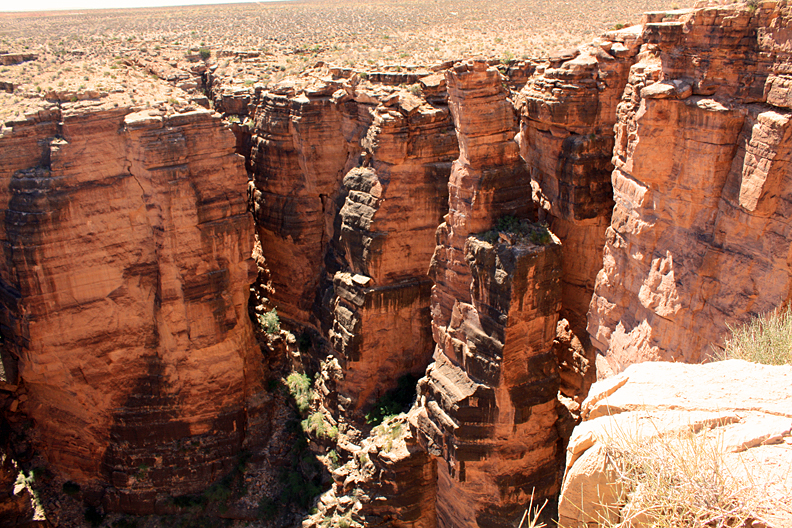 Don't think we should try to climb down that gorge,  should we????  Yipes!!!!  But--there are some great hiking areas around here --luckily,  not straight down though. 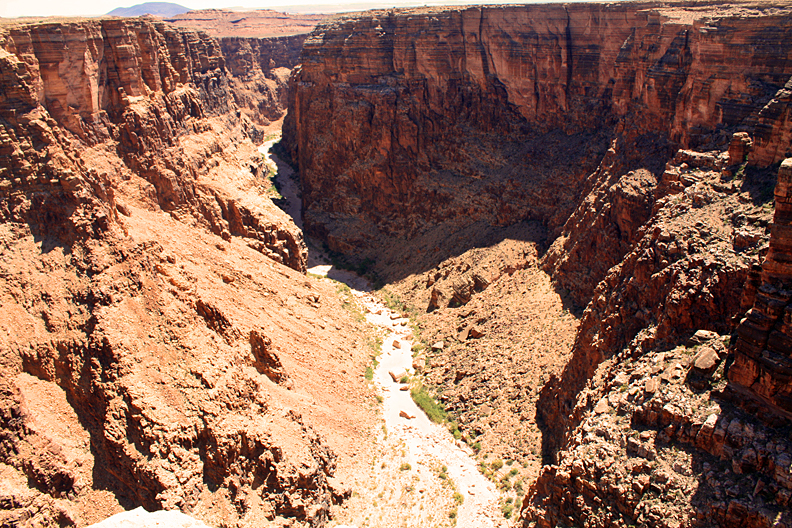 You'd think by looking that there was water in the Little Colorado River below...  NOT a DROP... They say that there can be alot of water during the rainy seasons (early spring, and late summer or fall)...  We want to go back!!!!!!  Wanna know why?????  WELL---we found out that there is a huge WATERFALL (Grand Falls) south of here  which is dry now --but gorgeous during the rainy seasons.  We saw a video of the 185 foot Grand Falls on the internet ---and it is FABULOUS... SO????  We must go back.  Right??????

Also--during the rainy seasons,  the rafters and kayakers love the Little Colorado River --as it makes a rapid 2000 feet descent over about 30 miles to the Grand Canyon (from the Cameron, Arizona area)!  They say you can hear the sound of rushing water all around the canyon as the water rushes through there.  Wouldn't that be SUPER to see and hear???? 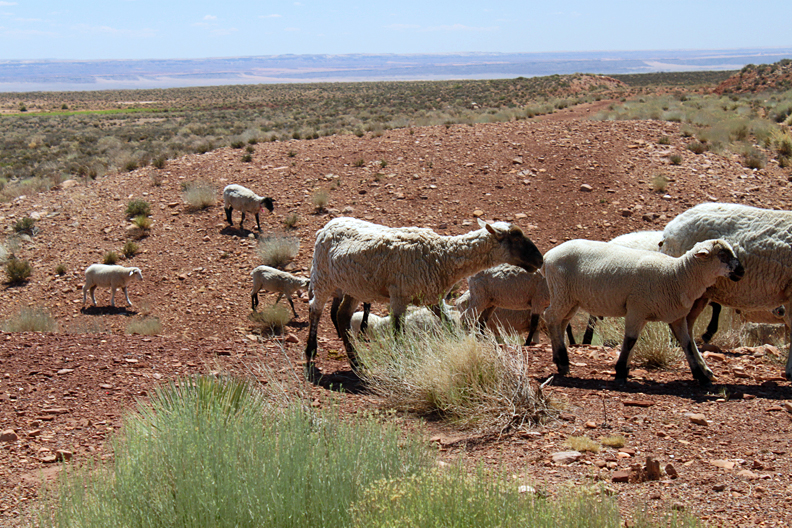 We were surprised to see a sheep herder and some sheep crossing the road --as we left this area.  Look at that desert...  Gorgeous ---but so different from the hills of Tennessee!!! 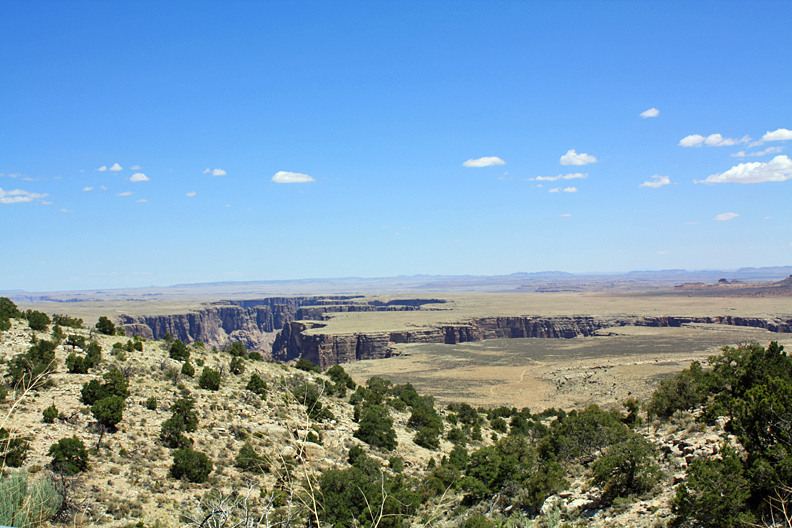 Finally, this was just one of the many views we saw as we left that area ---headed for the Grand Canyon.   This section of the Gorge between where we were and the edge of the Coconino Plateau can be as deep as 800 feet, and it is about 800 feet wide in spots also.  That is the only place where the canyon is this large.  They say that the lower gorge (east of Highway 89) is more spectacular but much harder to reach,  requiring long drives across unpaved roads in the Navajo Reservation.  BUT--we will do it since that is how you get to Grand Falls!!!!!

Again I say:  Get off of the main roads and check out some of these gorgeous areas of our country.  We really enjoyed our visit here.   Hope you enjoyed seeing some of this area.