One disadvantage of taking SO many pictures when on a trip is to go through them and pick out six that you want to use on your blog.... That is HARD!!!! ha.. We stopped at most every overlook --and luckily, we have one of those neat Geotaggers ---which marks our pictures (so that when we go back to look at them, we'll know where they were taken. That helps SO much!!!
As I have said several times, if you haven't seen my other posts talking about our fabulous trip from August 5 (my birthday) through the 8th, to the Blue Ridge Parkway and Skyline Drive areas, please go to my sidebar on the right, scroll down to labels and click on the label marked, Birthday 2010.
Today, I'm sharing more pictures taken along the Blue Ridge Parkway... We got on the parkway at Floyd, VA (south of Roanoke). Above is a map of the Blue Ridge Parkway in Virginia. You can see the Peaks of Otter where we stayed the first night. Once you get north of Charlottesville, the parkway changes to the Skyline Drive (shown in yesterday's post). Below are more pictures (not in the order taken along the parkway)! 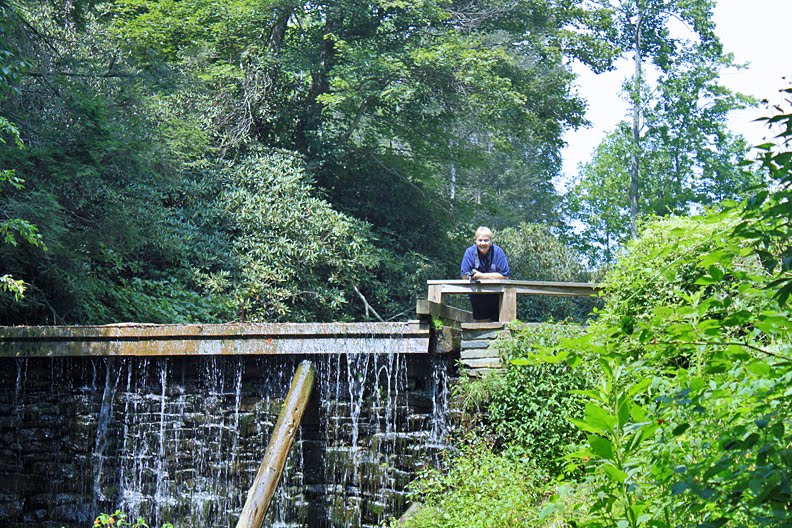 This is an old grist mill area called Rakes Mill Pond. You can see the stone-facing on that dam. It was built early in the 19th century by Jarman Rakes, a miller. He allowed customers to fish for brook trout in his pond while they waited for their grist. 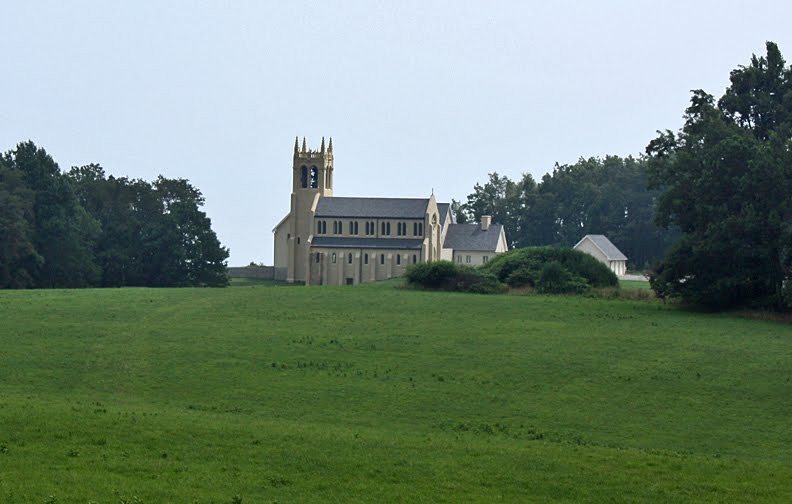 I had to search and search to find information on this gorgeous church... I finally found it online. It's the Syon Abbey, a Catholic monastery located east of Christiansburg, VA. The monastery is a home where peace is the motto. It's that peace which the world cannot give. The premier activity of the monks is worship. They also live by the labour of their hands, growing all of their own food and preparing it for the table.
The monastery is the house of a family of brothers living under the rule and guidance of a father, their Abbot. The Community now at Syon Abbey began its corporate life in Kentucky in 1962. This beautiful monastery was built in 2002/03. If you visit the monastery, you will find that the monks are very happy men. I can understand why---after seeing what a fabulous setting the monastery is in, here along the Blue Ridge Parkway. 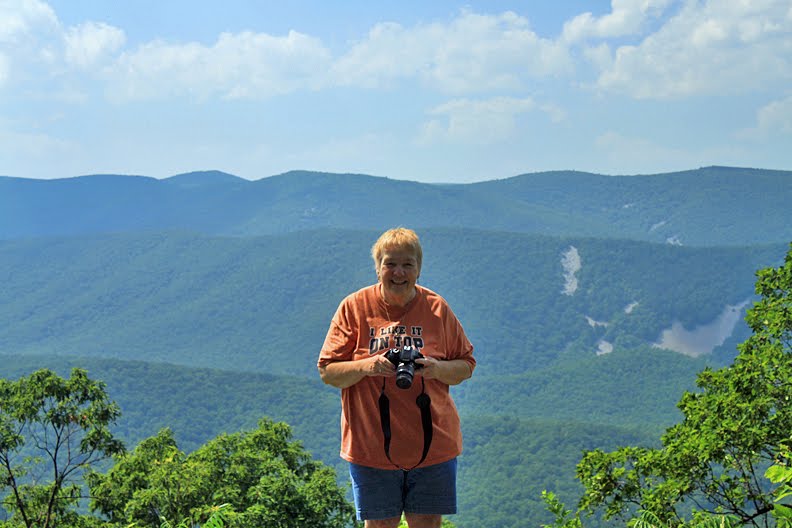 See those 'holes' in the mountains???? That is talus.... Remember me talking about that --when we were 'waterfalling' in the Savage Gulf????? Talus is a sloping mass of rock fragments along a cliff area. Believe me--you CANNOT walk on Talus!!!! Yipes! This picture was taken near Humpback Rocks. 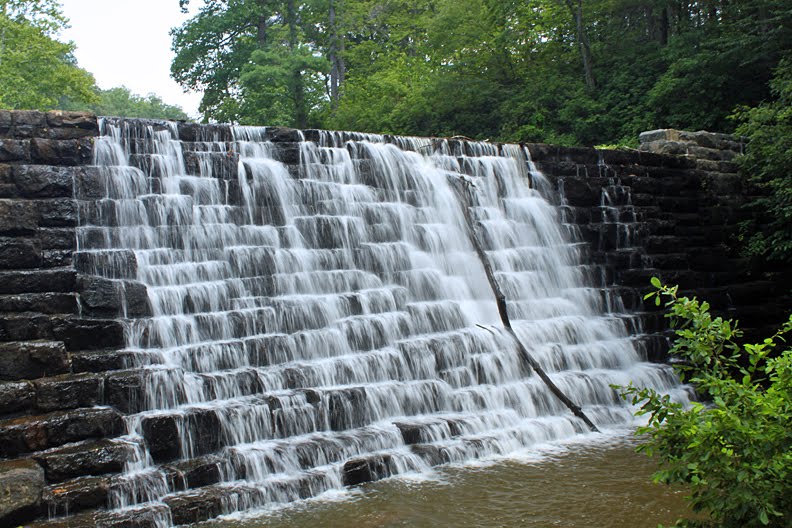 This is the closest we came to seeing a waterfall on this trip... Aren't you shocked???? ha... We have visited several waterfalls along the Blue Ridge Parkway in previous years. This little beauty is called Otter Creek Dam. Isn't it pretty???? Otter Creek tumbles 10 miles down the Blue Ridge to the James River. 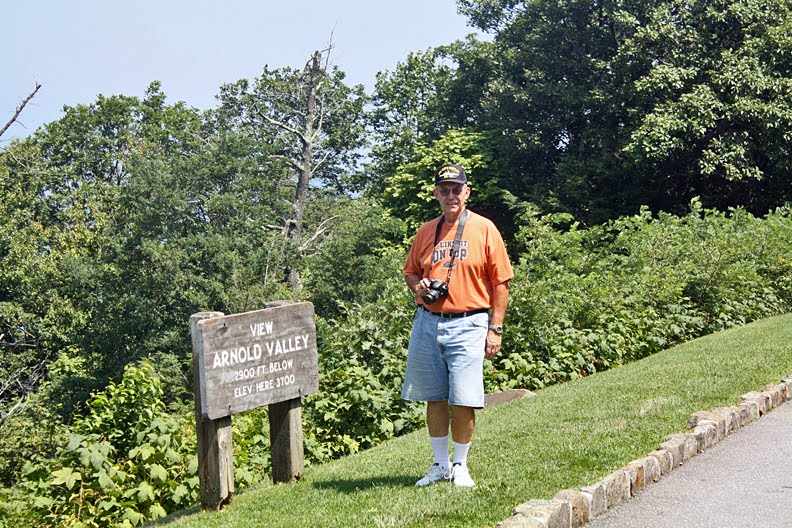 This overlook looked down on Arnold Valley below. We were at elevation 3700 feet. The valley was at 2900 feet. We were north of the Peaks of Otter and south of the James River Visitor Center which is the lowest elevation along the Parkway at 649 feet. 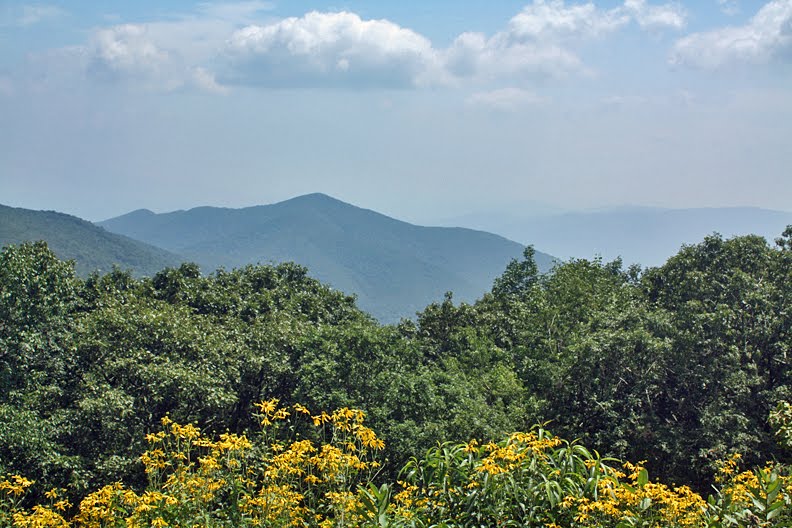 This was taken at the Apple Orchard Mountain overlook. I did see some apple trees along the parkway in other areas --but what I loved about this photo was the wildflowers along the road. Aren't they pretty. This is the highest elevation in Virginia at 3950 feet.
On Apple Orchard Mountain, wind/ice/snow of raging winter storms have pruned this mountaintop forest, giving it an 'old apple orchard' appearance. However, this 'orchard' consists primarily of gnarled lichen -covered northern red oak trees.
++++++++
Hope you are enjoying our 'journey'... I love researching the area --so that I not only can show you some pictures, but also can tell you about them.
Have a wonderful Tuesday.
Hugs,