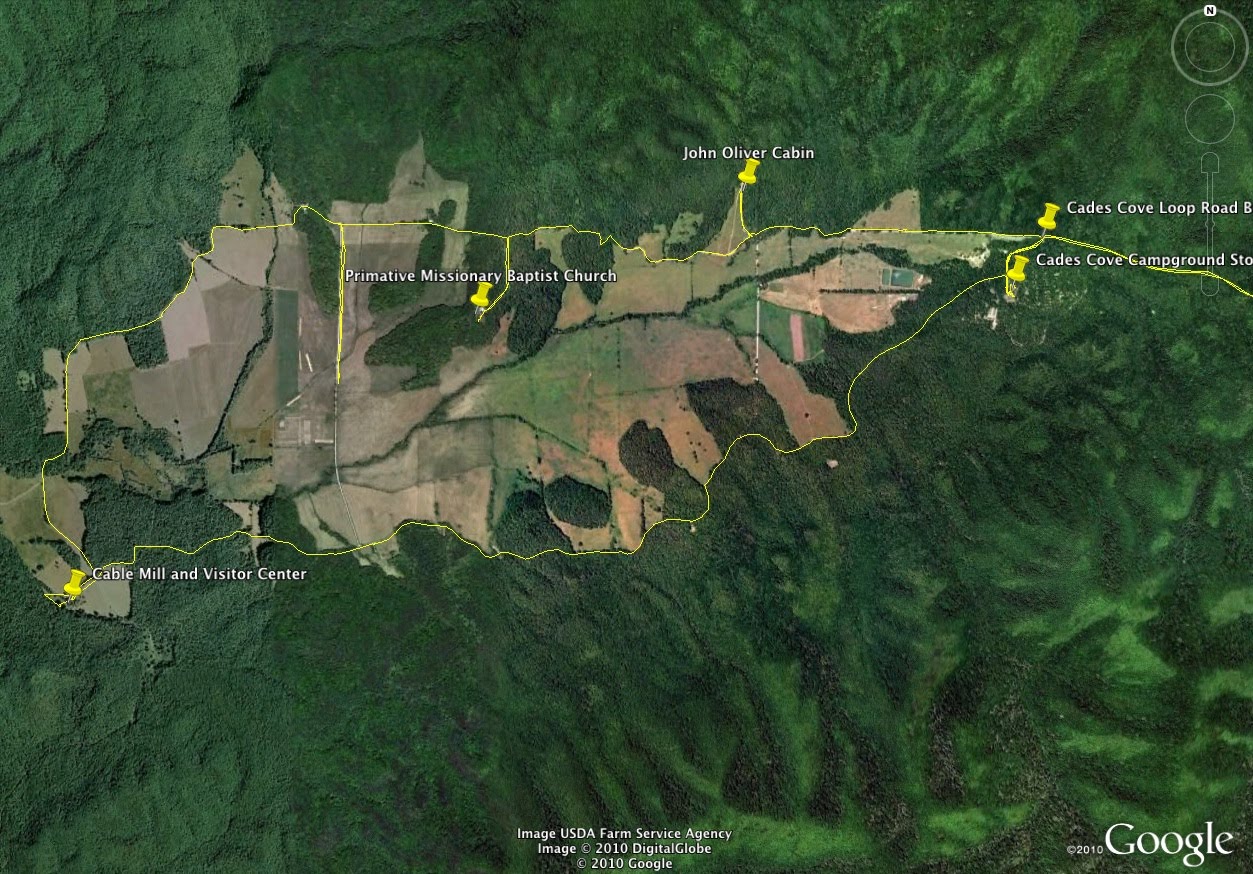 This will be my ninth post from our August trip to Cades Cove in the Smoky Mountains, TN. After this post, there will be one more, and then that will conclude the blog posts talking about this wonderful, historical place. IF you missed any of the other posts from Cades Cove, you can scroll down on my right sidebar to Labels --and then click on Cades Cove 2010.
These last two posts are from one of the most popular stopping places along the 11-mile loop tour in Cades Cove. The picture above shows the loop --and you can see the Cable Mill stop at the bottom left corner. George made this map from Google by using our Geotagger--following our route. Below are more pictures with some information I have put together about the area. 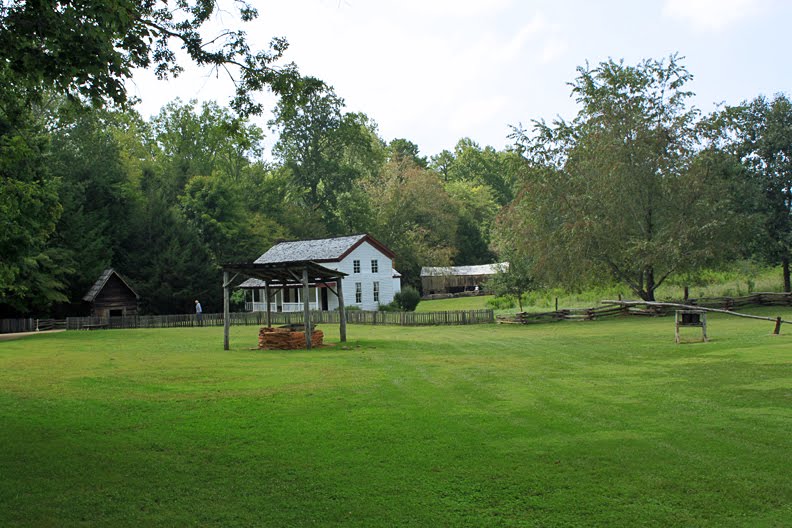 Looking at the Gregg-Cable House in the distance (talked about in a previous post), you can see the Sorghum Mill on the right. Molasses-making was a social event. The sorghum cane stalks were cut in the fall and stripped of their leaves. Then they are run through the rollers of the mill, powered by horses or mules ---pulling the long pole, and going around in a circle.
The rollers pressed out the cane juice, which was boiled in the furnace (center in photo). Other native sweeteners were honey, maple syrup, and maple sugar. Trees whose nectar made great honey were sourwood, basswood, and chestnut. I showed the house and talked about its history in a previous post (click HERE), but hadn't shown the interesting chimney. Seldom do we see a chimney built from river rocks... Isn't this one neat???? 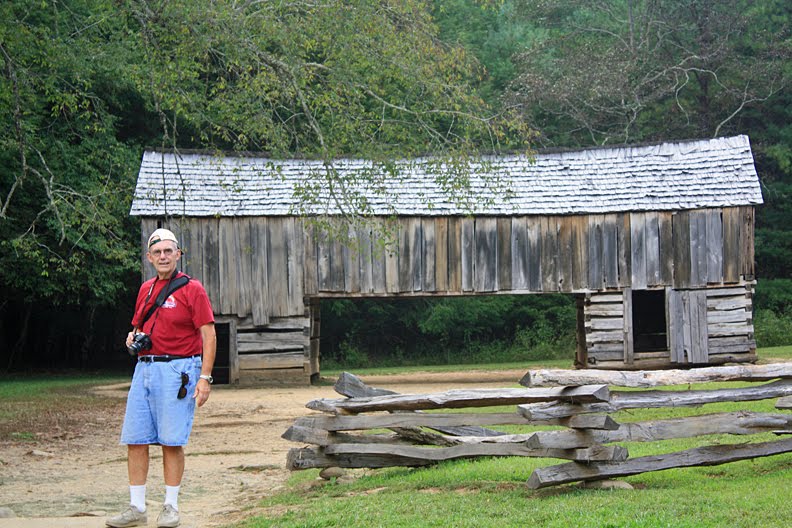 George is standing at one of two barns on this property. This type of barn, with the drive-through in the center and the stalls on each side, was more typical in East Tennessee than the cantilever barn. Two men with pitchforks, one on a wagon load of hay in the drive-through and the other in the loft, could transfer the hay to the loft in a short time.
The hay was fed to draft animals and milk cows in the stalls below during winter months when grass in the fields was poor. The drive-through sometimes served as a storage place for farm equipment. 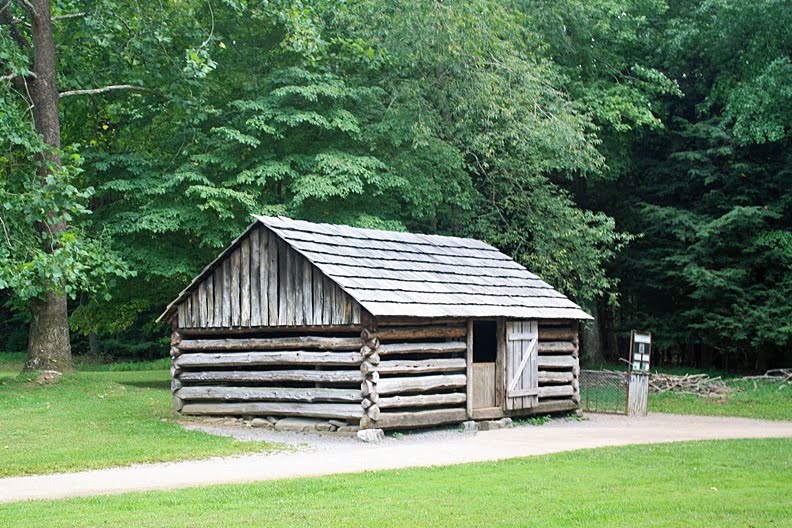 This was the Blacksmith Shop. Iron was essential in the Cove, and the blacksmith was its master. Every farm community had a blacksmith. With his strong muscles and heavy hammer, the blacksmith shaped white-hot steel into the tools of living: axes, knives, bolts and bits, chains and hooks, the bull tongue plow and the wagon tire.
Iron from the fire is very malleable, capable of being shaped and reshaped from one tool to another. A broken crosscut saw can be remade into butcher knives; a worn-out hatchet can become a hammer, provided there is a blacksmith to perform the magic. 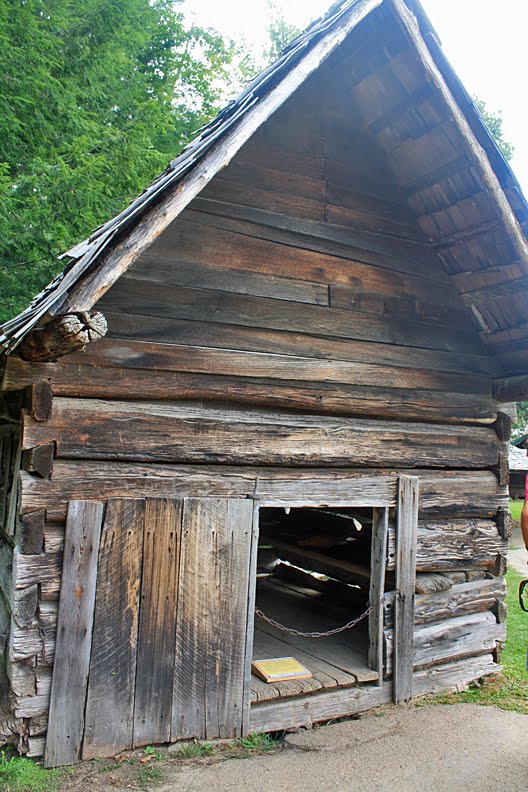 This is the Smokehouse. It was where large sections of hogs were cured by smoking or salting and then stored for use until the next hog-killing time, usually during a cold spell in November or early December.
IF you wanted ham for breakfast, you carried a butcher knife to the smokehouse, took down a ham and cut off as many slices as you needed. Large families sometimes killed nearly a dozen hogs.
The meat from deer or bear was not easily cured and was eaten fresh. People ate lots of chicken for Sunday dinner. A chicken was killed, cleaned, cooked and eaten the same day.
+++++++++++++++++++++++++++
I hope you are enjoying not only the photos, but especially the information I have provided. When I was young, I didn't care much at all about history. BUT--now that I'm older and much WISER, I can't get enough of history... Doing Family History has helped me --since I can relate my ancestors to so much of what went on here in Cades Cove. Life wasn't easy for the pioneers back then... I'll post Part II tomorrow.
Have a wonderful Thursday.
Hugs,