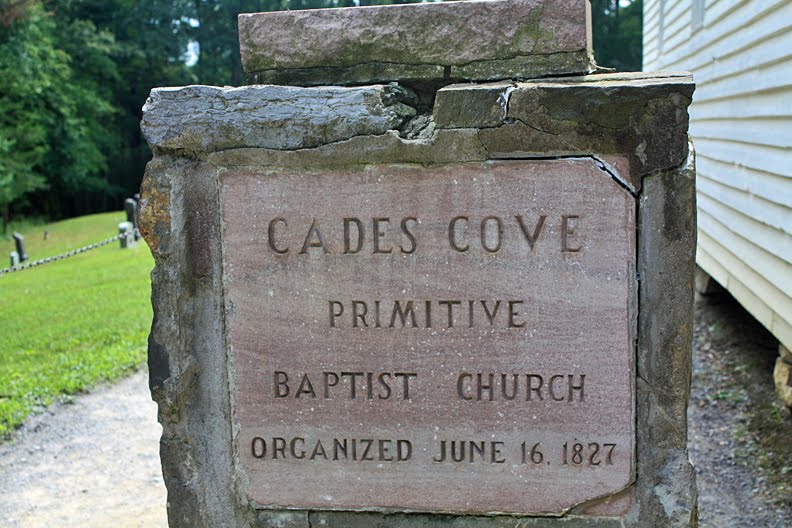 On our visit to the Smokies on August 27, we visited Cades Cove, one of our very favorite places in the Smokies. To find out more info on Cades Cove, check out one of my recent posts by clicking HERE. In that post, I showed a map of the 11 mile loop road around the cove. You will find where the Primitive Baptist Church is by looking at the map (number 3 on that map).
Today I will share pictures with you which we took at the Primitive Baptist Church that Friday. As you can see by looking at the sign pictured above, this church was established in 1827. A log building served their needs until this one replaced it in 1887. 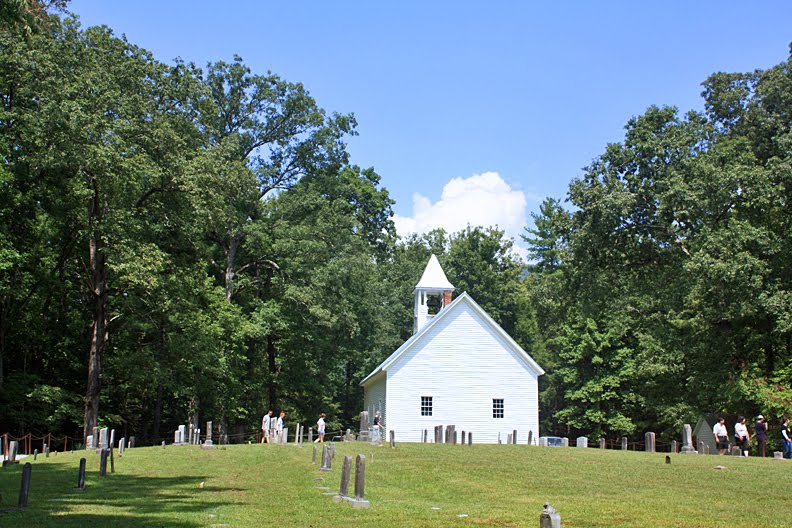 Here is a picture of the outside of the pretty little church, taken as we walked around the cemetery beside it. As you can tell, there were quite a few other visitors here on this day also. It was a gorgeous day to be visiting Cades Cove.
The church closed during the Civil War. Official church correspondence after the war explained it all: "We the Primitive Baptist Church in Blount County in Cades Cove, do show the public why we have not kept up our church meeting. It was on account of the Rebellion and we was Union people and the Rebels was too strong here in Cades Cove. Our preacher was obliged to leave sometimes, and thank God we once more can meet." 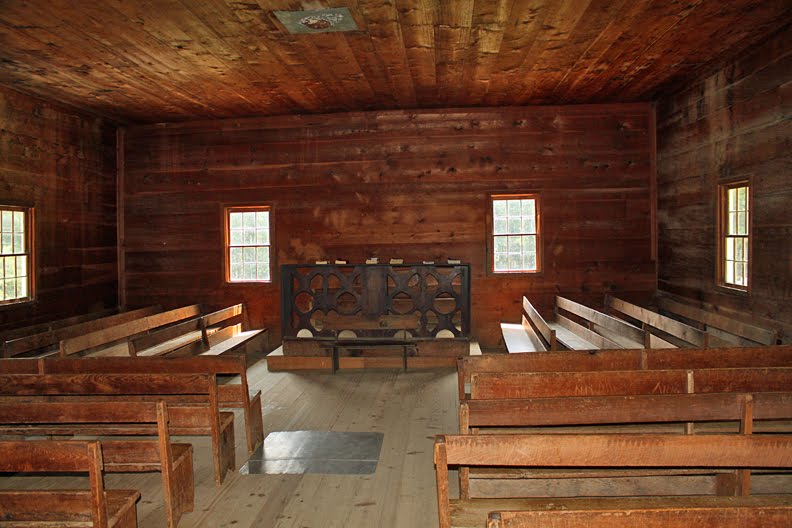 Here is a picture of the inside of the little church. I just sat down for a few minutes and thought about the early settlers in the 'cove' who attended worship here. As much as I love seeing churches, I also love visiting old cemeteries... I usually look for the oldest dates on the tombstones I can find. What I found fascinating here were the fancy tombstones, ------------ and... 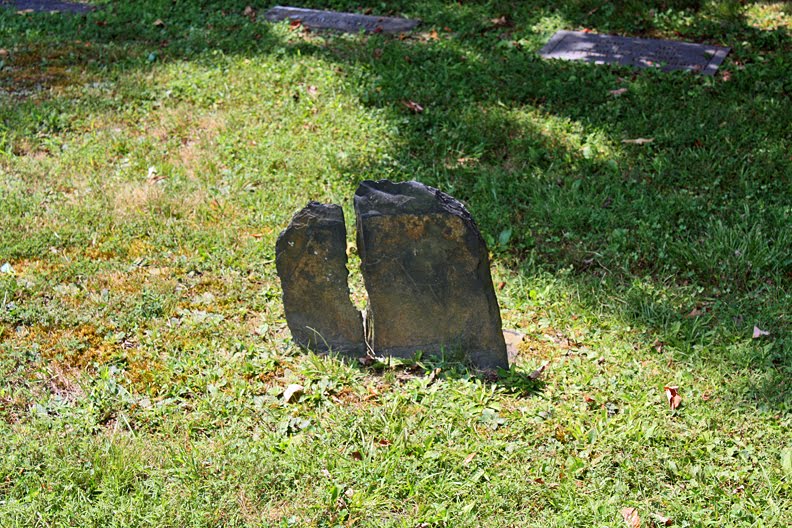 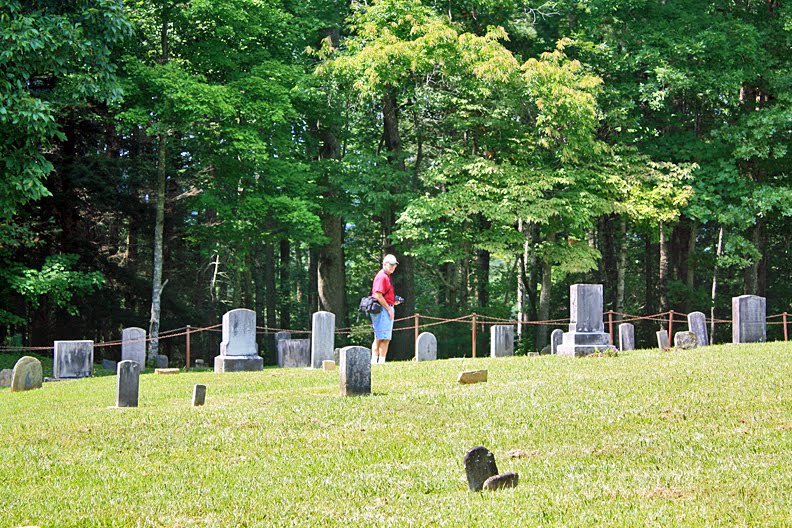 There is a walkway which visitors have to stay on --in order to see the tombstones in this cemetery. The walkway went all of the way around the cemetery... I took this picture of George, who was on one side --and I was on the other. Like me, he was checking out the information on the tombstones. 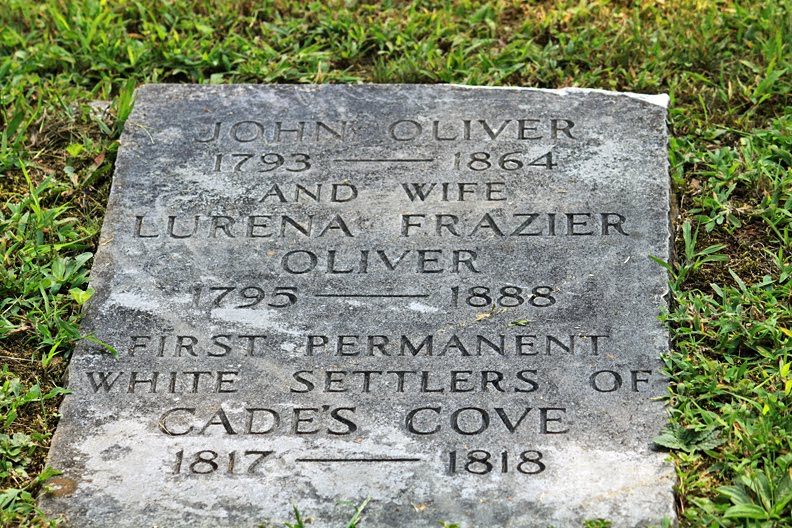 George found this tombstone of John Oliver and his wife Lurena , who were the first permanent white settlers in Cades Cove. In an upcoming post, I will show you the John Oliver cabin. 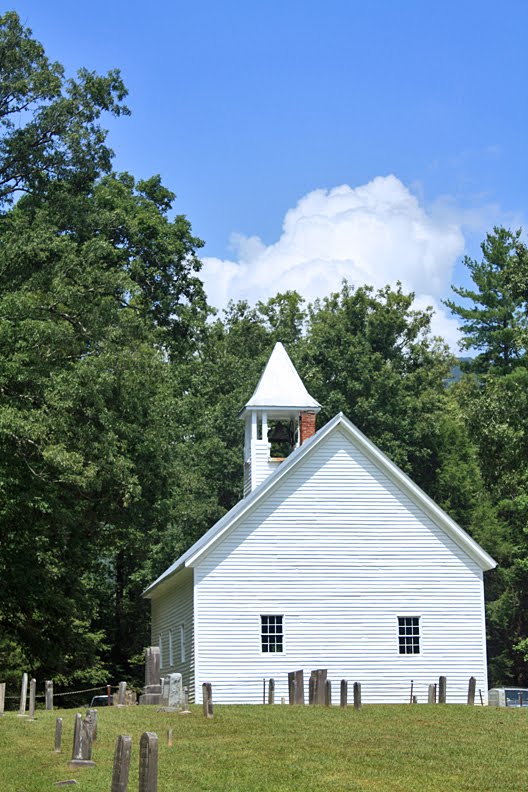 I worked hard to get one photo of the church without people in the picture.... And I did it....
Hope you enjoyed our tour of the Primitive Baptist Church in Cades Cove (Smoky Mountains, TN). If you ever get a chance to visit here, you would love it. If not, I encourage you to read some of the stories of the early settlers in this area. There are several books written about Cades Cove, and you can find lots of info on the internet... It is so fascinating, and is our HISTORY. (WARNING though: IF you visit in October, the traffic is bumper-to-bumper!!!)
+++++++++++++++++
Enjoy your Labor Day Weekend. We have no specific plans yet ---but I'm sure we will grill some brats on Monday, and I'll make some 'tater salad and some of Betsy's Baked Beans!!!!!! We may have some delicious corn-on-the-cob also!!! Other than that, we won't do much 'laboring' on Labor Day!!!!!! ha
Have a fabulous weekend, and I'll blog again on Tuesday morning.
Hugs,