Our Home --Season by Season 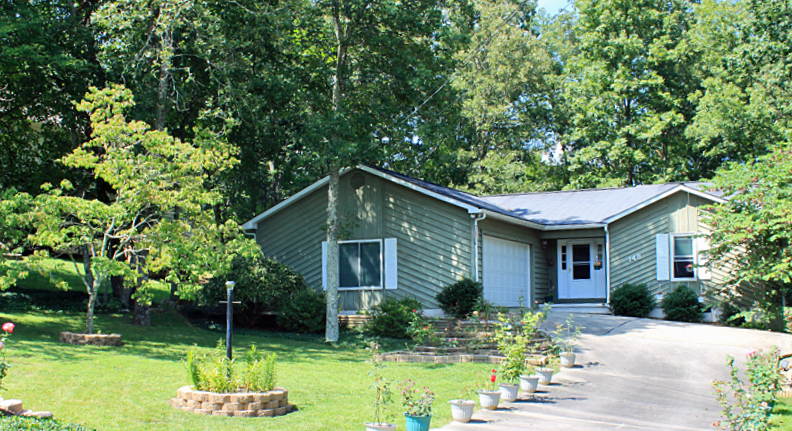 I love going back through old pictures...  Needless to say,  I have ALOT more now than I used to!!!!! (Maybe that is a good thing that I didn't have so many old pictures to go through!!!! I have too many to go through now.. Ha).... Anyhow---I wanted to show you our little home in different seasons.   One thing which I absolutely love about Tennessee is that we get all four seasons --but we don't get the extreme heat nor the extreme cold...It's no wonder why so many people retire here.  We are also 2000 feet UP --on the Cumberland Plateau,  so that is nice (especially when the temperatures in Knoxville and Nashville are in the 90's and we are only in the 80's).   Seems like the best of all worlds,  don't you think????

Anyhow here are four pictures of our home in all four seasons.  I'll begin with Summer of last year (August) which is pictured above.  As you can tell,  there's not a huge amount of color around although the roses still bloom until frost. 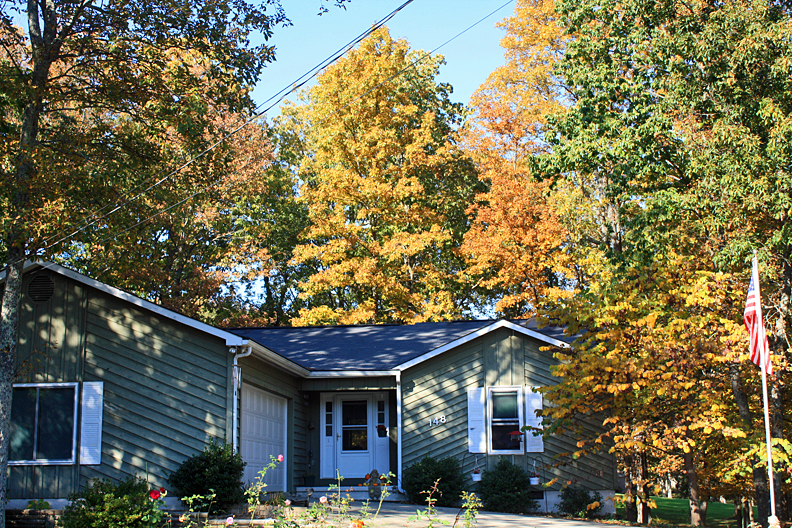 Here is a picture of Fall  (taken last Fall)--and the gorgeous colors we get up here.  It's a beautiful time of the year and a busy one for me --since I am in charge of raking and blowing tons and tons of leaves!!! 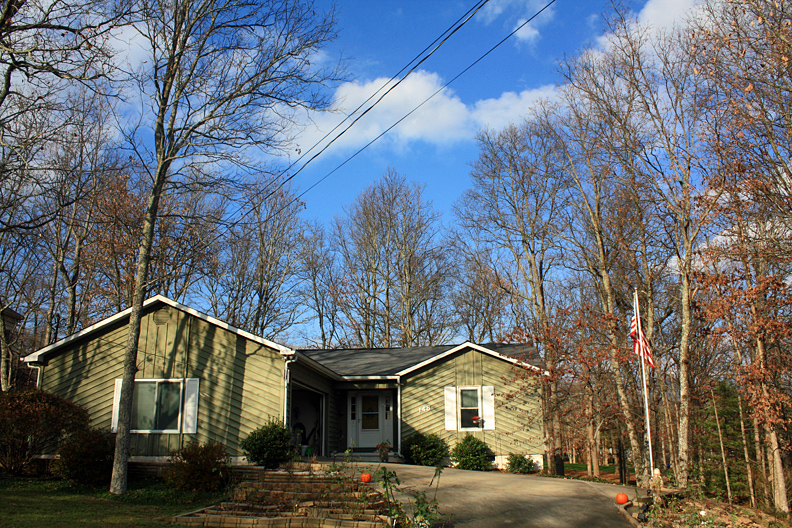 Here's a picture of late Fall/early Winter ---after the leaves were gone (almost)... I do have to rake and blow many times before they ALL come down.  As you can see (since the roses are still blooming),  we haven't had a frost yet. 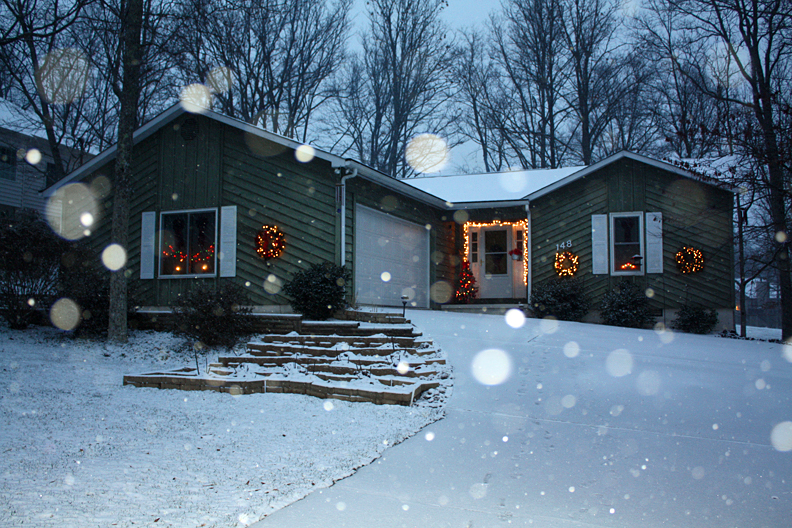 I just have to show you my all-time favorite Christmas Snow picture --taken last year in December.  I've shown this before (the others also I'm sure) --but this one makes me say "AH" each time I see it...

We didn't get too much snow last year --but what we got all came at the end of December and beginning of January.  It was a hard winter for most --but we've had worse!!!!  One way I know that is because our Fall Pansies made it through the winter and are still blooming and showing off NOW. 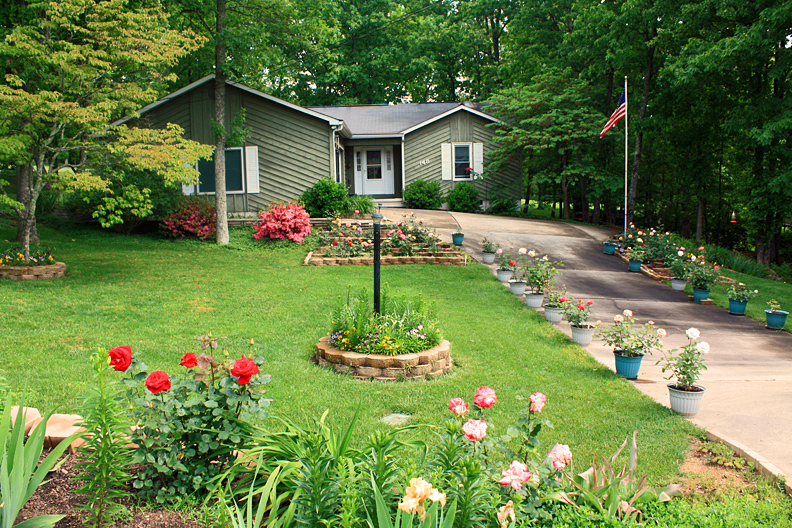 And now--we are to Spring of 2011.  Since we've had lots of rain the past couple of months,  our yard and flowers have really put on a show for us. 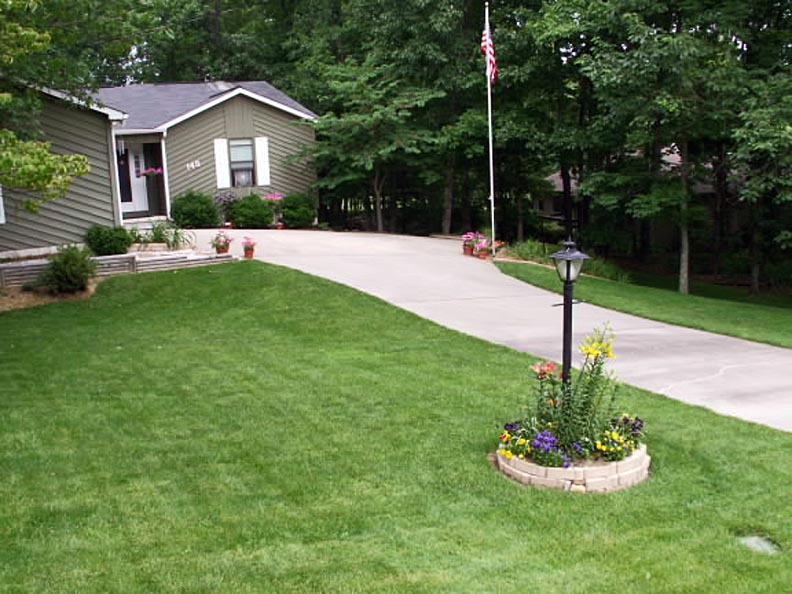 NOW---check this out!!!  This was our yard in 2006.  (Compare it with the picture above.) There were no roses yet in the front and no big road flowerbed.  We did have the 3 little round beds by then --and we had our big side flowerbed (which is where we had roses planted at that time).  The roses struggled on the side because there's just not enough sun there... So-- George started moving them to the front in 2007... This year we have over 57 different rose bushes. 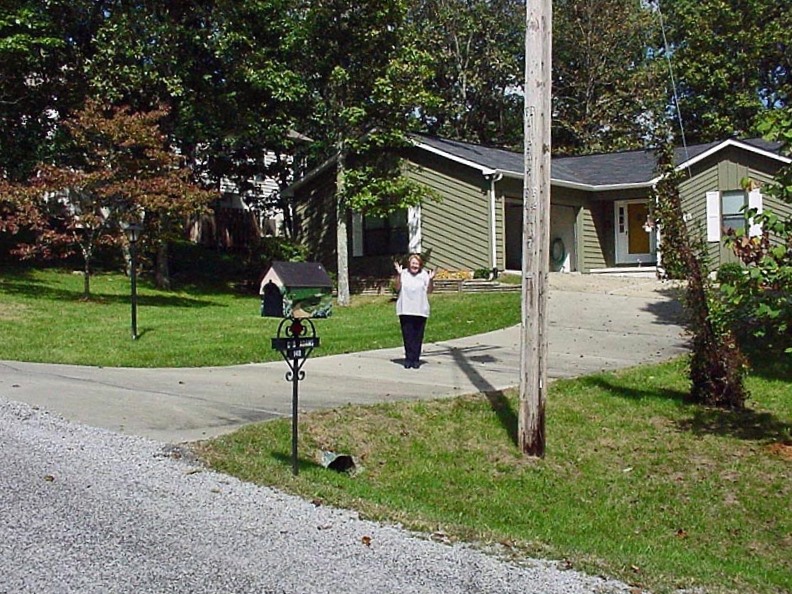 Finally, here's one of the first pictures we took of the outside of our 'new' home... OH--how much we loved it.  You can see me (this was in Fall of 1992)  inviting everyone to come in!!!!!  The little elderly couple who had lived in this house since it was built in 1985 was having to move to Arizona to be with their daughter.  The husband had had a stroke and the wife just couldn't take care of him by herself.  They were the sweetest couple--but were NOT yard people.  I think they had a lawn service to mow it --but that was about all they did.

We didn't actually move in until June of 2003--after I retired... George continued to work until 2006---so we didn't begin too much yard work until about 2005-06.  Since then,  we have stayed very busy.. It's WORK ---but oh how wonderful the results are to one's soul and heart once those little buds pop up out of the ground/dirt... AND then to give us the blooms they do----well,  you know how fabulous that is!!!!!