Continuing along Scenic Highway 12 in Utah (see map above) on our western trip in June,  we passed through the northern part of the Grand Staircase of Escalante National Monument (on June 22).  This monument is 1.9 million acres of preserved land for us to enjoy.  The Staircase where we were consists of a series of massive geological steps which descends toward the Grand Canyon in Arizona.  NOTE:  Enlarge photos (except for the first one) to make them MUCH larger!!!!

We were heading from the town of Escalante to Boulder.  This stretch of road is called the Million Dollar Highway (because the cost to build it was a million dollars).   But it is also known as Hell's Backbone Road.  This rugged area was completed by the Civilian Conservation Corps (CCC),  allowing vehicle-traffic between Escalante and Boulder for the first time.

Constructing the road was a result of back breaking labor and tons of dynamite blasting throught slickrock terrain, in the days before heavy machinery.   Construction debris were removed with horse -drawn scrapers or by hand with pick and shovel.  It took them from 1935-1940 to complete the highway.  (Do you think many people in our country today would want the job back then of building that road --almost by hand???)

Today,  most of the pavement between Escalante and Boulder still rests on original base material, and the drainage structures put in place by the CCC crews continue to move water under or away from the travel surface...   (This impresses me.  Don't think our roads these days are built that good,  do you?)

Another interesting note:  When the road opened in 1940,  it provided the town of Boulder with its first year-round mail service to be delivered by automobile.  Prior,  Boulder was the last community in the United States to receive its mail by mule train.   AND--Boulder was secluded from the north by Boulder Mountain (which I will share in another upcoming post).  That road (across Boulder Mountain) wasn't completed until 1985.  Can you imagine living in Boulder, Utah in the early 1900's???????

Along the steep stretch of Scenic Highway 12 was a section called HOGSBACK.  The road follows  along the top of a narrow canyon,  which in places slopes down with little shoulder on both sides to a 2000 foot drop.  You can see where the Hogsback is by looking at Number 15 on the map above.  The views were incredible along this stretch --but there was no stopping due to the narrowness of the road.  SO--many of my photos were taken from our moving car.  Some even have a glare or sunspot --but I still wanted you to see that area.  George calls me the "Drive-By-Shooter" (with a camera that is). ha 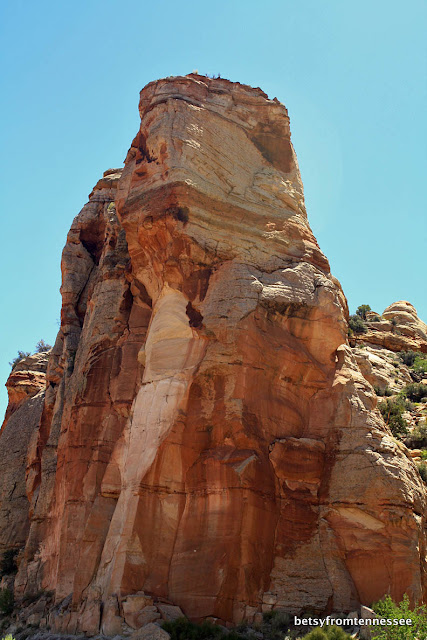 Can you imagine digging through this stuff to put in a road,  especially when they had to do it almost all by hand?????  Yipes! 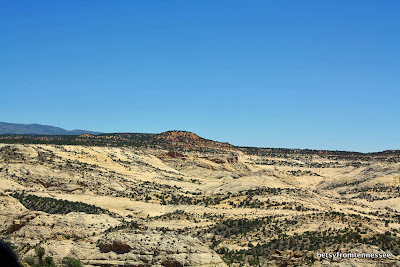 We are heading out of the Hogsback area and headed down toward the community of Boulder.  Don't these pictures make you feel like you are in another world?  It was awesome! 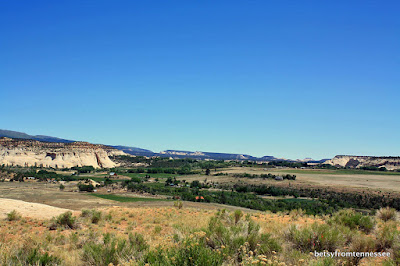 Finally, we reached the TINY community of Boulder, Utah.  As you can see,  there is nothing much here.  Boulder Town was long known as the "Last Frontier in Utah".  It was first settled in 1894 and was named for the volcanic boulders all around.   Not only was mail delivered by mule---but so was fresh milk...  Sometimes it took so long to get the milk over that mountain that it was butter by the time it reached the settlers.  Today,  there are about 189 people living in Boulder.

WELL---this is just another piece of Scenic Highway 12 in Utah. As I say frequently,  when you travel,  find those backroads--the scenic ones,  and try them ...  It was fabulous!!!!  BUT---just wait 'til the next part of our journey AFTER we left Boulder and headed UP UP UP Boulder Mountain... That will be another post.

Please click on these pictures since I have made them alot larger.  Have a fabulous weekend and I will see you on Monday