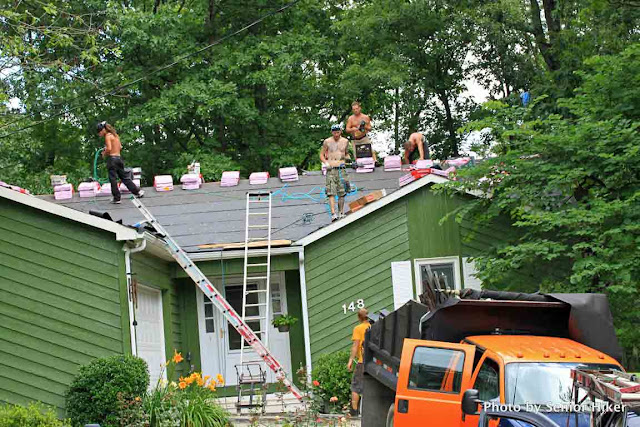 Many of you remember last Summer when we had a new DECK put on our home.  If you missed that post,  click HERE.    Then,  after we got the new deck,  we got the house PAINTED.  Click HERE to see that post.

SO---this year,  we got a new ROOF.  Hopefully,  we are finished with these big jobs for awhile, except for the staining of the deck which we hope to do sometime this summer...   (We have given up some of our longer travel plans for this!!!)   Who was it that said the we don't own the house;  the house OWNS US..   ha ha (TRUE!!!)

Today,  I'll share photos with you  from the installation of the roof.   We had been waiting for a few weeks for the roof---but Mother Nature wasn't cooperating... SO--on Monday,  July 8, 2013,  the sun came out --AND a large crew came to give us a new roof.  They got here at 8 a.m. ---and had it totally finished by 3:15 p.m.  We were SO impressed with their work --and they did a fabulous job of the clean-up.   I would highly recommend A-1 Roofing (Crossville, TN) to others in our area who need a new roof.

They had originally said that it would take about two days.  BUT--with our crazy weather this summer,  they doubled up on the crew and got it done in one day.  AND---we are glad they did it this way since we had some rain that night at 6:30 p.m.!!!!! Crazy weather!!!! And--since we got the new roof,  we have had some rain most every single day!

The photo above shows some of the crew working on the roof...  George and I both slipped out of the house and took some photos of them working. They backed the big truck up to the house to collect all of the old shingles and old skylights.  They also had big tarps around the house to collect anything that dropped from above.  They had a little elevator (with the help of a generator) which took all of the shingles up on the roof.   They seemed very organized and all of these guys had their own jobs---and all worked hard!!  (Be sure to click on all photos for enlargements.) 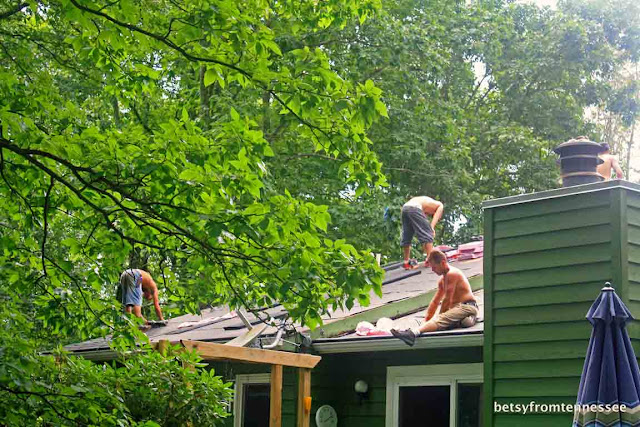 Here is a photo of them working at the back of the house... Like I said,  there was a large crew here... 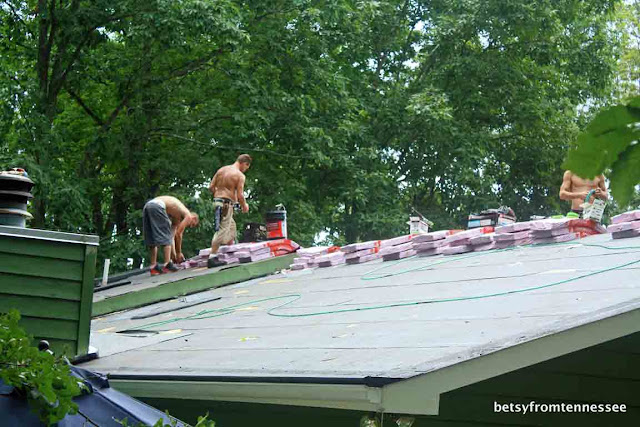 This is another photo of those hard-working young men...  I took this photo from the  backyard --on the upper side. 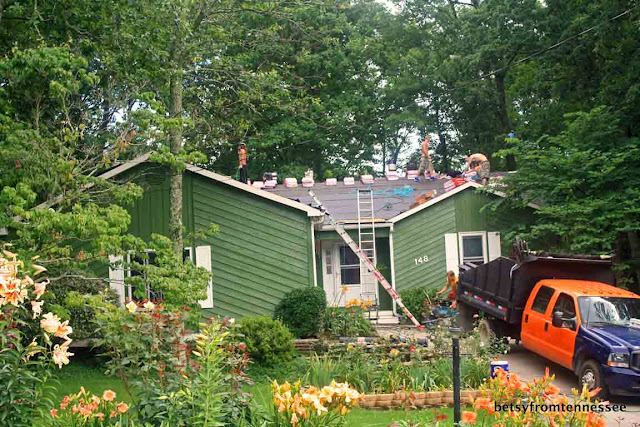 Here  is one more photo of the hard workers ---which I took from the road,  looking toward the front of the house. 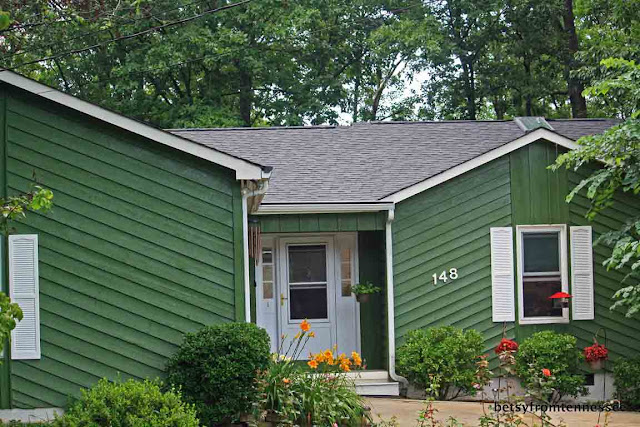 This next set of photos were taken AFTER completion.   We love the new roof ---and the color is a Charcoal/Black.  In some shadows, it looks dark --and in certain other lights,  it looks lighter.  I wanted DARK ---and didn't want green,  so we are happy with our choice.  It's similar to what was on the roof --although the old shingles had more of a bluish look--which we did NOT want. 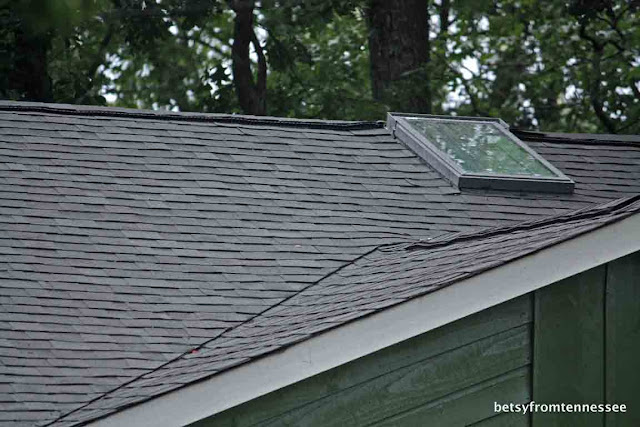 This is a close-up of the shingles and one of our TWO new skylights.  We had skylights before --but they were made of plastic and were OLD and dingy... They needed replacing.  The workers also replaced some old wood around the fireplace...  The new skylights are WONDERFUL.... 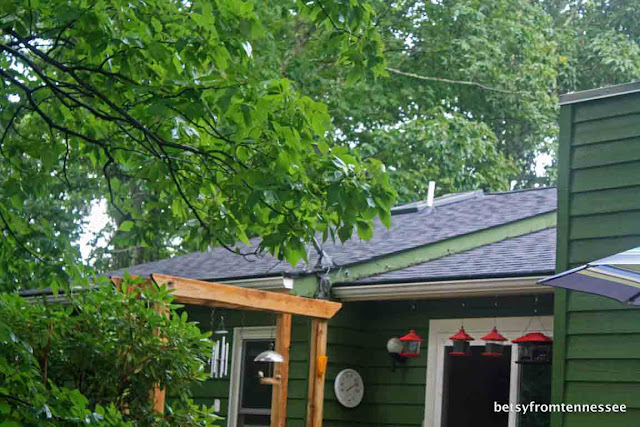 And here is a photo of the completed roof from the back of the house.  You can see the other skylight in this photo.  Both skylights are in each of two bathrooms. 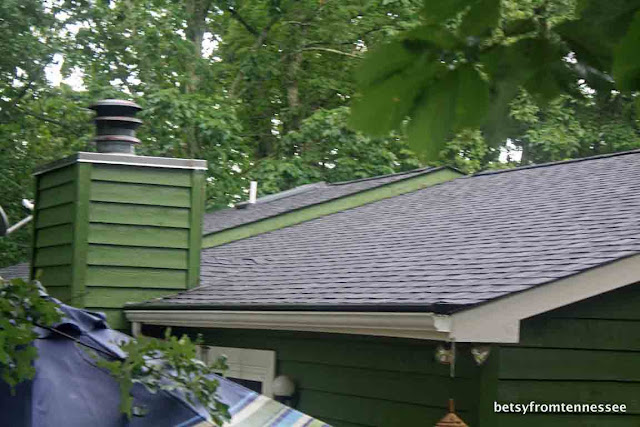 This one was taken from the backyard --on the upper side.  You can see the top of one of our umbrellas on the deck. 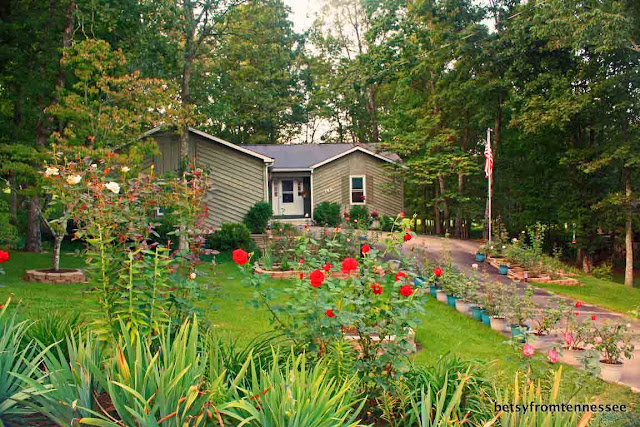 NOW---here is a "BEFORE" photo of our home taken last summer (before the paint job and before the new roof).... You'll note that they had already taken the shutters down and were getting ready to paint when this photo was taken.   You can barely see the old skylight up there!!!! 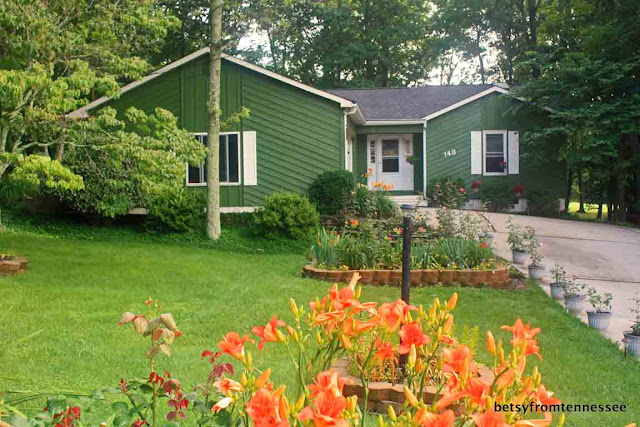 Hope you have a good weekend...  I will see you on Monday!!!