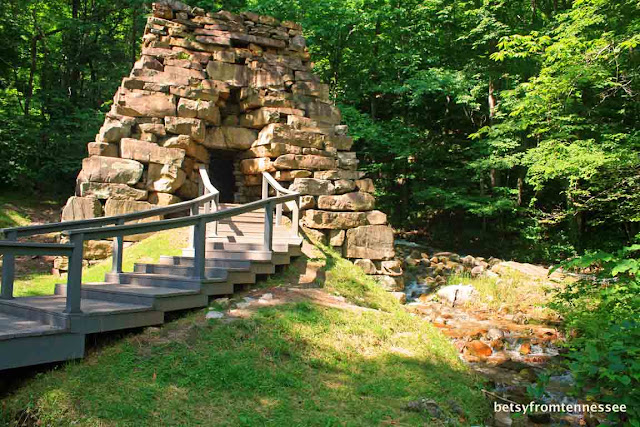 Today,  I'll divide this post into two parts... These are two interesting hikes that George and I took when we were at Pine Mountain State Resort Park  in Kentucky on June  19 and 20, 2013 (on our Anniversary Trip).

The first hike was on June 19 to visit the IRON FURNACE in Cumberland Gap,  Tennessee.   We had seen the Iron Furnace before --but this time,  we wanted to see  Gap Creek as it flowed loudly down the mountain... (Click HERE to see Gap Creek when we hiked on another trail higher up in the mountain.)

In 1819,  a 30-foot high blast furnace was built at  Newlee Iron Furnace to produce IRON which was shipped down the Powell River to factories in Chattanooga.  To produce one ton of iron,  the furnace required an exact recipe of 200 bushels of charcoal,  2 tons of iron ore,  and 500 pounds of limestone---all of which would be lit and joined inside the furnace.  The daily product produced here was 3.25 tons at a cost of $19.40 per ton in 1877 figures!!!!

Only remains are left of the Iron Furnace,  which was in operation from about 1820 until 1880 (except during the Civil War years).   The photo above is of the remains of the Iron Furnace.  The furnace was built of sandstone with a liner of firebrick. (Click on all of the photos for enlargements.) 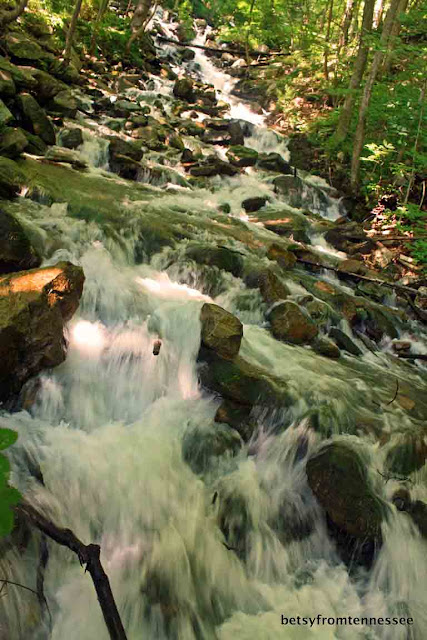 This  is Gap Creek ---flowing down that mountain... 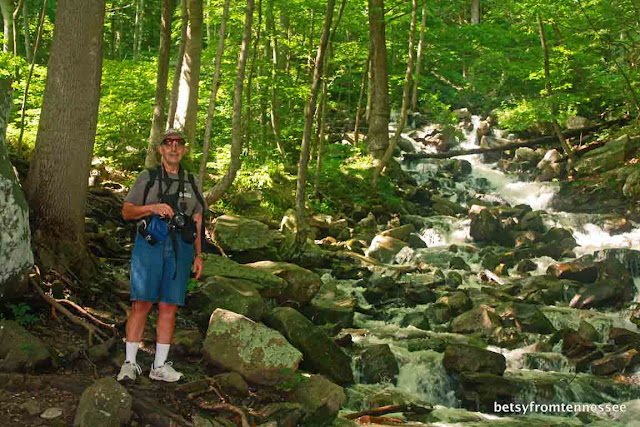 I took this picture of George while we were admiring Gap Creek... 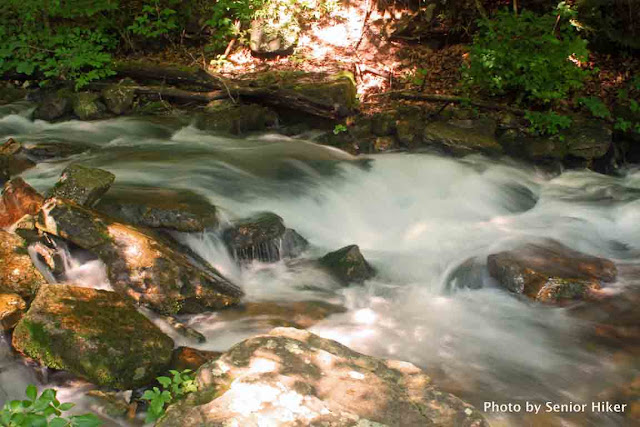 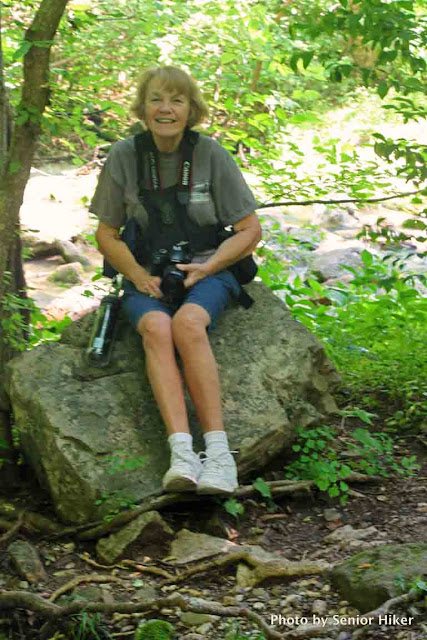 While George took his special pictures,  I sat and enjoyed hearing the roaring cascade as it flowed down the mountain. 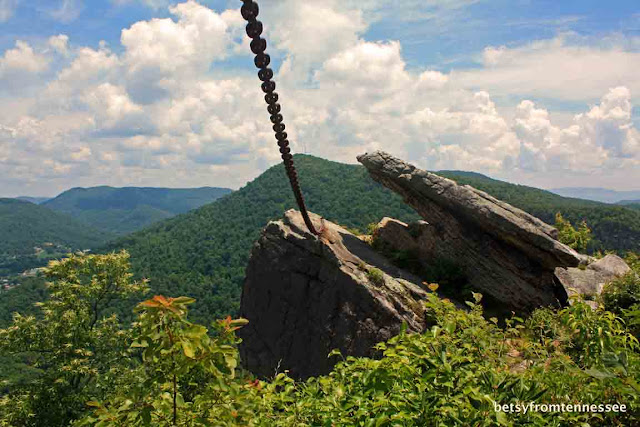 The second hike we took was to CHAINED ROCK above Pineville,  Kentucky,  on June 20, 2013.  There is a HUGE rock on top of the mountain right ABOVE the little town of Pineville,  Kentucky...  As the legend goes,  the town's children were told that the rock would not come down on them since it had been 'chained'....

In 1932,  a local town committee decided to 'really' chain the rock, and chain it big enough so that people could see the chain from the ground below.  SO--with much difficulty,  a battery of more than 50 men alongside a team of mules  heaved that huge chain up the mountain...

On June 24, 1933,  the job was accomplished---and they 'secured' the rock... BUT--more significantly,  they made themselves a first-rate tourist attraction.  People came from near and far to see that huge chain and rock.

Today,  the chain (101 feet long and spanning a 75' gap) still hangs over Pineville.   The chain reportedly weighs more than a ton!!!!!  Visitors continually ask the question:  "Is there any danger that the rock 'could' fall on Pineville?"   The answer is NO.  The 'rock' itself is no more than a jutting mass of bedrock that is part and parcel of the rest of the cliff face.   It's not a loose boulder at all... BUT---it's fun to visit here ---and learn about this 'legend'.

Above is a photo of the big rock ---and the chain.... That rock really is on the edge of the mountain looking down into Pineville... 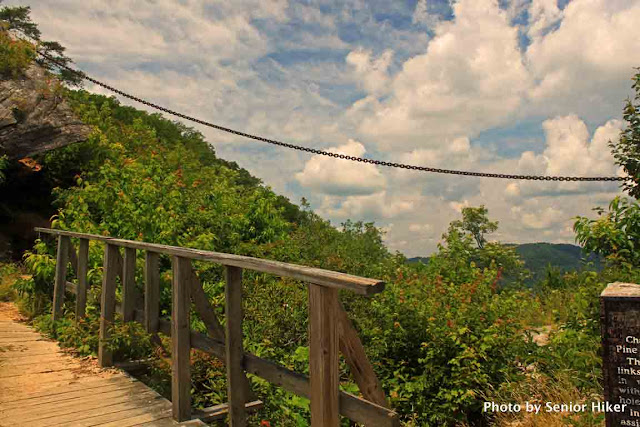 Here's  another photo looking at the chain in the other direction. 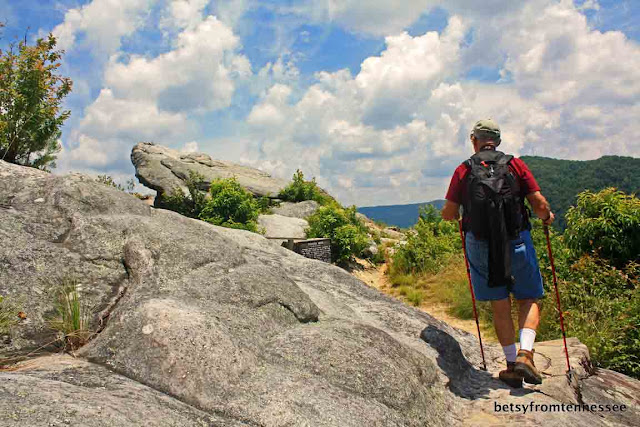 We walked over lots of big rocks to get to Chained Rock.  It was a little tricky in spots--but worth the hike! 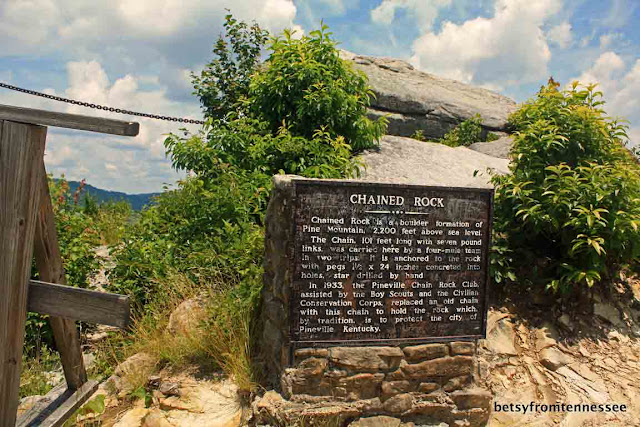 Here is the SIGN posted at Chained Rock.   You'll need to enlarge this one in order to read it. 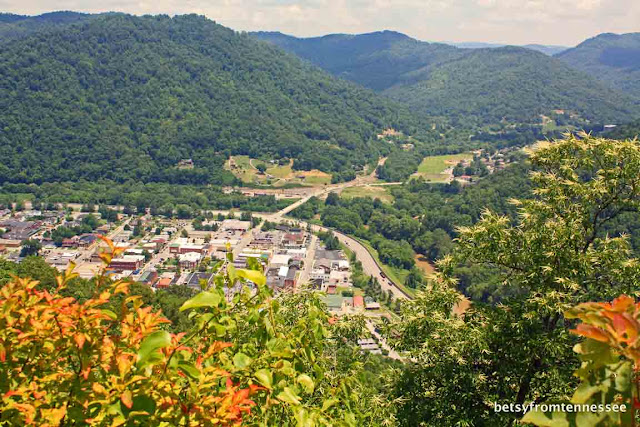 This is a picture from Chained Rock --looking down at the town of Pineville. 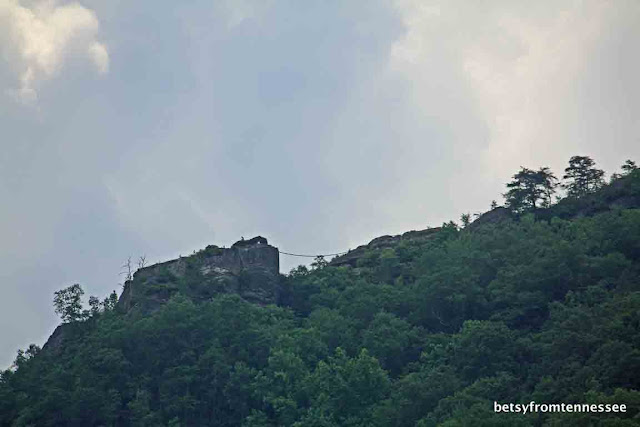 And here is a photo taken the next day (June 21) from downtown Pineville ---looking back up at Chained Rock on that mountain.  This is taken with my long lens. 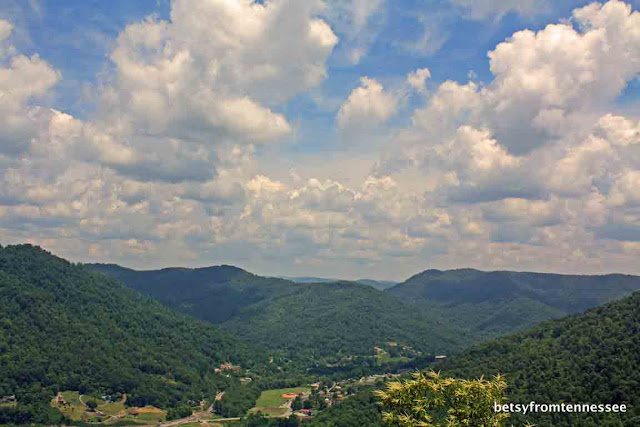 Back up on the mountain,  here is another view of the surrounding area from up there. 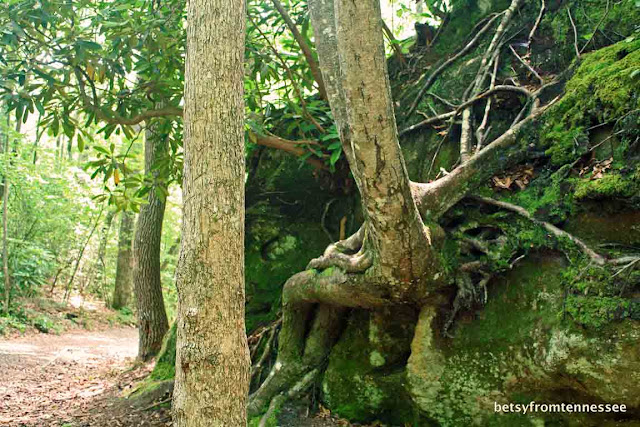 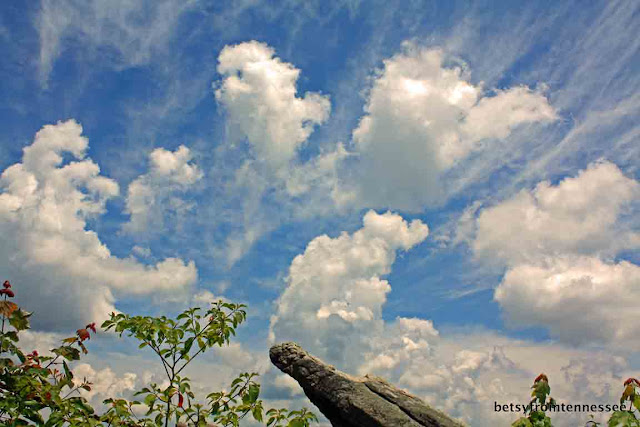 Finally,   here is a neat photo showing the sky and clouds that day.. It was a terrific day to be out hiking!!!!

Hope you enjoyed going hiking with us today!!!!!  Both the Iron Furnace and Chained Rock were interesting places to visit... Isn't it amazing how many terrific places one can see when getting out in the world!!!!

Hope you have a wonderful weekend.  See you Monday.