On our recent trip to Texas,   we visited my oldest son,  Bert (goes by Tre now) and his busy family who live on the west end of Galveston Island...  I will have at least one more post showing you more from Galveston.  Today's post will be a tour of the island. 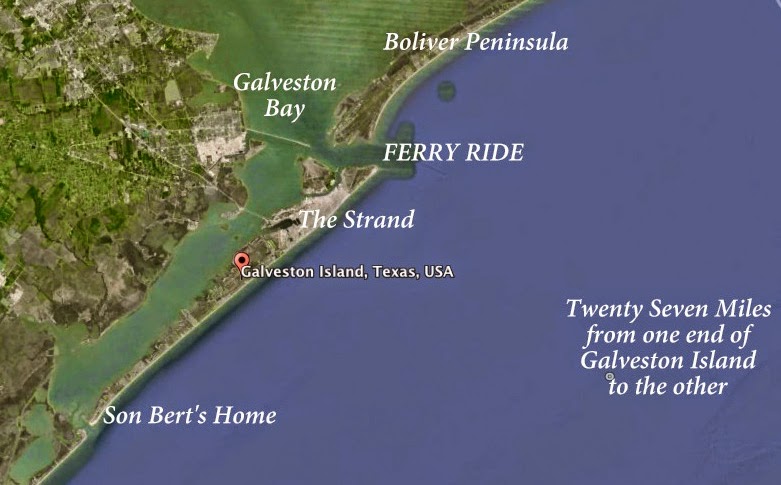 Galveston, Texas is south of Houston and is truly an island with Galveston Bay on one side and the Gulf of Mexico on the other side.  I have marked this map so that you can get an idea of the way Galveston is laid out.  The island is 27 miles from one end to the other --and in some places --it's only about 3 miles wide.

Bert and family have their own vacation rental business (bestofthewestgalveston) in that area..  They have about 15 rental properties (part of Pointe West Resort) --so as you can imagine,  they stay very busy.  They rent condos/houses on both the bay side of the island and the beach side.  What a beautiful area down there.  If you ever want info on any of their properties,  contact Bert (Tre Wilhite) at the link above.

Today's tour will begin on the west end --where Bert lives and works.  Then we'll head east to Galveston and tour the "Strand" area  (downtown with lots of shops and restaurants).  After that we  will head to the east end of the island and take the ferry across to the Bolivar Peninsula.  (You can see these areas on the map I provided.) 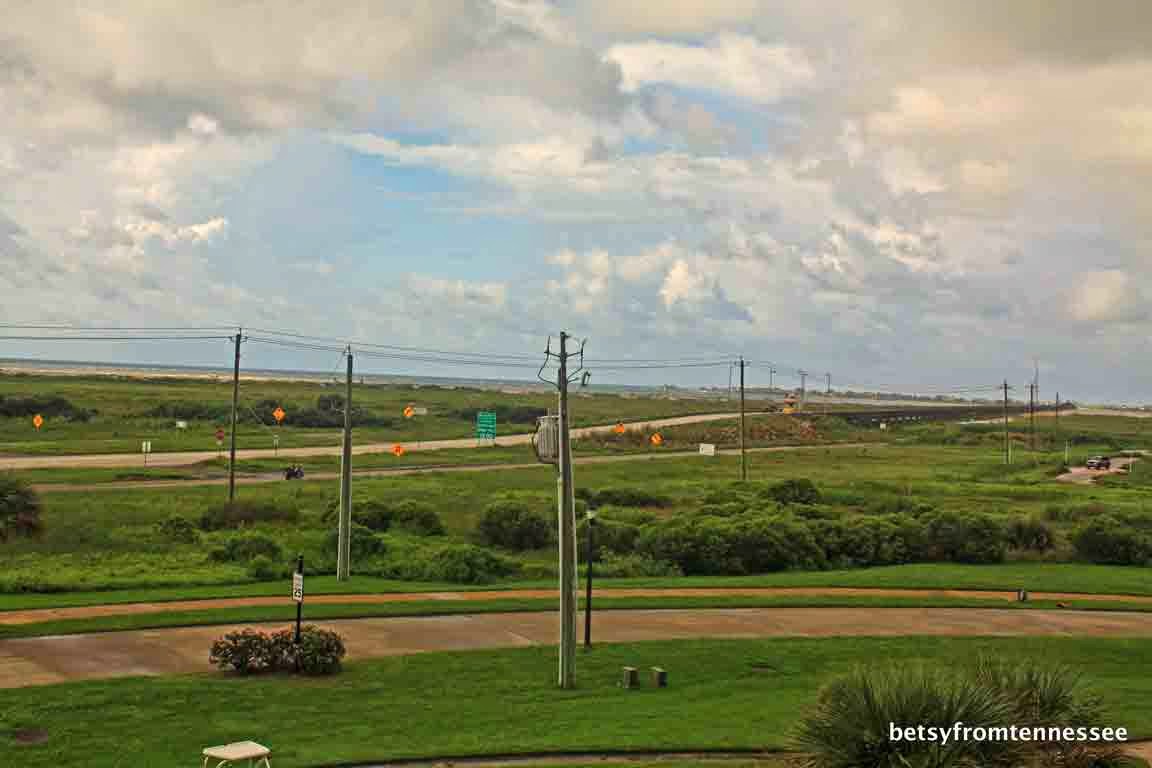 Looking out from the front of Bert's condo,  you can see that he is at the end of the island.  From this angle,  the bay is behind me (out of sight)  and the Gulf of Mexico is what you can see in the distance.    This area is called the San Louis Pass ---and if you pay the toll,  you can go across a bridge and the road goes south to Freeport and to Lake Jackson.   This area is truly a BIRDER'S Paradise... Bert has gotten very interested in all of the different birds --and we got to see some of these birds while there.  That will be another blog post. 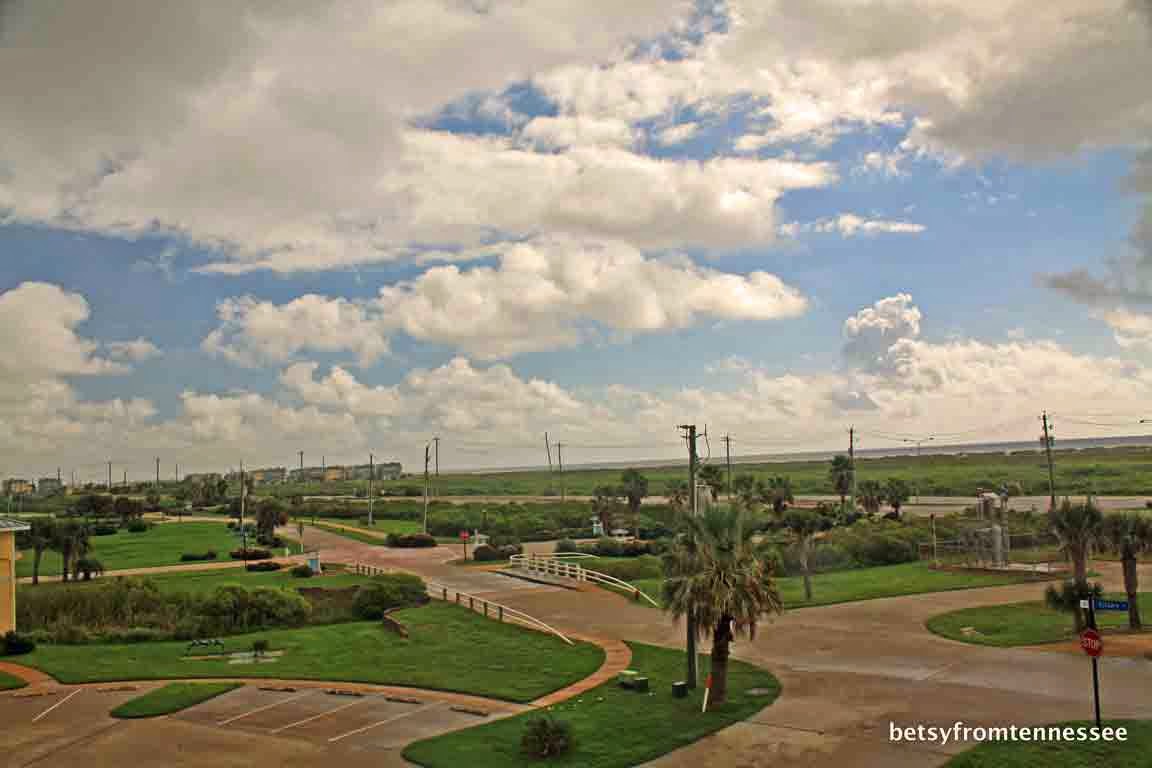 This was also taken from the front of Bert's condo --looking east.  Some of the units you can see in the distance are Bert's rental properties ---which are on the beach. 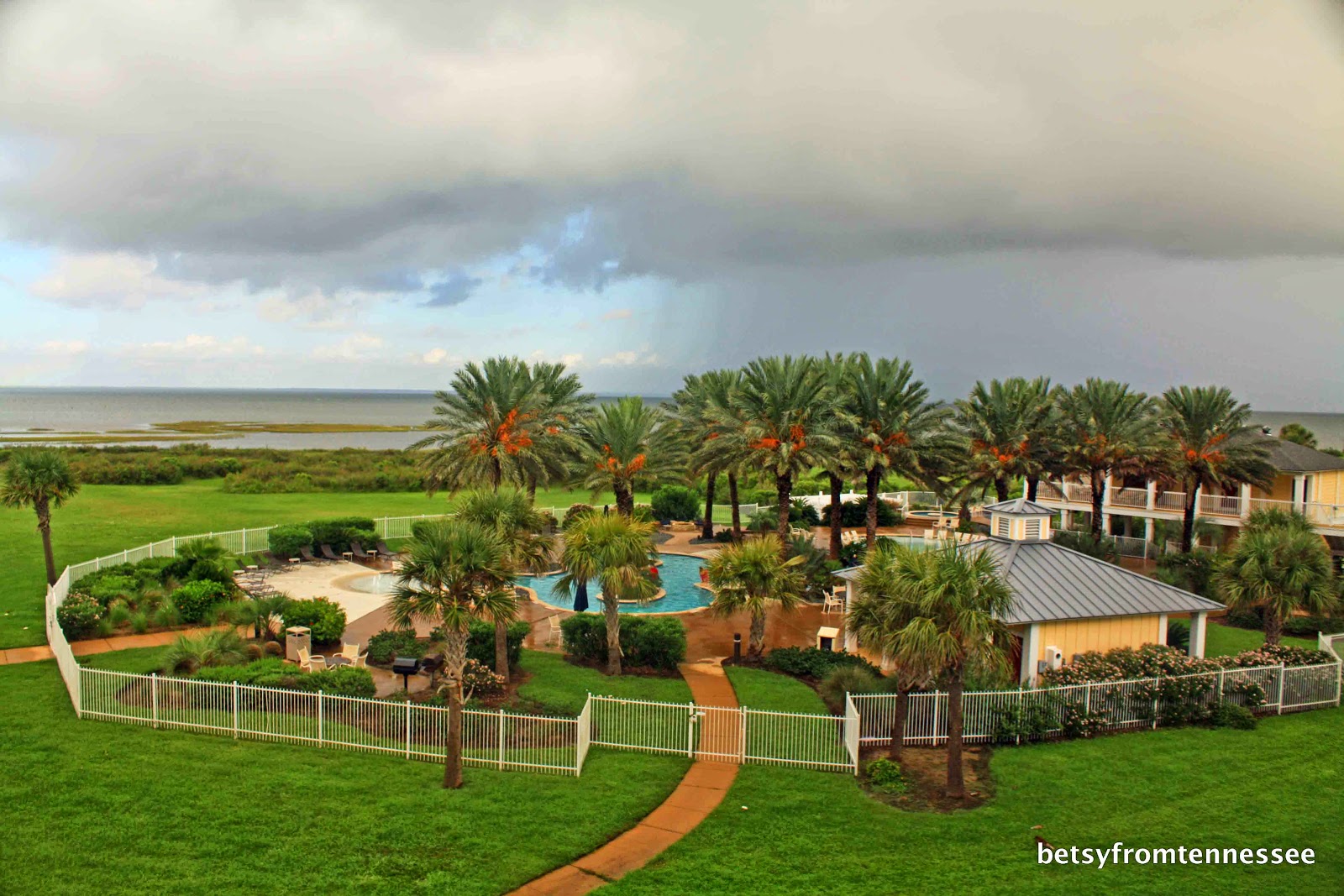 NOW--I'm on the other side of Bert's condo --looking out toward Galveston Bay..  I love the pool area of this huge complex (Pointe West Resort).   See the rain in the background over the bay?  There was rain all around the area --but it turned out to be a gorgeous day. 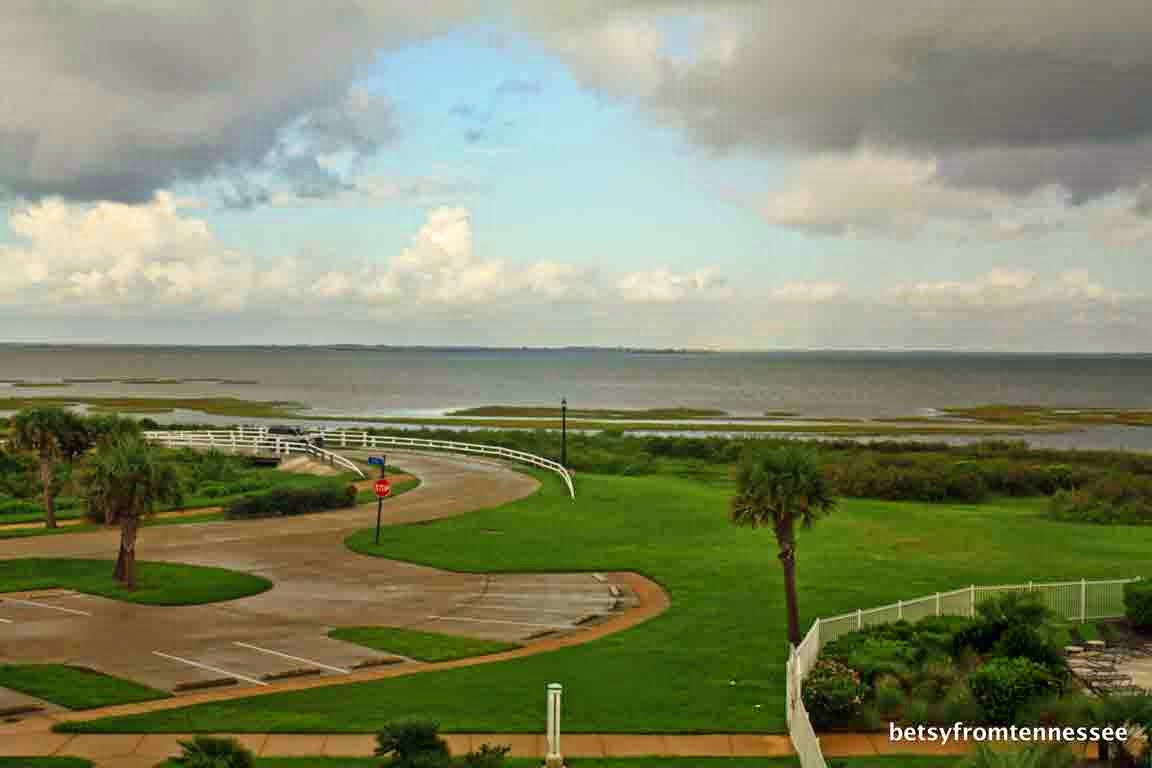 Here's one more photo from the back of Bert's condo ---looking toward Galveston Bay.  You have to SEE this area in person ---if you want to be somewhere where you feel  as if you are truly in another world---away from everything...   SO gorgeous! 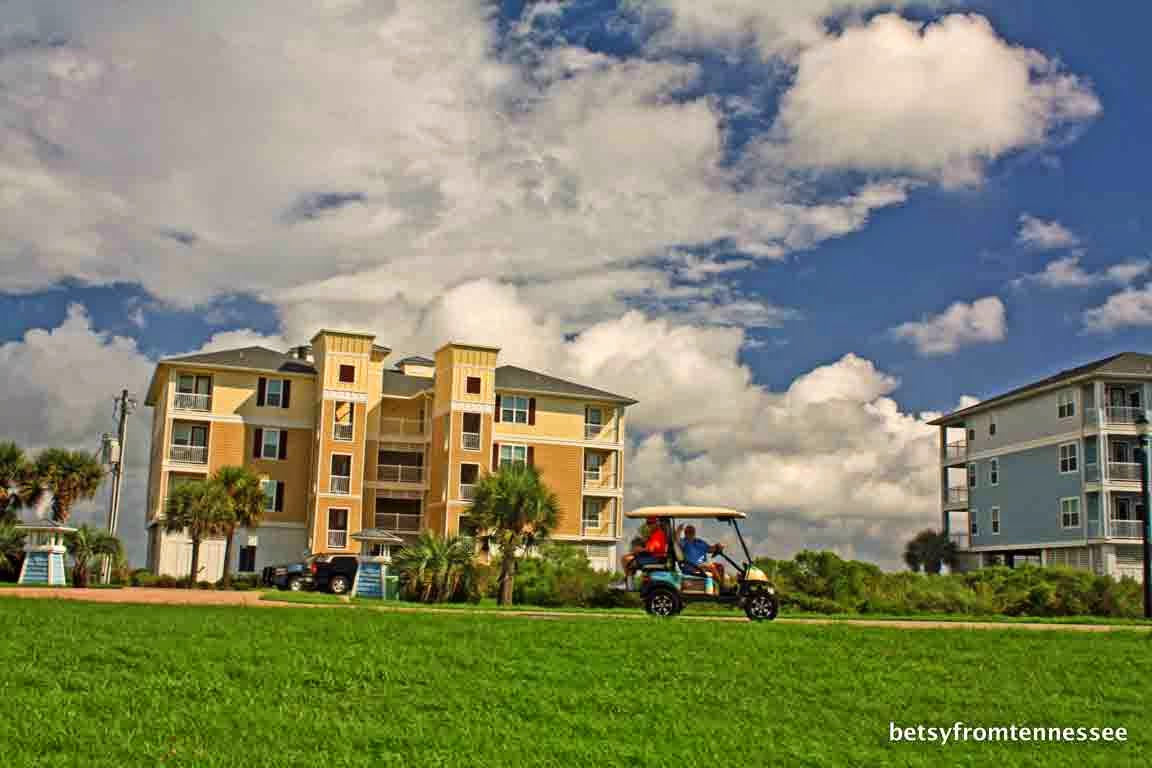 Next,  after leaving Bert's condo,  he took us on his golf cart around the entire facility showing us some of the properties that they rent.  This is a fantastic area --as long as the hurricanes stay AWAY.    Six years ago,  Hurricane Ike hit Texas ---and did alot of damage to the Galveston area (especially the east side).   That is when Bert and family moved to Las Vegas for a year while Galveston 'cleaned itself up' after the big storm, and things started over.  NOW---Galveston is booming ---and I was impressed at how well the community has bounced back. 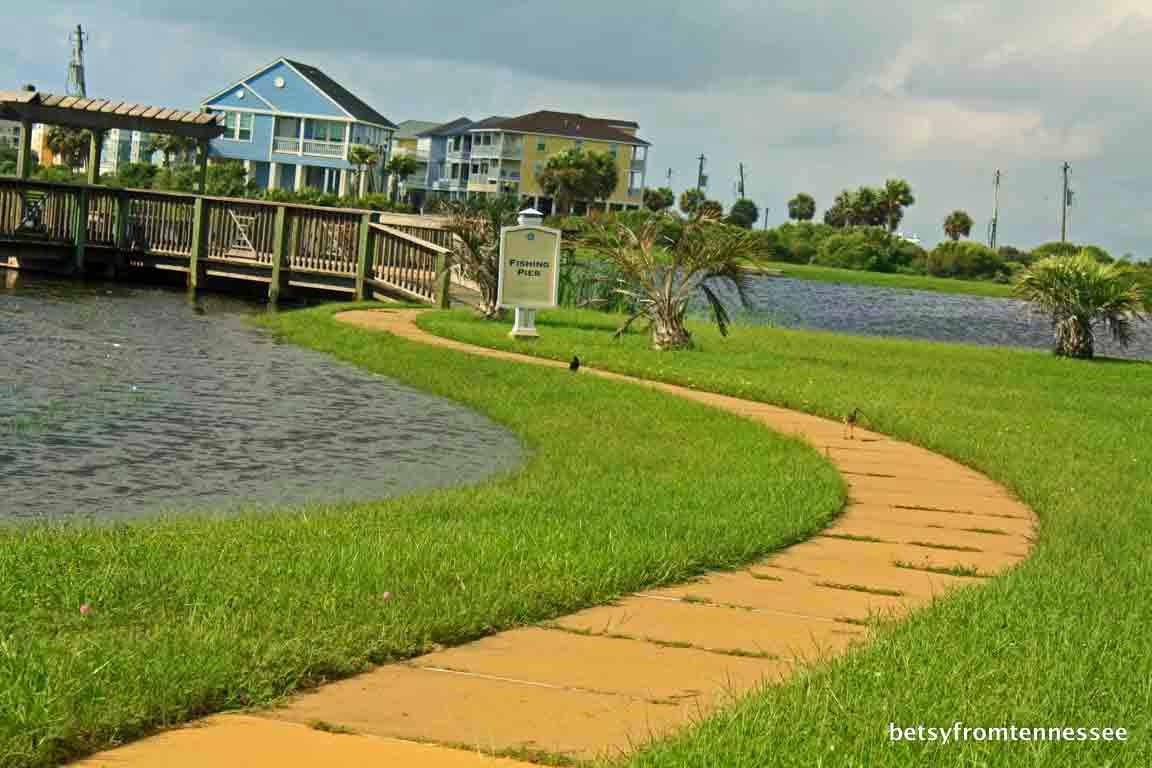 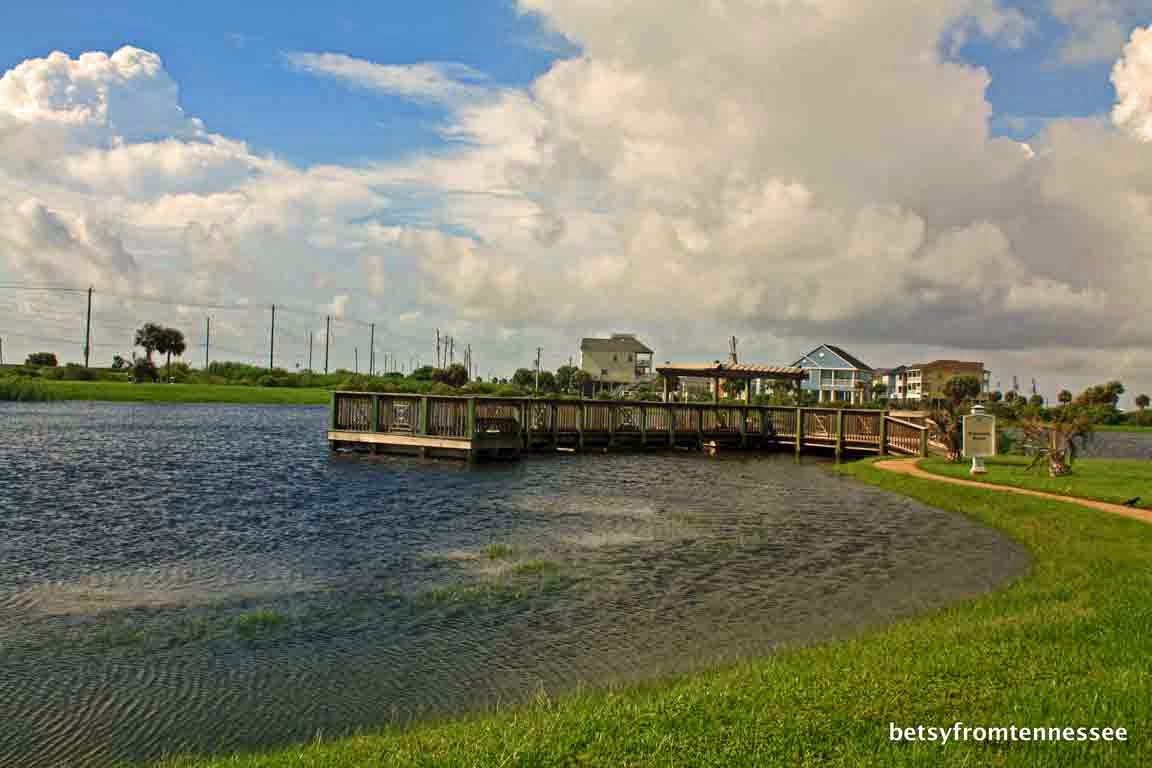 One more photo of this amazing area!!!! 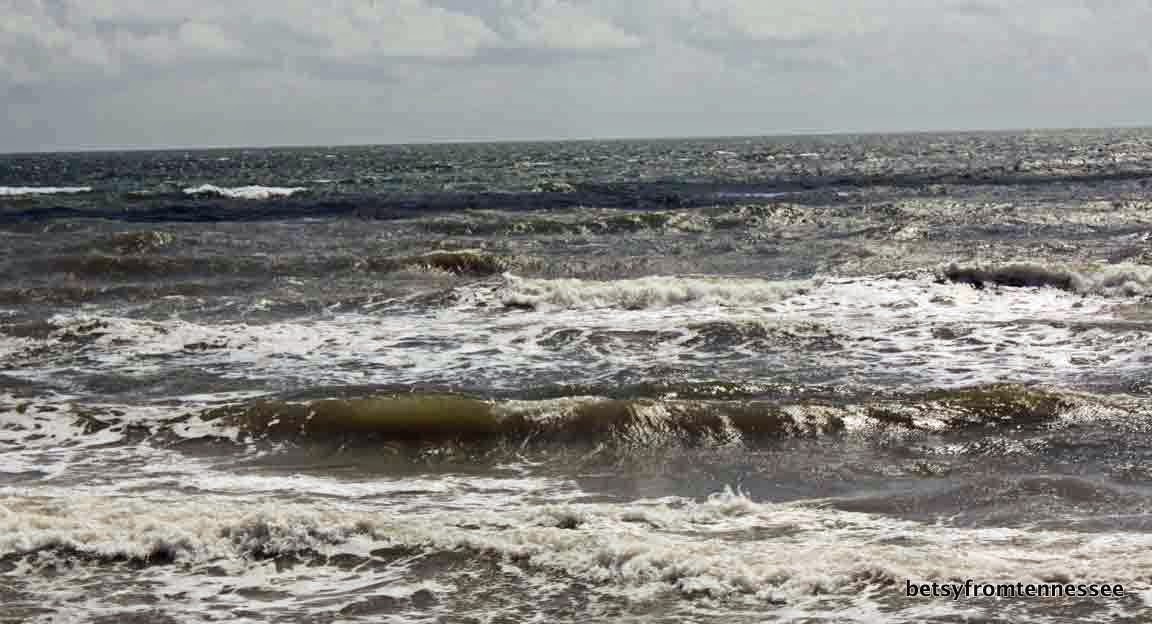 Next,  after leaving the west end of the island,  we headed toward the town of Galveston.  Galveston had another horrible hurricane in 1900 --where over 6000 people died... If you want to read more about that horrible storm,  click HERE.     Here is a picture of the Gulf of Mexico in Galveston --taken on 9/20/14.  The sea was rough on this day ---which I'm sure made surfers happy!!!! 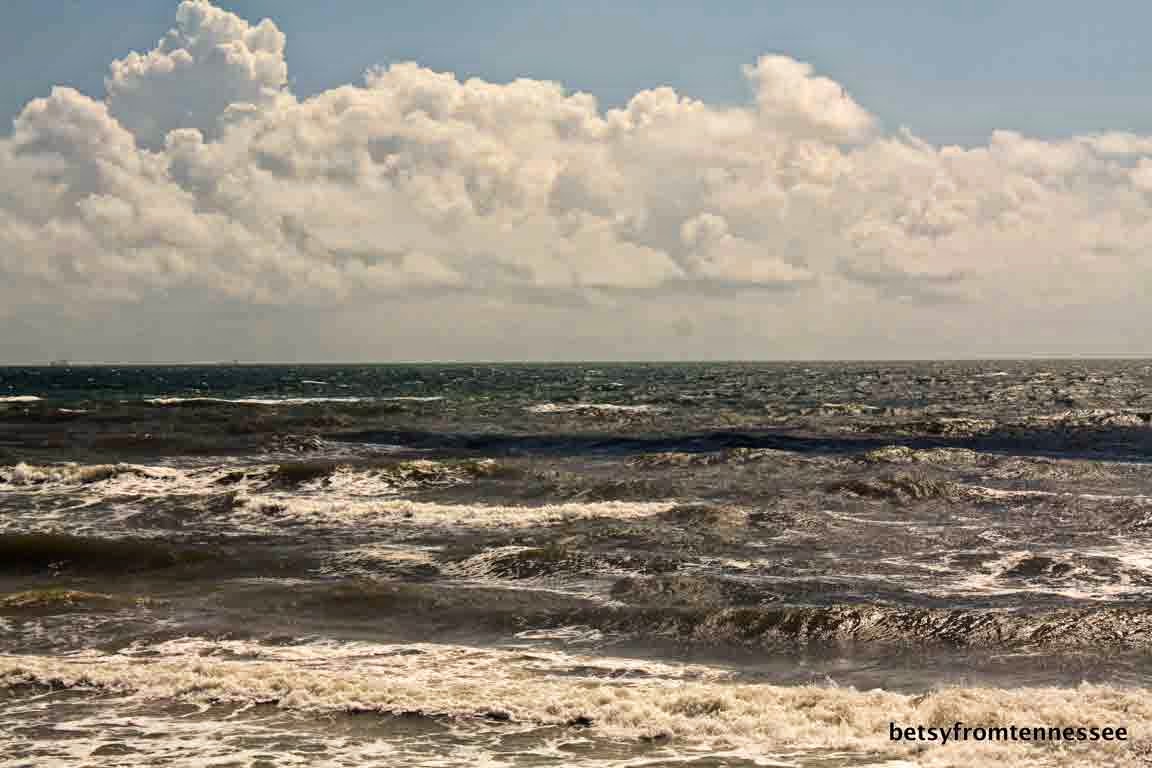 Here's  one more picture of the ocean taken that day.   After that horrible storm in 1900,  Galveston built a 10-mile-long seawall --which was completed in 1904 to help protect the city from future storms.  The seawall 'helped' during Hurricane Ike in 2008,  but there was still quite a bit of damage to the entire city/area.    I took both this picture and the previous one from the seawall. 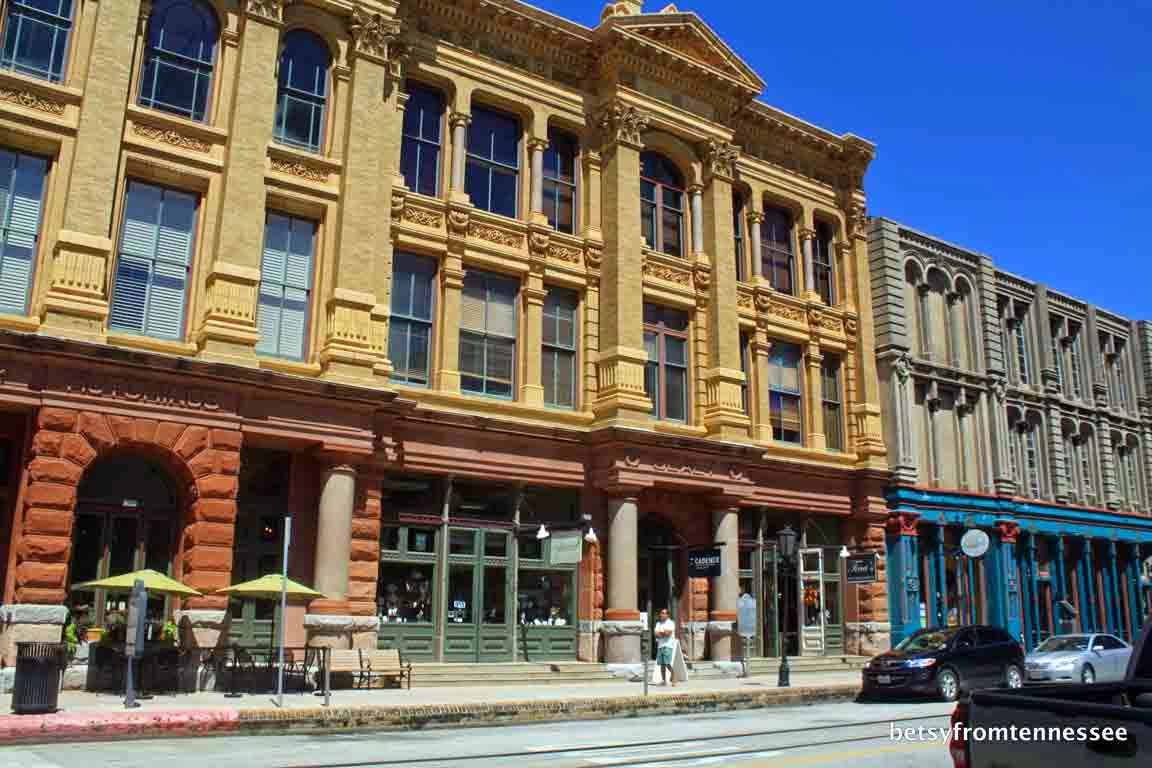 From the seawall, we next visited the STRAND  (touristy area filled with shops, restaurants, etc.),  There is so much HISTORY in this area --and one could spend an entire day just walking the streets while checking out the shops and history.  I love the old buildings (photo above)--and since the 2008 storm,  Galveston has done so much to clean up the area and make it what it is today.  By the way,  there was about 12 feet of water in this area after the storm --so they did have LOTS of damage. 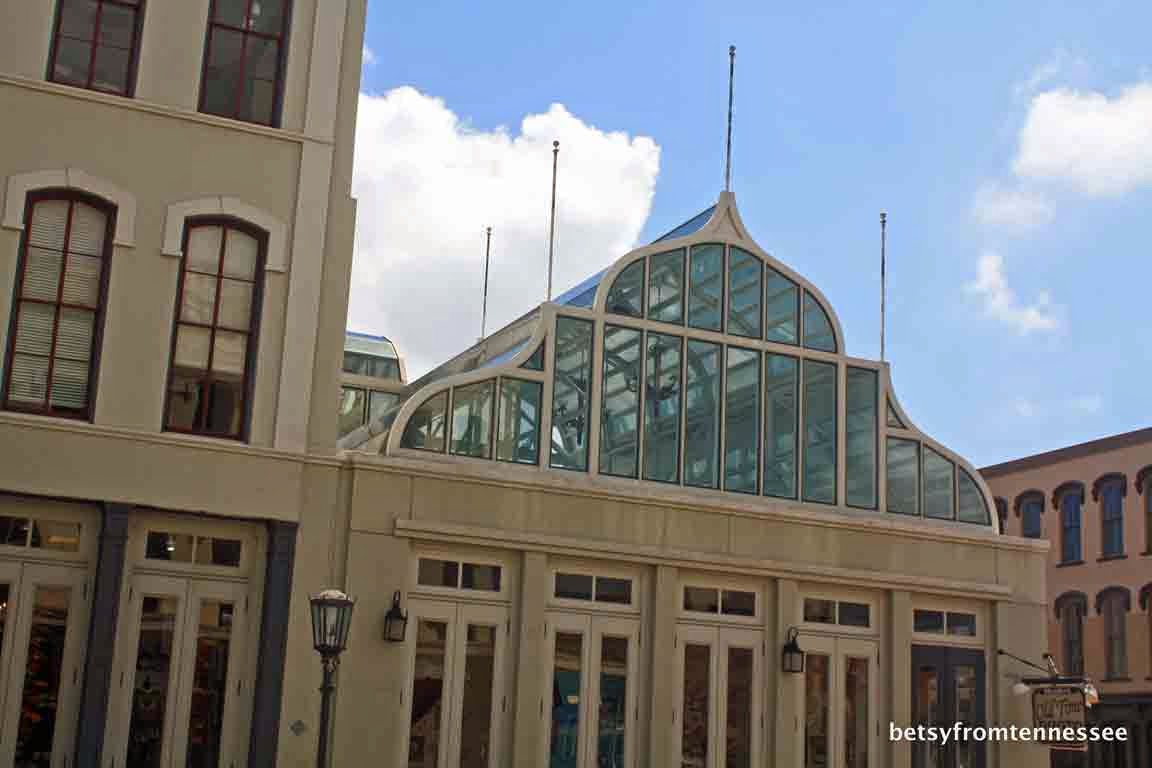 Most of the STRAND area is composed of older buildings built many years ago.. But I was interested in this modern 'top' located on a building in the midst of the Strand area.  Neat, huh----although I still like the older buildings better. 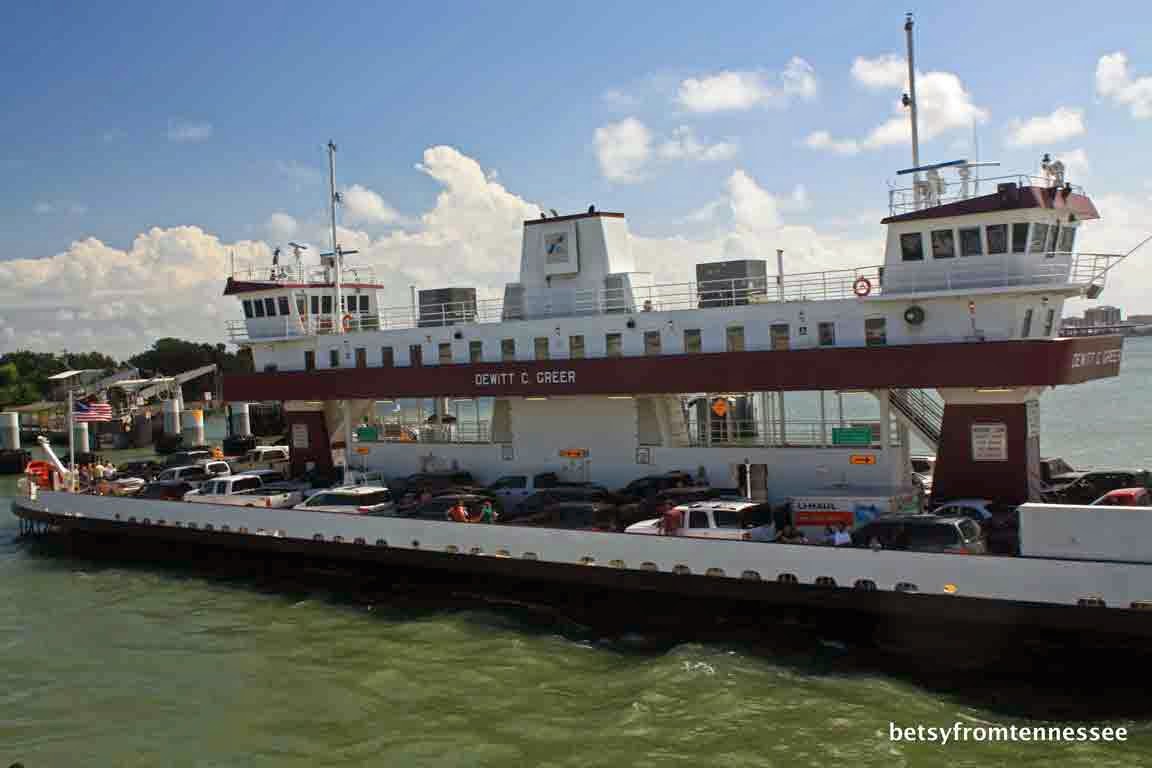 After spending some time in the Strand (and having lunch there),  we then checked out the east end of the island.  After that we took a ride on one of the FIVE ferries (photo above of one of them) across Galveston Bay toward the Bolivar Peninsula.  (Note of interest:  there is NO bridge from Galveston to Crystal Beach --which is on the Bolivar Peninsula. SO--many people count on these ferries to get back and forth.   IF you want to read more about these Galveston Ferries,  click HERE.) 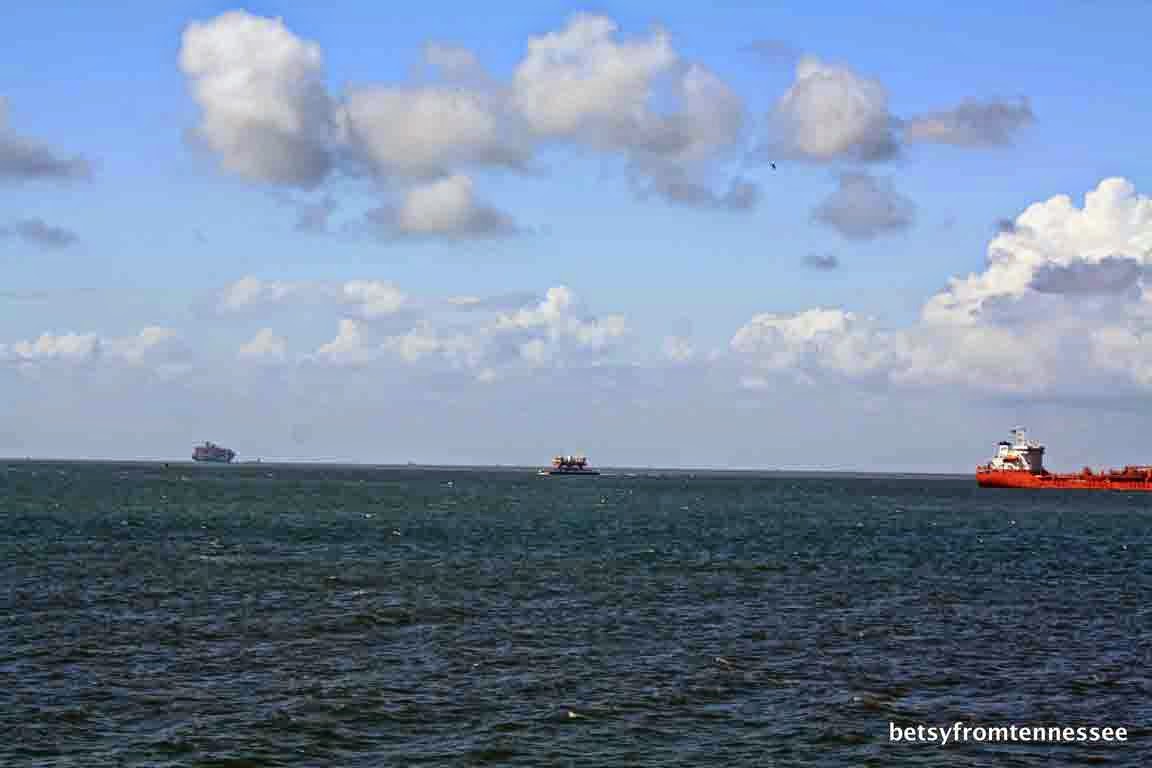 Galveston Bay is gorgeous --and we even saw dolphins (another blog post) in the water.  This is part of the Houston Ship Channel --so we saw many large ships while going across the bay.  The trip across the ferry is 2.7 miles and takes about 18 minutes. I read where about 7000 ships pass this way each year going to and from Houston.  IF you ever get to Galveston,  take this FREE ferry ride back and forth.. SO MUCH FUN!!! 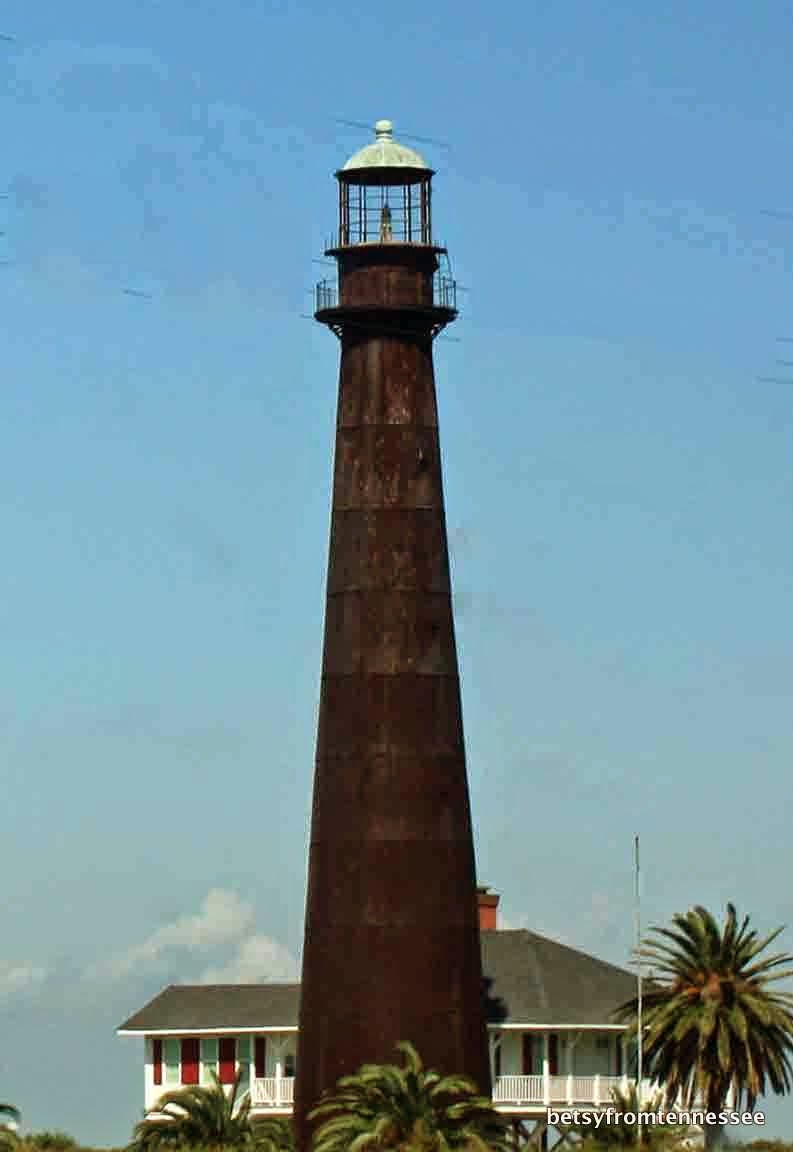 Finally,  here's one last picture taken from the Bolivar Peninsula.  This area experienced more damage in 2008 from that storm than any other area, but the lighthouse made it through the storm.  Entire communities on this side of the bay were totally wiped out.   We drove just a little ways --and I snapped this photo of the Port Bolivar Lighthouse,  built in 1872.  It was retired in 1933.  In 1968,  a movie, "My Sweet Charlie",  with Patty Duke and Al Freeman Jr. was filmed here.  For more info about this lighthouse,  click HERE.

Well---after turning around and taking the ferry back to Galveston,  we headed back to the west end --and then back to Kemah for dinner with more friends... That was our day ---and our tour of Galveston.   Hope you enjoyed it.   As I said,  there will be one more post from this area sometime --but I wanted to give you the tour first.

Have a great week and enjoy NATURE---if your weather permits!!!!! ha... We've had rain-rain-rain recently --but I'm not complaining since we needed it so much!!!!!