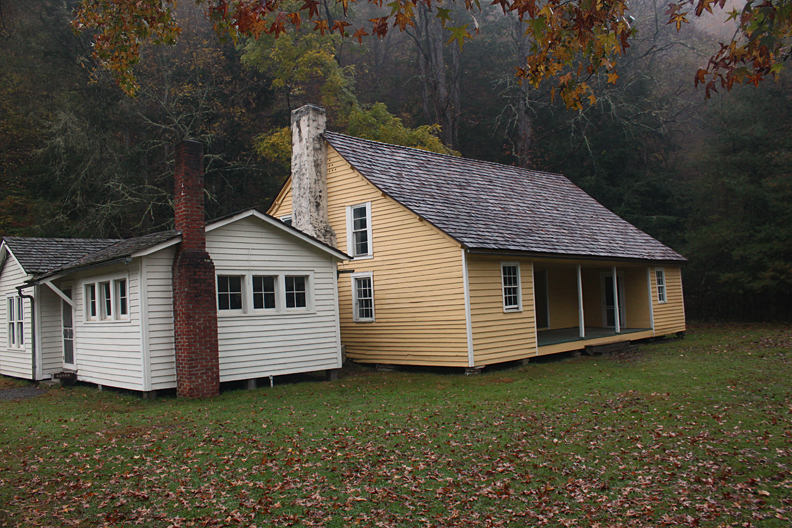 Please don't miss seeing any of my posts from Cataloochee Valley.   Click HERE  to see any or all six posts.   Above is the Palmer House.  George Palmer brought his family to Cataloochee Valley about 1848--after losing quite a bit of money due to some bad decisions and poor judgment.  Apparently George learned his lesson --since he and his family became one of the most prosperous families in Cataloochee.   George died in 1859,  the victim of a heart attack while cutting a fallen tree out of the road.

Both brothers were informed bankers,  lending money at interest and securing it with livestock and land.  They were also public-spirited,  each serving as land assessor,  justice of the peace,  election judge,  road trustee and church official.

The home pictured above belonged to Uncle Fate.  When he died in 1910,  his son Jarvis inherited the place.   Jarvis was an early entrepreneur in the tourism business.  His family owned land and controlled the fishing rights along almost three miles of Cataloochee Creek.  They stocked the stream and charged 50 cents a day to fish. 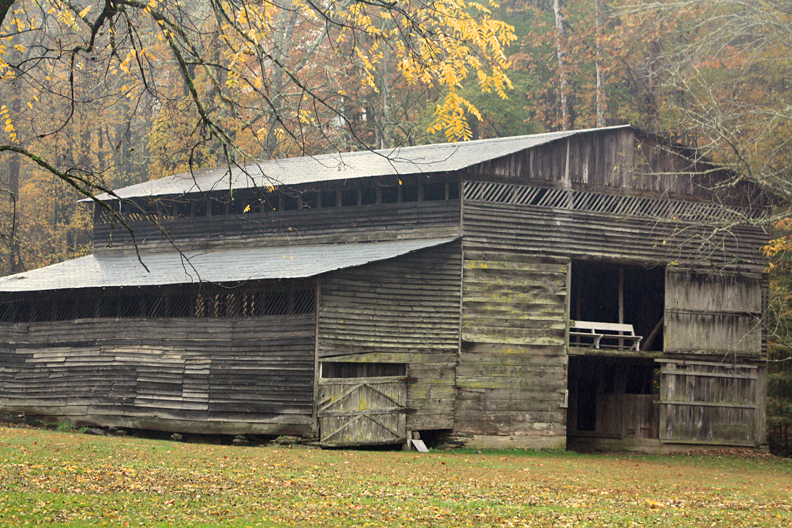 This is the Palmer's Barn.   The Palmers built a couple of bunkhouses next to the barn (which are no longer there) for the fishermen.  They charged 50 cents a day to stay in one of the bunkhouses,  an additional 50 cents for meals,  in addition to the 50 cents they paid to fish...  To accommodate the diners,  Palmer added a two-room kitchen and dining wing on to the south end of the house in about 1924.. (That is the white part of the house in the photo above this one.)  When the park was established,  the Palmers moved out and a ranger moved into their home. 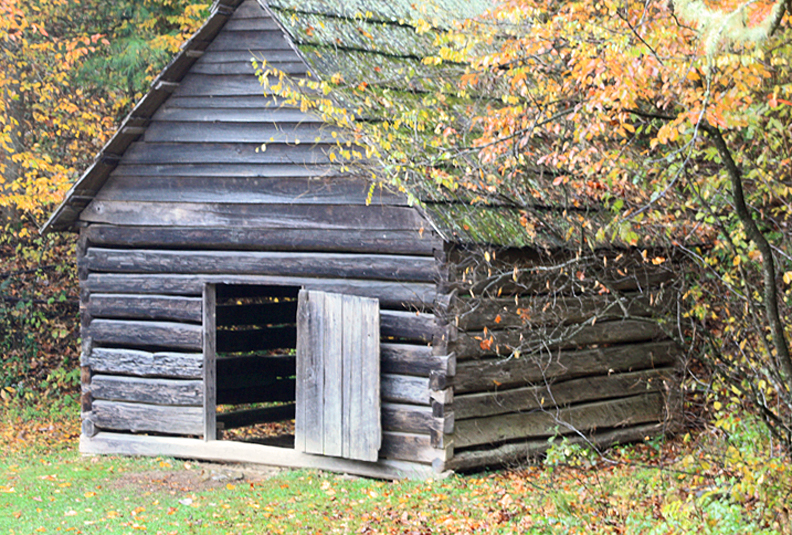 This building behind the Palmer House was the blacksmith shop. 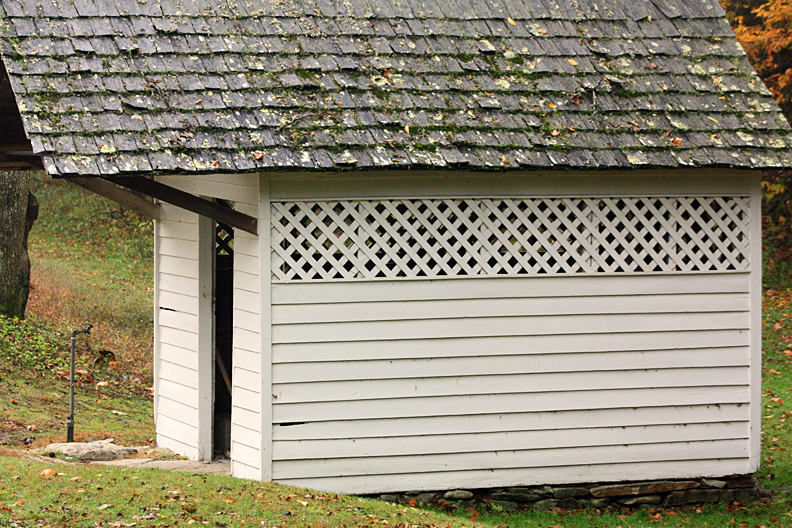 And this building (also behind the Palmer House) was the springhouse.   Other outbuildings which are no longer there were a canhouse and smokehouse.  (Anyone know what a 'canhouse' was????   I tried to google it--but got nowhere.) 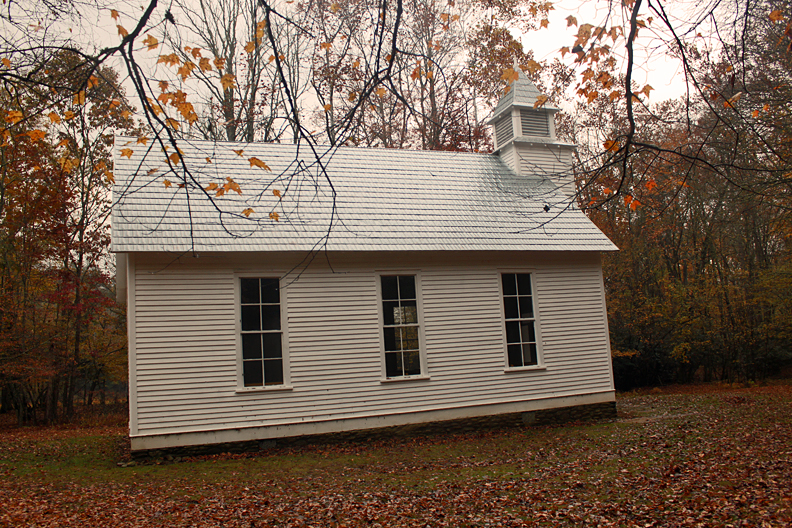 My header at the top of the page is a picture of the Palmer Chapel.   Here is the same chapel from another angle.  Land for this Methodist Church was deeded by Mary Ann Palmer in 1898,  and the building went up in the same year.  Most of the preachers were 'circuit riders' ---who visited about one Sunday a month.  However,   Sunday School was held every week. 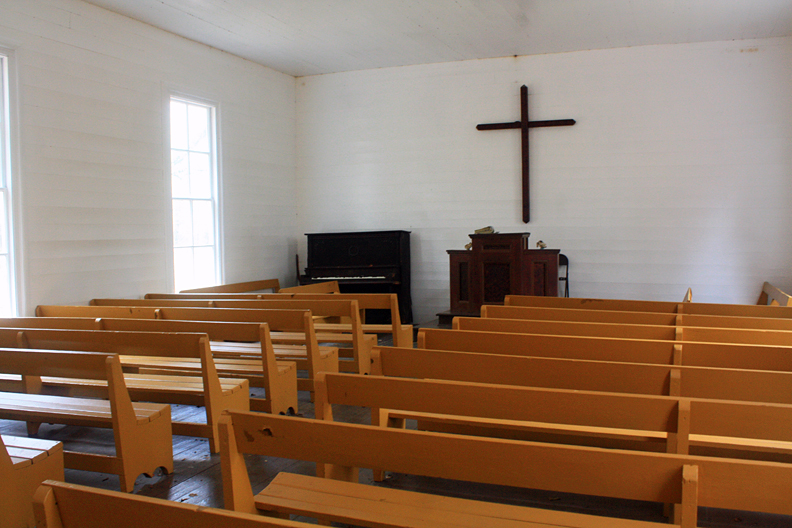 Here is the inside of the Palmer Chapel.  Services consisted of prayers,  singing and sermons.  Revivals held each Fall rekindled the spirits of the faithful,  and brought in new members.  Even today a reunion is held each year at the church.  Friends and families return to clean the cemeteries,  attend services and have dinner on the grounds.  (We did not see a cemetery.) 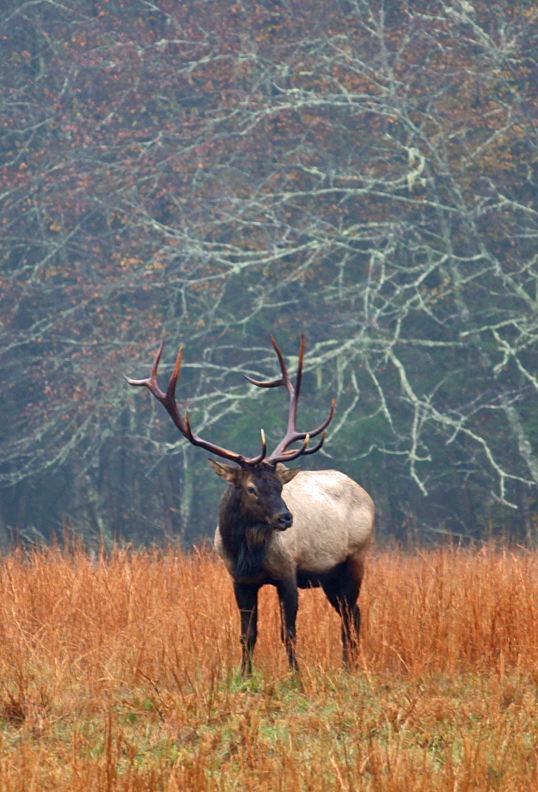 Finally,   here's one last picture of my very favorite thing that we saw in Cataloochee Valley.   The ELK were fabulous---and hearing them bugle was totally awesome.  IF you ever get to Cataloochee,  go in the Fall during rutting season --so that you can hear them bugle.  What a fabulous place!!!!