The Arches in Utah 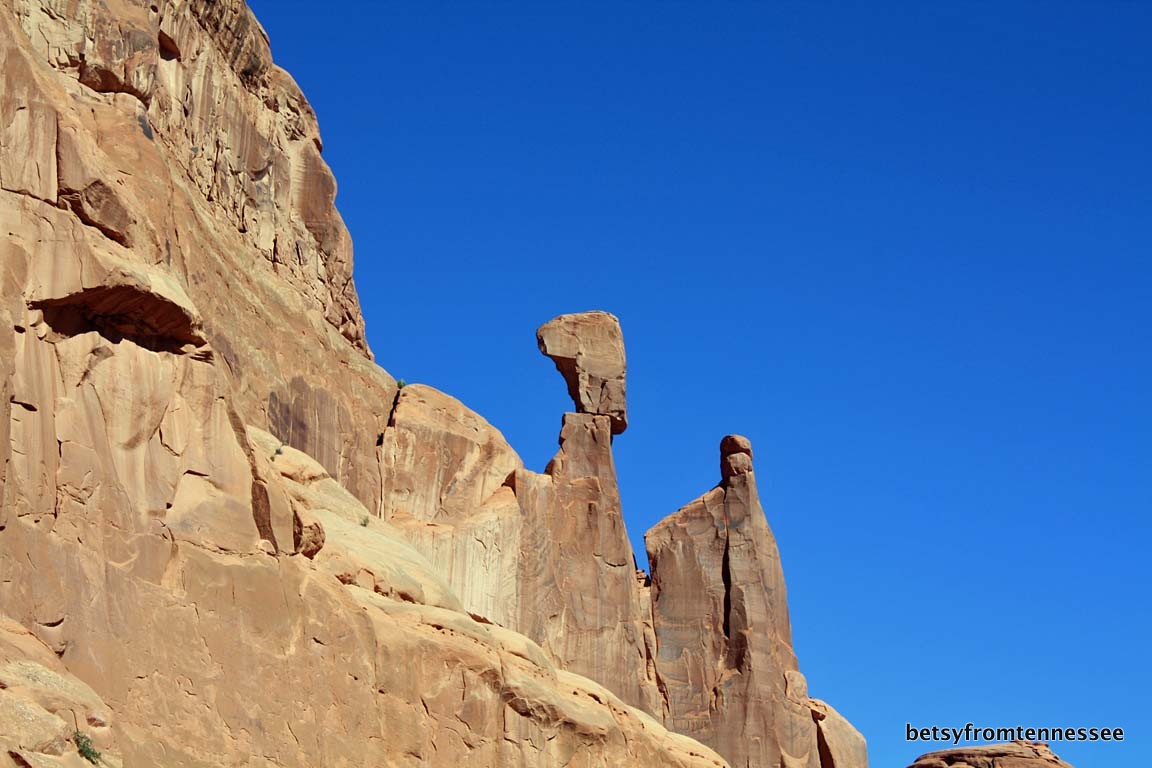 During our three week trip out west in June,   our last stop in Utah (as we headed to the Rocky Mountains) was the ARCHES National Park.  We left home on June 10---and when we got to the Arches,  it was June 23... We were both tired and VERY hot by then...  SO--because of this,  our experience at the Arches was not as good as most other places we visited on this trip. I guess that is why I've waited so long to pull out this set of photos... BUT-- now that I'm looking at the photos,  I really know how pretty it was there...

SO--my advice:  unless you don't mind the 107 degree heat,  don't go there in Summer..  Also--I despise crowds --and there are always tons and tons of people there in the Summer... We will go back ---but not in Summer...

I do have some wonderful photos to show you from the Arches ---so today will be just one group of them... Hope you enjoy them!!!!!  The above picture shows one of the many crazy rocks --just sitting up there...  I still don't think I'd want to stand under that thing though... ha  (Be sure to enlarge photos for bigger shots.) 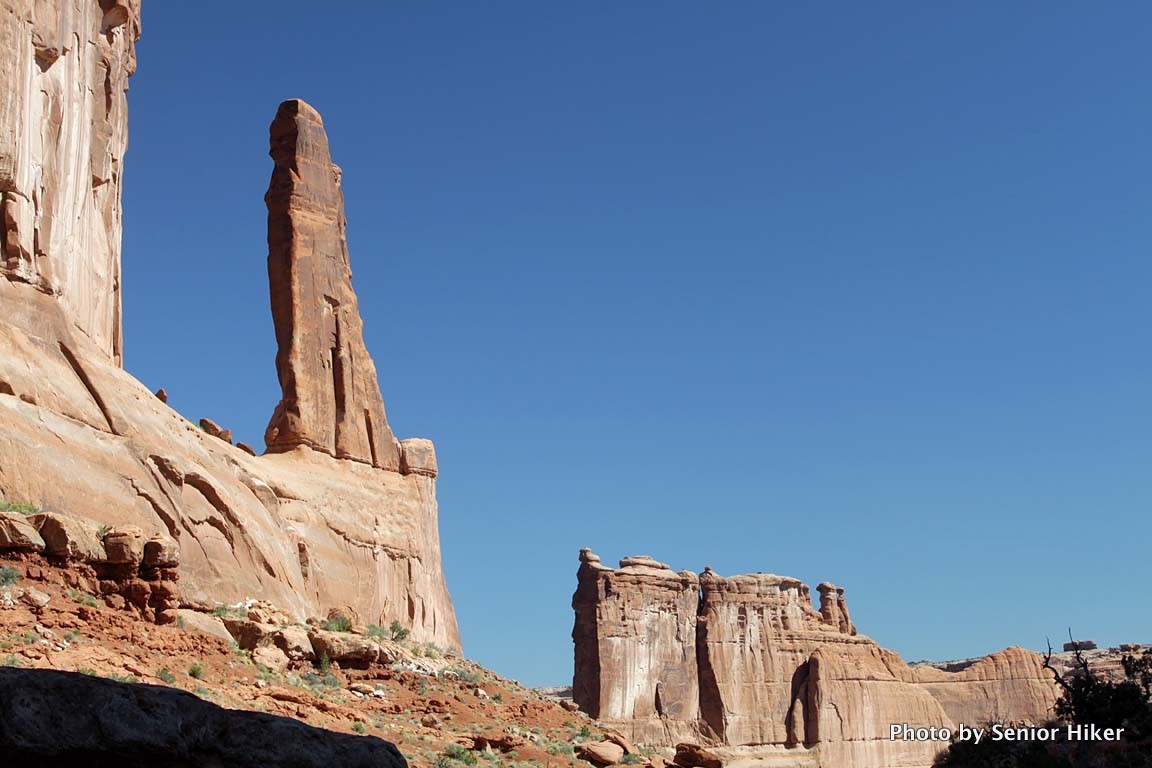 I loved the shape of this tall one---standing there just like a watch tower,  checking out everything!!!!   Water and ice,  extreme temperatures and underground salt movement are responsible for the sculptured rock scenery of the Arches National Park.  It's hard to imagine how the 100 million years of erosion or such violent forces that created this land caused one of the world's greatest densities of natural arches...

The American Indians used this area for thousands of years.  The Archaic peoples, and later ancestral Puebloan,  Fremont, and Ute peoples, searched the arid desert for food animals,  wild plant foods,  and stone for tools and weapons. 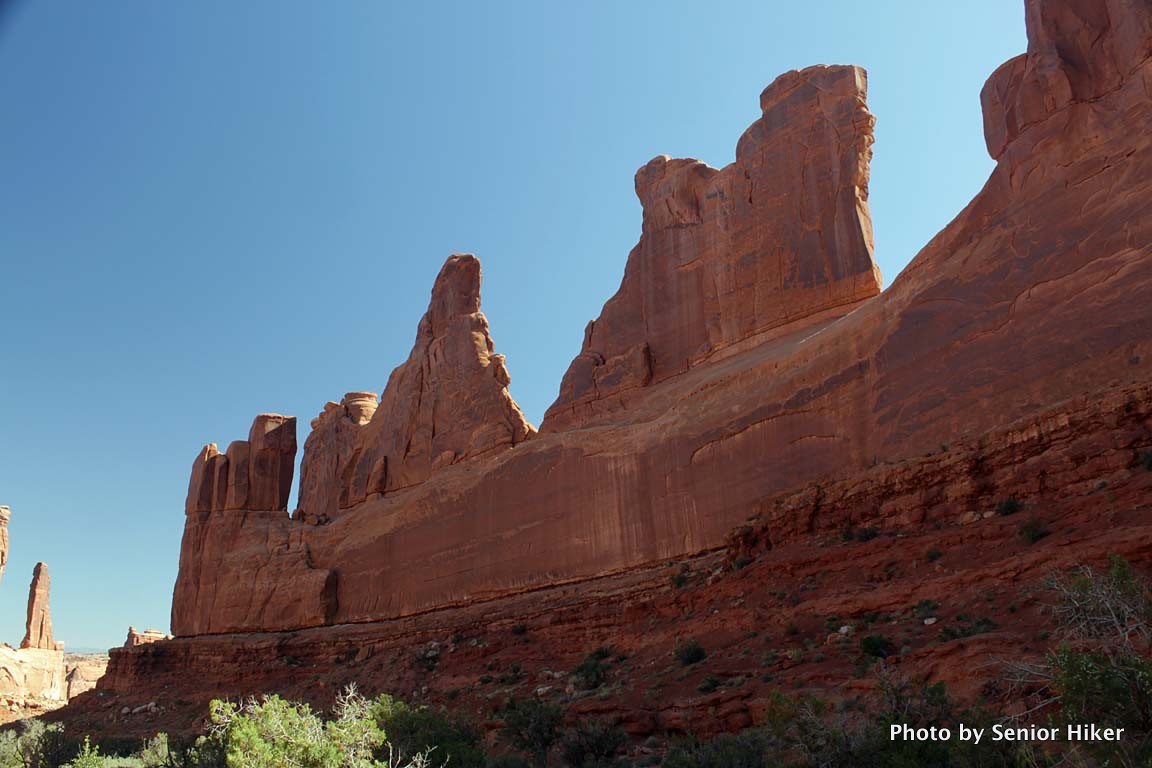 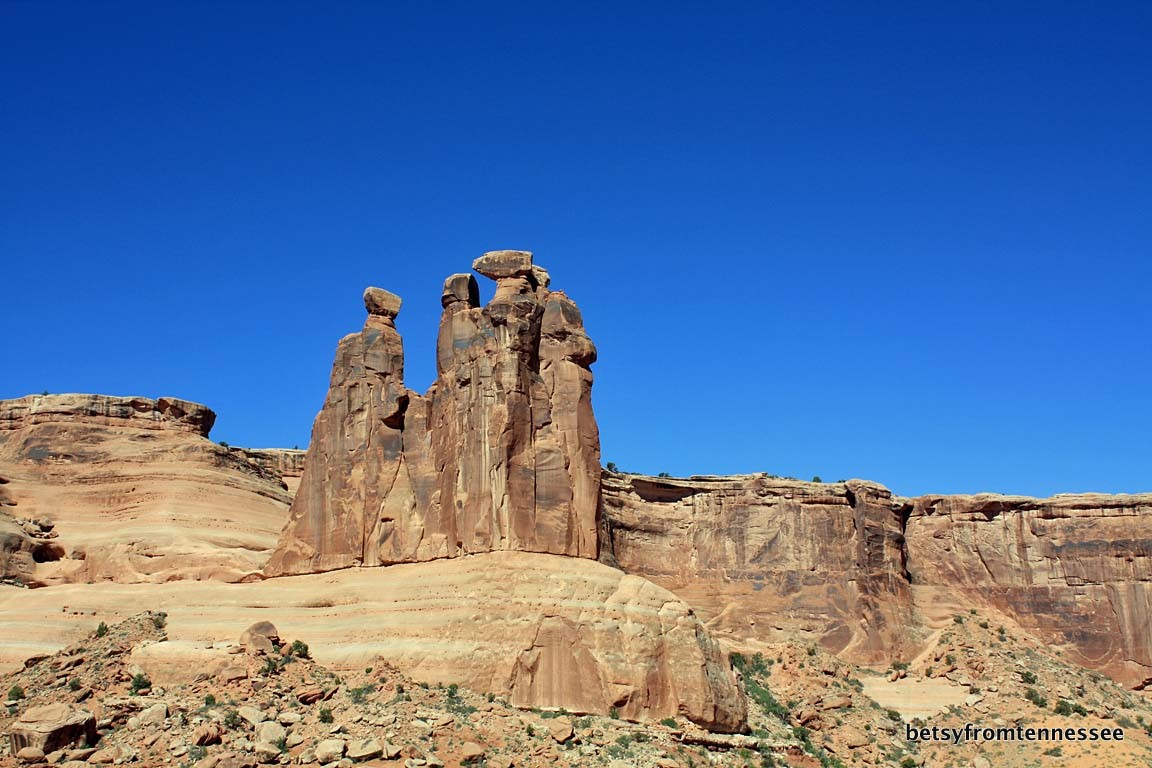 They named this one "The Three Gossips".....  Can you hear them chattering???? ha ha 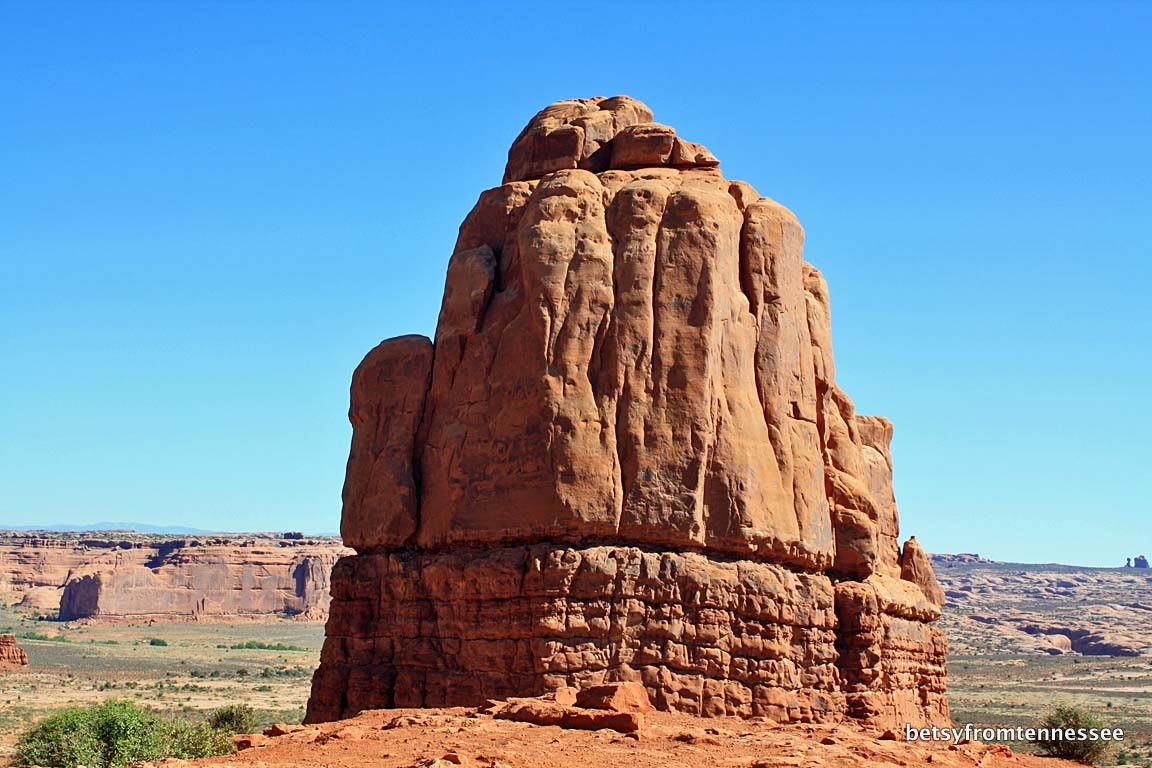 Here is another interesting rock formation...  What does it look like to you?  I can almost see some praying hands!!!! 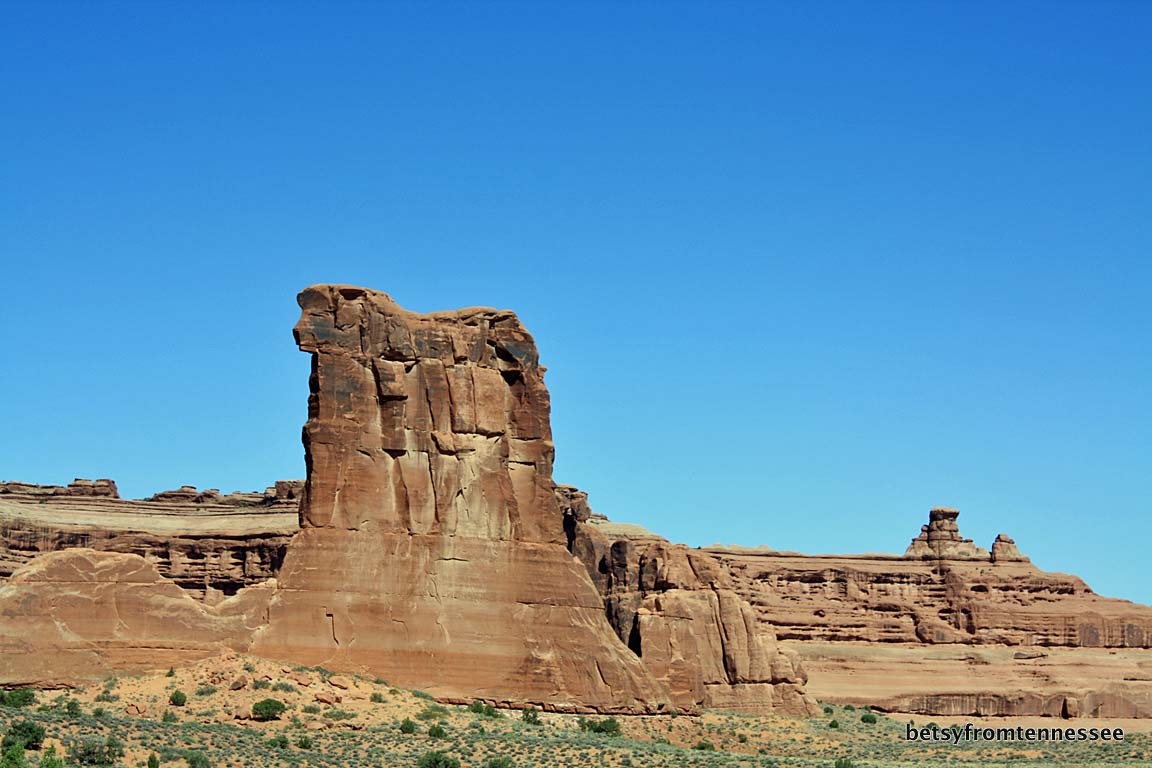 This is appropriately called  "Sheep Rock"... See the sheep on top????? 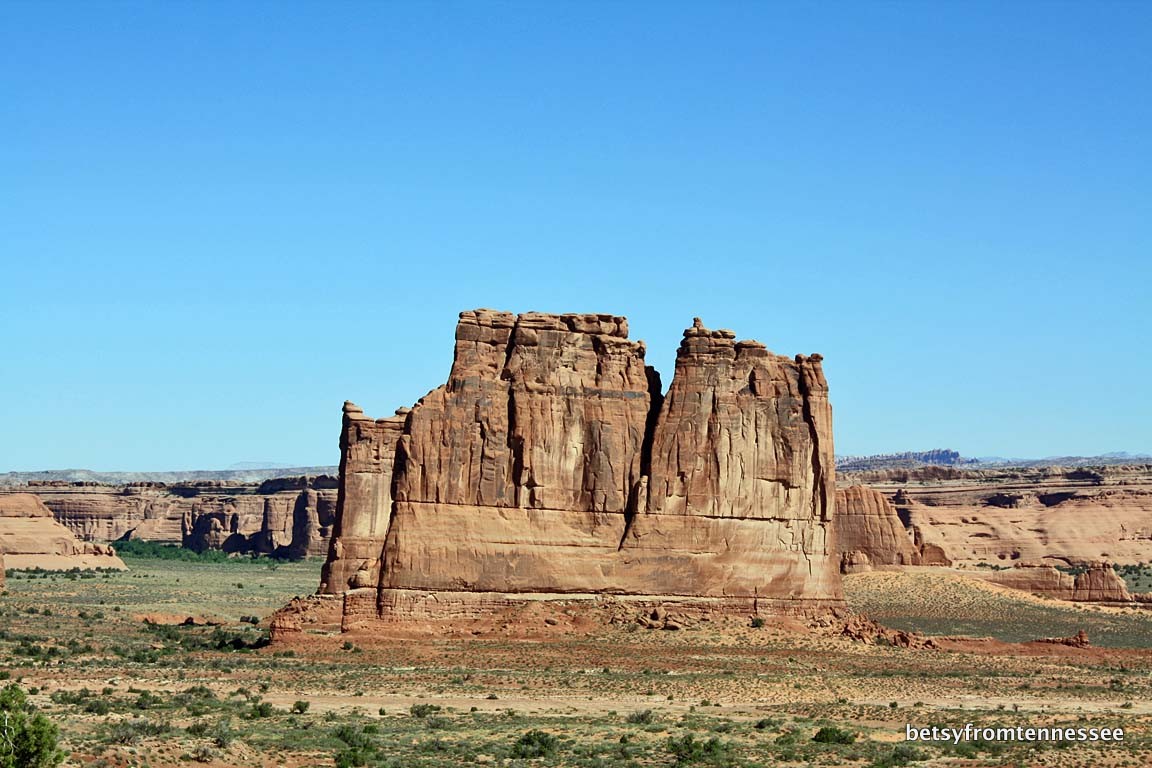 Here is what they call the Tower of Babel (on left) and the Organ (on the right).  I took this one at the La Sal Mountain Viewpoint---but was more interested in the rock formations than I was in the mountains in the distance.

Can you believe that I've shown you 7 pictures at the ARCHES, and I still haven't shown you an 'arch'?????   That will be coming up in a future post....

On another note,  have you noticed what Blogger has done for all of us--which is GOOD???  If you click on my first photo,  you'll get all of the photos in a slide show... Neat, huh?????

Hope you have a wonderful weekend.  We're headed to the Smokies today to see what kind of Fall color is there...  I will see you Monday!
Hugs,
Betsy
Posted by Betsy Banks Adams at 4:00 AM 56 comments: