Welcome to JOYFUL REFLECTIONS. My Header Picture for June 2021 shows one of our beautiful LILIES in our yard. This one is named PURPLE PRINCE.

Our Tiny but PRETTY Snow 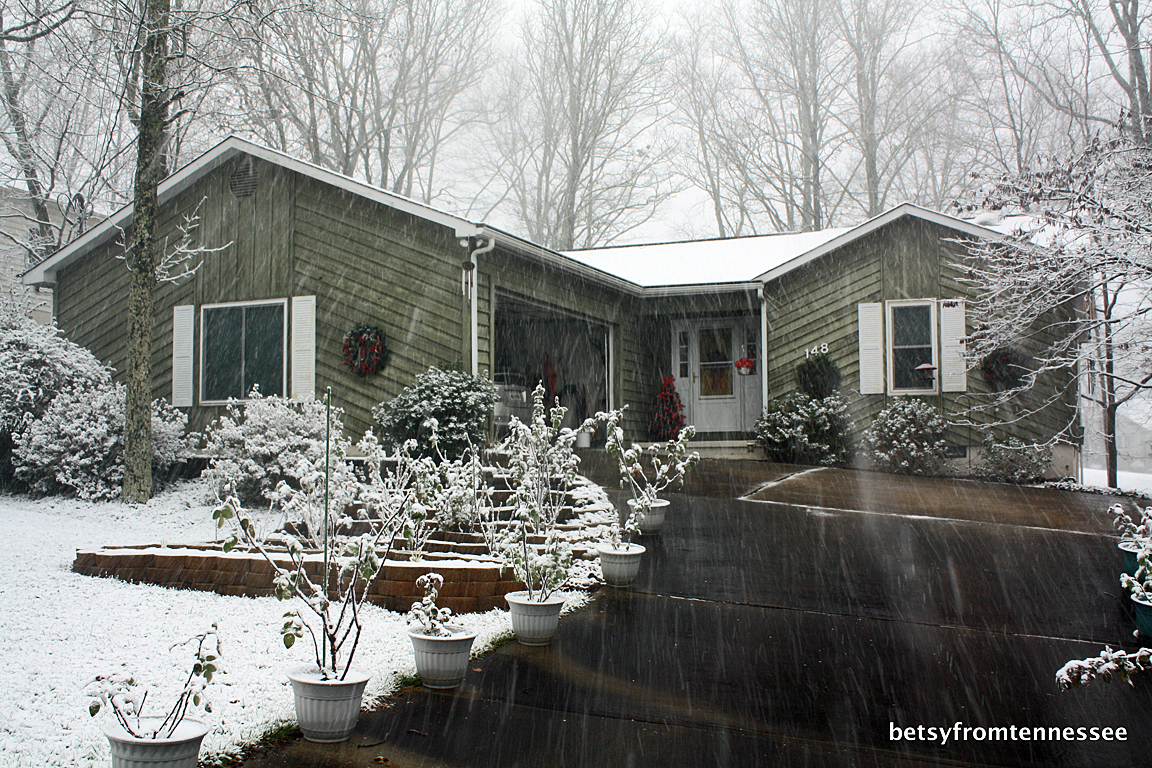 I didn't think I would do this post since I had another one ready to publish.  BUT--after seeing the pictures and getting comments from my Facebook Friends,  I decided to publish them for you today (with apologies to my FB friends who have seen them already).  BUT--I know that many of you who blog don't 'do' Facebook---so hopefully you will enjoy them.  If you click on them,  they will enlarge to 16x10.

We had one of the prettiest  snowfalls during the day on Wednesday this week, even though it was quite small.  All last year (when we had quite a bit of snow),  I kept telling George that I wanted to see one of those 'wet' snows that clings to everything....

We are supposed to have a fairly mild winter ---so this may be our only snow...  (I know that you northerners are laughing at me being so excited about a small snow like this ---since you get SO much snow. )  BUT---this truly is the perfect snow to me.  I don't need to see 9 or more inches to love it!!!!!

Above is the front of our home.  The snow was really peppering down when we were outside getting some pictures.  Compare this picture to my header above.  There was much more snow last year ---but I still like Wednesday's picture also.  Another thing I loved about this little snow was that it came during the daytime ---so we can enjoy it.  Most of our snows seem to come at nights...

Note in this picture also that the container Roses are still out... (Last year,  they were cut back and put away into the garage for the winter by now.)  We have been quite mild so far this year with a very few cold days... Interesting how every year is different from the ones before. That is what makes life interesting, isn't it???? 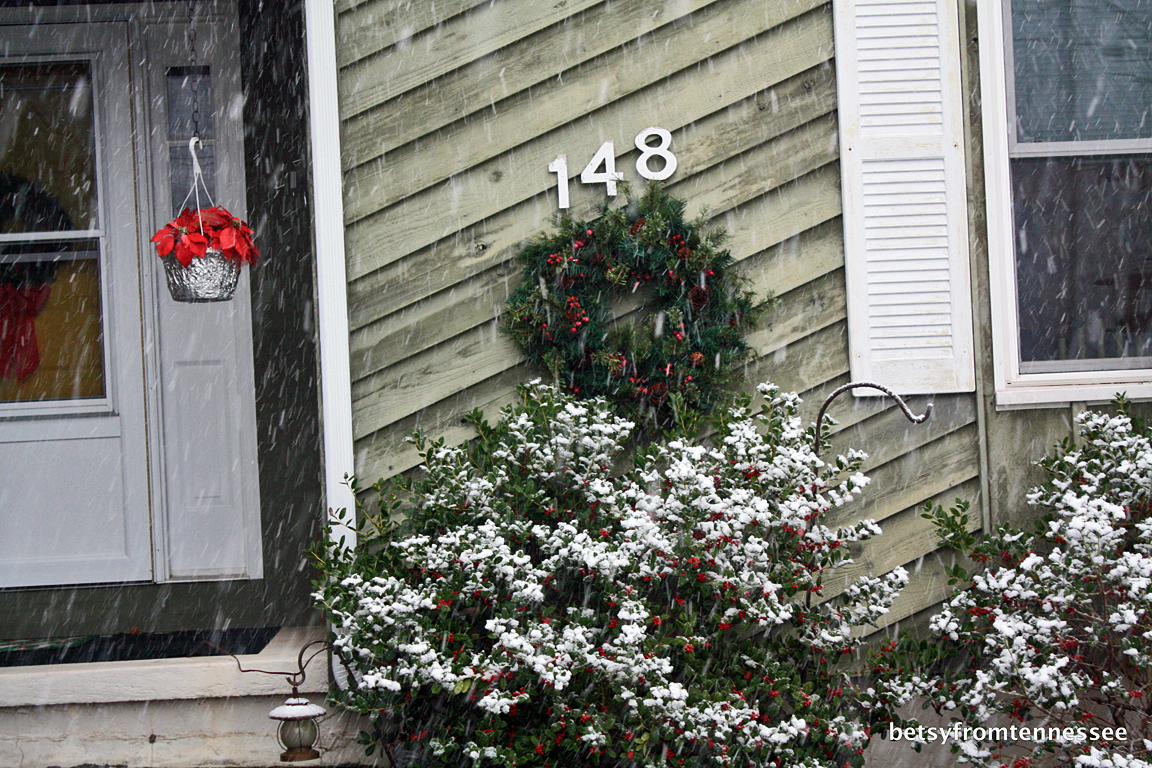 You can also tell in this picture just how much snow was coming down. 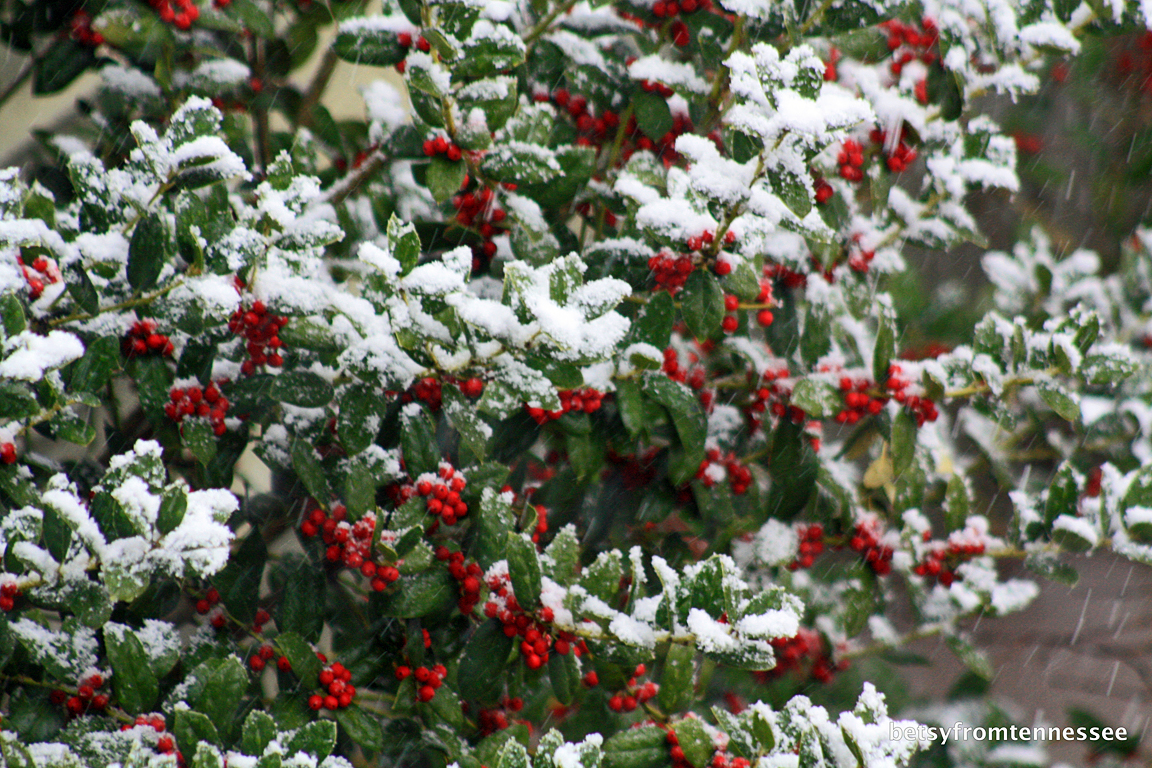 We have 3 Holly Bushes near the front porch area....  Here's a close-up of all of the berries that are on that bush this year.   Doesn't that look Christmasy?????? 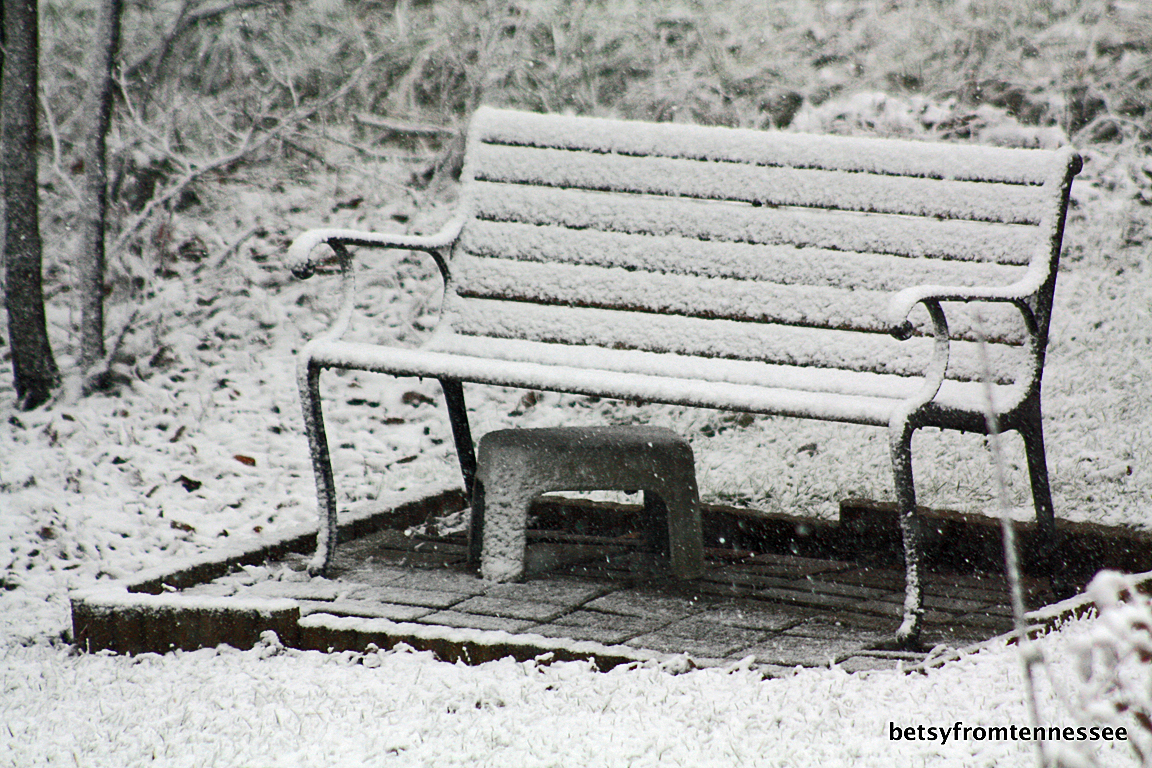 Here  is the bench in our front yard.   George built this little area for me to be able to sit out there and admire all of the Roses during the Spring/Summer/Fall...   Wanna come and share the bench with me????   Probably not ---since it's cold out there now!!! 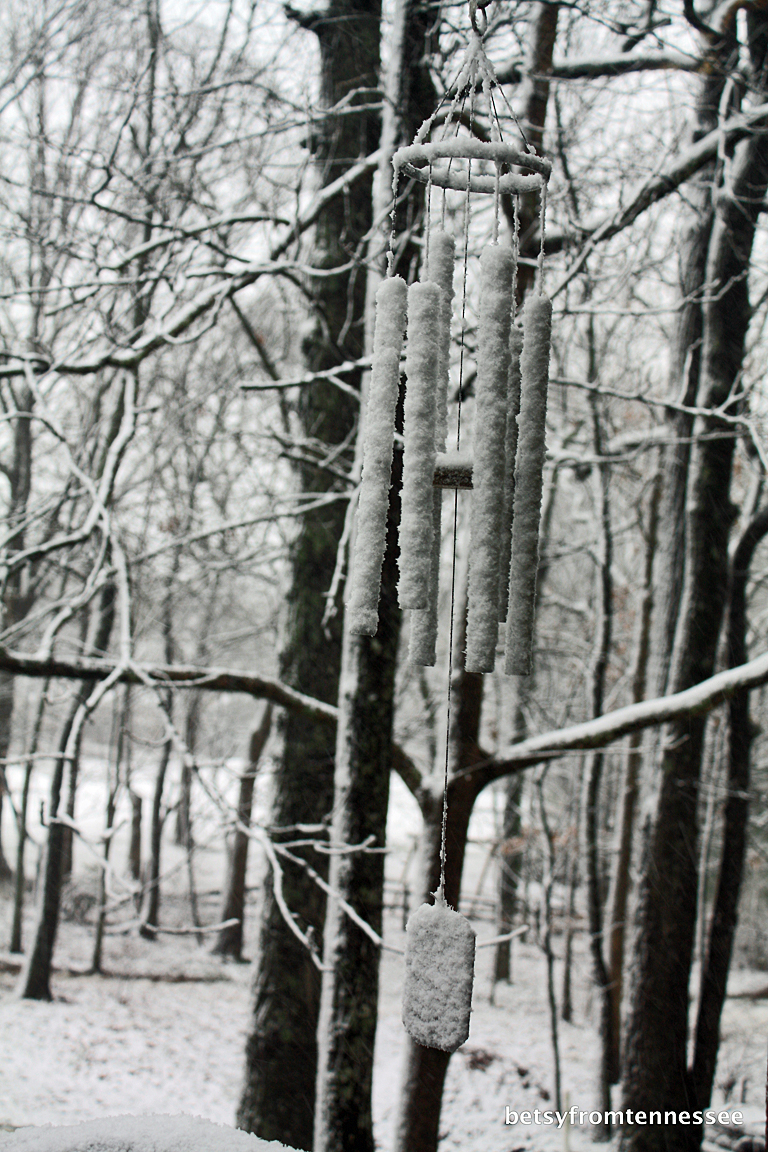 As I've said,  I love seeing how a snow like this clings to everything.  Look at this windchime.... Can you see it????? 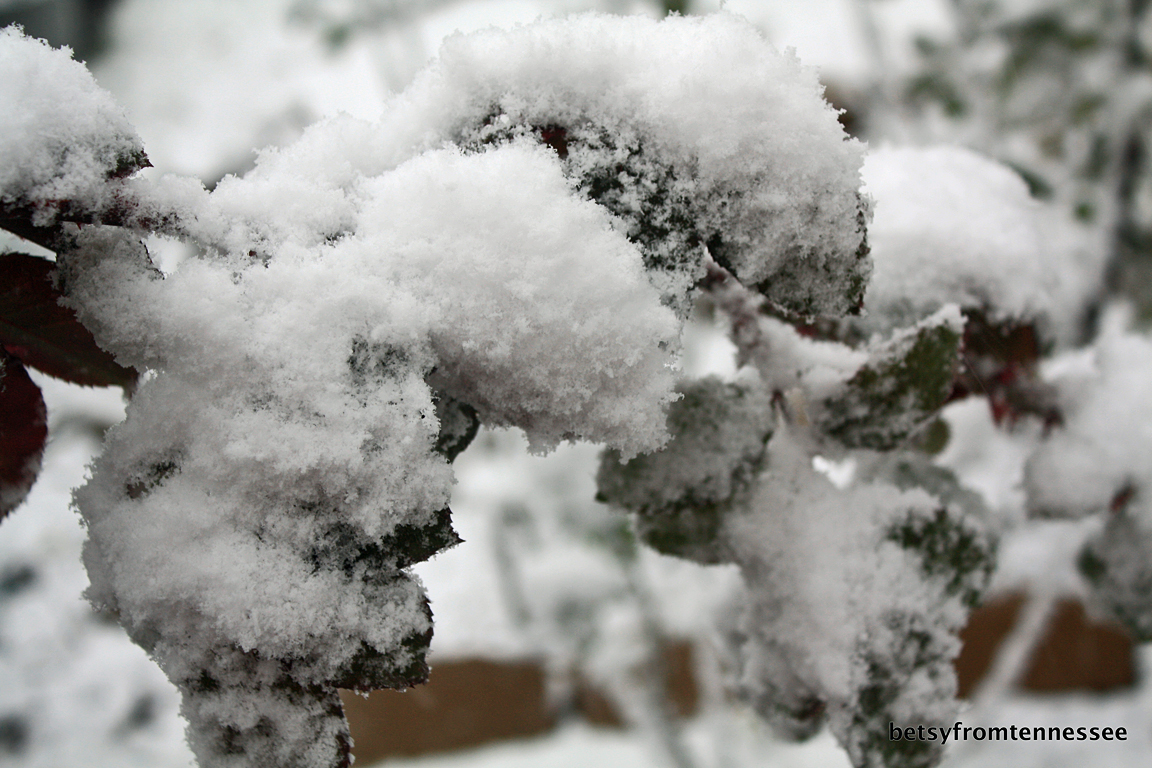 Here's a close-up picture of one of the Rose branches covered with snow. 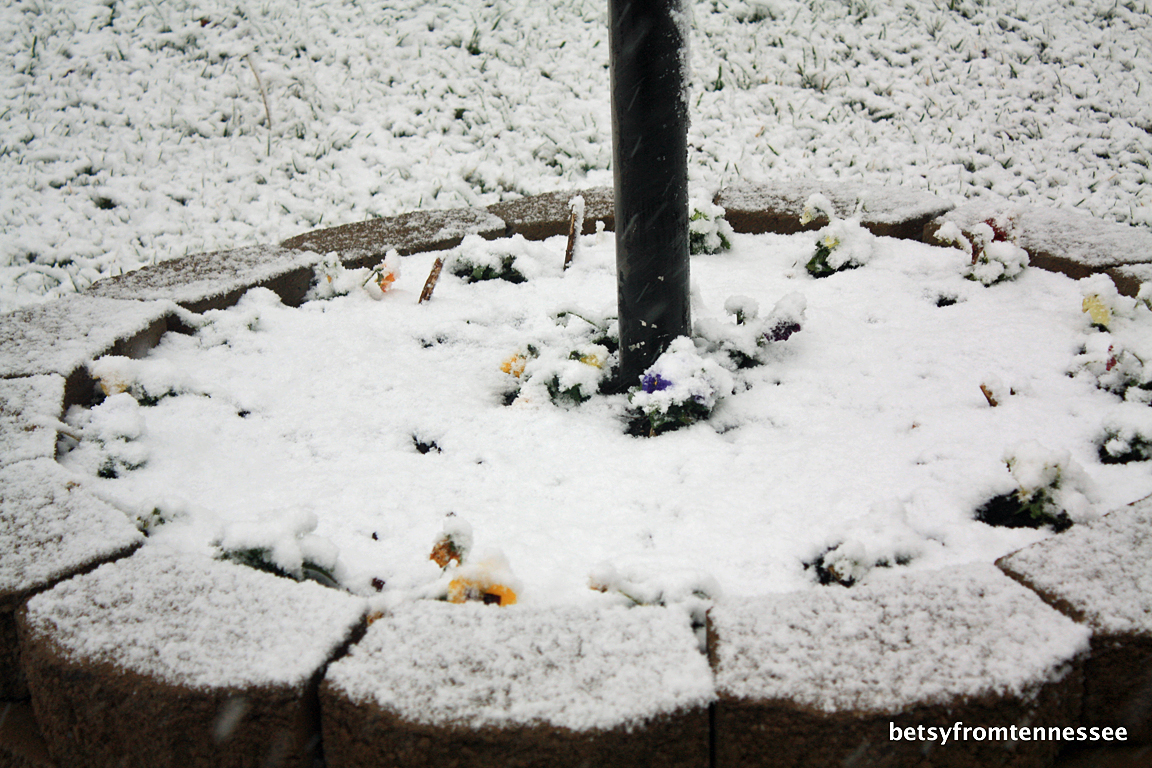 And look at the poor Pansies in this flowerbed!!!!   Don't they look cold?????  I will say though that SNOW doesn't hurt them...  In fact,  they are protected from the cold temps by the snow... What Pansies don't like is FROST and extremely cold temperatures. 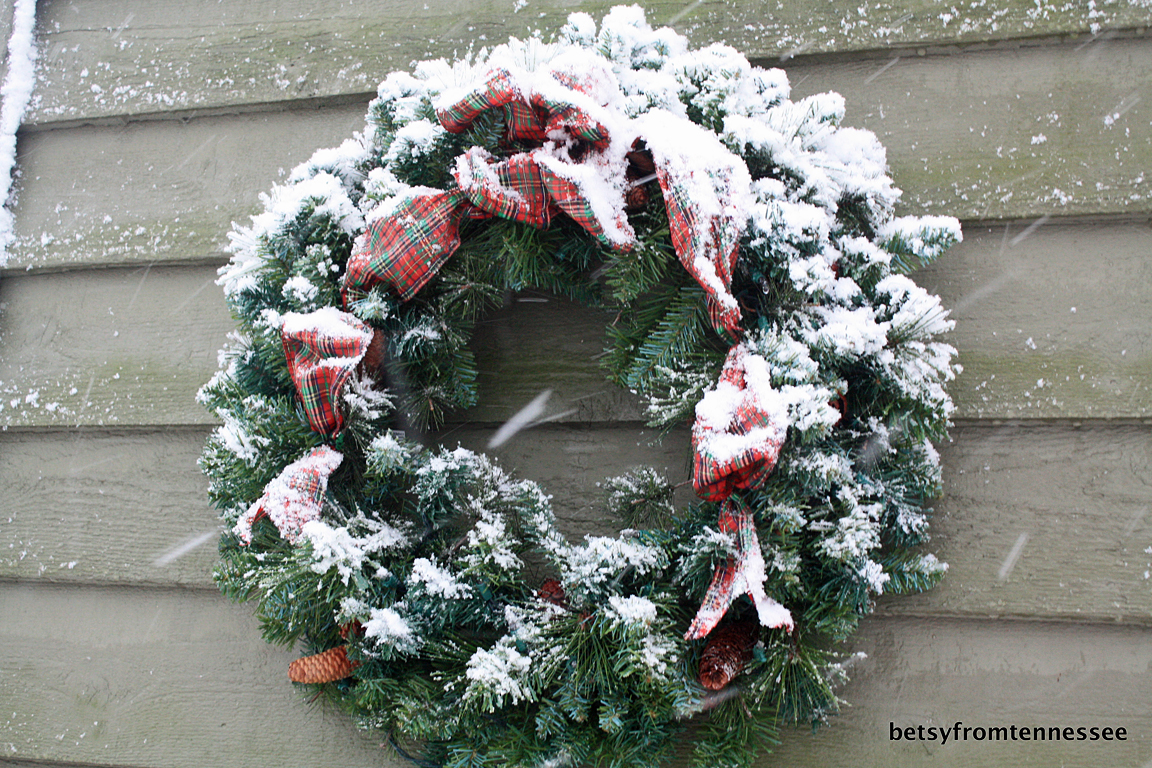 Finally,  this may be my favorite photo from Wednesday... We have 3 lit wreaths on the front of the house---and another one which is on the back deck ---hanging over the chimney area.   I told someone on a blog today that I absolutely love wreaths.  In fact,  we have a total of SIX wreaths in and around our home.   The picture above was taken of the wreath on our deck. Isn't this one pretty?

Happy WINTER to all (who are experiencing winter where you live)...  I've told many folks that we live in the best of all worlds here.  We do have ALL four seasons ---including winter.   But ---we don't have hard winters  like some do.   We also (because we are 2000 feet above sea level) don't have very hot summers either... (I was questioning that with all of the heat we had this past Summer though... ha ha )

Hope you enjoyed seeing our FIRST snow of the season!!!!   I was one happy gal!

Have a great weekend and I will see you on Monday.
Hugs,
Betsy
Posted by Betsy Banks Adams at 4:00 AM 64 comments: