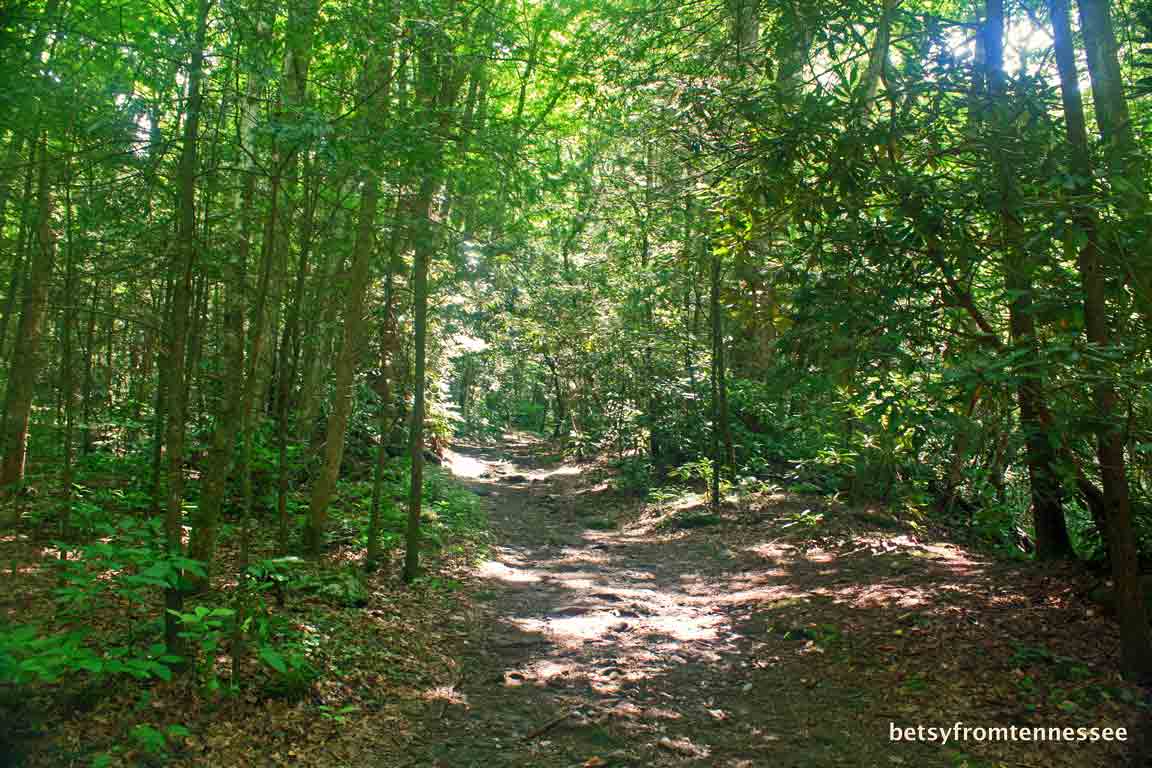 Can you believe that it is now AUGUST?  Goodness---where did July go????  The good news for me is that Fall will be here soon.  Yeah Rah!!!!!

George and I SELDOM hike during the hot summer,  especially in the crowded Smokies.  BUT--on  July 23,  after a stop in Knoxville at the Apple Store,  we headed to the east side of the Smokies at Cosby.  We decided to hike part of the Gabes Mountain Trail (toward Hen Wallow Falls)...

The hike is rated moderate because of its steepness... It's 2.2 miles one way to the waterfall which is not that far...   However,  since it was VERY hot and VERY humid on the 23rd,  we hiked for about a mile and a half --and turned around there.   SO---instead of a 4.4 miler,  we had a 3 mile hike  which seemed like a long enough hike to me!!!!

Even though we didn't see the waterfall,  we did stop several times along the way so that we could get lots of great pictures...Today I'll share with you some of what we saw along the trail on that hot summer day.

Above is a picture I took from our trail...  Other than being steep,  this area is a great place to hike.  Be sure to enlarge all of the pictures in order to see them bigger. 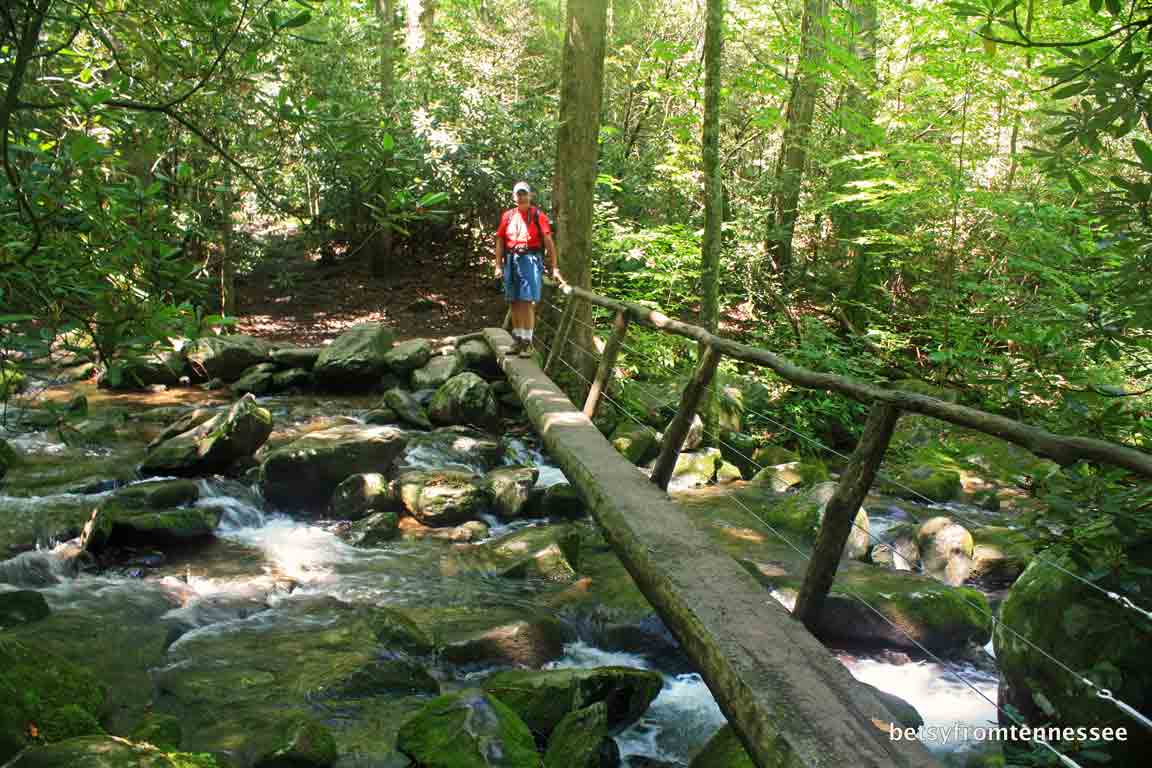 I took this picture of George on a little bridge at one of our water crossings...  This is a pretty area ---and we enjoyed our day,  despite the high humidity. 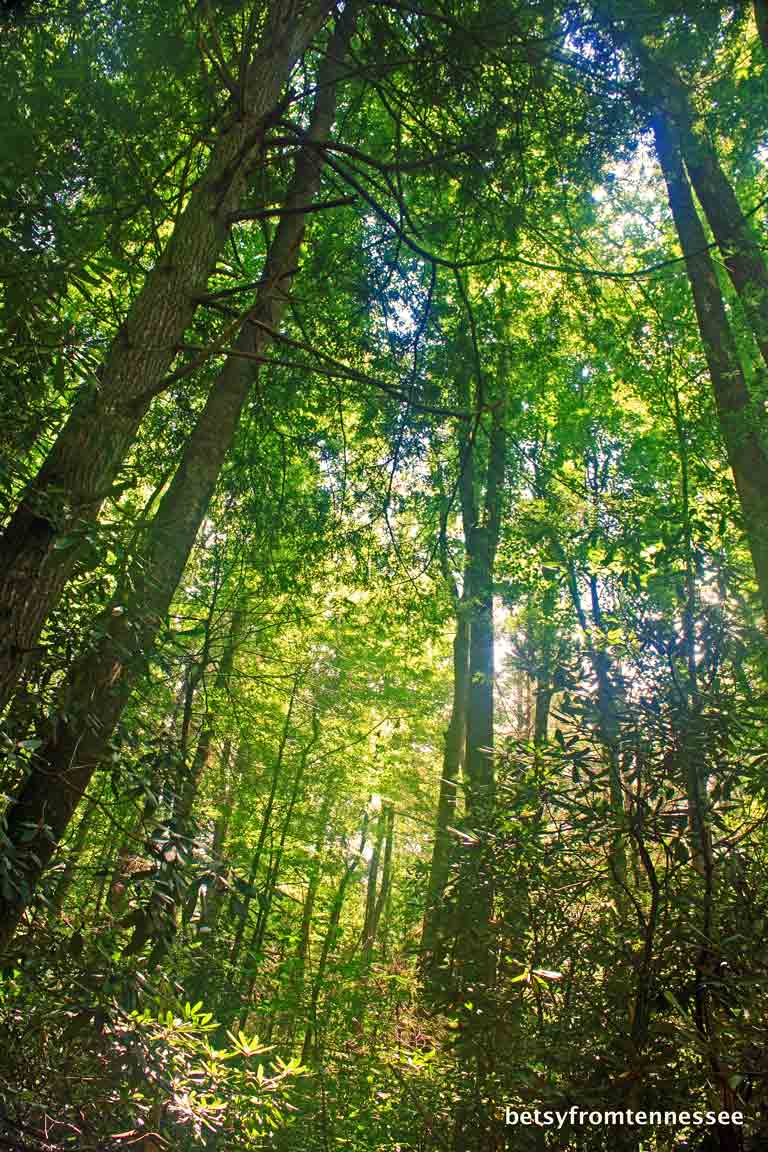 As I was resting along the trail --while George took more pictures of the creek,  I got some good pictures of the trees ---as I pointed my camera UP toward the sky... Pretty area,  don't you think? 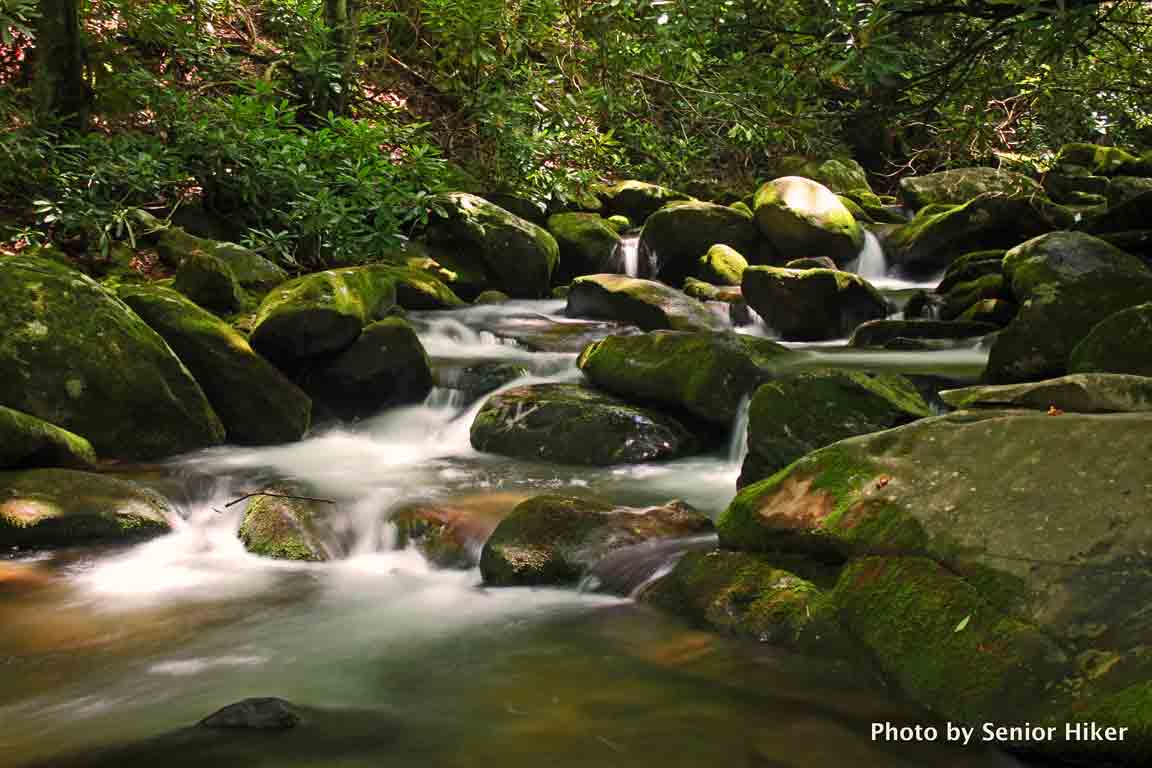 George got more great pictures of the creek using his tripod and 'special' filter....  Isn't this an awesome photo??? They have had more rain in the Cosby area recently than we have had on the Cumberland Plateau....  I got several pictures of mushrooms along the damp trail...  One even had a pretty yellow stem...  Aren't these pretty little mushrooms --with moss all around them? 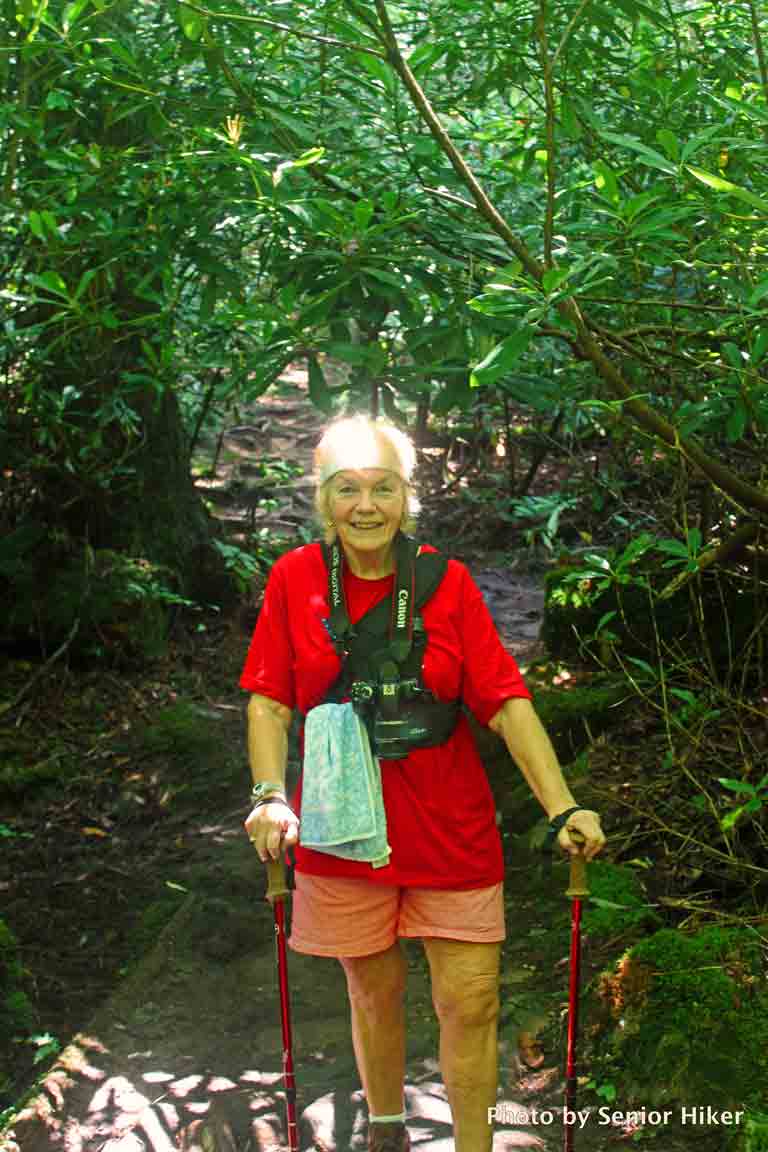 George took this picture of me on the trail...  Since it was so hot,  I was wearing my white headband --and carrying my 'sweat' towel!!!!!   I also was wearing my camera vest --which I love. 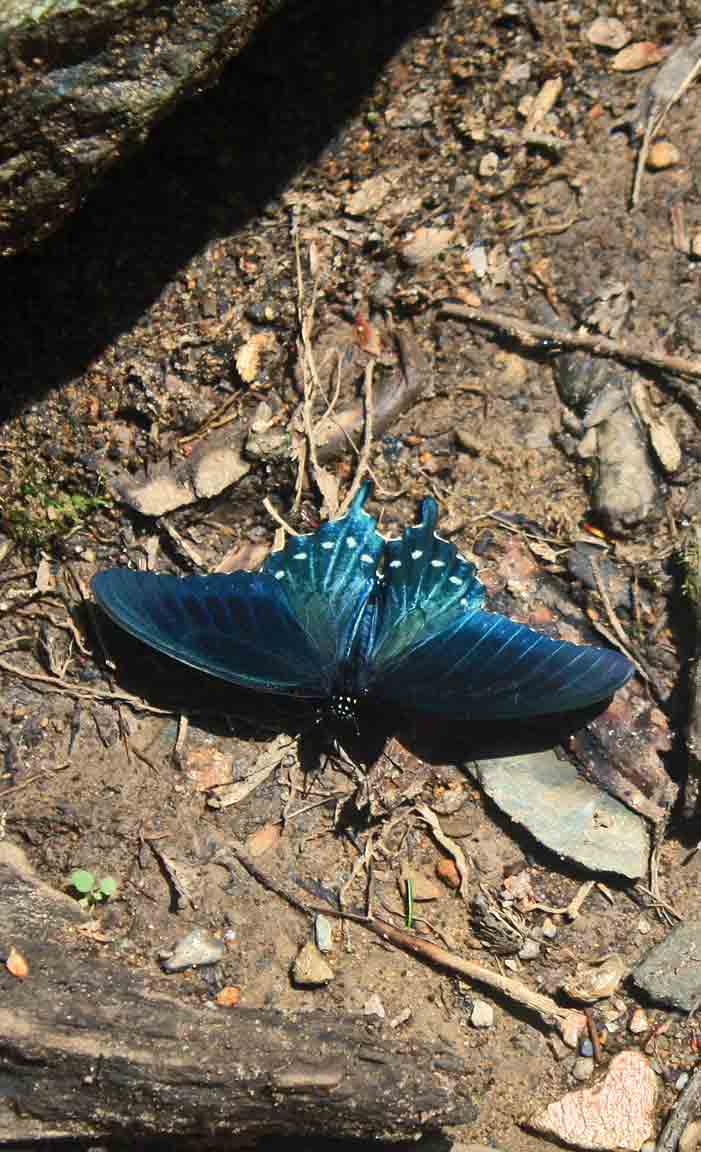 This little blue butterfly followed us for awhile.  I love its color.  Anyone know what kind of butterfly this is????   I do NOT know my butterflies ---like I do our flowers. 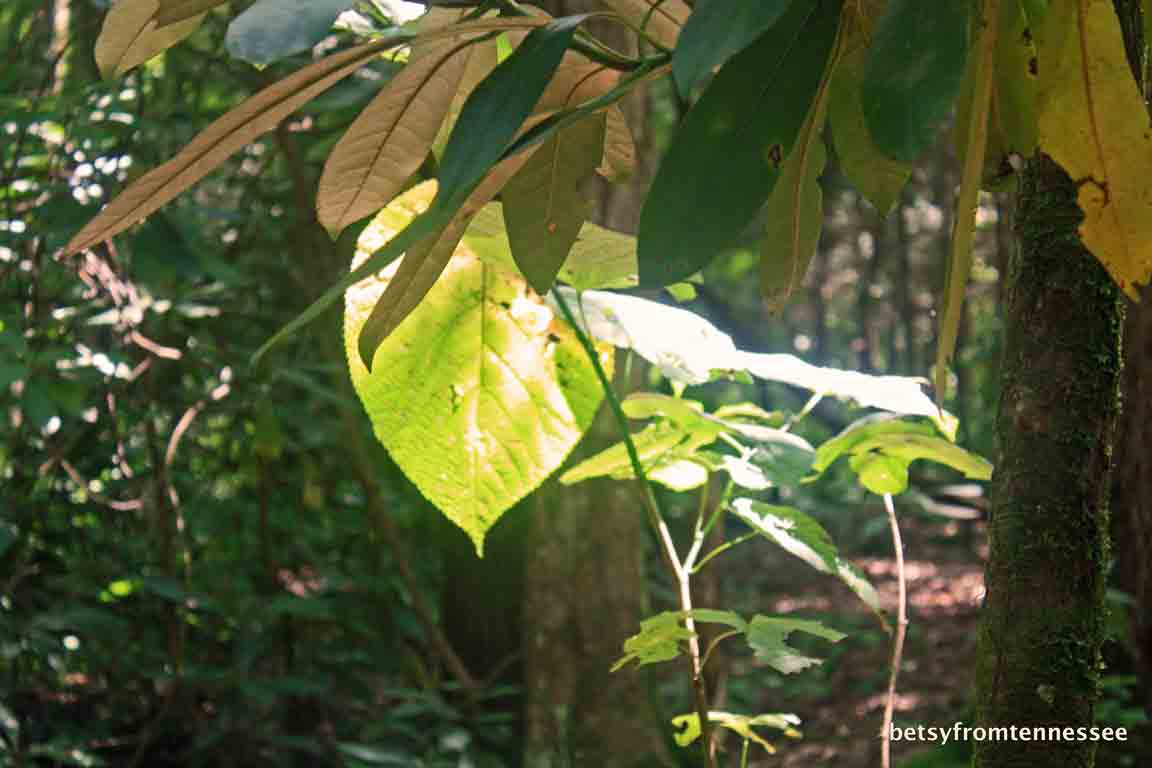 This is a 'creative' picture I took of a big leaf with the sunshine peeking through and shining perfectly on it!!!!!   You like it? 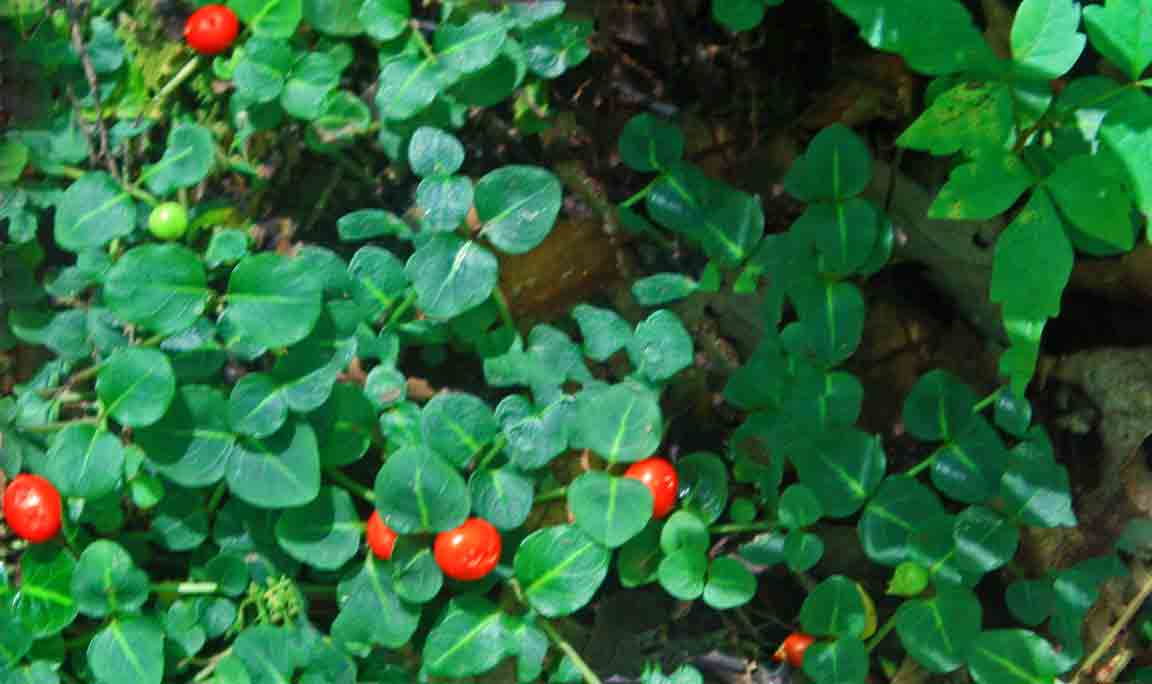 This little ground cover was EVERYWHERE along the trail... I loved it.  It is very tiny with little red berries.... Anyone know its name?????  SO PRETTY! 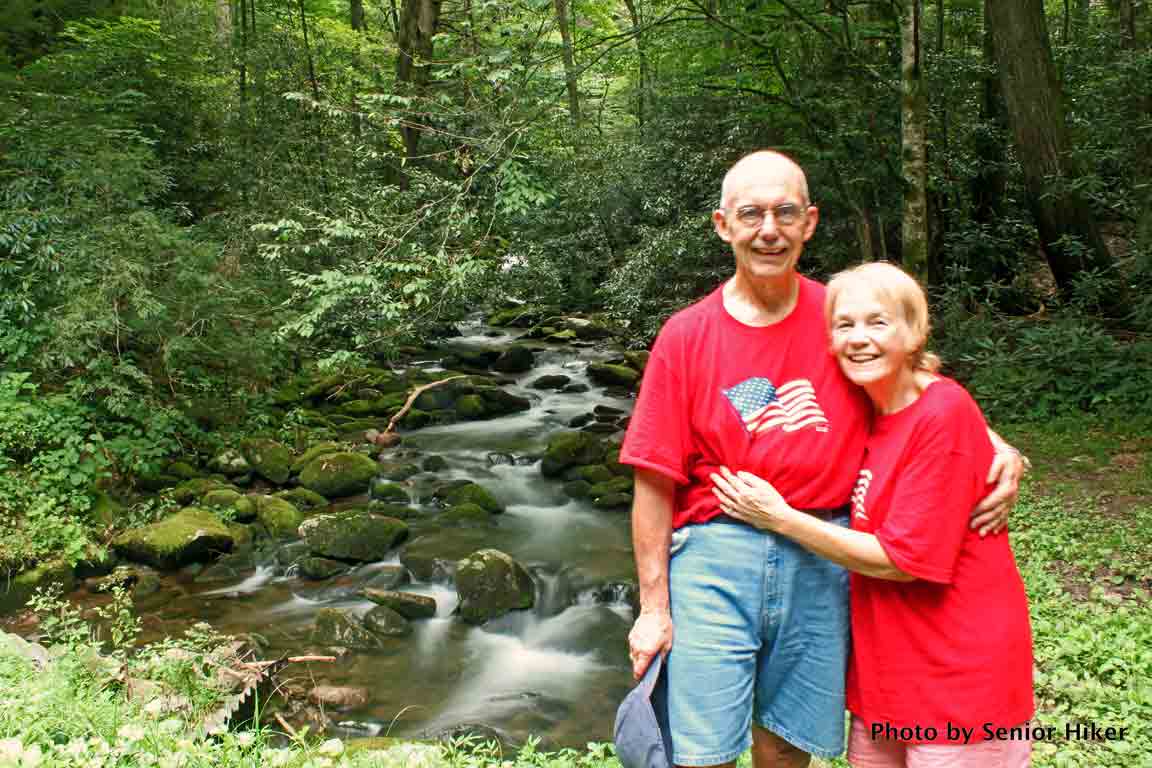 Finally,  here is a picture we took of the two of us using the tripod---beside the creek....  As you can imagine,  even though we didn't make it all of the way to the waterfall,  we did have a great day!!!

Do you like my new header?  Thought you might!!!!   We DID see the sunflowers when we were at Biltmore on Monday... Had a wonderful day!!!

Hope you have a great day today!!!
Hugs,
Betsy
Posted by Betsy Banks Adams at 4:00 AM 63 comments: