A Genealogy Trip for Me 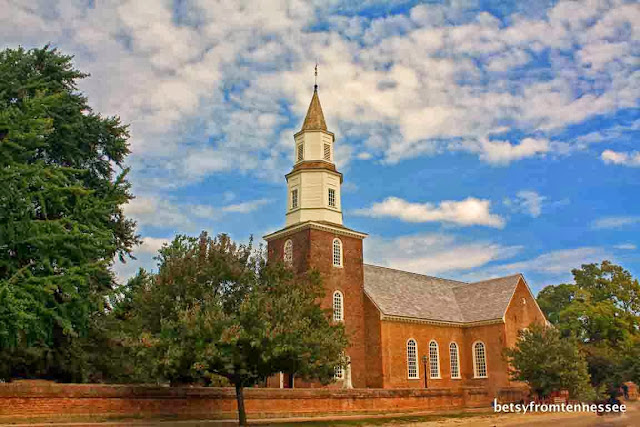 When I told you that I was taking time off from blogging to work on my Family History,  I didn't tell a fib.... I was able to do some research on my Ballard side of the family while I was in Williamsburg and Yorktown.  Granted,  we did many many other things on that trip --but I did enjoy my Genealogy visits!!!!

Today I'll share some of those visits with you... The photo above is a picture of Bruton Parish Episcopal Church in Williamsburg, Virginia.   My 8Great Grandfather was Thomas Ballard (1630-1689).   Thomas Ballard was a man of wealth --and had been VERY active in that church during its beginnings. 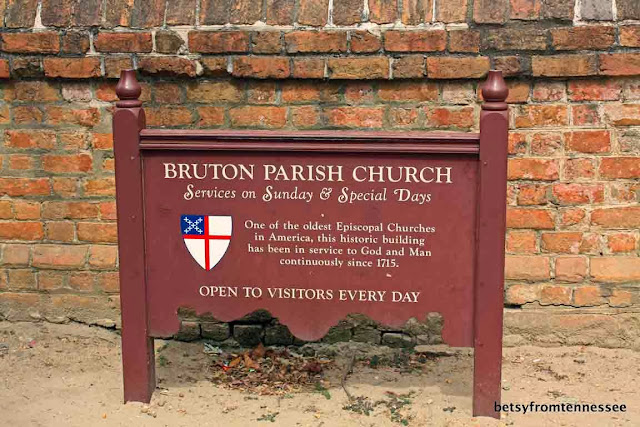 Here is a photo  of the sign outside the church. There were historians available for us to talk to about the history of the church and area.  I had a wonderful conversation with a lady who knew quite a bit about the Ballard's. 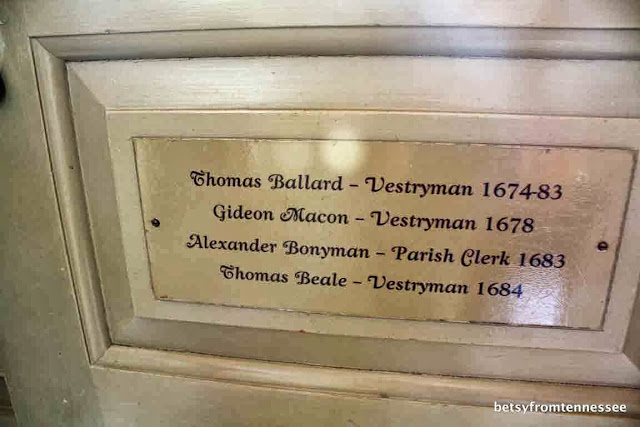 This inscription is on one of the pews in Bruton Parish Church.  As you can see,  Thomas Ballard was very involved with the church,  and was on the vestry from 1674-83.  (We had been to Williamsburg and to Bruton Parish in 2007--but at that time,  I didn't realize that I had a relative who had been so involved with that church.  This visit was so meaningful.) 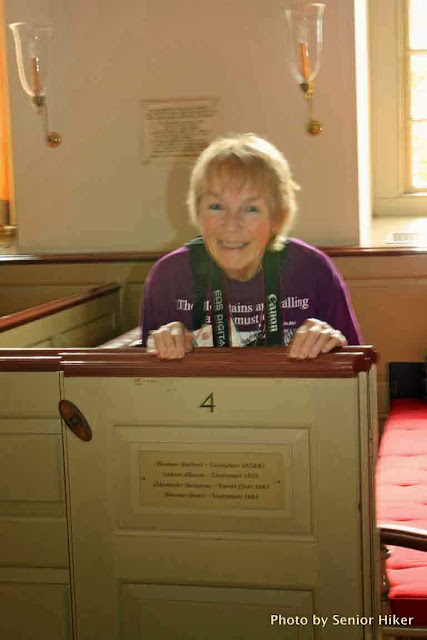 Here's a happy woman ---at the pew which honors her 8Great Grandfather Ballard (on my mother's side of the family).  Besides being involved in the church,  Thomas Ballard was a very important man.  Some of the things I have learned about him are:
-He was called the 'founder' of the Virginia Ballards
-He was thought to have come from England, from a wealthy family
-He was known as the Honorable Thomas Ballard
-In 1650,  he married Anne Sara Thomas,  and they had 8 children
-He was a tobacco farmer and merchant and owned alot of land
-From 1652-1663,  he was the Clerk of Court of York County, VA
-In 1666,  he was Burgess of James City County
-In 1669,  he became Lt. Col of the Militia in James City County
-In 1680,  he became Col of the Militia
-From 1675-77,  he sat on the regional Royal Governor's Council
-He was re-elected to the House of Burgesses and became Speaker of the House from 1680-84. 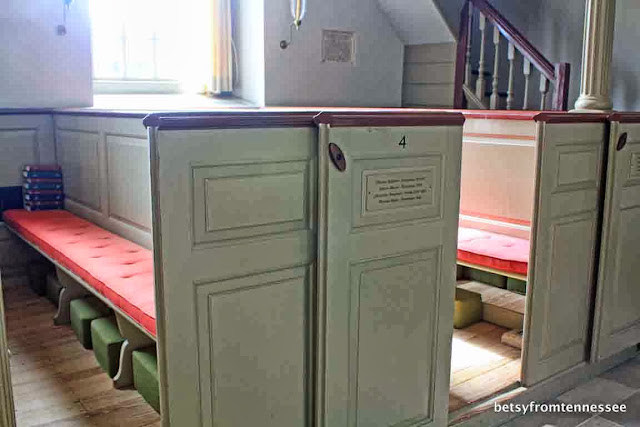 Here  is another photo showing the pews in this church.  Each pew has its own door --and the doors can be closed. 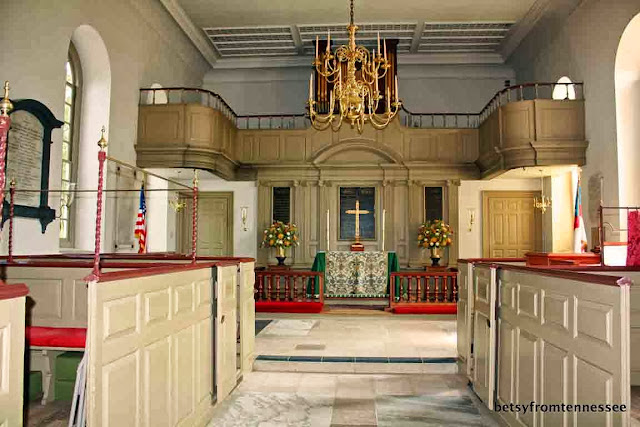 Here is a photo of the church --looking toward the front and the altar.  The altar and communion rail are of black walnut. 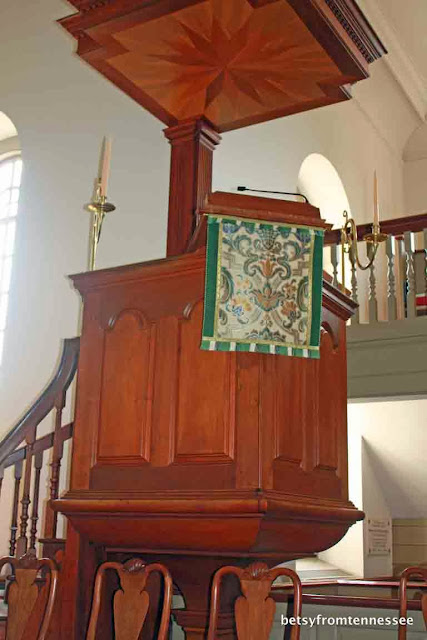 The minister is WAY UP THERE.... These high pulpits were popular back then...  The church was renovated in 1939---which is when this pulpit was built. 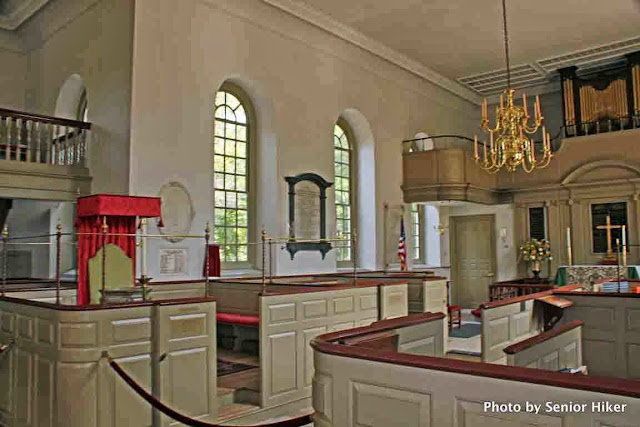 George took this shot showing more of the church.  The special pews near the front were for very special people such as President Thomas Jefferson or President George Washington. 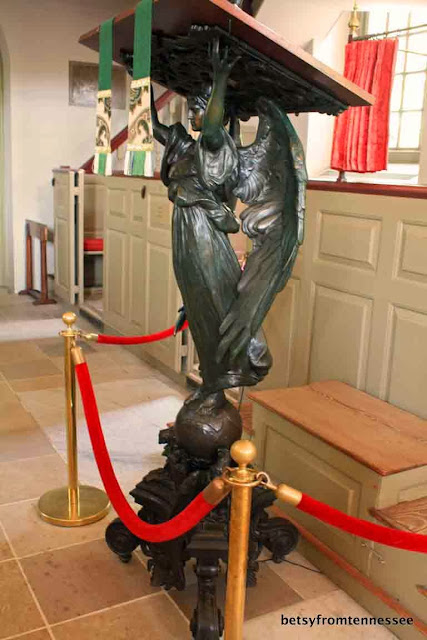 This bronze lectern was given in 1907 by Pres. Theodore Roosevelt.  There is an American eagle on one side and the British lion on the other side.  The lectern was designed to hold the Bible given by King Edward VII. 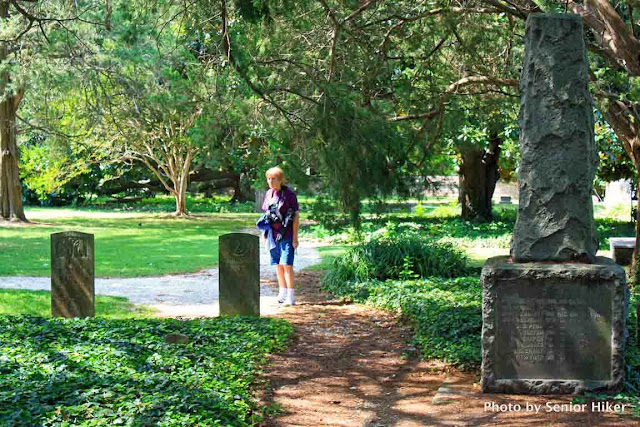 Next,  we took a tour (with one of the church volunteers) of the cemetery surrounding the church.  It is written (in several accounts) that Thomas Ballard is buried at Bruton Parish --but I found out that his grave (along with many others during those early days) is unmarked.   SO---I was a little disappointed not to be able to see his grave/tombstone. 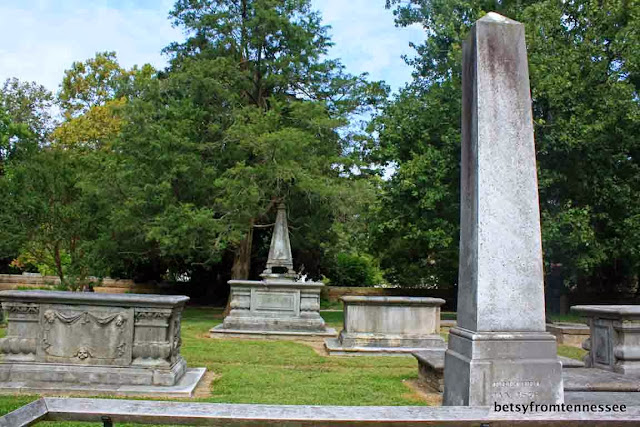 The cemetery is interesting to visit---but it is closed to the public (unless you get permission and have a church volunteer go with you--like we did). 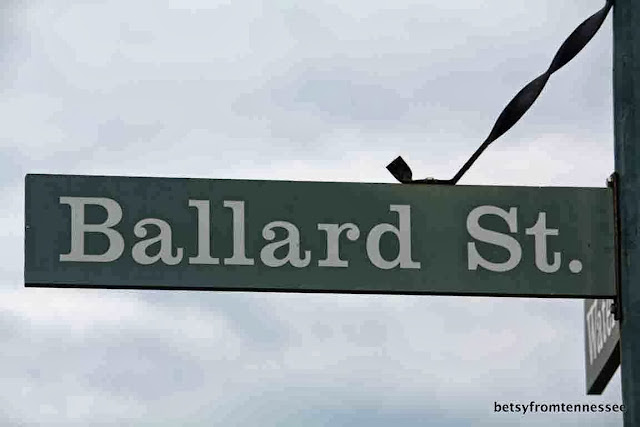 Next we went to Yorktown for some more Family History.  Thomas Ballard's grandson,  Capt. John Ballard, lived here.  And, as you can see from the photo above,  there is a street in Yorktown named Ballard Street.  It is one of the major roads in Yorktown, VA. 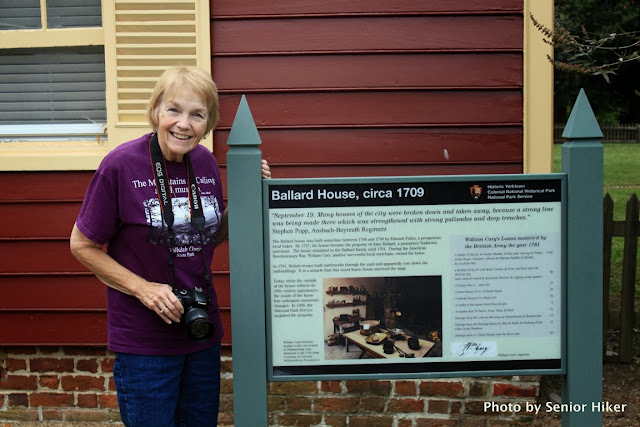 Captain John Ballard (1693-1745)  is my 6Great Grandfather.  He was a merchant in Yorktown and a captain in the militia.  He married Elizabeth (Bland/Wallace/Gibbons) and they had 7 children.   NOTE about Elizabeth's last name:  There are many different accounts --and nobody knows for sure which family she is from.  I'd like to think it's Bland --since there are so many Bland Ballards in our family.

I was so happy to be here and experience this history.  The Ballard House was built between 1706 and 1709. 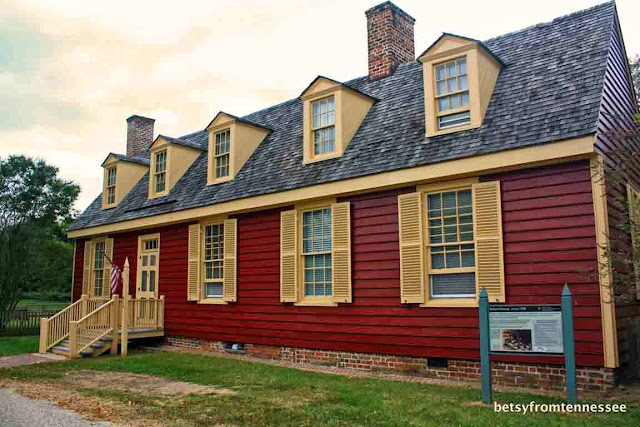 John and Elizabeth Ballard and their family lived on this property from 1727-1744, but the house remained in the Ballard family until 1761..   This is the Ballard House today.  They have preserved it --and it is in good shape.  The inside is very different today--but the outside is very similar.  In 1968,  the National Park Service acquired the property. 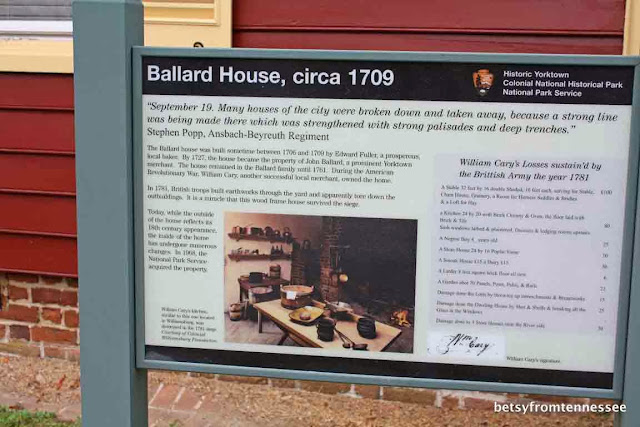 This is the sign outside of the Ballard House.  You will need to click on this in order to see it closer.  You can see what the kitchen probably looked like back in the 1700's.

I bought 3 new books while on this trip.  One of them is about Colonial Yorktown (and shows photos and info about the Ballard House).  The other two are about Bruton Parish Episcopal Church.  It's great to read Thomas Ballard's name in the history of the church and the entire community.

For instance, in 1693 Thomas Ballard was responsible for providing the land for the formation of William and Mary College.  Then in 1997,  when the college was doing some utility work,  remains of a foundation were found.  Excavation was then done ---and remains of a home which may have belonged to Thomas Ballard were found.  I wanted to see that area while there,  but couldn't work it out this trip.  (It's an excuse to go back,  don't you think????? ha) 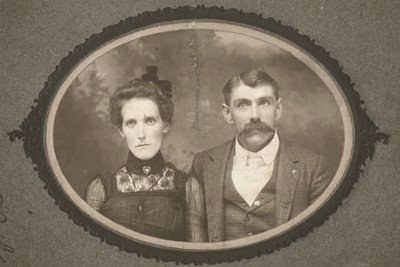 This is where it all started for me... These are my Grandparents on my mother's side of the family.  My grandmother was Ida Elizabeth Bruce (1874-1904) and my grandfather was  James Franklin BALLARD (1861-1936).

Hope you have a good weekend.  Hope we get some rain from that storm.. We NEED it here.