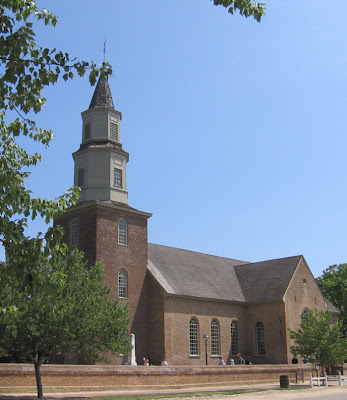 For the past few weeks,  I have reading all of the info I can find on my 8Great Grandfather THOMAS BALLARD  (1630-1689).   It seems that nobody knows for sure whether Thomas was born in England or in Virginia.  Since he was an educated man,  some researchers say that he was born and educated in England --and then came to America.  But---we don't know that for sure. We do know the following about Thomas Ballard:

I have TWO interesting stories to tell you about Thomas Ballard, but they will wait for another upcoming blog post.  Today,  I will share a few pictures of Thomas Ballard's church,  Bruton Parish.   IF you have ever visited Colonial Williamsburg,  you surely have seen and probably visited Bruton Parish Episcopal Church.   I'll share with you some pictures of this gorgeous church..  Above is a picture of Bruton Parish as it looks today.  Below are more.

Here is Bruton Parish from another angle.  You can see the cemetery.  My 8 Great Grandfather is buried in this cemetery. 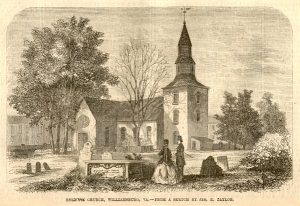 And here is an old postcard showing Bruton Parish Church. 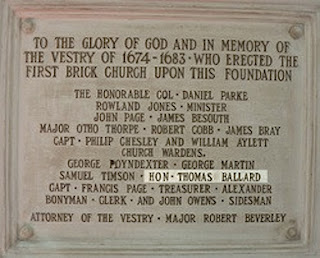 A bronze tablet can be found on the interior of Bruton Parish.  You can see Thomas Ballard's name on it. This committee helped erect the first brick church on that foundation.

Thomas Ballard also had his name inscribed on one of the pews...  Thomas was in good company since there were other names listed on some of the pews in the church,  namely Thomas Jefferson and George Washington. 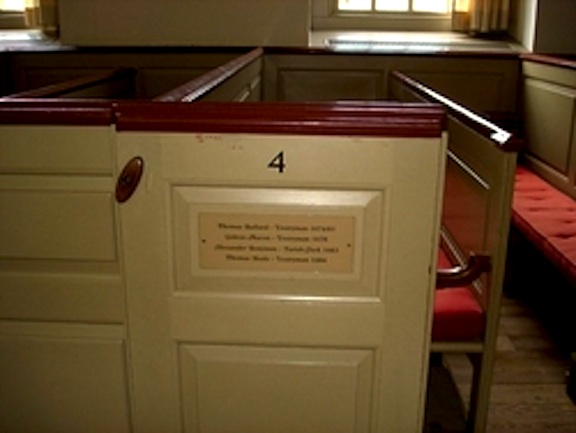 This is a picture showing some of the names inscribed on one of the pews.  The pews with doors were/are typical of unheated 18th century English churches.  Thomas' name is the top one,  but it is hard to read in this picture.   It says:  "Thomas Ballard - Vestryman 1674-83".

Pretty special man,  don't you think?????  AND to think that he was one of my Grandfathers... WOW!!!!!   George and I visited Williamsburg in 2007--but that was before I knew all of this information about Thomas Ballard.  Now---I'm ready to go back and see it all for myself.

Like I said,  there are two more very interesting stories about this man... I will share them at a later time..

Hope you have a wonderful day --and don't forget to talk to your older loved ones and get all of the information you can before they are gone and can't share it with you.   I waited too long --and am now doing this from notes and on my own.

ALL pictures in today's post came from the internet.
Posted by Betsy Banks Adams at 4:00 AM 59 comments: