On Monday, June 20 (as part of our 3 week trip out west),  George and I drove first on Scenic Highway 14 to Cedar Breaks.  (I will blog much more on Cedar Breaks at another time).  Anyhow--after leaving Cedar Breaks,  we drove through Cedar City and headed south on I-15 to KOLOB CANYONS.

Kolob Canyons is a lesser-known section of Zion National Park --but is in a fabulous location (just off of Interstate 15 south of Cedar City).  Even though it is not as popular as Zion and not nearly as large,  Kolob (sometimes called the Finger Canyons) offers soaring cliffs of red Navajo sandstone and deep pocket canyons just waiting for someone like us to discover!!! We loved it there since it was so peaceful and serene----AND there weren't nearly as many people around!!!! Yeah!

The word "Kolob" is from Mormon scripture meaning "residence closest to heaven".  We took the scenic byway (which is only about 5 miles long).  This route followed along a ridgeline,  climbing over 1100 feet in elevation, while we enjoyed the deep reddish-orange cliffs,  protruding abruptly from the ground as the road  followed portions of Taylor Creek,  the headwaters for Kolob Canyons.  The road ended at a turn-around place called the Timber Creek Overlook, which was a nice place for a hike.

The first inhabitants of the Kolob area were the Anasazi (or "ancient ones").  Very little is known about them or why they disappeared from the southwest region about 1200 AD.  The Paiutes were next to establish themselves in the area, and they still consider Kolob to be a sacred place to receive emotional and spiritual sustenance.

The Spanish explorers, Dominguez and Escalante, first documented the Kolob Canyons as they tried to establish a trail from New Mexico to California.  Mormon pioneers settled the Kolob area in 1852.  They used the area for a variety of purposes (timber, raising livestock, prospecting minerals).  Kolob Canyons was set aside for protection as a national monument in 1937 and added to the Zion National Park in 1956.

Here are some pictures we took from Kolob Canyons when we were there.  Above shows one of our first views of the canyons when we entered the park.  All we could say was WOW!  It doesn't look real, does it? 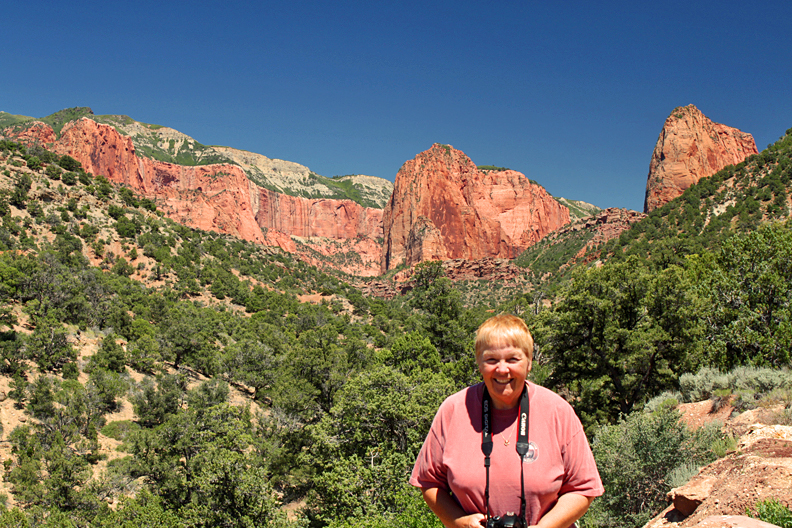 George took this picture of me as I admired Kolob Canyons at one of the overlooks.  Behind me is the Horse Ranch Mountain,  one of the tallest peaks,  at 8926 feet. 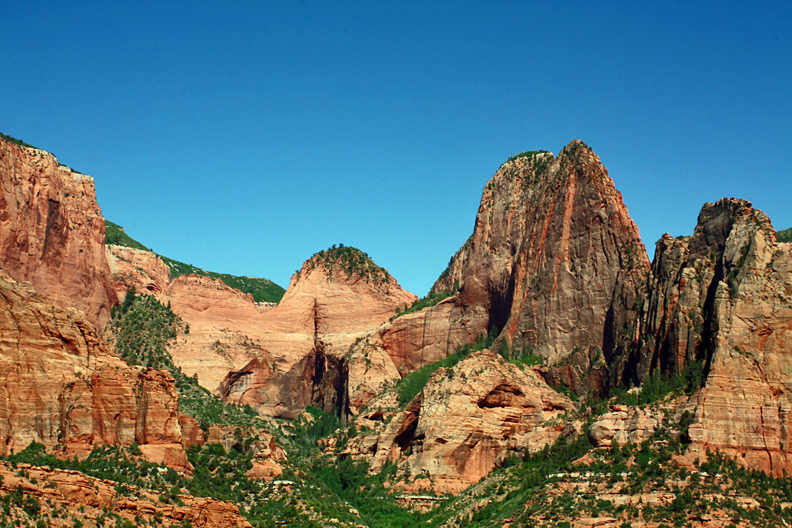 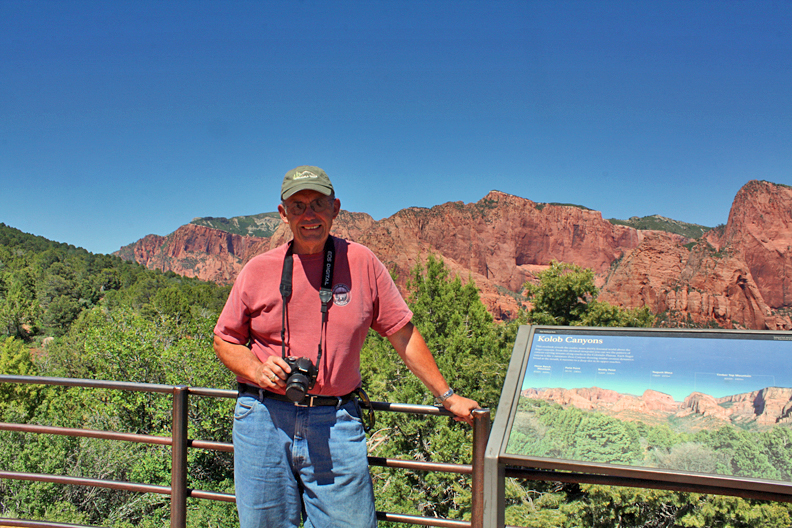 I took this picture of George at one of the overlooks.  It was interesting that it named all of the mountain ranges in that area. 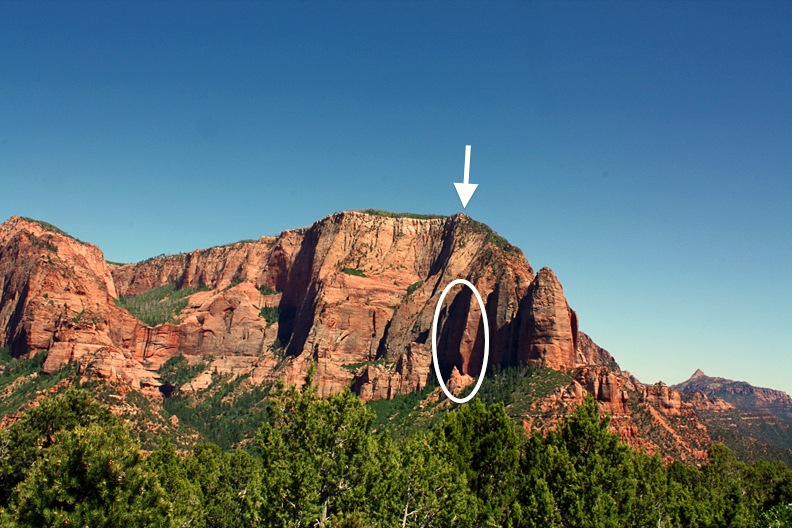 The cliffs appear solid and motionless.  But the visible scars tell a different story.  In July of 1983,  a huge slab  broke off the cliff marked with an oval.  It left a buff-colored scar and tons of rubble at the base. The entire event was over in minutes.

These canyons are not permanent scenery.  Many rockfalls shaped the dynamic and evolving canyons.  Dramatic facelifts like the 1983 rockfall are relatively rare,  but frequent small piles of rocks on the roadway reveal this terrain's volatile personality. 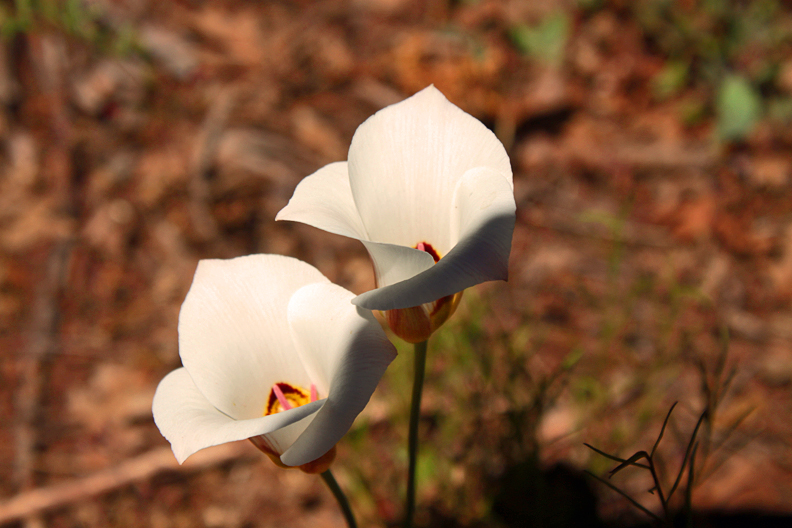 George found this adorable little flower while hiking the Timber Creek Overlook Trail.  So of course, we had to take a picture of it... This is a SEGO LILY,  the state flower of Utah.  I had never heard of one or seen one before.  They are SO pretty.   Did you know though that the bulbs of this lily were roasted, boiled or made into a porridge by Native Americans and were also used as a food source by the Mormon pioneers?  (Isn't it interesting what we can find when we search for more info!!)

The Sego Lily has 1 to 4 flowers,  each with 3 white petals.  They bloom in early Summer and are 6-18 inches in height with linear leaves.  This plant is native to a number of western states. 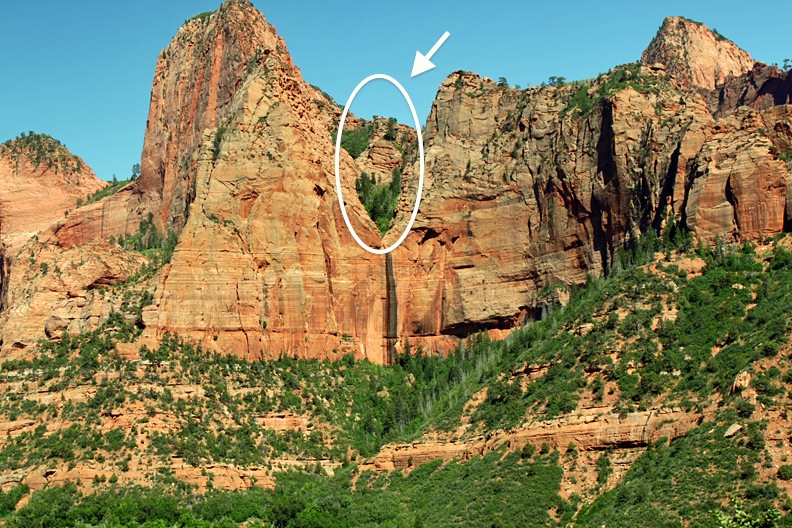 Find the hanging valley!!!!  The tracks give it away.  Dark mineral stains on the wall (below the oval) indicate an occasional waterfall that pours over the cliff after heavy storms.  Waterfall tracks can also indicate that a hanging valley lies above them.

So what is a Hanging Valley, you ask!!!!  It is a tributary valley with the floor at a higher relief than the main channel into which it flows.  The upper valley appears to be 'hanging' above the main valley.  Often,  waterfalls form at or near the outlet of the upper valley (as the picture shows above).  If you have seen Bridal Veil Falls in Yosemite National Park,  it flows from a hanging valley. 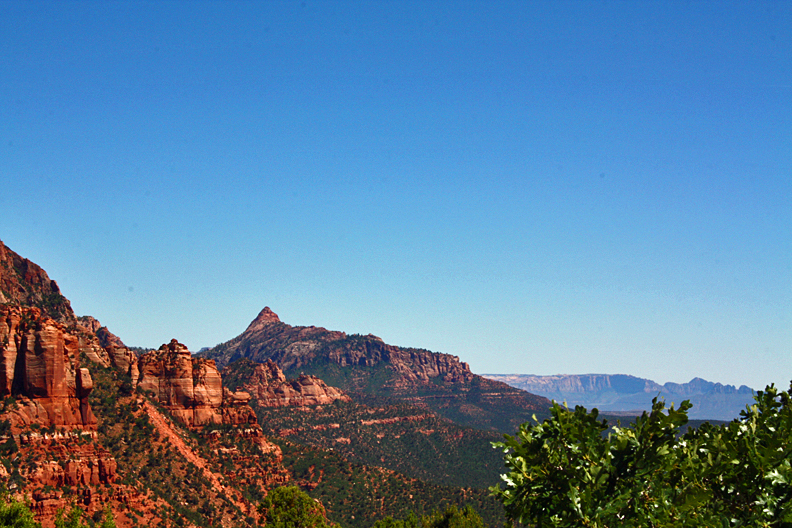 Finally,  this picture was taken at the  turn-around place at Kolob Canyon.  They told us that the light late in the afternoon (when we were there) was best for photography with a breathtaking view of the Kolob Terrace.   I think it was.   What say you?????

One thing that many people want to see at the Kolob Canyons is the Kolob Arch.  It is considered to be one of the longest natural arches in the world second only to the Landscape Arch at the Arches National Park.  Kolob Arch is 287 feet long and Landscape Arch is 290 feet long.  We didn't hike to see the arch (although it would have been a great hike).  I think I read that it takes about 14 hours round trip!!!!!

Hope you can visit Kolob Canyons when you are in that area.  As I said above,  we'd love to visit during EVERY season.

Have a great weekend and I'll see you on Monday.
Hugs,