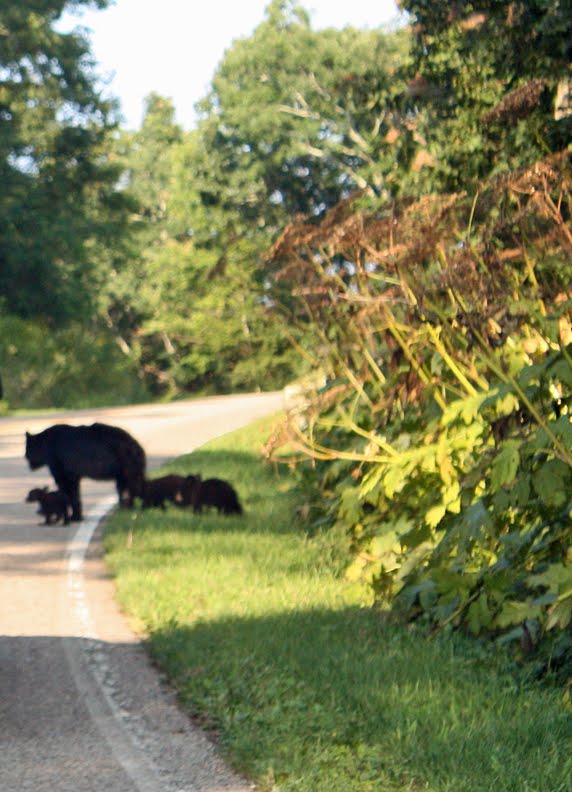 On my birthday trip (August 5-8), we enjoyed traveling along the Blue Ridge Parkway, and then on the Skyline Drive in the Shenandoah National Park in Virginia. While on the Skyline Drive, we had two encounters with Black Bears. Before you panic, let me say that we were never close --and were never threatened at all by them. SO---today, I'm sharing some pictures of these interesting critters.
Above is a picture of a Mama Bear and her THREE babies.... Aren't those little cubs just adorable???? Below are more!!!! 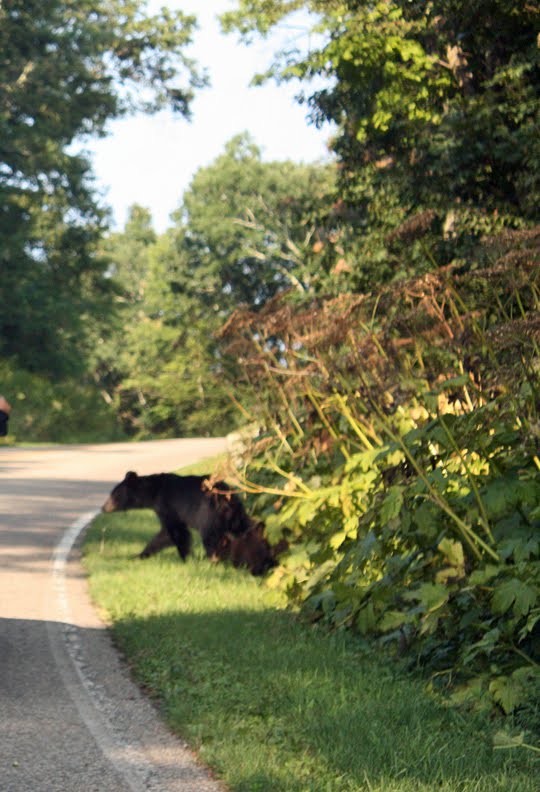 We were driving along the parkway south of Big Meadows at about Milepost 53---when we saw a Mama Bear trying to get across the road. 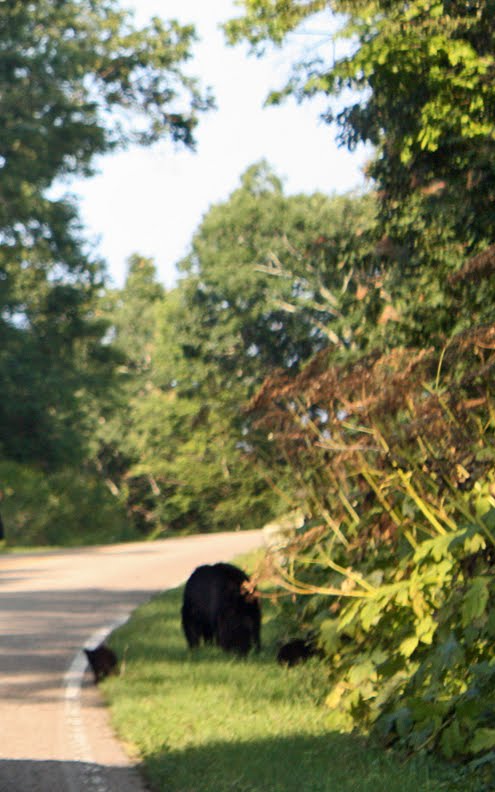 Now---we could see TWO of the little ones... While watching them, George heard some crying and squeaking out of his window (we were in the car). Here came the third baby across the road looking for its mother. He passed right in front of our car and hid down in the brush... Of course, I missed his picture when he was so close.... Darn!!!!! BUT--the next picture will show you that I did finally get him ---as he 'brought up the rear' --as the little family crossed the road. 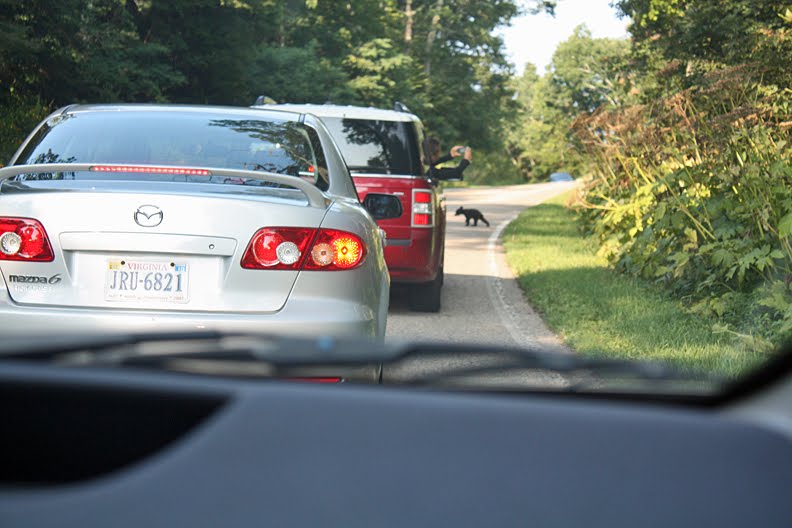 That little cub was hollering: "Wait for me!" Isn't he just adorable???? I didn't crop this picture (like I did the other three above) so that I could show you where we were. We were the third car in line ---and I was taking pictures through the front window. That is why these first four pictures are a little blurry. BUT--I'm just glad we saw them PERIOD.... I've NEVER seen three Bear Cubs together before... Have you????? 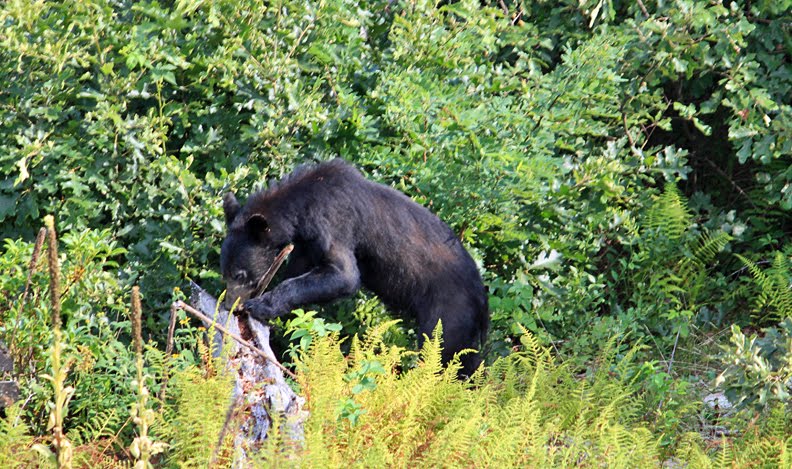 This young bear was seen by us before we saw the pictures above. We were at Milepost 92 near the Moorman River Overlook. We got out of the car to see what we could see---and low and behold, this bear was enjoying eating in the area below our overlook. He paid no attention to us ---and just continued to eat. 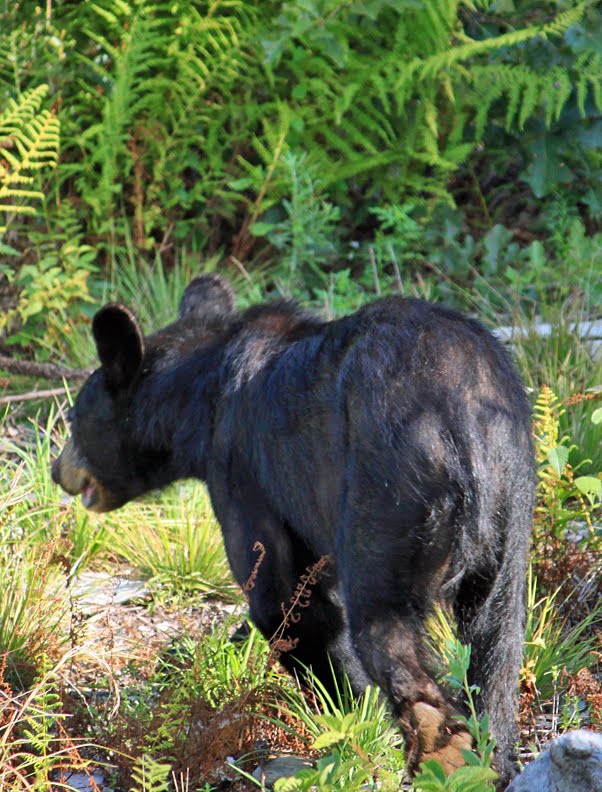 George quickly put the long lens on his camera to catch a close-up of this bear as he scurried on down the hill. I think he was alone ---or at least, we didn't see any other bears in that area.
Since most of us enjoy seeing the wildlife when we are out in nature, I would be amiss if I didn't say that we ALL need to be VERY careful. We do NOT ever need to get close or feed or upset any of our wildlife. We are GUESTS in their habitat.
Hope you enjoyed seeing our "Bear-Encounters"...
Hugs,