From Texas to Tennessee 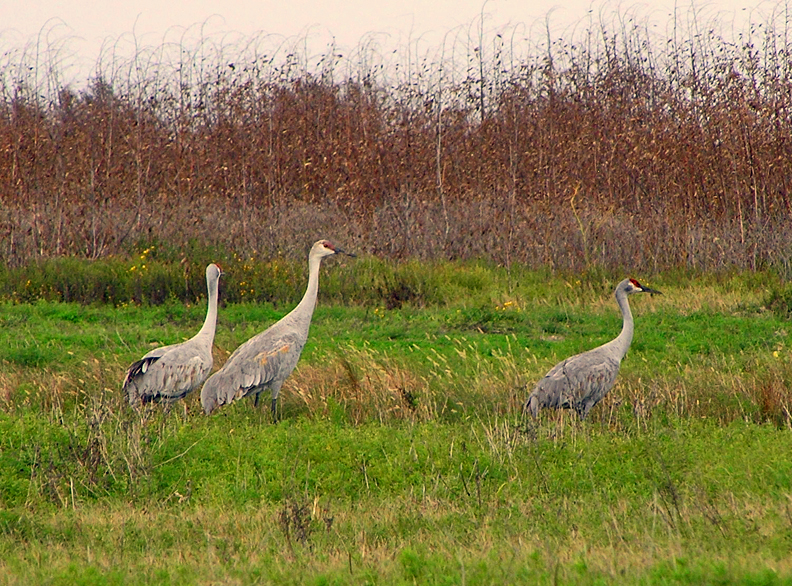 My oldest son and his family live in Galveston, Texas.  Last week, he called to tell me that he had seen some Sandhill Cranes ---which are wintering in his area.  He was so excited (just like I would have been) --and then sent me some pictures.  AND--of course,  I have to share them with you today. 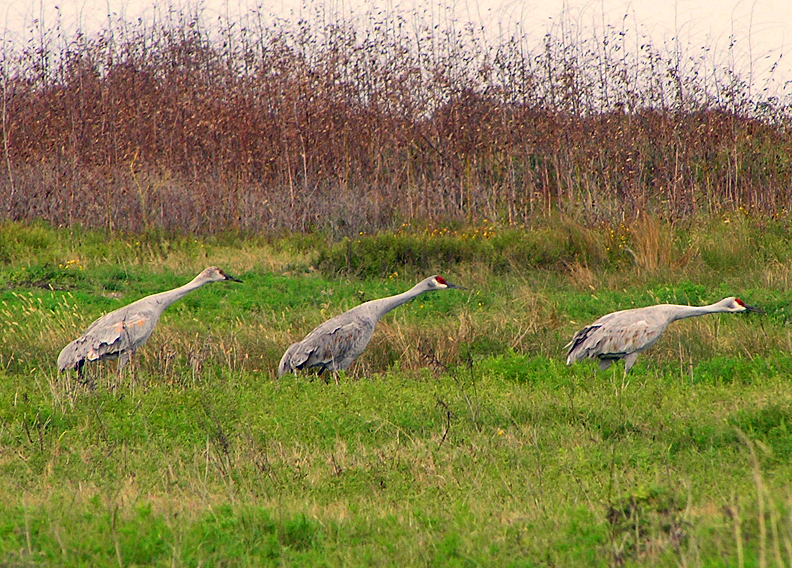 Of the 15 species of cranes in existence,  Sandhill Cranes are the most abundant and Whooping Cranes are the rarest.  These two are the only crane species in North America,  and both winter in Texas.

As bird species go,  Sandhill Cranes are ancient.  According to the International Crane Foundation,  a crane fossil from Miocene formations thought to be about 10 million years old was found in Nebraska and is structurally identical to the Sandhill crane,  making it the oldest known still surviving bird species. 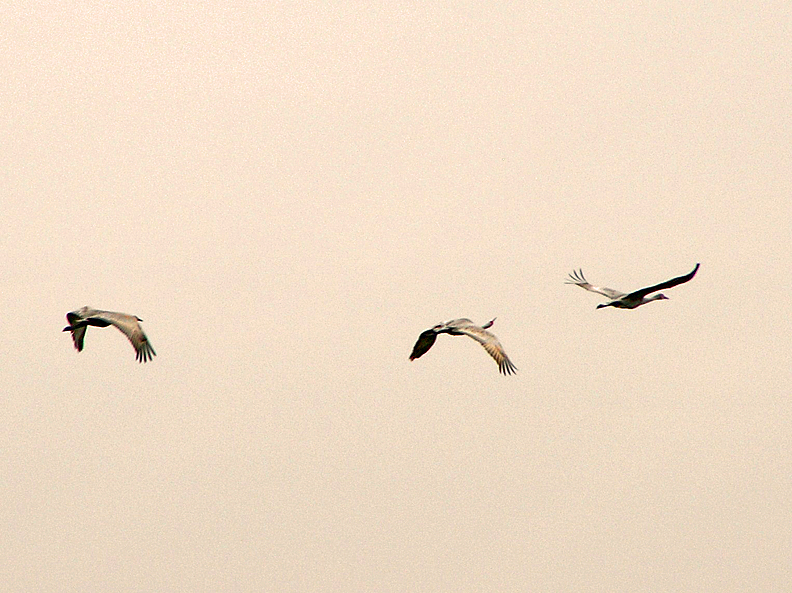 Male and female cranes look identical, but males are usually larger than females.  Smaller Sandhills average about 6-7 pounds and stand 3 to 3.5 feet tall.  The largest average 10 to 14 pounds and are 4.5 to 5 feet tall.   The lifespan of the Sandhill Crane is up to 20 years.

Thanks Bert for sharing your photos with us today!!!! 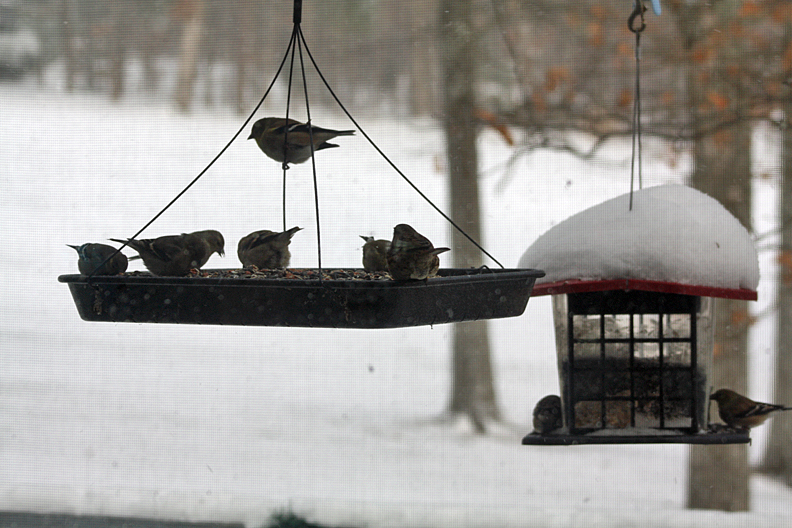 Well,   we don't have Sandhill Cranes in Tennessee,  but we do have lots of birds at our feeders when it snows.  I work hard at keeping enough food out for them --and they really enjoy it.  Sometimes,  there are as many as 30-40 little birds at the feeders during these times.  The one above just shows a few of them. 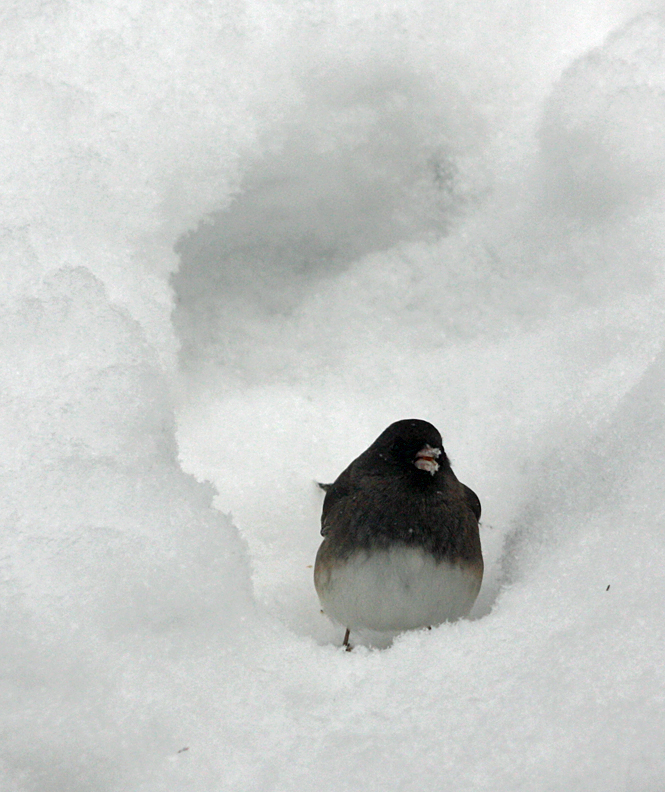 This cute little Dark-eyed Junco looks like he is burying himself in the snow.   I was excited to see him --since we have so few Juncos here. 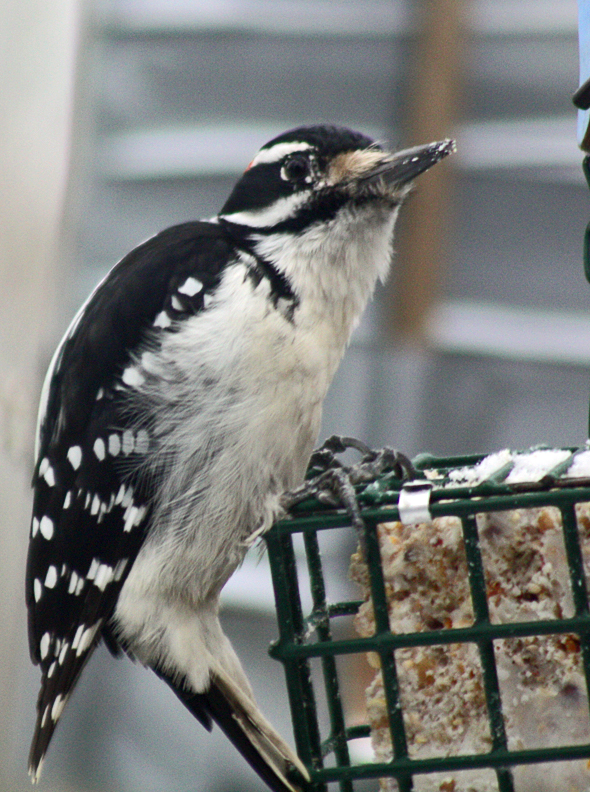 AND--here's another new woodpecker at my feeders!!!  This guy is a Hairy Woodpecker. The Hairys look alot like the Downys  but are much larger... Look at his LONG beak.  I was pleased that he came to the suet feeder. 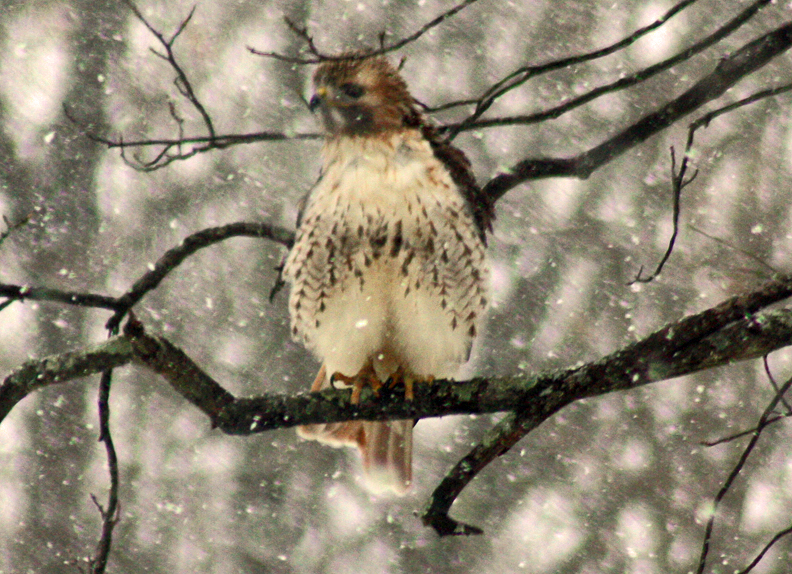 And finally,  here is a new bird I captured at a distance on Sunday morning.  When all of the little birds disappear quickly,  I know that there is a hawk around.  This is the first time I have seen him --and was able to get his picture using my long lens and then cropping it a little.  This beauty is a Red-tailed Hawk --and they are pretty --BUT I don't like them around my feeders!!!!!

Hope you enjoyed seeing some birds from Texas and from Tennessee.  I love seeing all of our birds here --but I'd LOVE LOVE LOVE to see a Sandhill Crane in person.  Wow!!! 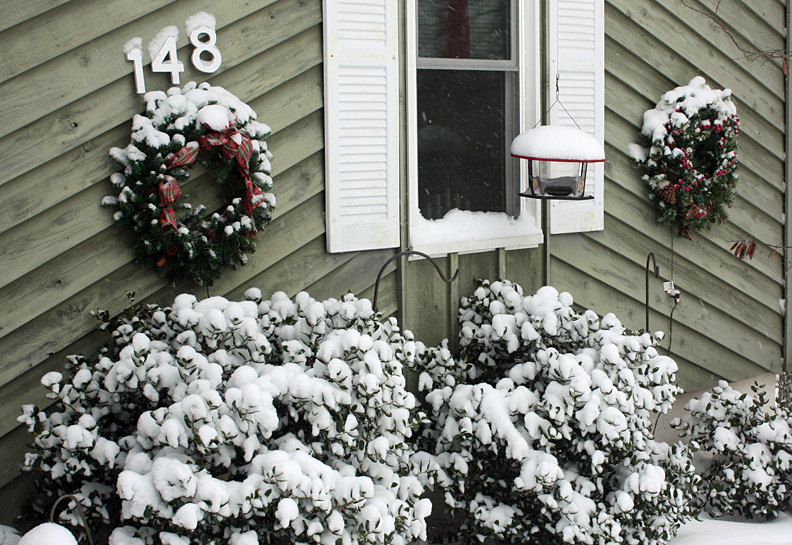 I 'must' show you another picture of our pretty snow.. We ended up with from 6-8 inches --so of course,  I took more pictures.  It was EXTREMELY cold though (wind chills below zero),  so we didn't stay outside very long.    The picture above shows two of our wreaths and the holly bushes --all filled with snow!!!

Have a fabulous day --and wherever you are,  stay WARM!!!!
Hugs,