It's All in the NAME 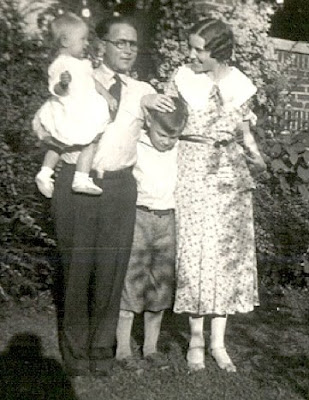 If you have ever worked on Family History, I'm sure you have found some help along the way IF there is a common name which runs through the family. That's why I think (even moreso now than when I was younger) that it's important to pass along some family names to your children. The two last names on my mother's side of the family were Bruce and Ballard. My parents named all three of us using one of the family names. My oldest brother was Raymond Edgar Banks (Edgar being my father's middle name); my middle brother was James Ballard Banks (using the Ballard side); and I was Elizabeth Bruce Banks (using the Bruce side of the family).
When I got married, we had three sons.. My sons' father was a Junior--so we named our first son the Third. He now goes by Tre. Our second son was named Mark Edgar (using my Dad's middle name), and our third son was Jeffrey Bruce (using the Bruce side of the family). IF I had it to do over, I would name one of our sons, Ballard... BUT--back then, last names were seldom used as first names (like they are today).
Today, however, I'm going to share another common name which runs through the Ballard side of my family. That name is BLAND. I can go on my Family Tree info --and there are at least EIGHT Bland Ballards listed through the years, and that doesn't count the ones with Bland used as a middle name. To me, Bland is very unusual --so I did some research (with the help of cousin Sue whose mother was a Ballard) and we tracked the word, BLAND, back to my Six Great Grandfather Ballard, Capt. John Ballard of Yorktown, VA (1693-1745). John Ballard married a lady named Elizabeth BLAND (1697-1751). Elizabeth's father was Rev. William Bland, who in 1791 was named Rector of St. Paul's Church in Norfolk, VA. That is where BLAND started we think---and it's amazing how many Blands there have been since then.
I enjoy Family History, and the internet has brought people together (like Sue and me) --who are researching information on their families. This weekend, I got another email from someone searching for Ballard information. She is searching for a William BLAND Ballard who was born in VA. I have been searching my information ---and I'll bet there is a connection somewhere. So far though, we have haven't found it--but we will keep looking.
Today, I will show you some old black and white pictures of my parents and brothers, and some of the Ballard side of the family---all taken in the early 1930's (before I was born--in 1942). Above is a picture of my parents and my two brothers (Ray and Jim). All four of them are dead now --and I'm the only immediate family member left. Below are more. 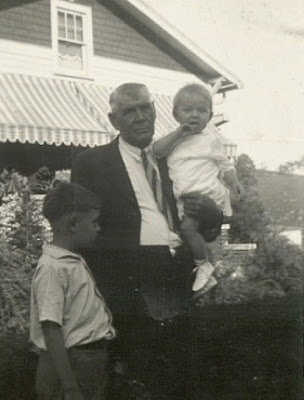 These are my brothers, Ray and Jim, with Grandpa Ballard (my mother's father). He died in 1936. (Mom's mother died in 1904 --when Mom was only 4 yrs. old. Her Dad remarried, but Mom didn't live with him very much throughout her life. She was raised by her Bruce aunts in Big Stone Gap, VA.) 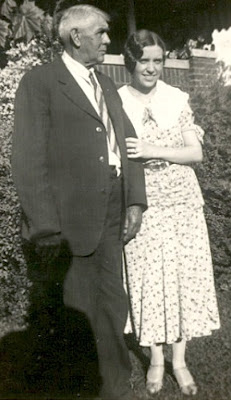 This is my mother (Edith Marguerite Ballard Banks) with her father, James Franklin Ballard. She lovingly called him "Papa". 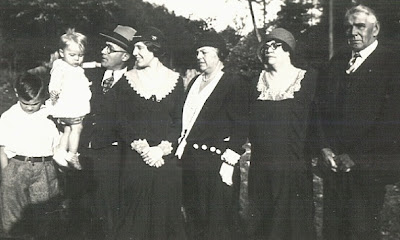 This picture was taken on a different day, but still in the early 1930's. Brother Ray was born in 1922 and Jim was born in 1930. Grandpa Ballard is on the right --and the two ladies in the picture next to him are his daughters from his first marriage. I think he was married three time. 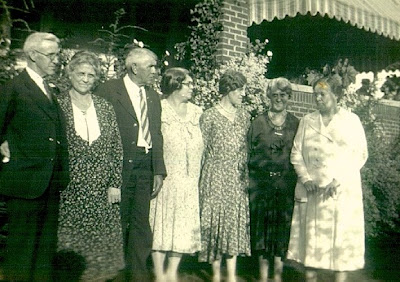 This is a picture of Grandpa Ballard's brother and sisters, his two daughters and his brother's wife. The one on the left is his brother BLAND Ballard. Bland is Sue's (listed above) Great Grandfather. I remember my Great Uncle Bland and his wife Myrtle. Bland was the City Clerk and Auditor of Bristol, VA for 31 years. He died in 1951 at the age of 77. Bland had a son, also named Bland (but called Gene) who died in 1964. Gene was Sue's grandfather. 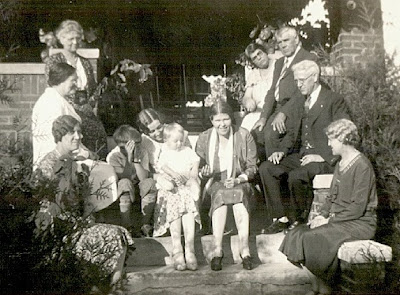 Here's one more picture of the Ballard Family ---taken about 1931. At one time, there were 10 children in this family. I only knew FIVE: Bland and four of his sisters (Nancy, Aileen, Eunice and Lura).
Hope I didn't bore you too much with my Family History. I enjoy working on it SO much---but it gets frustrating when I hit a "brick wall".... Luckily, because of names like BLAND, I found it easier with the Ballard family.
Have a great Tuesday.
Hugs,