My Blues are Makin' Babies 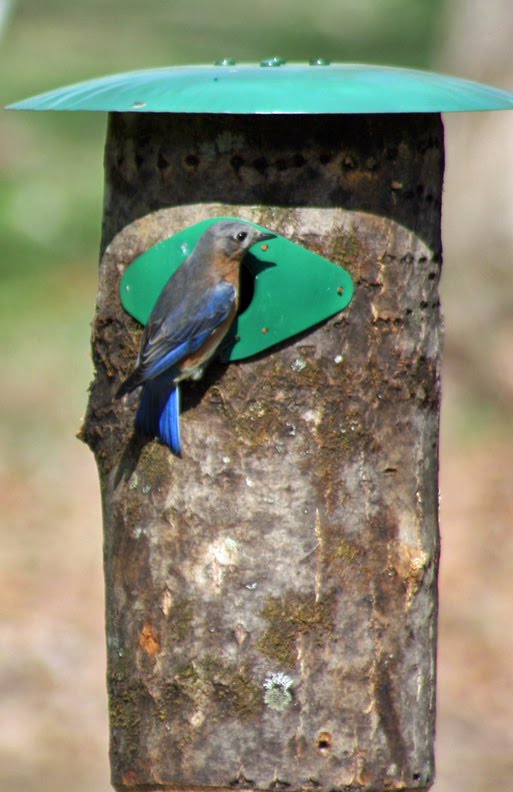 Oh My Heart!!!!! I am so very very happy!!!! Yesterday --while working in the yard, I noticed that Mrs. Bluebird was checking out the new nestbox in our backyard. (If you missed the post telling about our new Bluebird nestbox, click HERE.) At first I thought they were just checking out the new home---but as I continued to watch them (all afternoon--ha), I have a feeling that they have already done the deed, and there's a bun in the oven!!!!!!
I did not open the lid to check out the box YET---but will, when I get a little more curious. (By the way, Bluebirds do NOT mind us checking their nestbox and eggs. Some birds do--but not the Blues.) Anyhow --- the female kept going in and out and the male perched himself in the nearby trees --obviously protecting the nest.
SO--because the male was protecting the nest all afternoon (and chasing any other birds away --who may have gotten near), I think that the nest has been finished --and that there may even be an egg in the nest now.... Isn't this just awesome????
For your info, Bluebirds lay one egg a day --until they get to about 4-5. After that, the Mama incubates the eggs for 12-15 days. Once the baby birds (fledglings) hatch, it takes another 12 days until they are big enough to leave the nest. Last Summer, I was fortunate to see my first group of baby Blues leave the nest. SO EXCITING!
Bluebirds have 2-3 broods per year. The ones who are born in the first brood usually leave the family in Fall and strike out on their own. The ones from the last broods may stay with their parents all winter before making a life of their own.
Today I will share with you some pictures of the bluebirds in my yard YESTERDAY... The good news is that this year, I have a better camera and a long lens to use. Above is Mrs. Blue---at the nest. Below are more. 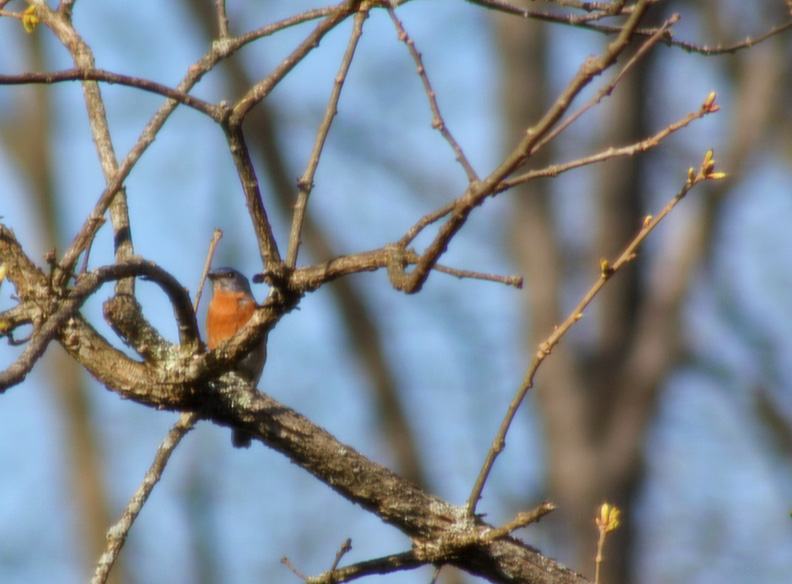 I followed Mr. Bluebird as he sat close to the nestbox --in one of the nearby trees. 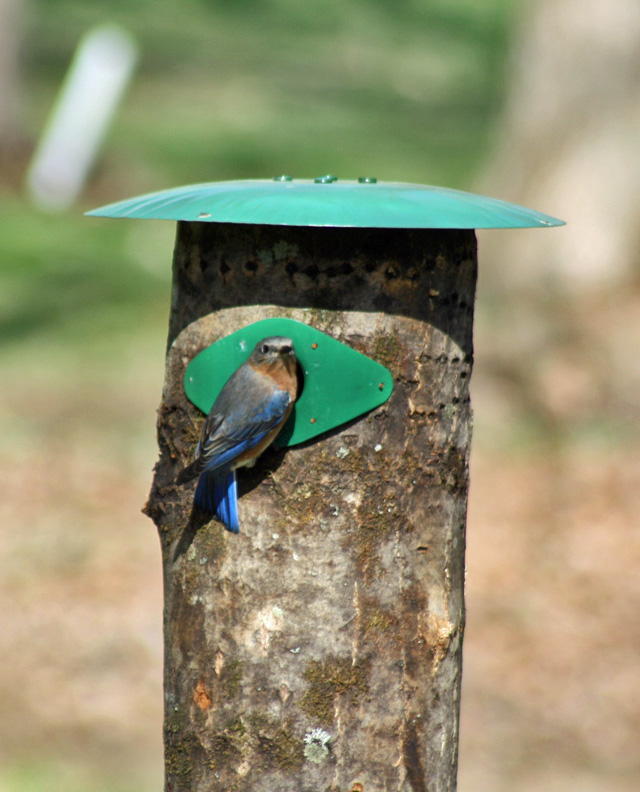 Mrs. Blue looks at her Sweetheart before going into the nestbox. 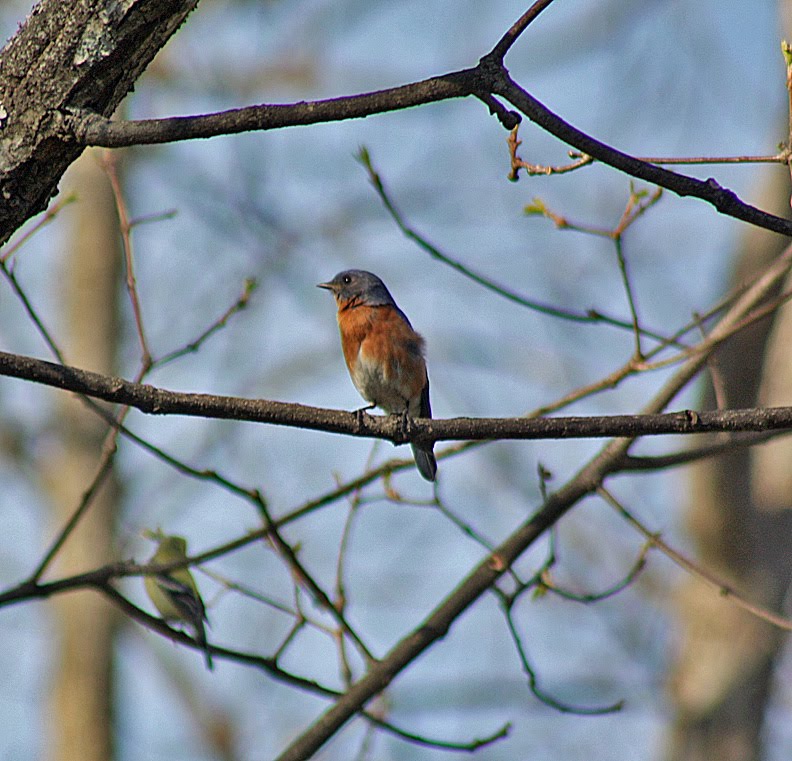 I love this picture of Mr. Blue--watching his nestbox. Can you see the male Goldfinch in the distance??? Mr. Blue wanted to make sure that the finch didn't stop by for a cuppa tea!!!!!! ha 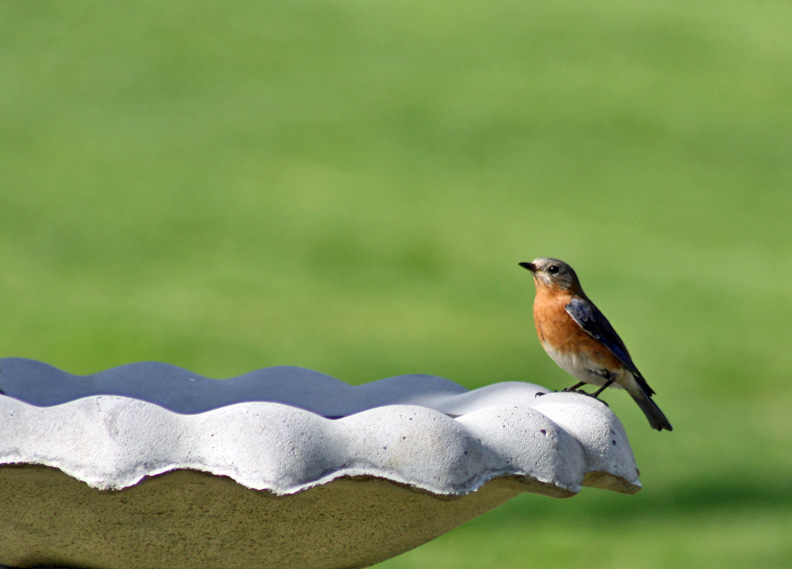 Every once in awhile, Mr. Blue went to the birdbath for a drink of water... BUT--he still kept his eyes on that nestbox!!!! 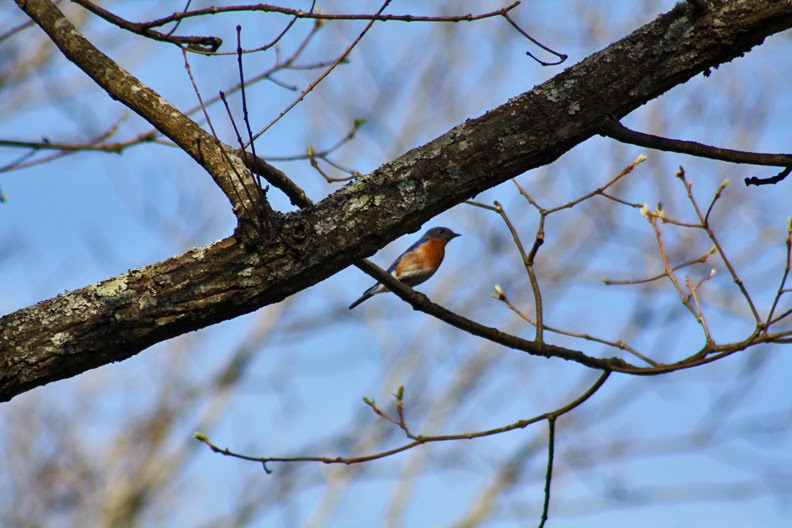 Sometimes, Mr. Blue would leave ---but I'd find him in another nearby tree. 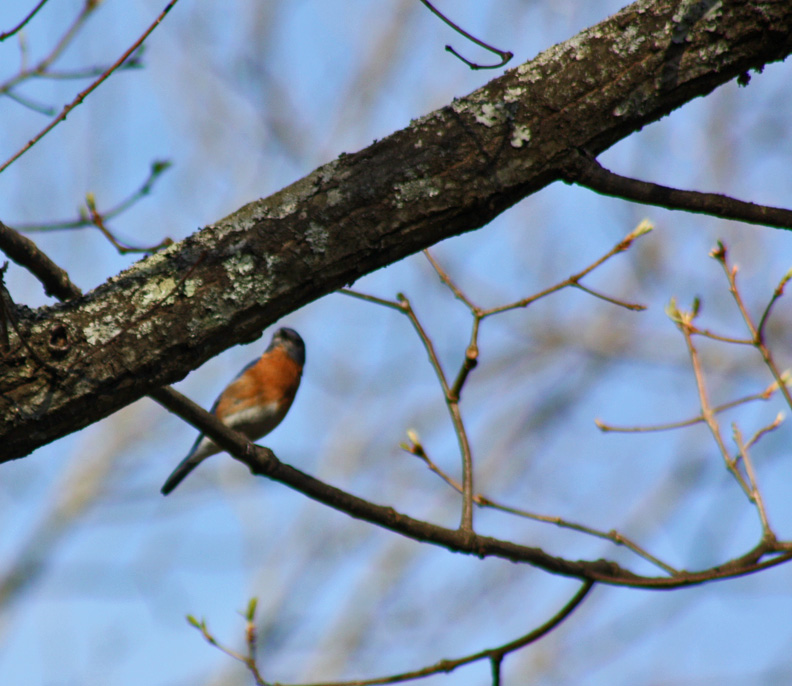 Can you tell that the trees are beginning to 'leaf'?????? Look at the buds on the ends (of all of the pictures of Mr. Blue in the trees). That means that it won't be much longer for me to be able to see the birds in the trees --once the leaves open. 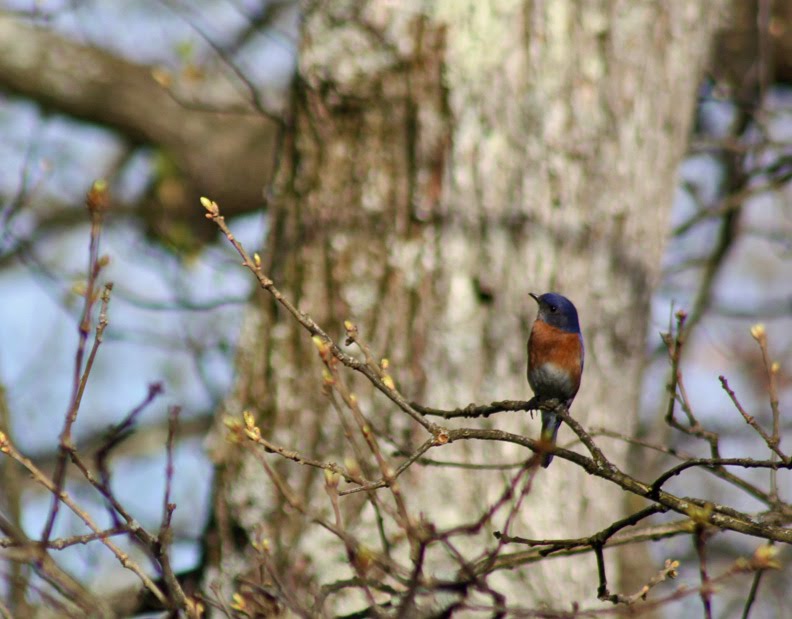 Mr. Blue had all kinds of places to sit and guard the nestbox. Every once in awhile (besides getting a drink of water), he would go to the feeders on the deck and have a bite to eat. 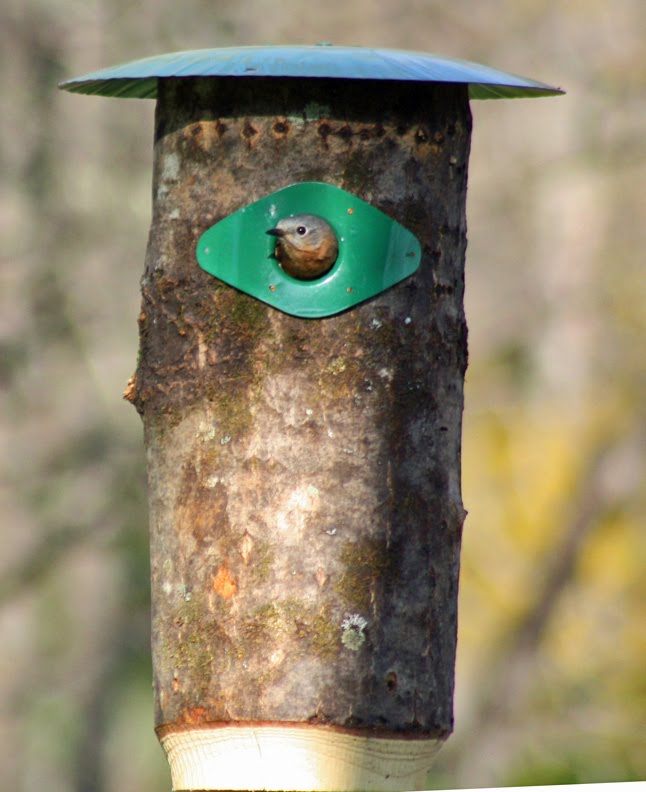 Here's one last picture of Mrs. Blue---peeking out of the nestbox, probably wondering if her 'man' was watching after her!!!!!
I'm sure I'll have many more posts about my Blues.... It's just SO SO SO exciting!!!
Hugs,

UPDATE: After writing this post, we found out that the Chickadees had taken the nest... I hope the Bluebirds do come back! This is just so SAD!!!!