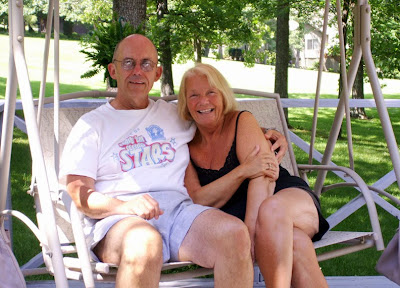 Betsy
06/16/2006
Well----at age 63, I guess I'm too old for this kind of endeavor!!! BUT--since I absolutely love to write, I'll give it a shot!!!! My friends know that I can write an email and go on and on and on about 'little' insignificant things!!! But since that's my life----I love telling people what I'm doing and what I've done (even if they don't give a flip!!!! ha)...
Anyhow---I'm going to try this 'blogging stuff' and see what happens!!!
(A whopping TWO comments)
++++++++++++++++++++++++++++++++++++++++++++++++++++
Today is my 4th BLOGAVERSARY. I started blogging on June 16, 2006 ---with that exact blog above including that picture and that title...
I blogged almost every single day from June 16, 2006 ---December 30, 2008 on a blog site called "Lightblog". I chose that one because a friend was blogging there. I loved blogging ---and my family and friends told me that 'they' were reading my blogs. I was never sure though (still not) since very few of them would leave comments on my blog. Thanks to my great friend Judy for commenting every single day on my blogs back then.
After two years on Lightblog , I began to get frustrated and began to think that IF I really wanted to find new blog friends from all around the world, who enjoyed the same things I enjoy, I would need to change to one of the popular blog sites. I finally joined Blogger in October of 2008, but kept using Lightblog until I changed to Blogspot on December 31, 2008.
During that couple of months toward the end of 2008, I began visiting other blogs beginning to find new friends across Blogland. People struggled trying to leave comments on Lightblog --but they tried... Any of you remember that? Then, on December 31, 2008---I wrote my first blog on Blogspot --and quit Lightblog. That first post on December 31 had 24 comments: 16 were blog friends and the rest were me, thanking them for commenting. Out of those 16 people, there are 10 of them whom I still hear from .. Isn't that neat?? I feel as if I have friends for LIFE.
I'm sorry to say that Lightblog is now GONE---just disappeared, but I do have hard copies of all of the blogs I wrote back then. I think I wrote about 850 posts while on Lightblog. I used to write a post everyday --even when I was on vacation. I don't do that anymore --but I still try to write a post during most every weekday, except during holidays. Blogger says that I have published 438 different posts since starting Blogspot. SO---I guess (during the past four years), I have written about 1288 different posts. AND--even after all of these posts, I still haven't run out of something to say. Did I say that I like to WRITE????? ha ha
My thoughts about Blogging:
-Giving and receiving COMMENTS; That's the most important part to me. I find that the people I hear from most every single day are the ones who have truly become great friends. And I enjoy emailing with many of them also.
-Having alot of Followers is NOT that important since people who read but don't comment are not my real blog friends. There are TONS of my followers whom I don't know at all. That's sad I think.
-Finding people with 'like' interests is special (Family, Marriage, Hiking, Waterfalls, Being Outdoors, Flowers/Gardening, Birding, Genealogy, Photography, etc.). It's fun to know that there are people out there who love the same crazy things that I do!!!!!
-I am drawn to blogs where the person has something to say and show. I love stories about life, and I love photographs --when I know what the photograph is all about. I struggle with blogs where someone posts a thought or a picture which makes NO sense to me.... I guess I NEED the explanation!!!! ha
SO---what do you like best about Blogging????? People who don't blog don't realize what they are missing... I LOVE LOVE LOVE it...
Have a wonderful day on my Blogaversary!!!! I have a doctor's appointment today about my KNEE.... Wish me luck!!!!
Hugs,